Last Saturday it was finally my turn to be the shooter, or so I thought. Kara and I hiked up a ridge where we had seen some elk the night before. We didn't see any elk near us but did spot a nice bull still with some cows about 2.5 miles on the other side of the road. They were miles from any trees so I decided to try and boogie up there to try and see if I could catch them... but on the way back to the road, we ran into a couple of cow elk. They were only a half mile from the road, and Kara still had a cow tag in her pocket. It was just too good of an opportunity to pass up, and she killed her second elk of the year.

I've never got an elk out in one piece, so after last week's wonderful thread discussing how to pack out elk, it convinced us that it was totally worth it. haha.

It was super easy to drag out over rocks, having the sled almost take us out sliding down the hill and having to use a pulley system/sagebrush load it in the pickup...

Anyways, after we got her cow loaded, I hiked up to where the bull had been, waited till dark but, never saw him again. We decided to drive to a different spot and hike in to see if the bull had moved over. When we woke up, it was sleeting pretty hard. I checked the forecast and they predicted it would stop in about an hour, so I was lazy and just stayed in the pickup to wait for it to stop. Awhile after first light we spotted two cows about 100 yards off the road, they spooked, but I walked over there and found a third track of an un-spooked elk. I followed it for a ways and it too eventually spooked, I happened to glance up and noticed a smaller bull about 500 yards away walking straight towards me. I laid down on the ground and waited. He went in to a small patch of trees and took aim where I expected him to come out. Ten minutes later I heard a noise to my right. I looked over and and the bull was standing 50 yards away straight on, no clue how he got there, I must've been sleeping. I swung over and sent 250 grains of lead his way. I whiffed on a second running shot, but he piled up 20 yards later. Not a big bull, but only having weekends to hunt I wasn't about to be too picky. 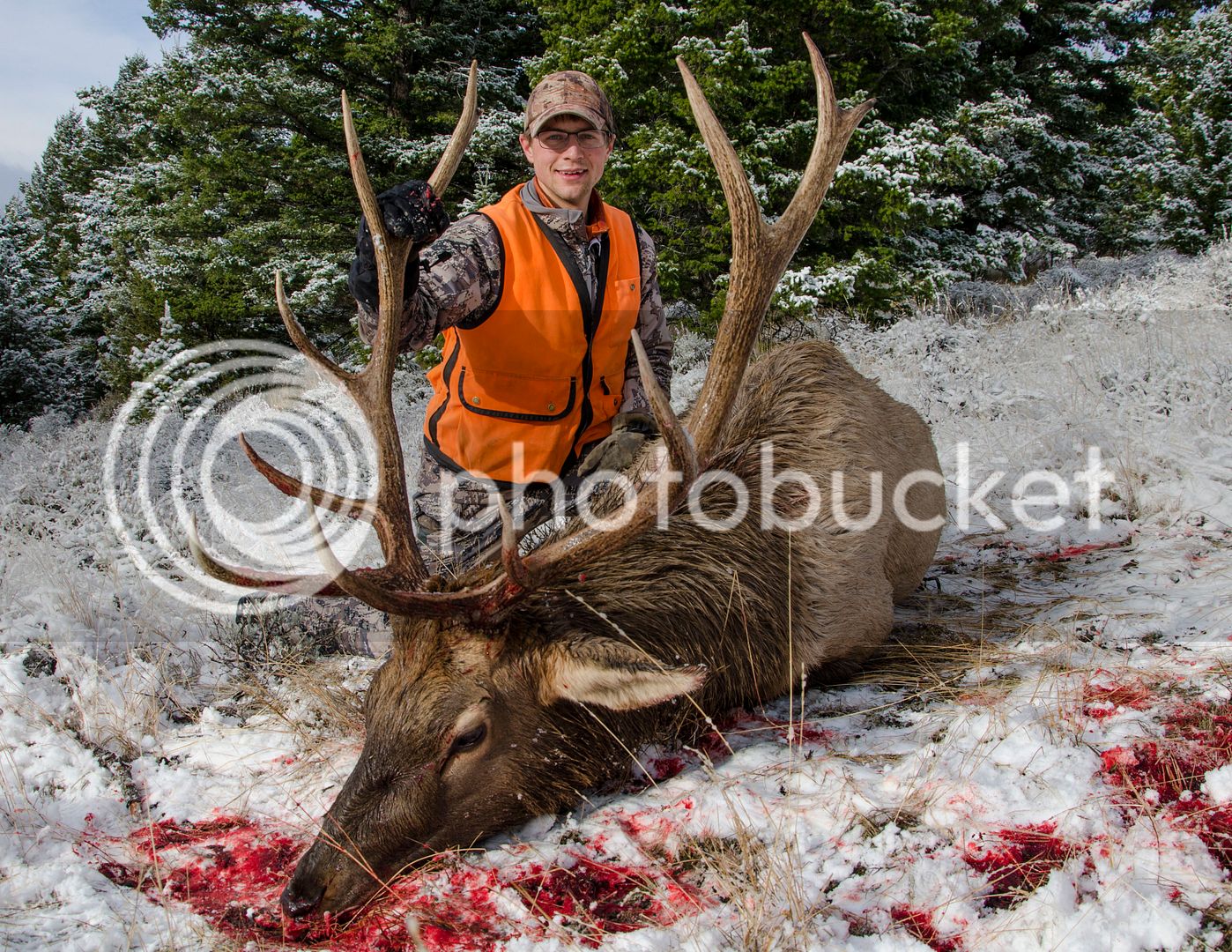 Good work, always nice to see a couple getting it done.

I wouldn't complain about that!!

Really nice animals. Enjoy some fine eating and your trophies.

Congrats on a good looking bull!

Wish I could be lazy and shoot nice animals like that. Awsome to see you and your lady getting it done. Someday maybe i can convince my wife to hunt out west. Congradulations.

Great job, I wish my wife and I had done more stuff like that b.k.....before kids
R

W, great to see you both enjoying
R

Way to go, great to see you both enjoying the outdoors. Thanks for the story and pictures.
S

Good job on filling your tags! I would be happy with that bull! Getting out an elk whole is always a good process. I've done it with two cow elk in the past, including my first one. It kinda spoiled me. Full freezers mean you'll eat well this year.

Congrats on all your success.

Congratulations to you both, awesome job.

Great result, did you get the bull out whole?
Cheers
Richard

Any Woman who can pack her own elk out... is OK with me. Don't ever lose her

Awesome! That's a GOOD couple of days. Congrats to the both of you.

Dang. Well done to the both of you. What a great trip.
You must log in or register to reply here.

B
Amazing success on our first WY Elk season!!
2