Anybody ever hear of a coywolf? It's a coyote/wolf hybrid found mainly in eastern Canada but there have been some seen in New York. I didn't think that was possible because I have alway heard that wolves usually kill coyotes. 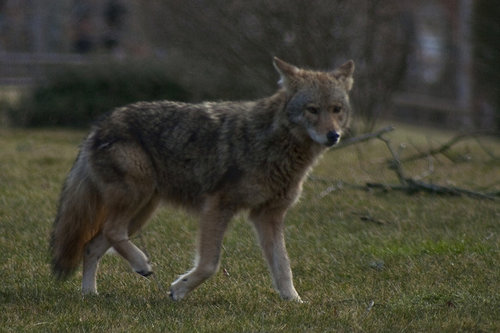 A Meateater podcast recently had a guest who recently released his book "Coyote". He made a comment about Red Wolf/coyote crosses creating such a creature. Smokey Mountains IIRC.

There are Red Wolf/Coyote hybrids in eastern NC.

What dogs they are !

genesis273 said:
There are Red Wolf/Coyote hybrids in eastern NC.
Click to expand...

But not in the Smokies. The red wolves were moved from South Louisiana/Texas coastal regions and placed on a large island in the salt marsh area of the NC coast but as could have been expected some moved off the island and are now crossing with coyotes. Now who would have ever imagined that they could swim???
Last edited: May 30, 2016
J

There is a PBS documentary about them (the coywolf). However, I think the term "species" may be a misnomer. Apparently there has been a shift in the biological sciences and canis lupus (wolf) and canis familiaris (domestic dog) are now considered the same. Canis lupus controls. In other words, the genes are identical. However, I've always felt that the wolf was greater than the sum of it's parts. It is no dog. But I'm a philosopher, not a scientist.

Any biologists on deck?

We just had this discussion on another forum here in Va. Some guys swear that eastern coyotes cross with dogs and others say they already crossed with wolves. People I respect say that eastern coyotes are larger and more variable in color due to environment and food supply. The red wolves cross readily with coyotes when there are limited numbers of reds to mate with. They are of similar size and habits as I understand the situation in NC. I think they may be in the dismal swamp area of VA too.

There was a guy a few years ago giving talks about hunting eastern coyotes. He claims his largest coyote to be 80 lbs and genetically tested pure coyote. I think the size of eastern coyotes makes people make assumptions on why they are so much bigger. I guess I am not sure either way but I need to see more evidence to convince me of the coywolf theory.
J

I have heard that coyotes in Yellowstone were bigger and more inclined to "group up" before the wolf came back. Now they are smaller and more single or pairs. Makes sense that if you take "top dog" out of the picture, small dog will start to step up and try to fill the niche. So, where there are no wolves, coyotes may very well get bigger and more social. I know I've seen them run healthy deer around here and take them down in the snow; four and five coyotes together.
Last edited: May 29, 2016
J

Switching to another "species". I saw somewhere the other day that polar bears may be starting to cross with grizz.
T

I would love to see an "80 pound" coyote on a scale. My guess is most are field weighted.

There is a lot of fuzzy understanding around how all the canids are related. New genetic techniques have shown us that they have been interbreeding periodically pretty much forever; sometimes naturally and sometimes via selective crosses by humans. For example, the canine gene for black fur was selected by humans after dogs were domesticated. It did not exist at any prevalence in wolves (who share a common ancestor with dogs but we now know are not direct ancestors of them) until those domestics bred with wolves (we're talking ancient history here, not long after domestication began). Dogs, wolves and coyotes are all closely enough related to breed and produce fertile offspring. Those offspring will then usually back cross with one of the parent types, over time diluting the cross but maintaining some new genes that apparently convey some sort of selective advantage in the population. Coywolves are unusual but probably not as rare as people think, and are likely a result of an animal not having access to a mate of the same species for some reason- maybe a social outcast, maybe limited population size. Either way, these crosses would not be considered a separate species. Just hybrids. If those hybrids turn out to be selectively superior than the parent stock and outcompete them, then you may see speciation occur.

And yes, polar bear/ griz crosses are becoming more common as ice pack shrinks and polars are restricted to land during the breeding season instead of being out to sea.
M

I've read that almost all yotes in the NE USA have some wolf dna.Don't know how true that is but would make sense with the size of our yotes almost twice as large as the western ones.Plus all the color variations.Think its a fact that they have been known to breed with dogs.I've seen some yotes that look more like dogs then yotes over on trapperman.Some of which I'd have a hard time killing thinking they may be someones dog
C

Heck, humans have been interbreeding since at least as far back as the neanderthals. I would assume canid's would too.

tjones said:
I would love to see an "80 pound" coyote on a scale. My guess is most are field weighted.
Click to expand...

He had no verification but said he hit it with his car. Largest he shot was high 70's. Which I have seen equivalent yotes in taxidermy shops. My only and largest was at 52 not dressed. I thought he was a young doe when I first saw him. Was to tight to spend the money back then but wish I had tanned him. Smelled like rotten guts! Eastern coyotes may be the only animal I truly HATE, I can always relate to guys who dislike wolves. Sad part is, I live to see wolves when we are vacationing.
T

What would you guess this male weighed? 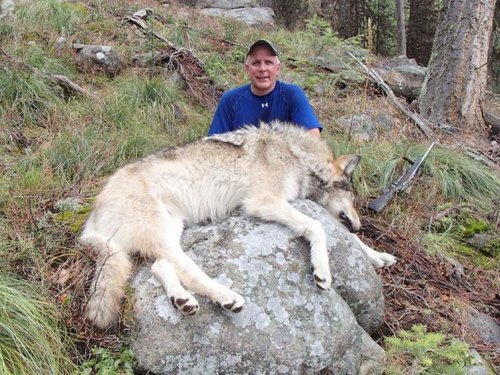 tjones said:
What would you guess this male weighed?

Don't have a guess but what a dandy. Look at the paws on that sucker! I'm guessing this was a trick question. What was the weight?

I'll have to look the guy up again. At the time he was doing the seminars he had just joined on knight and hales pro staff. If he is still onboard I'll try to get particulars on his stories as far as truth or exageration. He was from western PA, and claimed to have killed or trapped about 100 a year up to that point.

Just for reference, I'm just retelling his stories. I have no verification of truth.

The guys name was Tom Bechdel. I was wrong his bio said the largest he killed was 72, not high 70's. He told us the big one he hit with his car. I came to buy into what he was saying on the differences in behavior between east and western coyotes. Maybe it was all b.s., but I have never heard anyone else even have an inkling of knowledge on the habits of eastern coyotes. I think he has a book and I'm not sure if he is sponsored by anyone.

He really liked using decoys with a fawn bleat. He would keep a log of all the possible den sights where he could hunt and then hunted them when the wind was right. He used a coyote locator howl for this but claimed in the east, the coyotes rarely come into a howl. He never called at night and did most of his shooting with a 20ga at close range to the decoy. It was a fun seminar and he was a good speaker.

Back to the o.p. At the time he claimed none had any dog or wolf dna, but perhaps the testing was not as advanced as it is today likr hunting wife wrote.
T

87 pounds, spent the best part of the day packing it out while so I could put it on a scale at a packing plant. This is why I raise an eyebrow when I hear of these huge coyotes that probably never touch a scale.

Back to the op, I have heard of supposed dog/wolf cross and that's why there are 200 pound wolves now in Montana. Total BS. When wolves and dogs meet its not for breeding.
Last edited: May 30, 2016

tjones said:
87 pounds, spent the best part of the day packing it out while so I could put it on a scale at a packing plant. This is why I raise an eyebrow when I hear of these huge coyotes that probably never touch a scale.

Back to the op, I have heard of supposed dog/wolf cross and that's why there are 200 pound wolves now in Montana. Total BS. When wolves and dogs meet its not for breeding.
Click to expand...

Deffinitely don't blame you for skepticism. I certainly can't say that its fact. But I do know this, that is one awesome coyote. If you don't mind saying, what state or area did you get him?
T

That coyote is a Montana wolf.
You must log in or register to reply here.

Who here lives and hunts in New Hampshire or other parts of New England?
2