Or maybe it should read "5 Really Friggin' Cold Days in the Big Sky", or "How Many Freaking Elk Can Be on the Valley Floor?"

Anyway, I loaded up the Ram, chopped a bunch of firewood for my family that was without power (and would be until after I got home), and hit the freeway. I survived ice, snow, and 4WD over Homestake Pass. I reached Destination Unknown at 0130 hours, got four hours of sleep, and took the Model 70 for a walk.

Elk were everywhere on the valley floor, but not so everywhere where the public could reach them. I saw a dozen the first day that were way the hell up the mountain and too high for me to reach them before they timbered up. The winds and snow conditions weren't conducive to hunting them, so I left them be.

On Day 2 I tried a different area. No elk, but I caught this buck in the timber. I mouth bleat and he stopped at 80 yards. Big mistake as he got a ride on the Mystery Ranch Express. 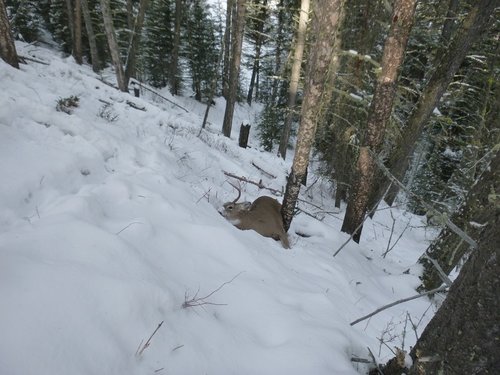 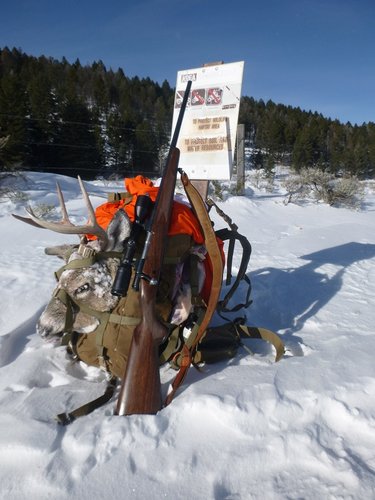 Later in the day I tried a new spot I'd never hunted before. I managed to get stuck trying to get to the parking area in an 18" drift. A little maneuvering and digging and I got out and was off. I hiked into this basin that felt like the North Pole. After thinking I'd never be warm again, I hiked out at dark. 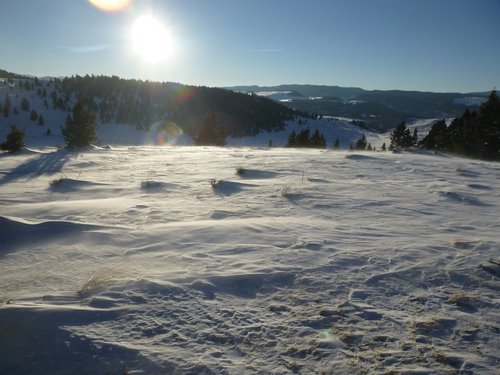 I caught this bit of the sunset and the oncoming full moon. I froze my ass off sleeping in the back of my truck as the mercury hit -5 that night. I ended up crawling up front and letting the diesel idle all night long with the heater on. 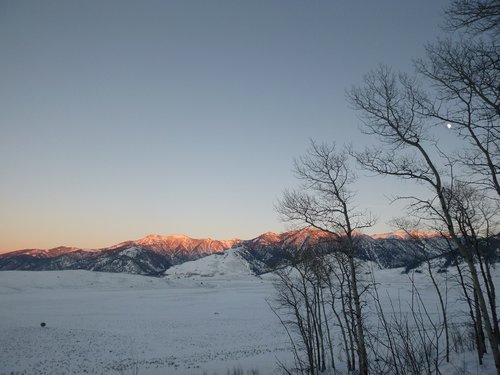 This is what the inside of a Mystery Ranch pocket looks like when your camera gets left on and fires repeatedly. 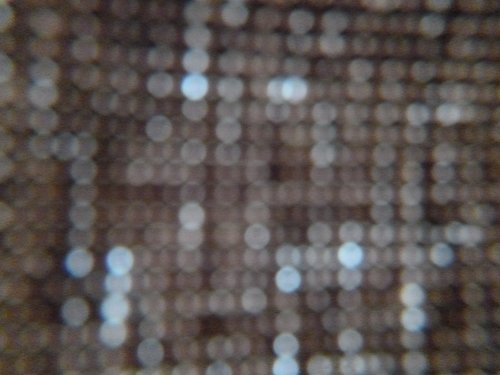 I went to a different spot on Day 3 that I hadn't hunted in many years. I got to watch a great sunrise. 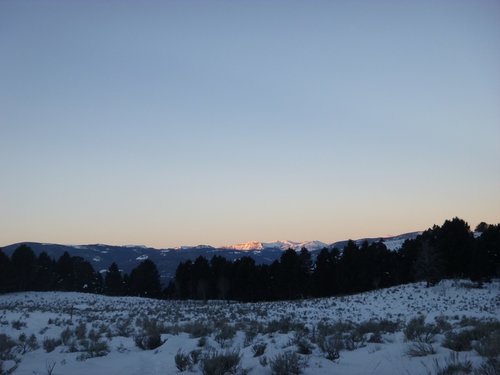 I saw a mountain goat at around 11k feet on a God forsaken ridge. Those creatures simply amaze me. I saw a stupid 4 point mule deer buck trying to get lucky with a rather aloof doe.

I ran into tons of people, to my dismay. I couldn't believe the pressure this area was getting. The most surprising thing though, was late in the afternoon I was sitting on a ridge glassing. I saw two hunters walking towards me. Lo and behold, it turned out to be two 20-something coeds from Bozeman.

We visited a bit, and one of them lamented the fact that she had too much fun at the Cat-Grizz game and they got a really late start that day. They asked me to take their picture so they could prove to their friends they went out elk hunting, which I did. I pointed them in the direction they wanted to go to the trailhead. I absolutely love seeing non-traditional style hunters in the field, as it give me hope for the future of hunting. 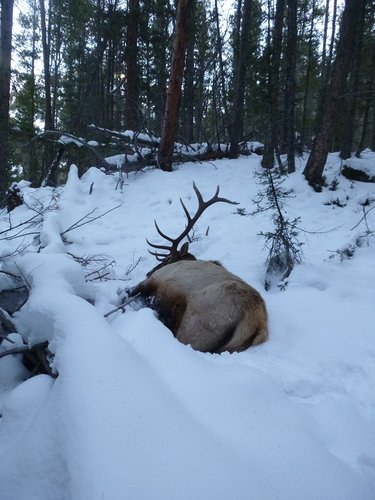 I walked around him and he looked like this. 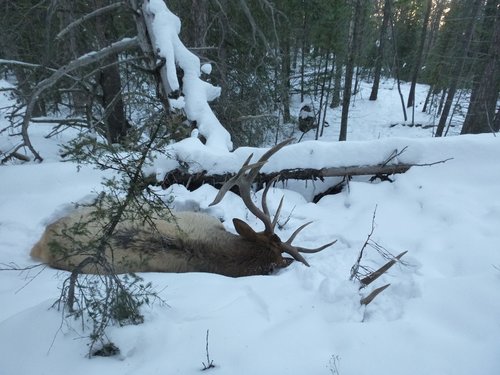 I was stunned. I was somewhat emotional. I was thankful.

I didn't have trailcam photos of him. I didn't name him. I didn't scout him all summer. I simply followed the advice of a very good and generous friend and kept the wind in my face while going slow.

I didn't have a posse with me, so I had lots of work to do. I found this in him. 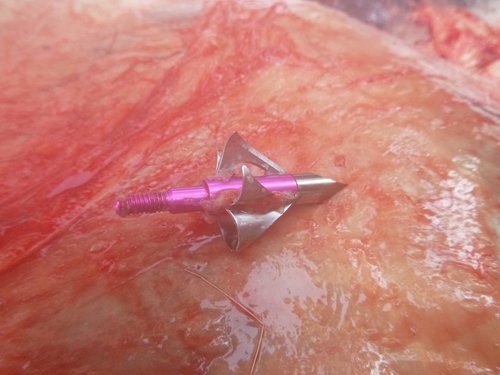 Of course, I've seen a number of animals with jaws shot off, but I obviously wasn't as smart as Mr. 300 Yard Head Shot. I passed him on the way back in. As I was moving the antlers to load the two front shoulders, Mr. 300 Yard Head Shot walked by, looked over and said nonchalantly "that's not a bad rack." I smiled and said "no it's not".

After five trips I had one of these. Who cares if it's 10 AM? 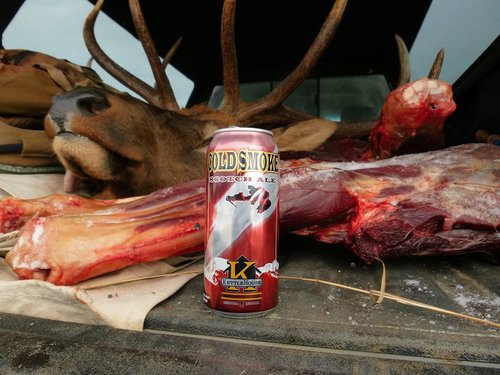 Did I forget to mention I love sunrises? 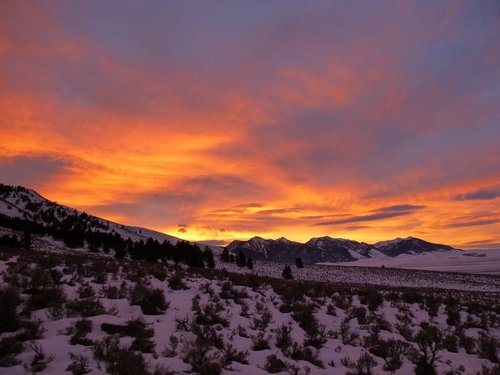 Amazing bull. Congrats buddy, it definitely sounds like you earned it this year.

What a trip. That bull is beautiful, and he no doubt broke some bow hunter's heart with that broad head in him. Well done and congratulations!

Great hunt. Glad you made such a great trip of it. Congrats!

Well done. A lot of that country looks familiar. Nice choice of beer as well.
S

great ending to your elk encounter

Where was the broadhead buried?

Wow what a great season! Tell me more about the broad head. Where was it? Infected? Looks like some lady must of felt bad losing that bull based on the color of broad head possibly.

Poke 'Em said:
Where was the broadhead buried?
Click to expand...

Lawnboy said:
Wow what a great season! Tell me more about the broad head. Where was it? Infected? Looks like some lady must of felt bad losing that bull based on the color of broad head possibly.
Click to expand...

It was in the backstrap, next to the vertebrae. No infection, but it was completely encased in scar tissue.

Wow. Great trip. Is your back still sore? Congrats! I can't believe that anyone would use that broadhead for elk.

Gerald Martin said:
Is your back still sore?
Click to expand...

Gerald Martin said:
Wow. Great trip. Is your back still sore? Congrats! I can't believe that anyone would use that broadhead for elk.
Click to expand...

From what I've seen they fly like crap after 20-25 yds. Wouldn't be my pick either
T

I can here the bow hunters story -" I'am not sure what happened, I hit him perfect, just a little high. Probably in that void."

What a great hunt. Thanks for the pictures and story. Great beer choice too!

Couldn't ask for a better hunt. well deserved.
I feel sorry for people that are still in bed at sun rise. Best part of the day.
You must log in or register to reply here.