Well, I finally did it.........I actually hunted whitetail deer. It's been on my bucket list to do for a few years now, but for some reason I've always veered back towards the mule deer. Well, after getting an invite from a good friend that I know from Pope & Young, my buddy and I (Ed Fanchin-P&Y Records Chairman) drove to western Kansas to meet up with our new hunting partner at his house.

After getting a tour of the area and vastness around this region, we looked for mule deer, as our buddy had a tag. After not seeing anything worth stalking, our buddy asked if I wanted to stalk or sit in a stand. Since I've never sat in a stand, and I wasn't too familiar with the terrain features, I settled for the stand. That afternoon, I sat my very first sitting in a tree-stand. About 10 minutes before dark, this P&Y class 10-point (eastern count) came by my stand at 22 yards. One arrow through his heart did the trick, as he only went a short distance. I'm told that he's fairly wide for a whitey, as he taped 21 3/8" wide? I was really pumped, as it's not only my first whitetail, but he should also exceed the minimum for the P&Y records program. VERY lucky to have a friend who knows what he's doing!

The next morning, it was Ed's turn. He arrowed this nice buck at 25 yards as it came by his tree-stand. After waiting a few minutes, a doe came by and he filled that tag as well. In just over 12 hours, both of us were done! An unbelievable hunt that was fun and wouldn't have occurred without Matt's hospitality (thanks). I love mule deer, but I could get used to this whitey tree-stand stuff! Hope you enjoy.

Ed's Buck with the 'recovery' crew:

Congrats to the both of you on getting very good bucks! Well done!

Congrats on your Midwest hunt! I can't see the pics, but the width sounds impressive. Good job!

I can't see the pics either, but the hunt sounded like a fun one and the deer sound impressive. Congrats!
I'll check back and hope the pics are working later.

Not sure why the pics won't come up.....how about now? 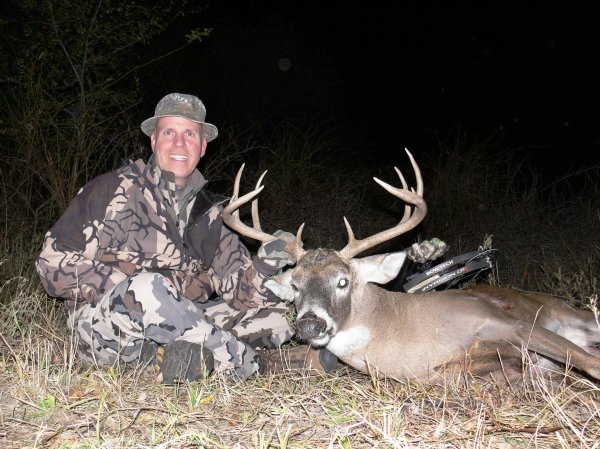 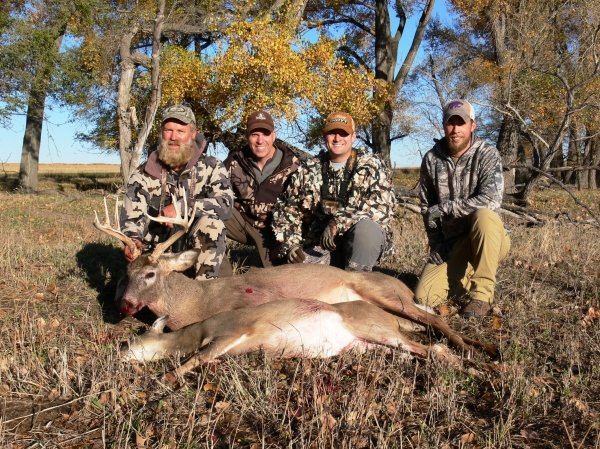 Way to go, it's hard to beat whitetails in Kansas. I like your Kansas friend's cap.

Well your 1st sure is a beauty!!

congrats!!! You look the same year after year (never age)

good luck to all
the dog
B

Two great bucks to be very proud of. Congrats

Great bucks for sure, congrats.