Been off for a bit, been very busy with work and life.
I was lucky enough to draw a Montana Goat tag after years of applying. Been putting in since 92. Finally drew, and in a decent unit. Well, with most of my free time going into learning the unit a bit more, helping with putting on the Total Archery Challenge in Big Sky, not a lot of time to pop in here.
Going into the unit two days before the season started, we had a few billies located. We were sheep hunting to having unlimited tags in our pockets too. So, it was sheep hunting and if we found a good billy, we would go for a goat. We did locate a ram that was way to close to call, but fun at the same time.
After two days of sheep hunting we switched gear to full goat hunting. Not able to locate the goats we had found four days earlier, we moved to the other end of the goat unit and packed back in. I was setting up the tent when this guy showed up. He was 1000' above us and 1 1/2 miles away from camp. We could tell he was worth a look. We watched until dark and then got up and relocated him in the morning. He had only moved a short ways.
He was bedded in clear view of camp, we made a quick game plan, took in landmarks and were off.
Now, I had no idea that the stalk would workout. It isn't supposed to happen like that. First goat you decide to stalk, and it all works out.
Well, it did. We got up to his bed in less than 45 mins, the last 200 yards took for ever. We were moving slow trying to relocate him. We reached his bed, and he was gone. My heart sank, mad at myself, thinking we had taken too long.
As we continued, we moved into an avalanche chute. He had been feeding in the same one the night before, so I looked up and down as we moved thru it. As I came around a small group of trees still left on the hill side, I looked up. There he was at 53 yards. I ducked back behind the tree I was next to, tell my buddy the goat was there. I nocked an arrow, ranged and drew. Then, I missed. He was feeding quartering away, had no idea...the arrow went low. I quickly drew, added yardage, and released. This one hit good, but he took two quick steps and stopped. So, I nocked another arrow, hit him again in the lungs. He ran over the ridge, blood pouring out.
We took our time finding the arrows, he broke the last one. About 15 mins later we picked up the blood trail, it wasn't hard. As we came over the top of the little knife ridge, we was across the draw on the next knife ridge. Still alive, we were getting ready to just sit and wait him out when he got up and disappeared over the ridge.
Now I have a lump in my throat, he was dropping towards the cliffs, we could loose this thing. I am questioning the shots, my mind is racing. We crest the ridge as fast as we could do quietly. He was already across the next avalanche chute and on the next ridge. Moving down hill, he had dropped about 300' vert so far in less than 150 yards.
He disappeared one more time before bedding again, just above a 90' drop.
I snuck down to 22 yards, but he bed in the only timber on that ridge, and I feared jumping him. He finally got up and moved over toward the cliff dropping on the shelf, I quickly ran to the cliff, looking down, he was on a ledge 20' below me maybe 8 yards with the cut. I drew and put another arrow in last rib and it hit his off shoulder. He took off around the face. Finding the only tree he could, he died against it...that is all that kept him from falling off the cliff. I got down to him as fast as I could and held on to him until my hunting buddy got down to help me pull him on to a ledge we could cape and butcher him on.
He ended up 10 1/2 years old and will go right around 47 6/8" very happy.

Here are some pics 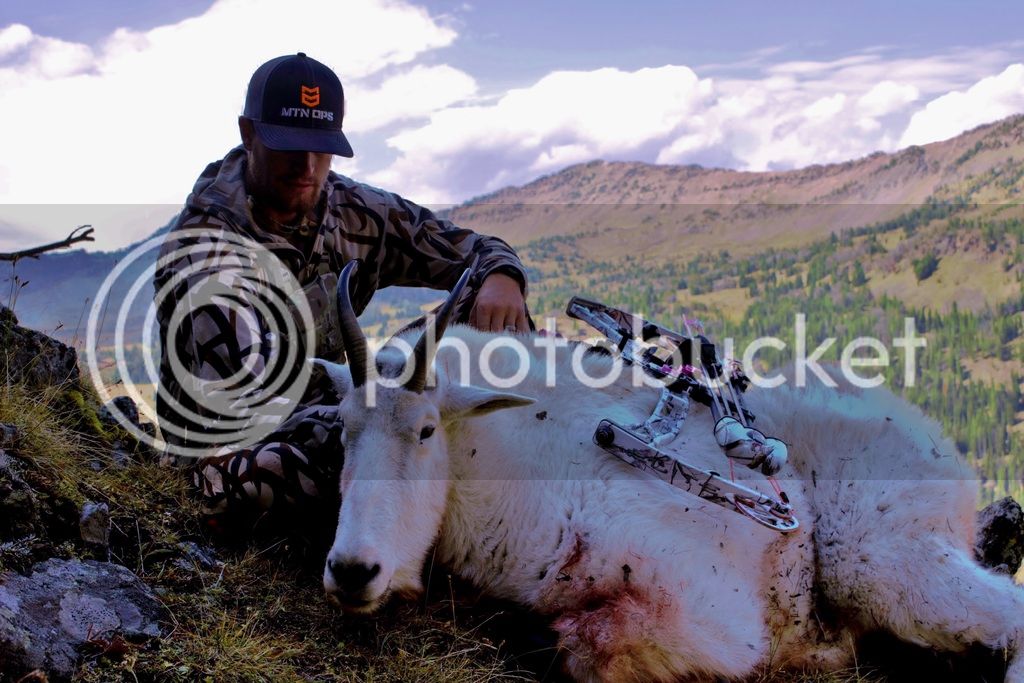 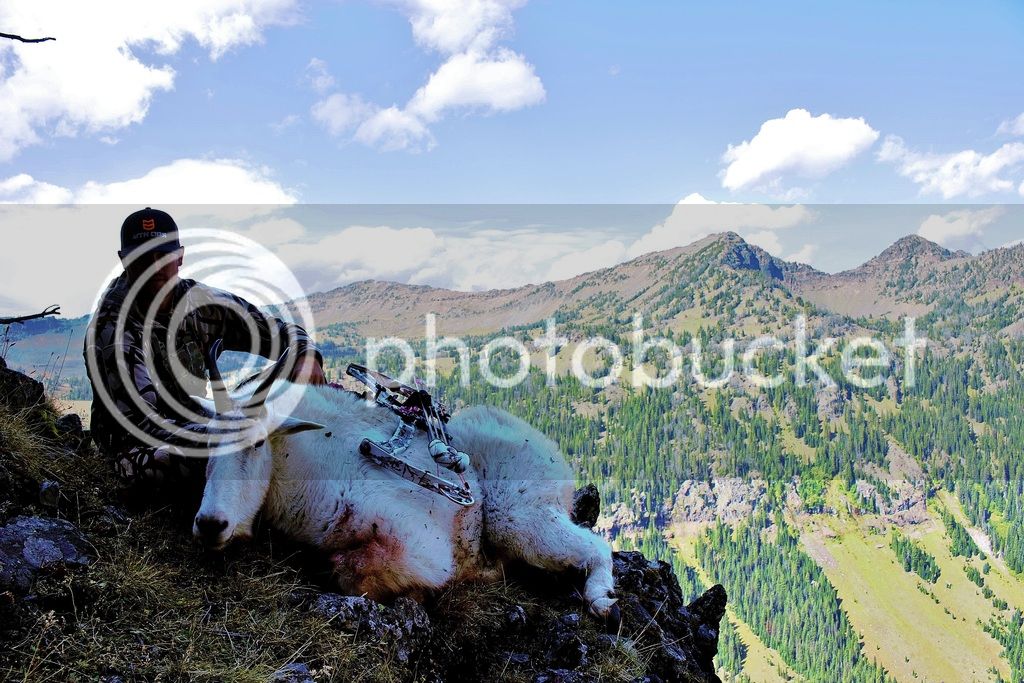 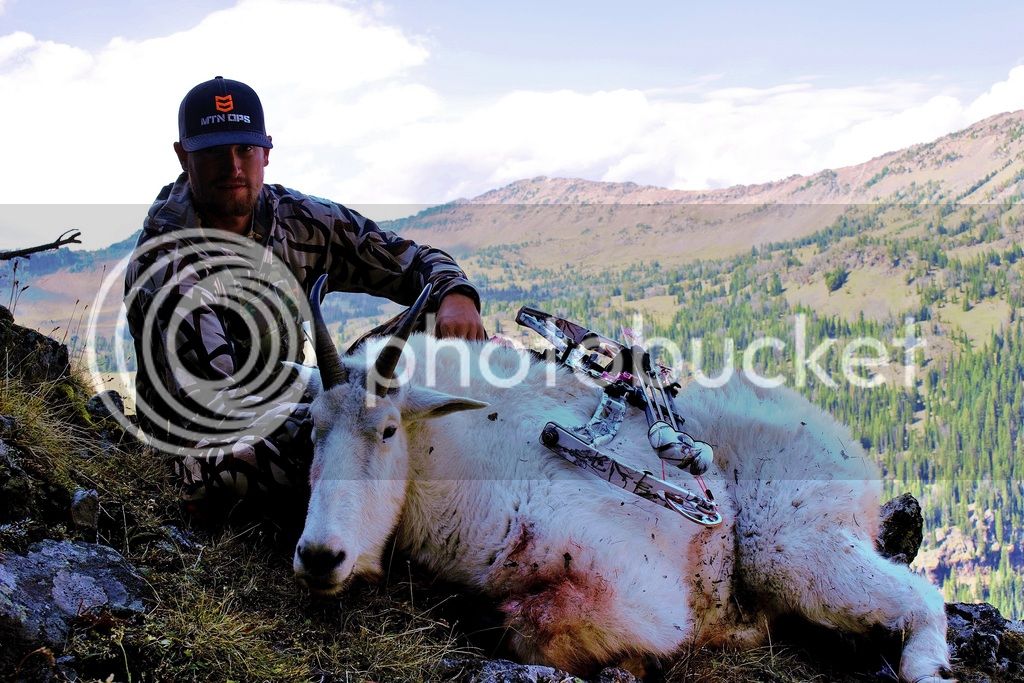 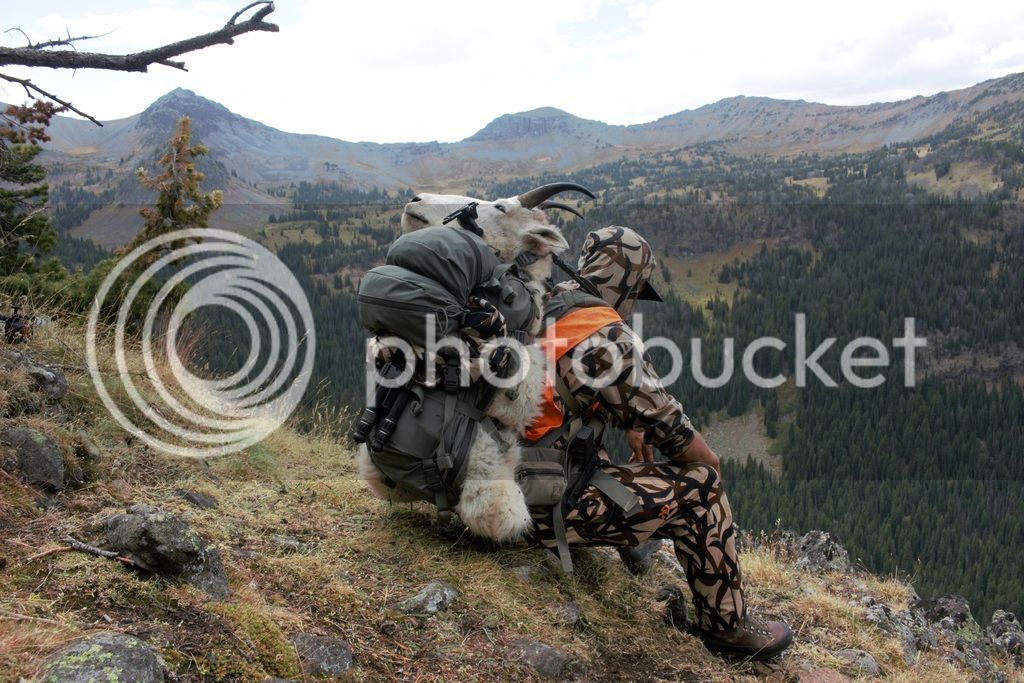 As for the missed first shot, we looked again from above...in the excitement. I ranged the bush in front of him. Glad he hung around. They are beast, he took two arrows to the lungs and made it nearly 200 yards, which seemed like miles.

Great billy! Congrats. They are some of the toughest animals to put down that I know of. For some reason their metabolism and fortitude make them able to live far longer than seems physically possible even with a good shot.
Well done on your hunt!

Congratulations on an incredible hunt and trophy! Thanks for sharing it with us.

The goat we got last year soaked up 3 well placed bullets like a 22. I know another guy that clipped a lung on a billy with his bow and it lived for 3 days until they caught up to him again with a rifle.

Great goat! That's a neat unit, hard not to have a good time back there. Congratulations.

Very nice goat, and archery to top it off! Congratulations!

Sweet story and critter! Congrats on a wonderful hunt.
E

Great Story what an accomplishment! Thanks for sharing.

Way to go Branden...you just took the hardest hunt possible off the list.Goat with a bow.awesome.
1

Super job on a dandy billy!

Wow, what a great story and hunt! Congrats on a great billy. Your pictures are awesome!

Glad it all worked out! Way to stay with it!!

Congratulations! Beautiful photos. Looks like you are on quite a precipis.
You must log in or register to reply here.