Mentored hunt with Pass It On! Outdoors Mentors

Pass It On--Outdoors Mentors ( https://www.outdoormentors.org/ ) works to get youngsters into the field to experience adventure in the great outdoors. Each year hundreds of youth hunters have the opportunity to go afield with mentors and other kids to go after doves, waterfowl, upland game, turkeys and deer.

Kansas has an antlerless whitetail firearms season, which generally happens in mid October. I had the opportunity to go with a Pass It On hunt for a Saturday afternoon doe hunt. A generous land owner allows youth hunts to take place on their ranch land, so with a rifle ready to lend to a youngster, I made it to the meeting spot at the local post office. Two hunters were there already there when I arrived, so I got to meet first time hunter Kierra and her father, and "K1" who would be "my" hunter, and his new friend "K2" who years before had been a youth hunter, and was coming back to be a mentor for K1.

Making it out to the ranch, we met Michael Pearce, the former outdoors writer for the Wichita Eagle. He was in charge of our group's activity on the ranch. He recognized K1 as someone he had hunted with before, as years before they had shared a turkey blind. That day long ago, everything in the outdoors was new for K1, including the call of a cardinal, as well as seeing wild turkeys. K1 got his first turkey after a bit of a rodeo with multiple shots required to bag his bird.

A young K1 on the right in an archived photo 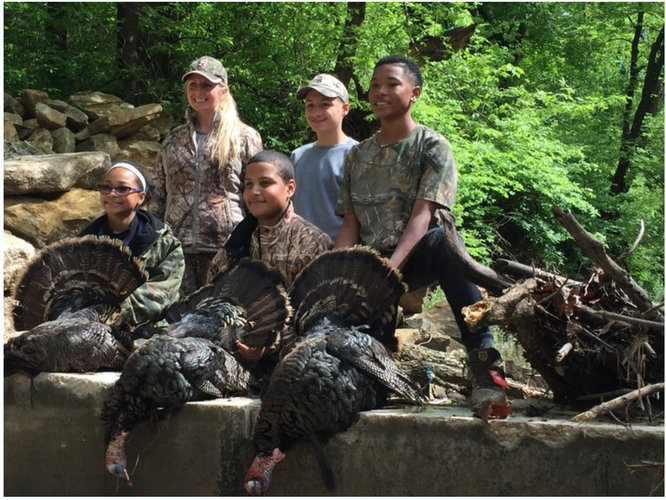 Michael discovered the experience level of each youth hunter, and assigned hunting areas based on the probable shot distance. K1 and K2, being the older and more experienced hunters were assigned to go with me to an elevated box blind (a first for me) that might require a longer shot than any other spot on the ranch.

It was a hot day, with highs in the mid 80's. We were all sweating up a storm in the blind, and at one point K1 said he needed to get out of the blind as he was starting to feel claustrophobic. Michael had lent his personal 30-06 as he was thinking that the longer shot would benefit with more "umph" than a 243.

......and finally we had our first deer sighting.

A young forky buck came out of the treeline and feed on the grasses bordering the wheat field. I had asked K1 to dry fire the '06 as soon as we got into the blind, and now with a deer in view, I asked him to practice aiming for when the time to shoot arrived.

Around ten minutes later, we had our first doe sighting. When she turned broadside and pulled her onside foreleg forward I gave K1 the green light.

At the shot, she flipped over backwards, shuddered twice and was still.


Some appropriately quiet fist bumps occurred, and I verified that K1 was out of deer tags. K2 and K1 switched seats, and we continued to scan the tree lines for another chance to take a deer.

Ten minutes later two more deer came into the field, and at one time the young buck, dead doe and these two were all within 20 yards of each other. K2 settled into the gun, but the smaller deer prevented a clear shot, as well we had to delay the shot due to a backstop of irrigation pipe that we didn't want to damage. Eventually the doe moved far enough that the backstop problem was gone, and he had a clear shot.

At the shot, she jumped forward, and went into the treeline. I asked K2 if he felt good about the shot. He replied in the affirmative.....perhaps slightly insulted that I had even asked. After about twenty seconds, I heard K2 say, "here she comes back". A deer was once again in the opening, and was walking with a hunched up walking motion. I scanned and tried to verify that this deer had signs of blood somewhere, and just as she was going to disappear behind a cedar tree, I started to say "yes, do it", as I could see blood, when K2 sent a second round. The sound of a body hit was heard and she slipped out of view.

I told the hunters that we would wait for at least 20 minutes, as we knew right where K1's deer lay, and we didn't see K2's deer drop, so I wanted to give it some time. Unloading the guns, we once again did some fist bumps and suddenly the hours in the sweat box didn't feel like it had been much of a sacrifice.

After about 15 minutes, we came down out of the blind, and walked the 140 yards to where K1's deer lay. The accubond had broken both shoulders, and death had been instantaneous. We walked over to the impact location of K2's deer, and found big blood spots, with some grain/grass mixed in the red stuff. We tried to make sense of her movements following the blood trail first one way and then the reverse. K2 led the way towards the cedar tree where we last saw her, and found her dead just 15 feet into the trees. I was very relieved to find evidence of two shots.

K2 dragged her towards K1's deer, and a few 'as they lay" picks of K1's deer were snapped, and I took more photos of both deer together with the hunters. 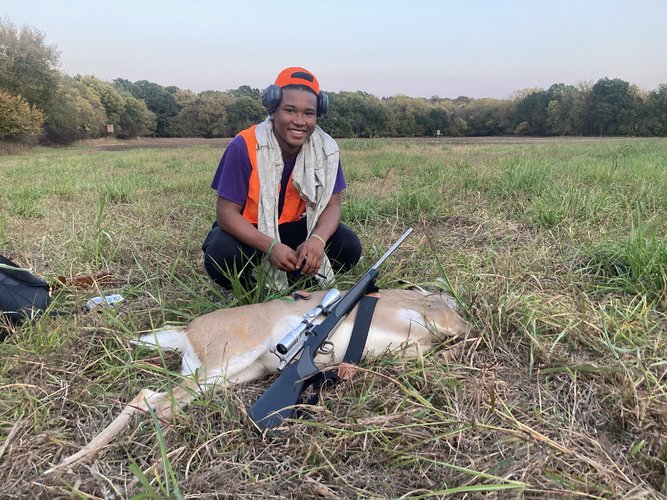 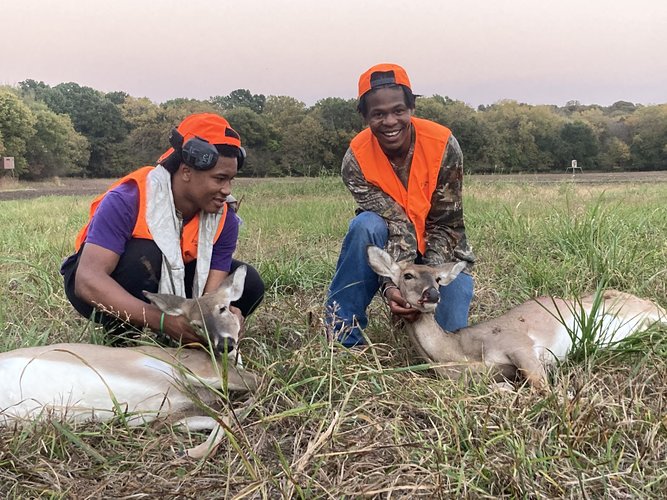 I fired up the thermacell as we stood there waiting for our UTV ride back to the HQ, as the skeeters were out and hungry for blood. And then I had the amazing experience of listening in on these two young men talk to each other about their lives. Life as I have never experienced it......cousins in trouble with the law, some serving significant jail time, fights off the bus, school in the times of COVID, raising "bullies" as a major source of income, of being cautious when K2 approached K1 about the opportunity to go hunting via Pass It On organization, and a general wariness that life requires when you are young and black.

K1 stands at the edge of entering adulthood, and has some choices to make. He stands at the crossroads. Life has presented some really tough lessons. One sentence was uttered that still has me a bit shook........"you can't even trust family" as yet another cousin story, the cousin stealing from an aunt, was shared. I hope that K2 will be a present, positive mentor, I hope that I and other men can help K1 make good choices and encourage him that there is hope, and that there is One (God) in whom it is ok to place trust and faith for life's tough situations.

Once again, thanks Kansas for your bounty, and thanks Pass It On for the opportunity to serve as a mentor/guide.
Last edited: Oct 12, 2020

This is awesome. Great job helping those kids!
F

Hats off to you for stepping up and providing a positive influence on a couple young men.

Thanks for sharing your time. Sounds like a great day for all involved.

Great write-up, great organization, great private land owner, great youth experience, great support from yourself and others!
The challenges afflicting our youth reach *perceived insurmountable obstacles. Our family is directly involved with a parallel setting assisting foster/adoption youth the State has removed from birth parent homes. Absolutely hard to conceive adults are capable of such ruthless disregard for our adults of tomorrow.

Events as you share may bring that one spark to change his/her stars...

Thanks for sharing. Powerful event! Thanks for your involvement.
F

Thanks Kansasdad for sharing your time and values with those boys.

After hunting time was over, we all gathered back at our starting spot, and the deer were placed in a truck for transport to the ranchers workshed/kitchen for a group meal. Eric the rancher was deep frying deer meat and prepping french fries on the outdoor deep fryer, 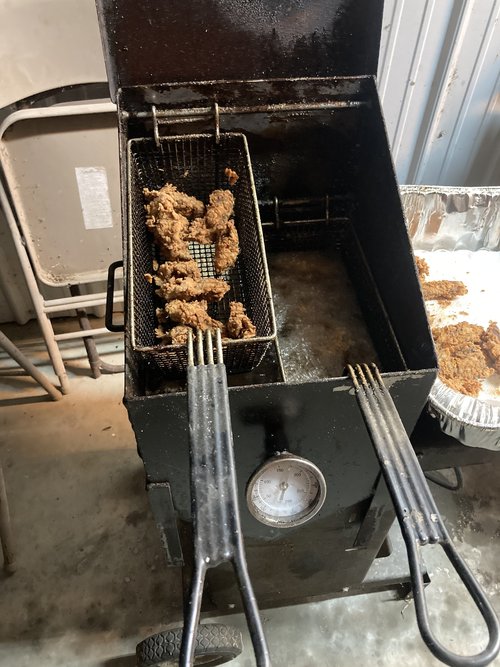 while around the corner the deer were broken down. Michael and Dave were doing a gutless approach to quarter the does, some hung on the gambrel, 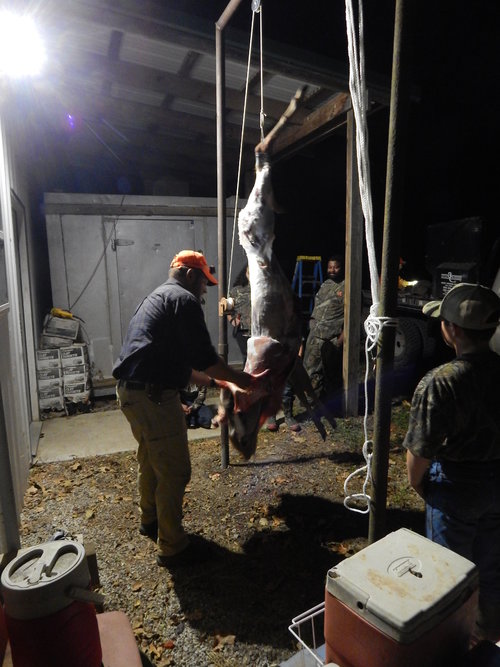 some on the flatbed truck. 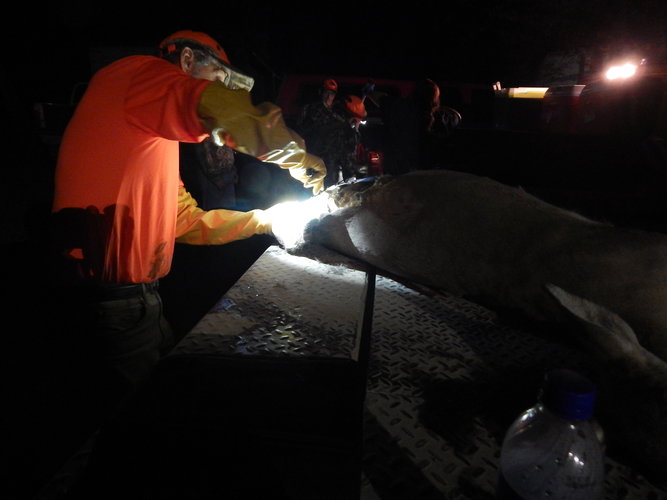 My major contribution was holding the flashlight for the butchering process. Some of the kids were quite interested, others were more interested in wolfing down the deer and fries.

Outdoors Mentors had arranged for 61 mentored deer hunts this weekend, and it seems like there has been a greater than 50% success rate for the young hunters. Other reports and stories can be found at Outdoormentors.org and if you have ever had a thought that you would like to help a kid using an organization such as this one, you are in luck! They function in many states, and if they don't have an organization in your neck of the woods, you might be able to start something where you are.

https://www.outdoormentors.org/what-we-do/ can get you started..........or just do it on your own. Take a kid, neighbor, co-worker or friend and get them involved with the outdoors. In doing so, you can pass it on, and encourage these new folks to learn about how to be a ambassador for wildlife and wild places.

Great write up! Good job on helping out!
You must log in or register to reply here.

F
Women in the outdoors
2

Kaedyn is a deer hunter!
2