Free-range axis deer.... until last December I didn't even know that existed. I always thought axis deer lived behind high-fences. Not true at all. I seems as though they've managed to escape, and are thriving in the hill country of Texas.

I have a buddy whose family owns a ranch near Uvalde, Texas, and he invited me down for an axis deer and hog hunt. I've always wanted to shoot an axis deer, and for a $50 NR exotic license and a few tanks of gas, I wasn't ever going to get a better deal than that.

We saw some really nice axis bucks, but I was never able to close the deal on a big one. Those axis are as skittish as any animal I have seen, and the majority of that country is covered in very thick brush. I learned what an axis deer looked like from behind in a hurry.

I was finally able to get a shot at this little buck in more open country, and I just couldn't pass it up. No matter the size, these animals are beautiful, and the meat is unbelievable. Hoping I get a chance in the near future to do it again. 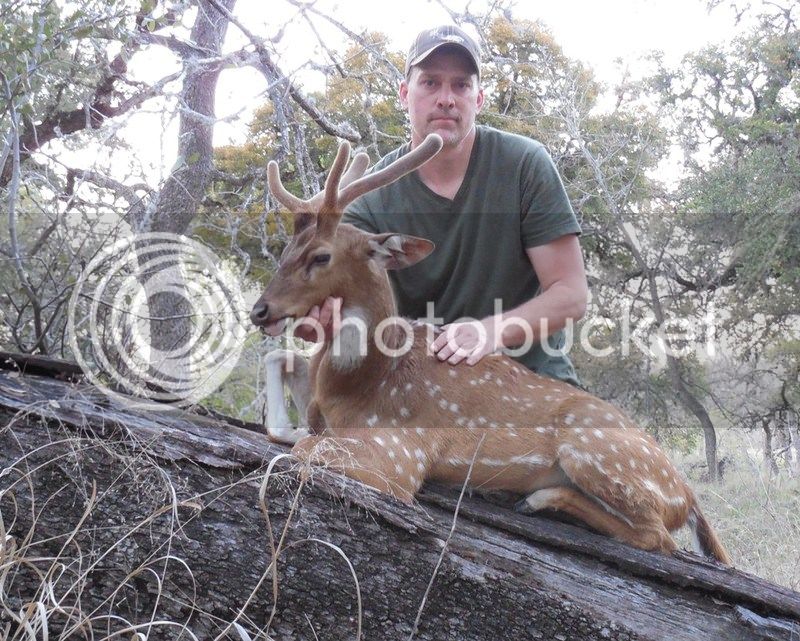 Looks good fun, they are great animals to hunt, wired, like a lot of the other asiatics, they make other deer species look dumb.
C

I am jealous of the steaks you will be enjoying. Axis are indeed some fine eating!

The Uvalde area is brush thick indeed. most of which will stick you.

They have been free ranging for decades on a few of the Hawaii islands. It's a fun hunt with multiple opportunities daily. I've taken 2 so far and would plan another hunt in a heart beat, if I ever go back. You can toss in Mouflon, Spanish goat, turkey, and pigs to boot !
1

I lived in San Antonio for 3 years and did not take advantage of the hunting, At least once a month, made the drive from San Angelo to Fredricksburg and in to San Antonio. Saw so many deer, but once saw an albino Axis outside Kerrville. Thrill of my life! I know Axis have a higher percentage of albinos, but the first I had seen.

Wish I had taken advantage of my hunting opportunities, but worked way too much!

Just came back from Hawaii. These are from 2 weeks ago.

NM Taxi, Congrats on killing one of the best tasting and prettiest deer there are. What are your plans with it? If I could kill another I'd love to tan the whole hide.

I too was able to take a free range Axis in Texas. Sure glad I took advantage of the opportunity and got one on the wall before I moved away.

Spitz, I'm going to mount it. Probably a wall pedestal to show off the hide. What hide I don't use, I'll have tanned. I'm hoping I kill a bigger one sometime, but this may be the only one I ever kill.

Spitz said:
Well done Glass Eye! I hear they can be a tough hunt in Hawaii.
Click to expand...

Very tough in Hawaii because there are too many deer. Every time you glass up some deer and begin a stalk some deer that you didn't see bust' you along the way and starts barking to alert all the deer.
I was stalking a herd with some really large bucks in it when that deformed antlered deer was right in my path at 37 yards and no way around it. So I gave him a lead pill from my muzzleloader.
M

glass eye, did you do that hunt unguided?Was wondering how tough it would be to go out there and just hunt on my own.I haven't researched it at all yet

mixedbag said:
glass eye, did you do that hunt unguided?Was wondering how tough it would be to go out there and just hunt on my own.I haven't researched it at all yet
Click to expand...

All my hunts are unguided ( unless required by law ) There is a really good guide there and his prices are reasonable. Jason Medieros is his name. I prefer DIY but if I were to pay a guide it would be with him.
S

I can't help posting a pic of mine. He adorns the wall now as a pedestal wall mount. For being my first and only, I lucked out. 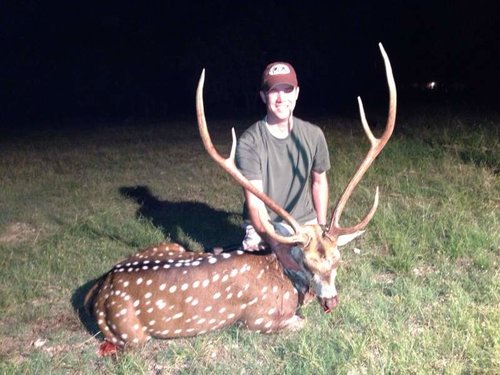 Thanks guys. Hill country Texas free range. Here's a link to the story:

Those are some beautiful deer guys! Looks like a fund hunt.
B

All wonderful trophies! Congrats guys and enjoy your harvest.
You must log in or register to reply here.