I promised my boy that we’d do some hard-core turkey hunting while I had time off work. I’ve taken him “hunting” since he was a newborn, but never really put a ton of emphasis on taking game with him until last fall. We did some archery whitetail hunting together on a piece of public ground that I’m very familiar with and I was able to kill a doe with him while the two of us were hunting from the ground. Super cool moment and he proudly advises to anyone who will listen that we eat his deer for dinner.

We put some time in together scouting new forest ground close to the house in advance of our hunt. I wanted to ease him into the turkey grind and a quick scouting trip to hear the turkeys was the plan. The birds were silent that morning, but I watched two gobblers strut through a burn shortly after fly down and knew we should at least be in the game the next day.

The next morning, we loaded up and headed out. Things that are important to a 4-year-old for a hunting adventure with dad include: Headlight with multiple settings, earmuffs and lots and lots of snacks.

A pair of hunters had beat us to the parking area, but the block was big enough to accommodate us all. As darkness turned to grey light, a bird hammered 75 yards to our northeast. Then, almost immediately after, BANG followed by wing beats from a couple hundred yards to our West.

I was a little bummed, but not discouraged considering there was at least one other bird around. I got pretty aggressive on the call in an effort to establish myself as the dominant hen regrouping everyone. 15 minutes went by and I caught a glimpse of black headed our way 100 yards out. I looked over at my hunting partner who was sound asleep in his gobbler lounger. As much as I wanted to wake him, there was no way to do it quietly as the bird approached. I definitely lack the self-discipline of a seasoned filmer and sometimes wish my desire to harvest wasn’t so strong.

I quickly got my gun into position and let out a few small bubble clucks to reaffirm my love. The gobbler picked up his pace and started to trot to us. In no time, he was at 15 yards ready for the taking.

At this point, I’ll share a quick learning lesson. Two days prior I smacked my red dot pretty hard on my car door. Concerned that I’d be off, I consulted with a friend who said I should just check it with some target load instead of wasting one of my TSS. Well, I should have trusted my gut and not been such a cheap azz. Long story short, the target load was off 3” to the right but later I found my TSS was off 3” left. Not sure how that works, but it is what it is.

Here is my pattern at 20 yards:

I think you know what happens next. I compensated left three inches with my shot and missed the bird clean. I’m shooting a super tight choke that produces a golf ball sized pattern at 20 yards and a baseball at 40. Well, crap.

My hunting buddy slept through the entire ordeal, so I woke him up. We did a scan for blood/feathers and turning up none we decided to call it a morning. Short hunts are key to keeping it fun. On the way out we met the other lucky hunter who allowed my son to pet his dead turkey, which was a highlight for him. In fact, it was such a highlight that when I asked my son “what was your favorite part of the hunt” on the way home, he said “seeing that other guys’ turkey”. Ouch!

We spent that afternoon at T-ball and his sister’s birthday party, then fixed our red dot issue in anticipation of redemption the next morning.

We got to the parking a little earlier than the day before and were able to chat with the other hunter who had returned for another opportunity, working out who would go where and set on our way. As dawn began to break, we were greeted by the sound of gobbling just 75 yards to our north. At flydown, I offered a cackle and some soft clucks, then shut it down. 20 minutes went by, but the bird never gobbled again. Hens were going nuts back in the tai-tai, though, so I knew he was close.

Out of the corner of my eye I caught a glimpse of fan down an old firebreak. Another bird had slipped in silent behind us and was putting on a show for hens that he could not yet see. I scratched the leaves a little bit since we were too exposed to call but close enough for him to hear subtle turkey sounds. The bird’s body language immediately suggested that he was interested, and he slowly began to strut our direction. After what seemed like an hour, but really only amounted to 10 minutes, the bird was in range at 50 yards. Not a poke I prefer to take, but I’ve built a gun combo that is dialed out to that range producing well over 250 pellets in a 10” circle. With renewed confidence in my accuracy, I whispered to my hunting buddy to secure his ear muffs and watch daddy, then BANG flop, flop flop. Eastern down!

For sure a high point in my life and one of just many days I hope to enjoy in the woods with my boy as he grows into a man. 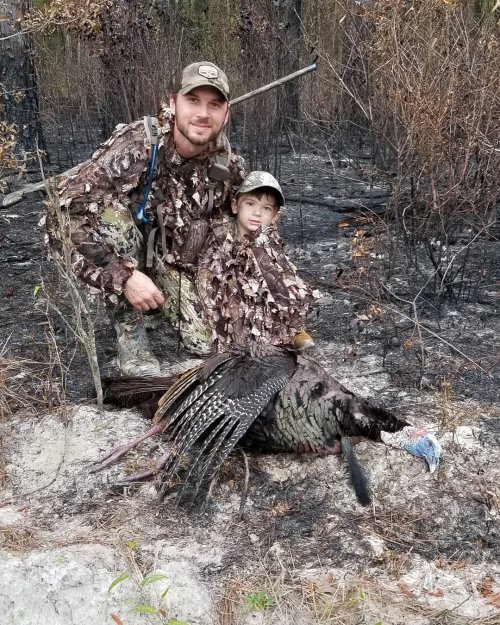 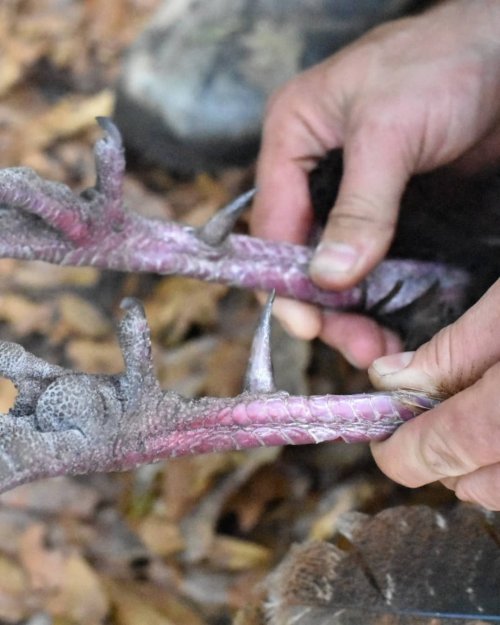 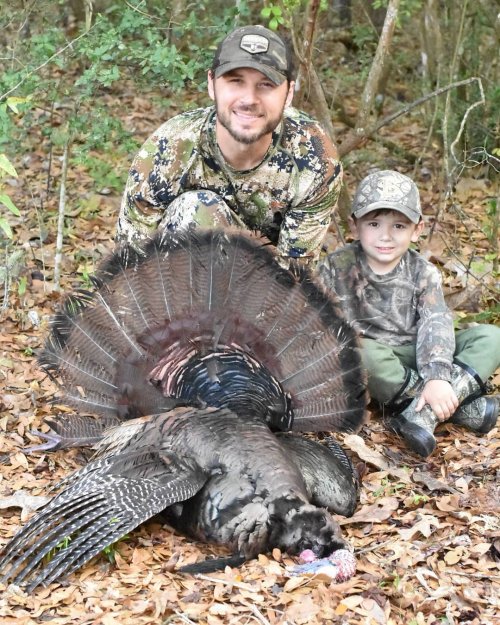 Awsome hunt with the boy.
L

nice one,i am sure your son will always remember this hunt
M

I use to take my kids deer hunting all the time when they were little. It was the only way I could get free and we loved every minute. Congrats! Great memories made.

At his age, this may be his oldest memory. Congratulations on a big old tom.
1

Awesome!! Can’t wait to head out with my 4 year old daughter in a couple weeks! Congrats on a great morning.

That’s awesome! I am taking my 4 year old to South Dakota in a week
R

That's awesome! It's great that you're keeping it fun and comfortable for your new hunting partner. Gotta keep it fun till they're hooked on hunting! I often pass on pushing my young hunters into the type ordeal necessary to make it happen. At that age, I believe it's better to fail and have fun than be successful in miserable conditions!

That bird is probably as old as he is. Good work.
M

It doesn't get better!

-Z
You must log in or register to reply here.