A lot going on this year and I didn't know how much elk hunting I'd get in... and I dreaded not having meat in the freezer... so... my hunting pardner and I vowed to kill legal elk as soon as possible... 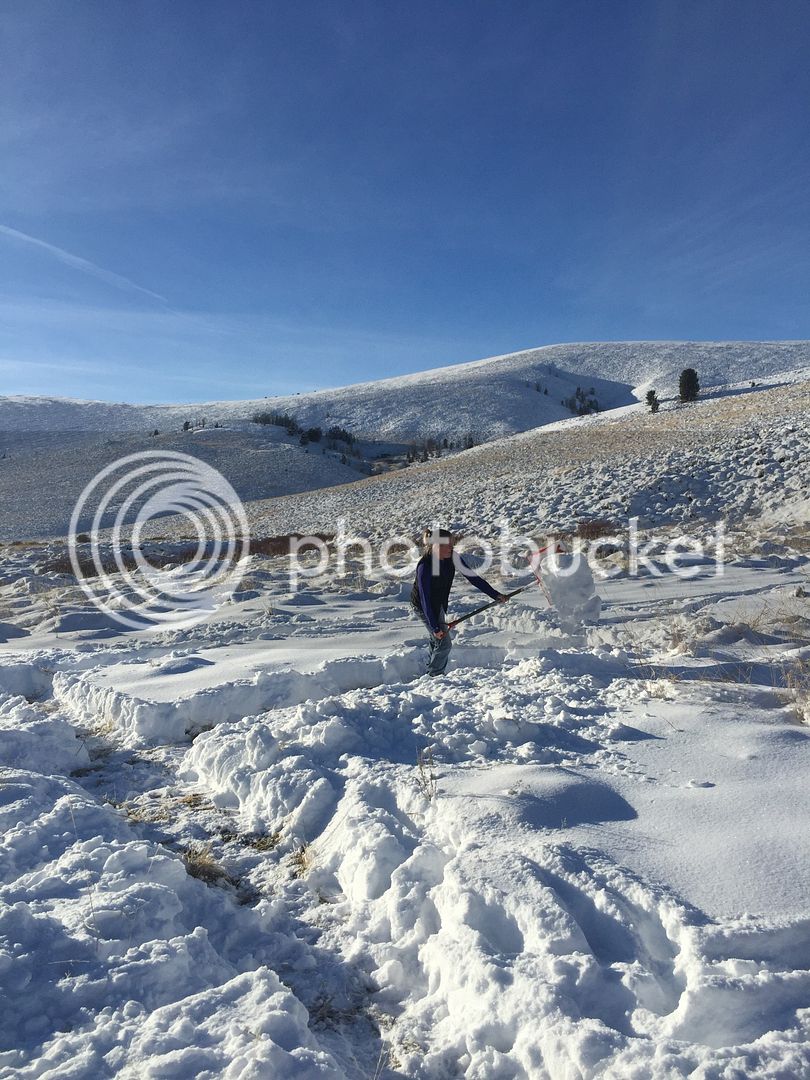 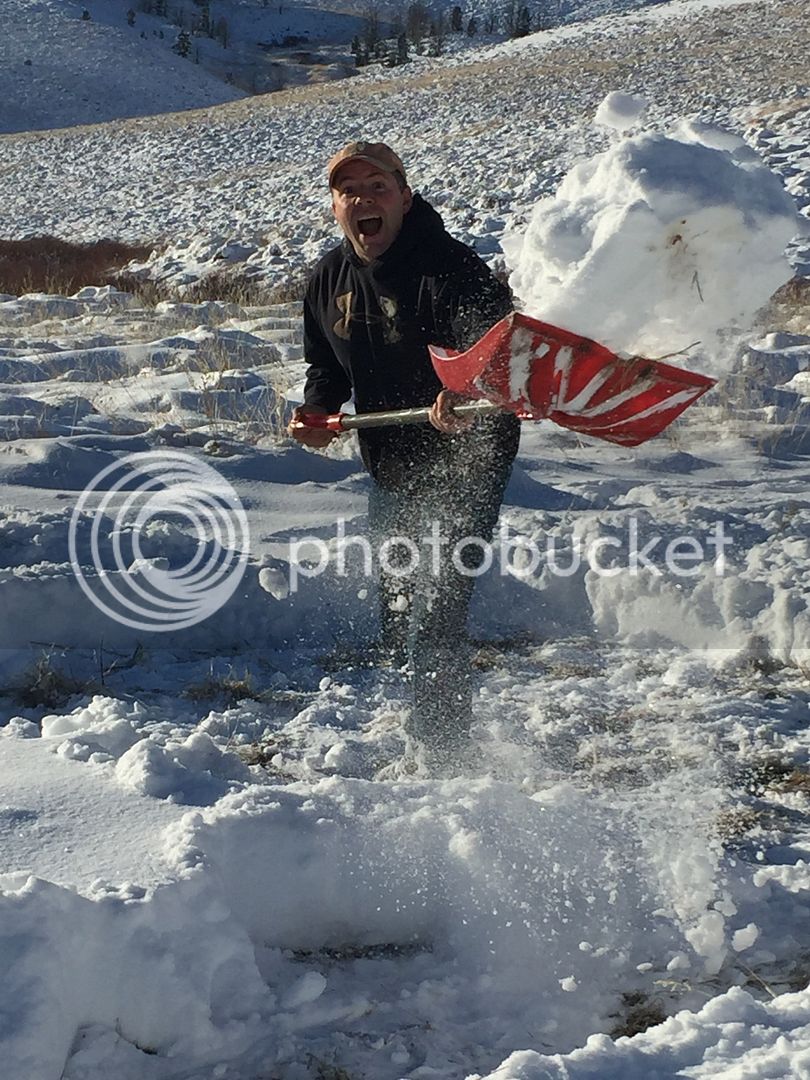 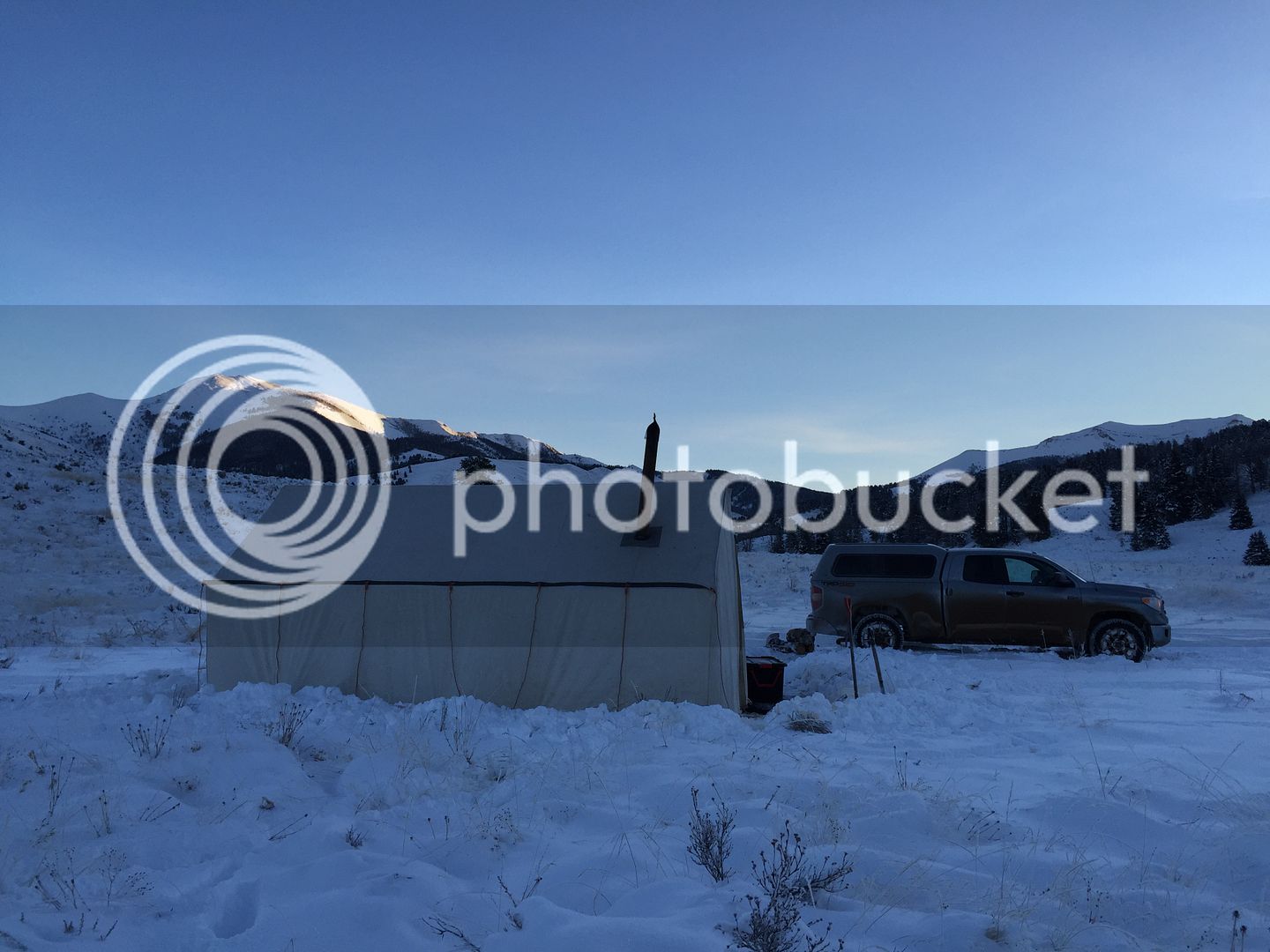 The next morning the 4 of us headed out. It was 7 degrees and the snow was deep and the elk sign was sparse... but life was still good... 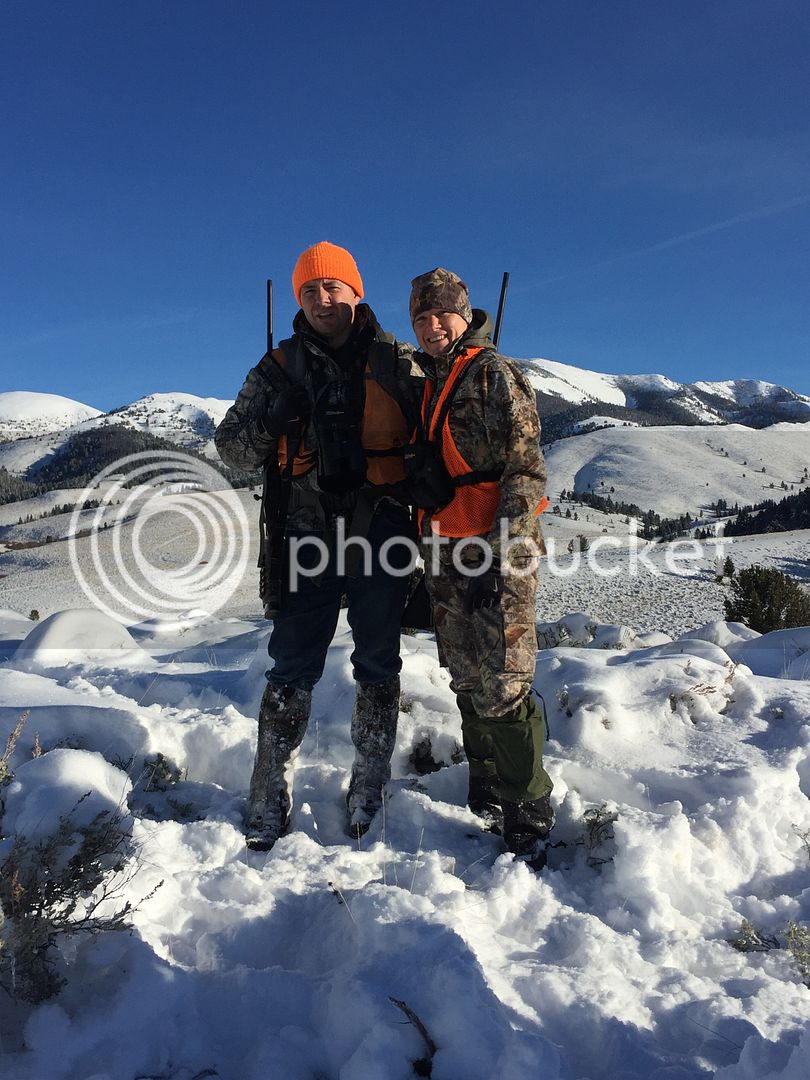 This mom... holy smacks... just not a many moms like this... these boys got a good one. 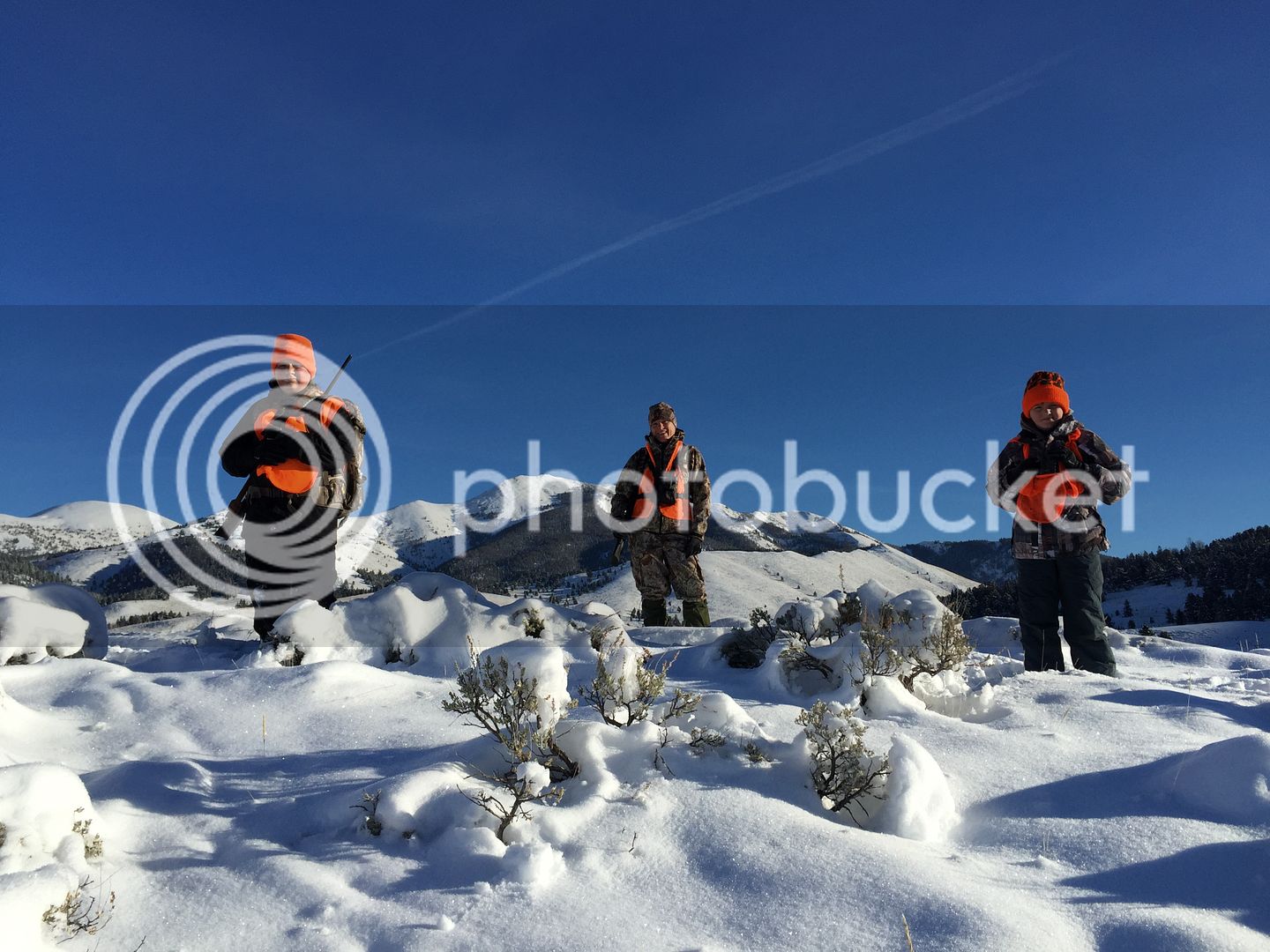 Well, that morning... and that evening... there was a lot of trudging around in the snow... but that was about it.

The next morning we sorta kinda slept in a bit, then decided to head down the road and try a canyon we liked the looks of during archery season. As I eased close to the parking spot I wanted I stopped and glassed up the mountain... not too anxious to go wade through the snow, especially with the lack of elk sign...

Two bulls were in the wide open, above timberline... way out of reach in the snow conditions for the kids... They all told me I should go for it and they would take a different hunt up the canyon we planned originally...

An hour later I was above timberline and struggling through crotch deep drifts... expecting any second to spot these bulls bedded in the timber behind the ridge, out of the fiercely blowing wind... another hour and I hadn't found them OR sign of them. This led me out onto the windblown slope where I ended up catching their tracks heading down the canyon and into the thick timber on an east facing slope.... opposite of what I thought. I was bushed... I pulled the plug and headed back down the hill, meeting them at the truck.

That evening, the kids were played out and decided to stay in the tent and hang out while we went out for the late hunt. We decided to head back into that canyon and see if we could find those bulls.

As we pulled near the parking spot, I stopped to glass and see if they were in sight... they weren't. What were in sight were three cows, 600 yards across the sage right on the tree line. We decided to split up. Becky headed up a draw just east of the draw they were in and I drove past and parked 1/2 mile away and skirted through some timber on a slope that would bring me back above them.

We ended up meeting where the cows were, but the snow showed they had bailed into the timber on the east facing ridge, same slope the bulls had bailed into that morning. I told Becky to slink up the open sidehill across the canyon from the timber while I dogged the tracks in the snow...

After about 20 minutes I came to a sparser patch of timber where I could see out across the canyon. At that moment, I watched as Becky plopped down in the snow and rest her elbows on her knees...aiming her gun up the canyon ahead of me. I awaited the shot but it didn't come. She got up and started sneaking along the slope up canyon. I started up the tracks again.

5 minutes later an elk is staring at me 35 yards ahead in the timber... I looked at her and thought "I want Becky to get a shot... she hasn't killed an elk"... then I realized she'd want me to take one to ensure we had meat. I sent a 168 grain TSX straight in the chest, head on and the elk disappeared. At that point, I saw another elk rise into view... and after about 4 seconds I saw it shudder.. then heard the "boom"... from across the canyon. The elk stumbled out of view.

I turned on my handheld radio and called for Becky... she answered, asking if they were both down. I wasn't sure. I snuck ahead and verified it... two elk... down in the snow less than 5 yards from eachother!

Becky hustled across the canyon, up the steep slope... Can you tell if she's happy? 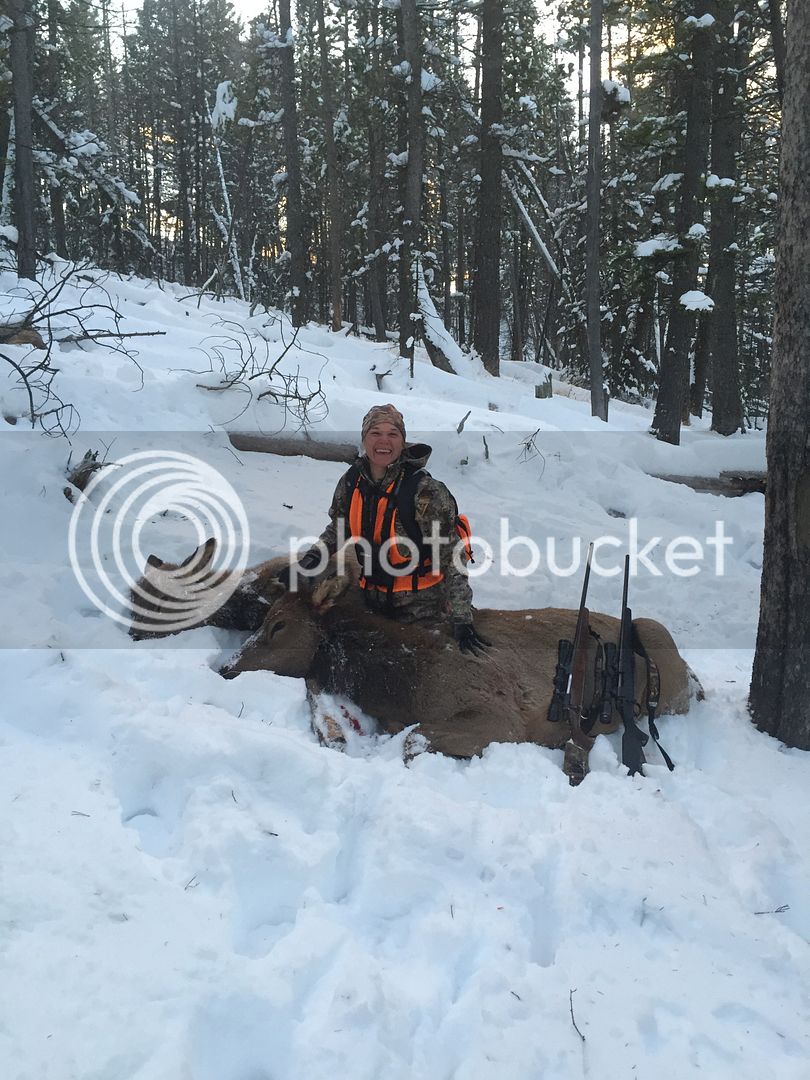 IT was pretty cool. But with dark setting in, I knew what we really had there was a big fat pain in my back!!! 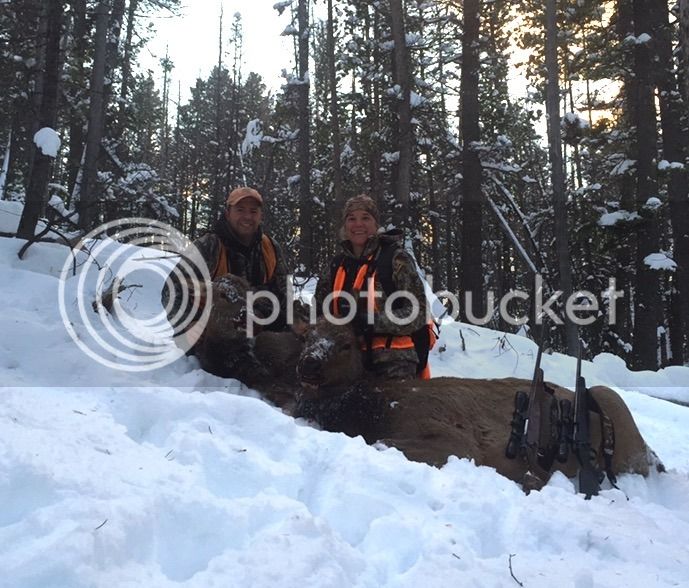 I quartered them both up and buried pieces in the snow... and got the heck out of there.

Early the next morning we headed in and started the real work. They were only 3/4 mile from the truck... and we had snow and a sled... but frick... those sleds and deep snow and thick sage... not fun. 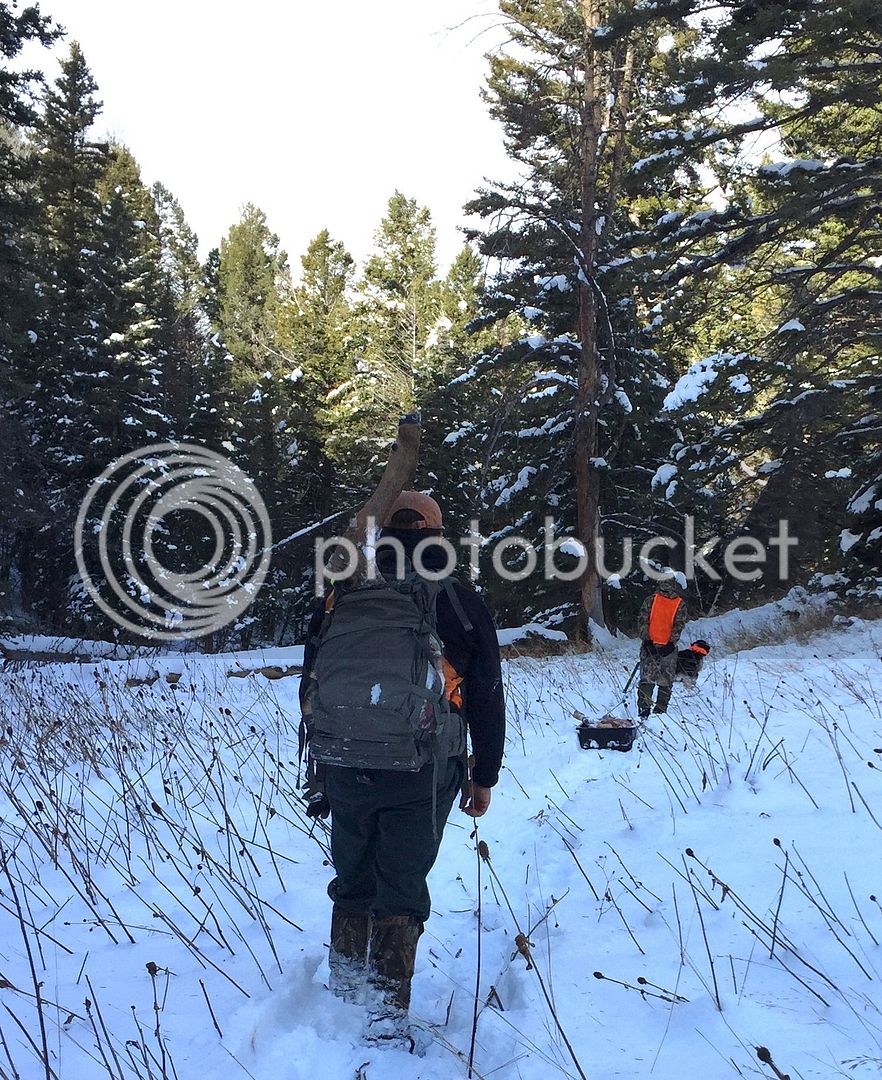 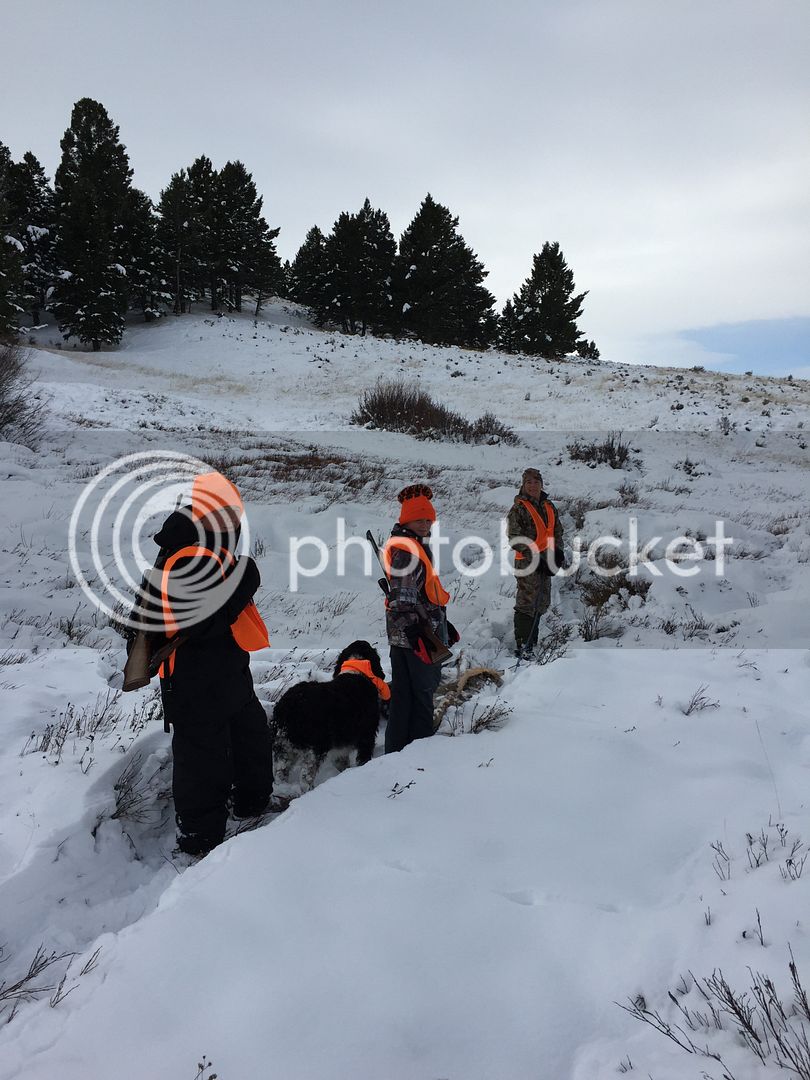 Gotta have a selfie or two... 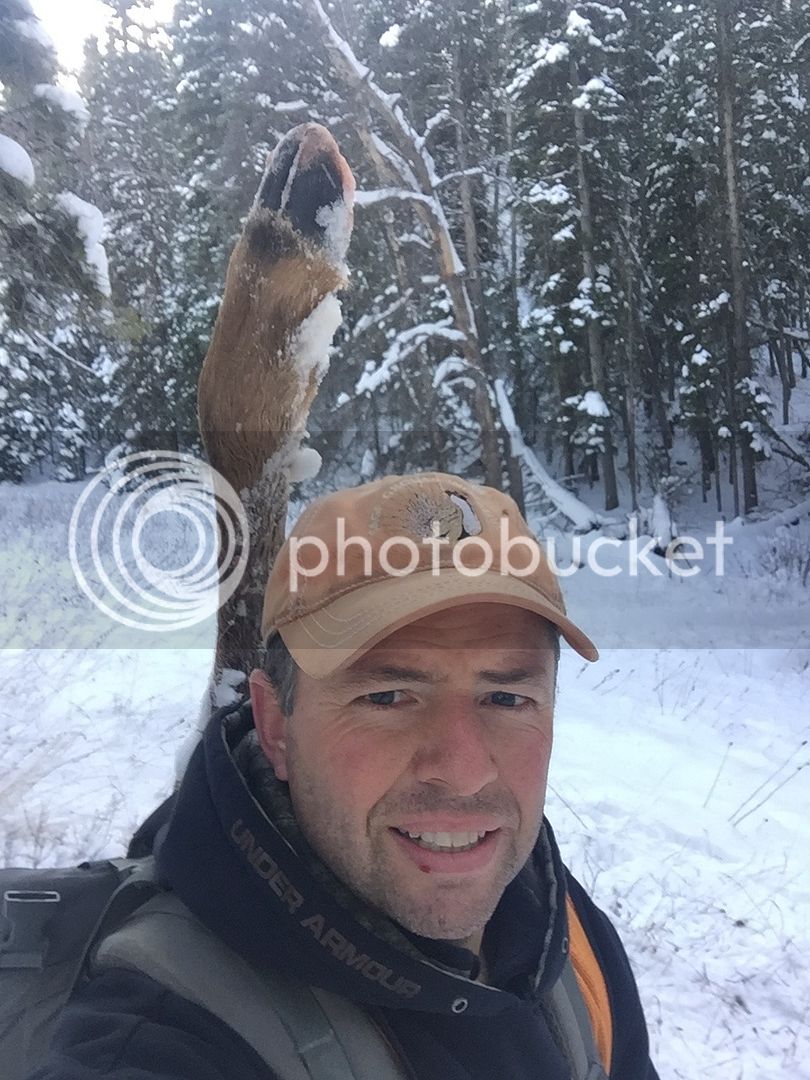 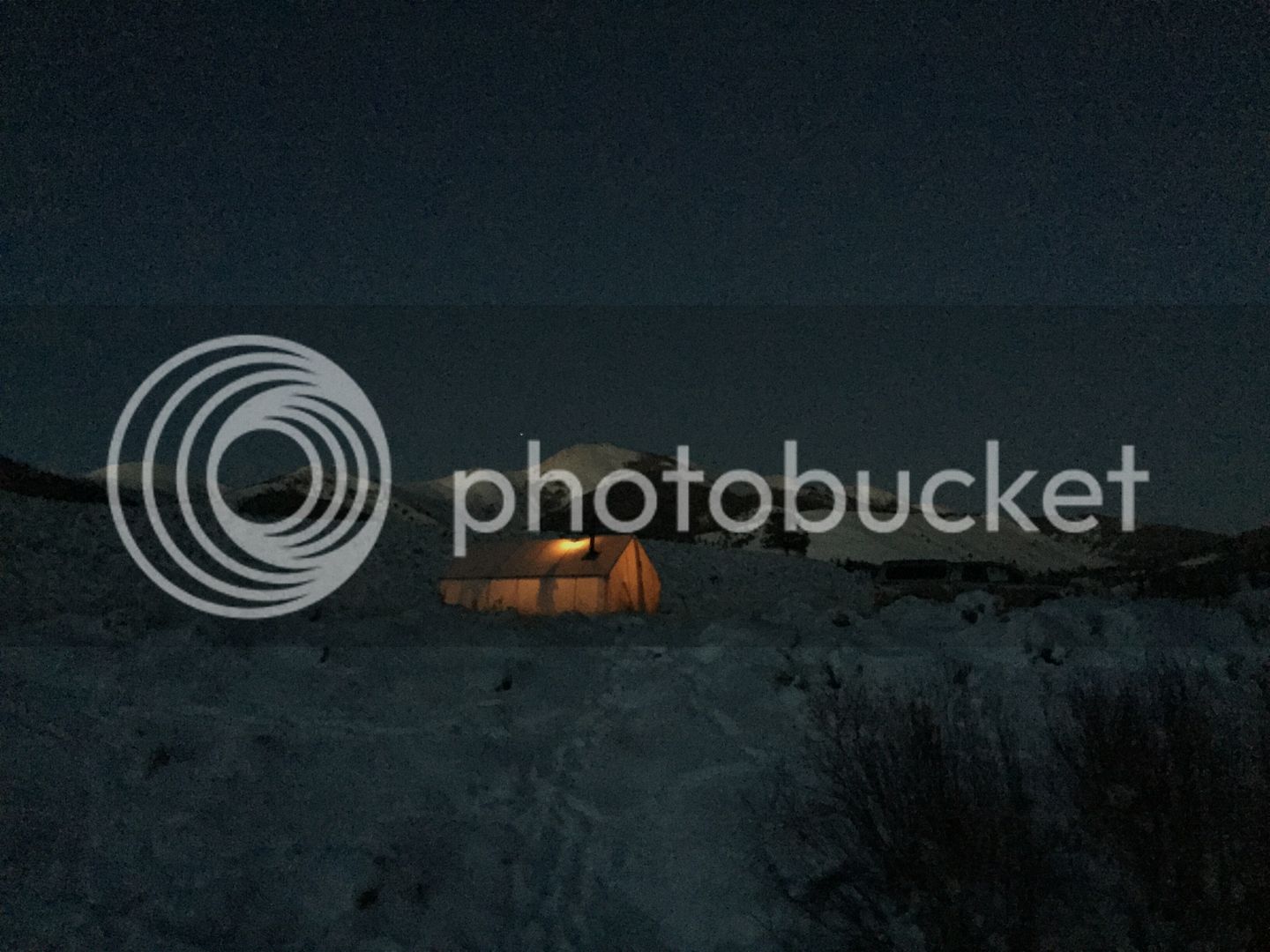 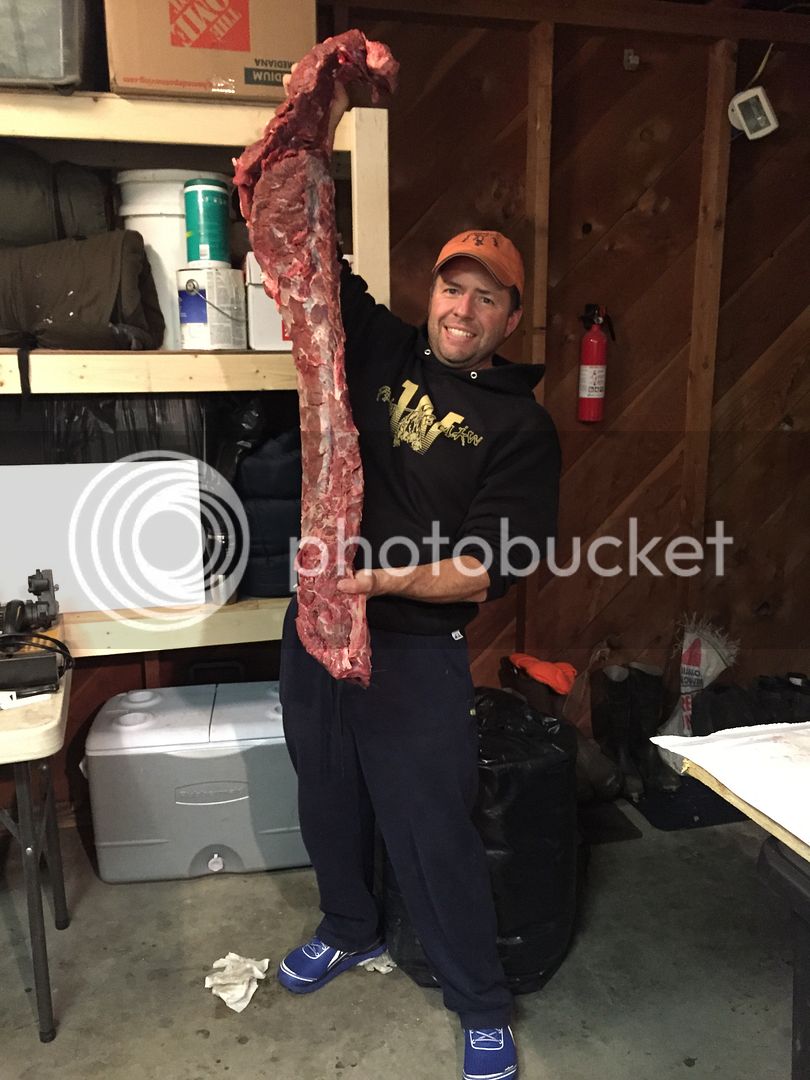 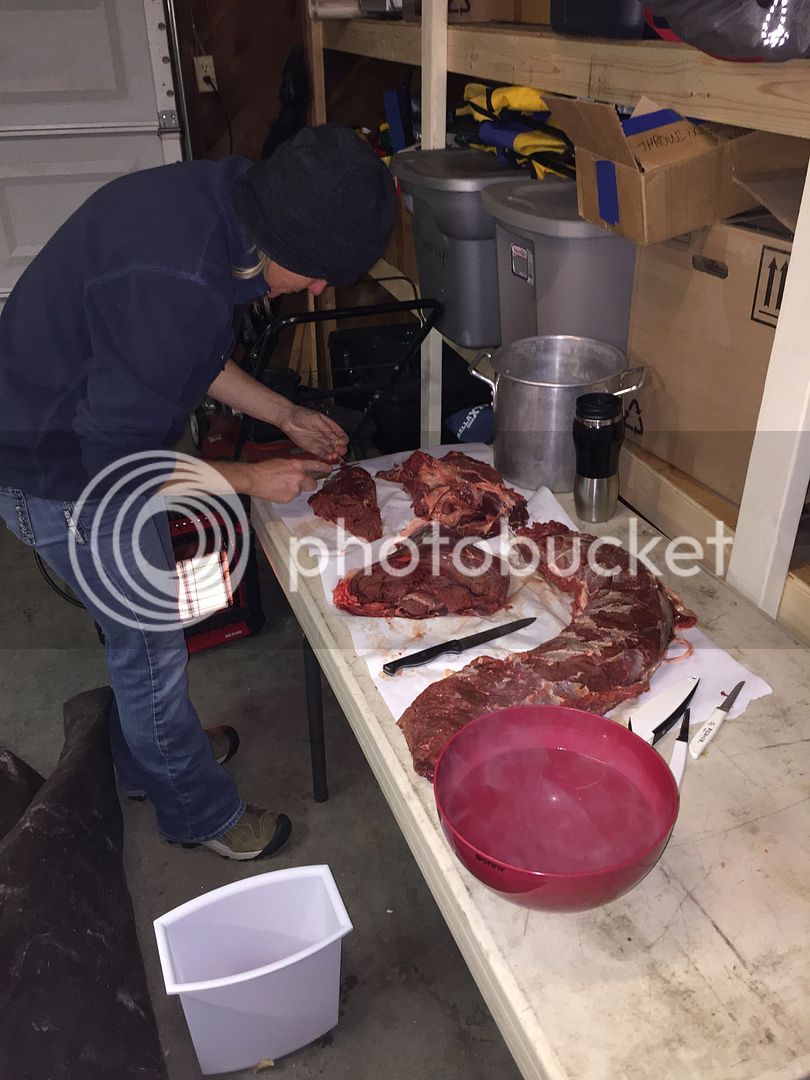 Amazing fir snag... took me 14 strides to walk around the base... tree was insanely amazing.... 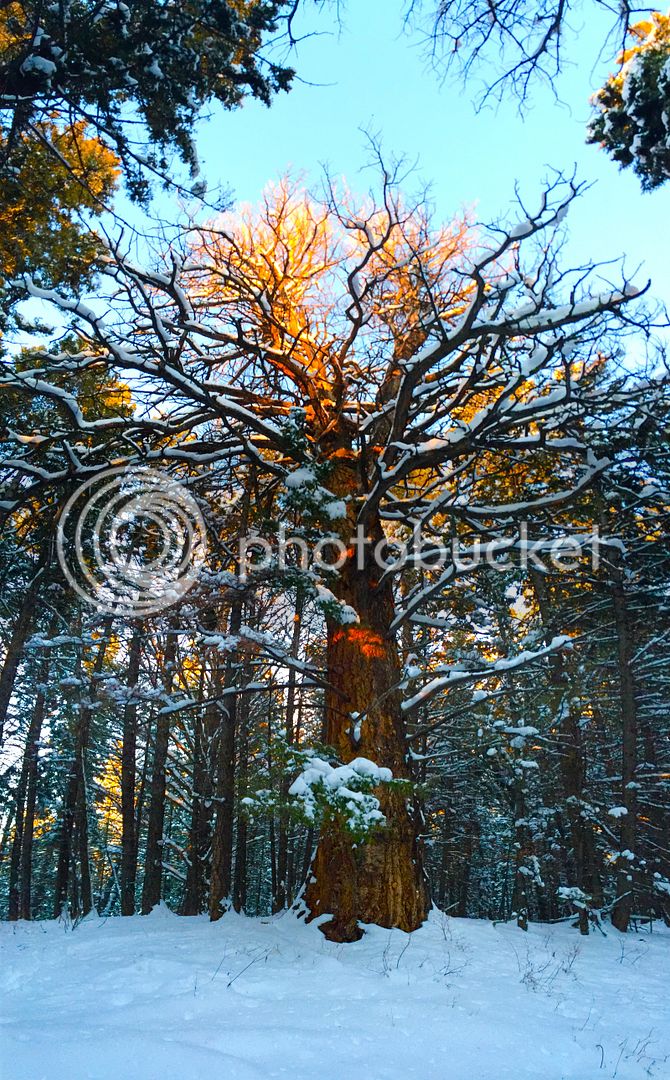 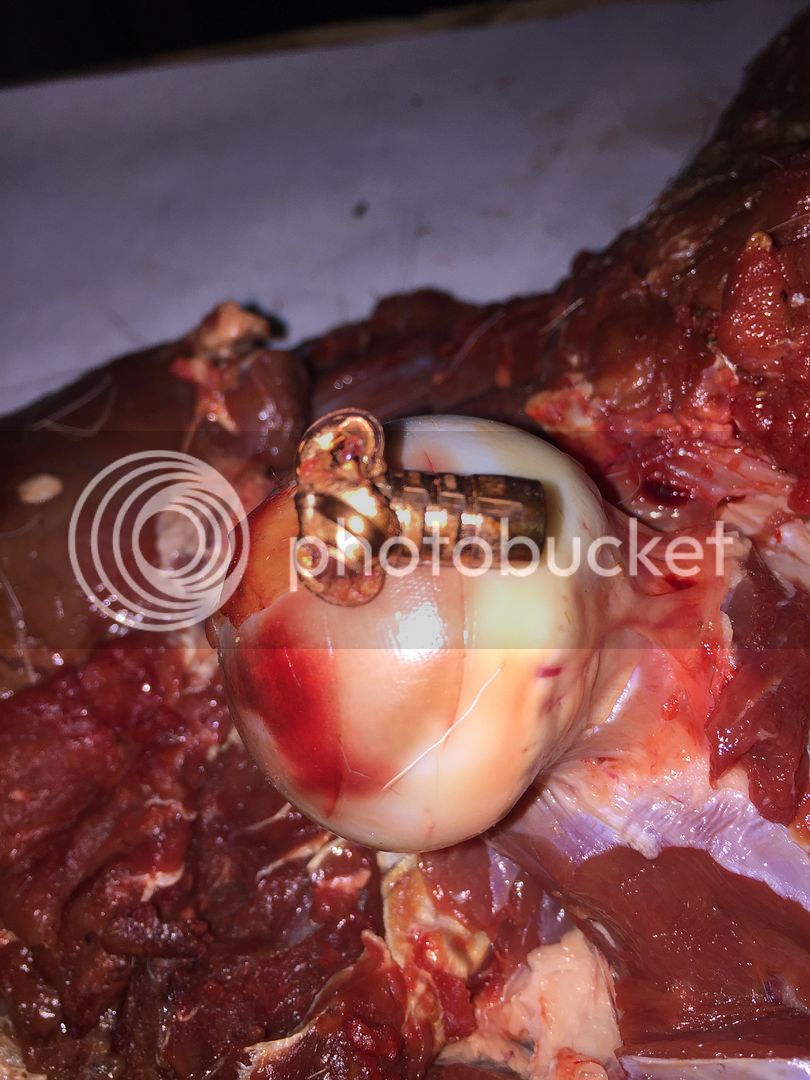 That's an awesome story, way to get them all out there, and a double to boot!

Awesome thread. I liked the photos and story. Congrats on your freezer full of meat. Be careful not to get blood on those new blue Altra's!

Now that is top notch.....Congrats to the entire group.

Ah, so spoiled with your long seasons. I'm jealous. Thanks for sharing.

Nicely done, Ernie. Good memories for the whole bunch. Quite the season your having.
C

Dang two down near dark... my back hurts just thinking about the work that ensued.

Congrats on all the meat in the freezer.
R

Wow, what an incredible hunt!! Very cool, yet unorthodox, double!!

Well Done! Enjoy the meat! Gotta love those Barnes Bullets
You must log in or register to reply here.

A perfect day, one day too late.