Many of you have seen me using all kinds of different coolers over the course of the TV show. I've been sent coolers by most every company out there and I have bought plenty of them with my own money.. Some performed pretty well, some were a disaster, and some in between.

About this time last year, a guy got in touch with me and said he worked for one of the premier kayak companies in the world, Jackson Kayaks. He went on to tell me that they had started making high-end coolers, branded Orion Coolers, and wanted me to abuse them and give some feedback. I had no idea who he was, but he sure knew a lot about our platforms, our audience, and our style of hunting.

Before I ever do any testing or offer to try something new, I want to know who is involved and what is their commitment to hunting and conservation. This guy obviously knew about us and how we use equipment. He could tell me about "Episode X" of our show and how he wanted to do the same hunt or had done the same hunt. As I inquired more, I came to learn of the many other self-guided hunts he had done on accessible lands. OK, he and the company passed that first test. Damon is the real deal and is committed to our style of hunting.

He sent me a link to his blog. Some cool adventures there, and more to come as he traveled the west this hunting season doing what I do, but without the complication of video cameras.

I spent sometime researching the company and talked to some serious kayakers who instantly knew of the parent company, Jackson Kayaks. They spoke very highly of the kayaks and the how the company is an innovator. I did my own research on the features of the coolers and how they were made at the factory in Tennessee. OK Damon, send me some Orion Coolers and let's see how they work.

With that, I went about inspecting, using/abusing, and trying to destroy some Orion Coolers. I used them for typical cooler applications. In Colorado, I left two of them in the warm hotel room, full of frozen milk jugs, for seven days. I did this for two reasons. First, to see how long ice would last in room temps that were consistently high over 24 hours of 7 days, rather than the warm days/cold nights world of our camps where we keep everything in the shade and under blankets to protect them from sun. Second, I was thinking I would surely need that ice for the big buck I was going to kill. When we left, I still had lots of ice in those milk jugs. Unfortunately the big deer I was chasing was still running around, making that ice unnecessary.

I used them for camp chairs, cooking tables, cutting boards, lantern stands, foot stools, storage bins, ladders, and most any other application for which you can employ a cooler in a hunting camp. They bounced around in my trucks for a few thousand miles (I failed to use the tie down system) and they are no worse for wear. They held ice, food, beer for the camera guys, and did so with great results.

Point being, I was impressed. You all know how picky I am when it comes to gear and equipment. I turn down way more equipment than I ever accept. I buy a lot of my own gear, even when some companies with inferior products are offering to pay me to use their gear. I always require a lot of field testing before I will speak about a product. There are a lot of products I've field tested that you have not read about on Hunt Talk, given they did not meet the standards we have. Not only does the product need to meed the quality and durability requirements, the company need to be committed to our style of hunting and conservation.

I'm going to see if I can get them to send me one to use for some sort of promotion for our followers. I can assure you that no matter your application for coolers, one of these Orion coolers will exceed your expectations.

If you have a few minutes and want to see what thought went into this cooler, here is a video to watch. It is probably better than me listing feature after feature here on the forum. https://www.youtube.com/watch?v=8J3TpP_0yT0 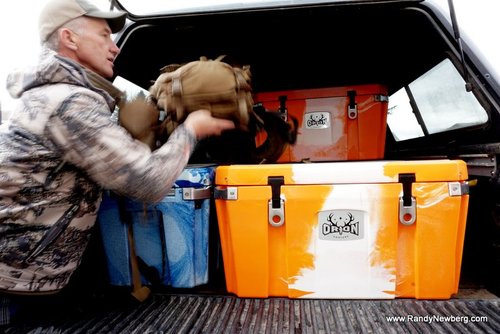 Here is a link to the Orion Cooler website, if you want to do some of your own research. http://orioncoolers.com/

Oh and don't forget every corner has a bottle opener. Sweet idea.
H

Saw these first hand in Randy's shop. They look awesome and to be practically indestructible.

A "must have" feature for you Wisconsin guys who lead the nation in per-capita beer consumption.

Yes, they keep stuff like rain/dirt/dust/snow out, with a strong gasket seal that the Igloo, and many others, do not have.
R

Awesome that they're made in the USA. Too heavy to fly with, but would make a great seat/platform for my raft. I'll be happy to win one of these when you roll out the promotion.

Very cool coolers, but I will have to stick with my made in the USA Coleman Xtreme that only costs $40.

Very cool coolers! I liked the video and that they have so many standard features!
P

Thanks for the heads up.

I am a kayaker, and for what its worth, Jackson Kayak - the parent company of Orion, is deeply committed to conservation. They are a big financial supporter of river conservation efforts in the whitewater boating community, and actively participate in organizations like AW. All around good people - IMO.

One thing that impressed me when Eric Jackson started the company was that he made a huge commitment to a small, economically struggling town in Tennessee for manufacturing. He converted an abandoned Levi's jeans factory into a boat factory. Their aren't many people out there committed to rural America these days. He is one guy that has stepped up.

BTW - Not only is EJ one of the top kayak makers, he is also a world champion kayaker in several disciplines (free style, slalom, C2, etc). He takes his product designs very seriously, and stands behinds what he makes. They've put together a top kayak fishing team and product line too. They do the research and really try to get it right.

Those look pretty good and appear to be quite a cooler!

Randy, I'll be in Bozeman next week so I can get one of your extra Orion demos and put it through my own tests. LOL!
S

I like the colors. There are definitely some great coolers out there these days.

Wanted to get my dad a top of the line cooler for Christmas. Looked long and hard at these Orion's...

They should really think about a corkscrew on one of the corners.

noharleyyet said:
They should really think about a corkscrew on one of the corners.
Click to expand...

Yes. And I also asked for the espresso steamer built into the lid. I'll ask that they get working on both modifications.
B

I looked around the website and the links you provided for some specifics...maybe I'm just not looking in the right spot.

But, do you have any idea of the empty weight of these coolers compared to a yeti?

My Dad snagged a yeti 125 for me from his neighbor for $100 and I've used it this hunting season. There is no doubt its a good cooler...but good grief that thing is a heavy SOB. Loaded with ice, food, etc. its an outright joke.

While asking for a comparison between the 2 brands, the over-all SIZE of the yeti compared to the usable space is another thing I don't care for. The yeti 125 is an awfully big cooler for the amount of space inside.

I looked around the website and the links you provided for some specifics...maybe I'm just not looking in the right spot.

But, do you have any idea of the empty weight of these coolers compared to a yeti?

My Dad snagged a yeti 125 for me from his neighbor for $100 and I've used it this hunting season. There is no doubt its a good cooler...but good grief that thing is a heavy SOB. Loaded with ice, food, etc. its an outright joke.

While asking for a comparison between the 2 brands, the over-all SIZE of the yeti compared to the usable space is another thing I don't care for. The yeti 125 is an awfully big cooler for the amount of space inside.
Click to expand...

Here are the specs on the Orion Coolers. http://orioncoolers.com/our-coolers/

The Orion coolers are a bit more stout, and therefore, a bit heavier than the Yeti coolers. I think they are a couple pounds heavier. They have slightly larger outside dimensions. All due to increasing the amount of insulating values.

Yeah, a 125 quart roto-molded cooler needs to come with a track drive system and a Tommy-lift tail gate. A cooler of that size is just heavy, even empty.

I focus on using 65 and 85 quart coolers. I have found they have the best combination of weight-to-useable space.
B

Thanks Randy, that's what I was thinking.

IMO, there was a lot more thought put into the orions on over-all dimensions, tie down points, light, etc. which make them more attractive for my needs.

I think you're also on the right track using 65 and 85 models with the roto-molded coolers...any bigger and odds of a future hernia surgery are about 100%.

Looks to me like Orion is the way to go...
You must log in or register to reply here.

B
How do you tell meat is going bad?