Just out of the Wind River Range, a couple days early, thanks to the blizzard conditions we encountered up in the high country. Thought I would add a quick note about an elk hunt that was designed more as a llama experiment to see if using llamas could benefit our efforts to hunt more remote areas when each year my body seems less willing/capable as our pile of production gear gets bigger/heavier.

Cameraman extraordinaire, Marcus, and I both drew tags for this unit. Rifle season opens on September 20th. If not for the kind invitation of Beau Baty at Wilderness Ridge Trail Llamas, I would not have applied here. The areas my research said would hold elk at this time of year were too far for us to haul all our production gear, food, camp, etc. and then retrieve an elk if we were so lucky.

Beau asked if I would let him come and demonstrate how his breeding line of pack llamas could handle a hunt like this. Having already been impressed when I saw his llamas last year, I accepted his offer to tag along and give us some more content on new ideas for backcountry elk hunting. Marcus and I applied with 1.5 point average and we drew. The planning then started, seeking the best areas, as close to the Wilderness Areas as possible, that would likely hold the best feed. My focus on feed is due to the peak rut period having bulls seeking cows, with cows seeking the prime feed. Find the prime feed and you find the cows, and at this time, you will find the bulls.

With the tags in hand and that plan in place, the film permit was acquired for this specific part of the Forest. Beau made arrangements to meet us in Pinedale two days before opening day. We used those two days to pack in and scout, hoping to have a plan in place by the time season opened.

Suffice to say, using these llamas was the most eye-opening thing I've encountered in quite a while. These are not your average llamas that are bred for wool. These are big stout dudes bred for the purpose of packing loads into the backcountry. For example, on our way out, the big old boy, Marshall, hauled two hind quarters and the skull cap. We weighed his total load as being 110#. He carried that for over seven miles though some really rough country and a heavy amount of wet and slippery snow. The rest of the llamas were all carrying 80-90# on the way out.

I wish the weather had not chased us out of the high country two days early. I think we would have taken another bull, filling both tags. But, with no break in our schedule I had to get home to dry gear, wash clothes, and take care of the necessary details of running the business part of this operation. Getting snowed in and losing a day is not option with the tight calendar we have.

The five days that included packing in, scouting, two days of hunting, and packing out, were enough to impress me to the point that you are going to see a lot more of Beau's llamas when we apply for tags in the coming seasons. Beau is one of the finest backcountry folks I've ever shared a camp with. His llamas are equally impressive.

When I get a break in between our next few trips I will add a few more details and a few more images. I hope the video does justice to how impressive these llamas are. I had hear so many stories of llamas being fickle, ornery, lame, etc. These llamas dispelled every myth I had ever heard about llamas and has me considering what ransom it would require to purchase four of them from Beaus' herd. I am told they are not for sale, only rent. I don't blame him.

The pack in. Seven llamas, two hunters, one cameraguy, and in this picture, our llama wrangler, Beau Baty. 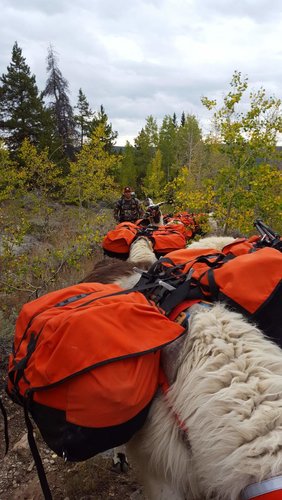 I've always dreamed of hunting the Wind River Range. This view explains why. We camped about 1,000 yards from the Wilderness boundary and hunted even closer to that boundary. Marcus shot his opening morning bull just left of this image a few hundred yards, about 600 yards from the boundary. If not for llamas to haul our production gear, I would have never considered filming in this country.

Sometimes the snow wins. It was coming down in big loads as we were packing and leaving, with a forecast for even more. Hard to film in whiteout conditions, so we loaded up and will return for the late cow season on the lower country, if I am in need of elk meat at that time. 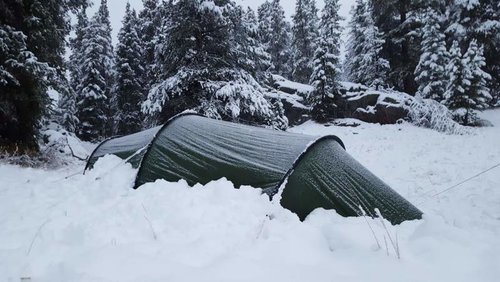 Packing out. Marshall and I are close pals after this trip. 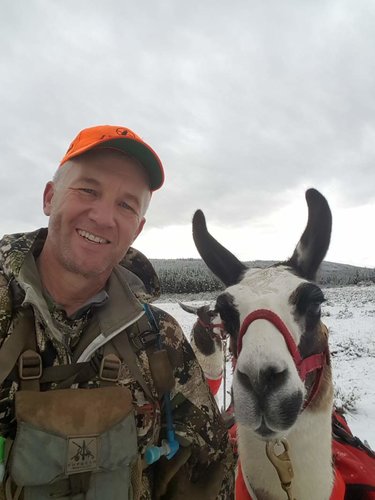 Here is a link to Beau and Kirstin's website - http://wildernessridgetrailllamas.com/

If you rent some of these llamas, you will want some for your own. Trust me on that one. My backcountry hunting career just got extended by about 15 years.

The resemblance is striking.
J

Crazy weather. Sweating your ass off a couple weeks ago in Nevada, and now getting dumped on in Wyoming. How does your body adjust, lol?

I thought those might be a fantastic use for backcountry hunting... I went the horse route - more temper attitudes and maintenance though I like the saddle. Look forward to the show!

That's cool Randy! I'm looking forward to seeing more of it on YouTube.

Sounds like the making of a cool episode! Congrats to Marcus on his elk!

That's is so cool. Cant wait to hear more and see the episode!

With that snow pack did you have to supplement their food before the retreat? I have never seen them dig worth a damn, always having to feed on top or do the digging for them, and digging sucks.

My wife and I have kicked around the idea of buying a couple of llamas. Reading posts like this helps.

squirrel said:
With that snow pack did you have to supplement their food before the retreat? I have never seen them dig worth a damn, always having to feed on top or do the digging for them, and digging sucks.
Click to expand...

Nope, no digging required. They ate what they found themselves. I was super impressed with how they handled the snow and cold. In the morning darkness when you shined a light on them, they were bedded down, letting the snow accumulate on their backs as if all was just fine.
J

Did you guys have to take them with you when you went out hunting or leave them at camp? Was it a pain taking care of them ?

If I had a llama rental business, my investments couldn't have enough orange covering them, making them as unlike an elk as possible.

I can see how this can be a game changer for back country expeditions.

Jasher said:
Did you guys have to take them with you when you went out hunting or leave them at camp? Was it a pain taking care of them ?
Click to expand...

We took two with us out on the hunt and left five back at camp. The two we took out for the hunt hauled Marcus' bull without a problem. Very low maintenance animals, at least these ones were low maintenance; not a PITA at all.
M

Look out. Llama prices are going to spike. There's a place here in the Root that gives them away. mtmuley

mtmuley said:
Look out. Llama prices are going to spike. There's a place here in the Root that gives them away. mtmuley
Click to expand...

From what Beau said, some llamas are not worth taking as a gift. He has spent years sorting and building a line of pack llamas that are bigger and more stout than most of what you see. Not all llamas are bred, built, or trained for mountain packing. His stories of experimentation make me skeptical about renting, buying, or accepting as free, any llama that is not proven in the mountains.
M

Understood Randy. Tongue in cheek post. The llama craze ran it's course around here. Looks like the animals you were using worked great. My point was it ain't that easy to just get some and go hunting. mtmuley

Proud of you for trying something different. I know your comfort level with horses isn't great but these llamas seem to fit the bill. Sure is nice to just have a light pack on and let the animals carry the weight. Can't wait to hear and see the story!

zadvorney said:
The resemblance is striking.
Click to expand...

Awesome!!
Glad those creatures worked out so well, Randy.

Cool. Looks like we were hunting the same country or an adjacent unit, could have used a little pack-out help from that string!
H

Does Beau actually sell pack llamas or just rent? Ive rented them once in Durango Colorado. Ive been saying that I was buying two for my own use for several years. After this year's back breaking pack in and the snow and recognizing that I was very limited on where I could physically recover a bull from, Ive decided to more actively pursue purchasing real pack llamas.
You must log in or register to reply here.

A Hunt To Make You Smile
2

A
Helping my Father-In-Law and my Father hunt Elk.