This was about as busy a weekend as it gets for my 8yo. Saturday schedule was as follows:
9-10:30am Fall travel basketball tryouts
10:45-11:45am attend younger brother's flag football game
2:30-4pm play tackle football game
4:30-7:30pm drive to cabin

We finally made it to our destination, but he was having a hard time trying to relax. He helped me get a fire going, but that didn't hold his attention/interest for too long. 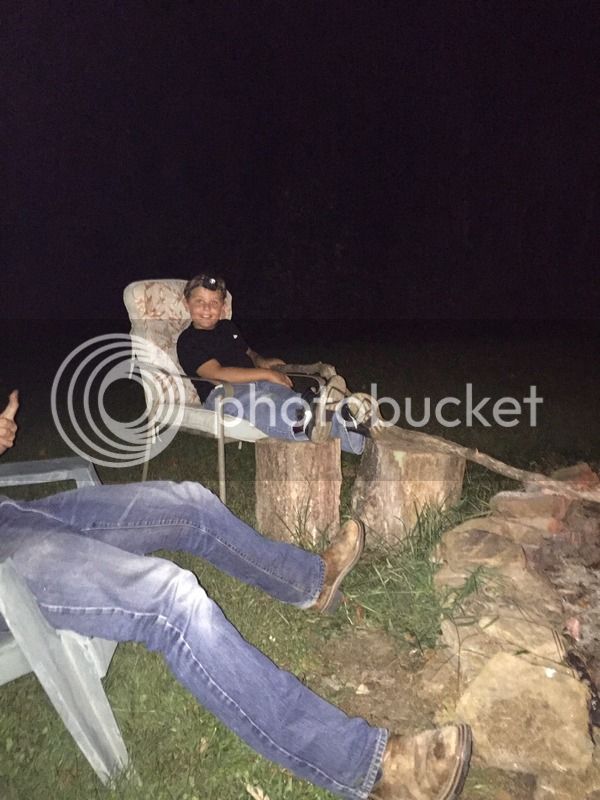 So we hopped in the truck with his cousin and went to do some deer shining. Farmers are running gangbusters getting the crops in so we had plenty of fields to shine in. We saw about 30 deer in about an hour. The highlight was about a 140" buck we first shined about 40yds off the road. To Spencer he was a "Beast!" ala Marshawn Lynch...

The next morning came early, but he was a trooper. He 'made' breakfast while I was getting the gear together. Nothing like powdered doughnut holes and diet Mtn Dew to get the day started. We sat in a ground blind that I had set up over Labor Day weekend overlooking a foodplot I had planted that same weekend. The downside is that area has received more than a sprinkle of rain since then. So, needless to say, food wasn't going to be a big draw for the deer... We had a doe come through at 34 yards, but she was moving fast enough that we couldn't get a shot. The morning sit was cut a bit short as we had a poop emergency to attend to.

After lunch we were passing time and he kept bugging me to go squirrel hunting. So, we took off on a short walk up behind the cabin to an area with some hickory and beech trees. We heard a few scampering and cutting nuts, but couldn't find them as the leaves are still way thick. While slipping down the atv trail, we heard something behind us. Squirrel! It was on the ground and moving through a briar patch. I got him set up on the sticks with the 10/22 (the stock of which he painted) and he waited and waited until it made it to the trail. PEW! First squirrel of the year! 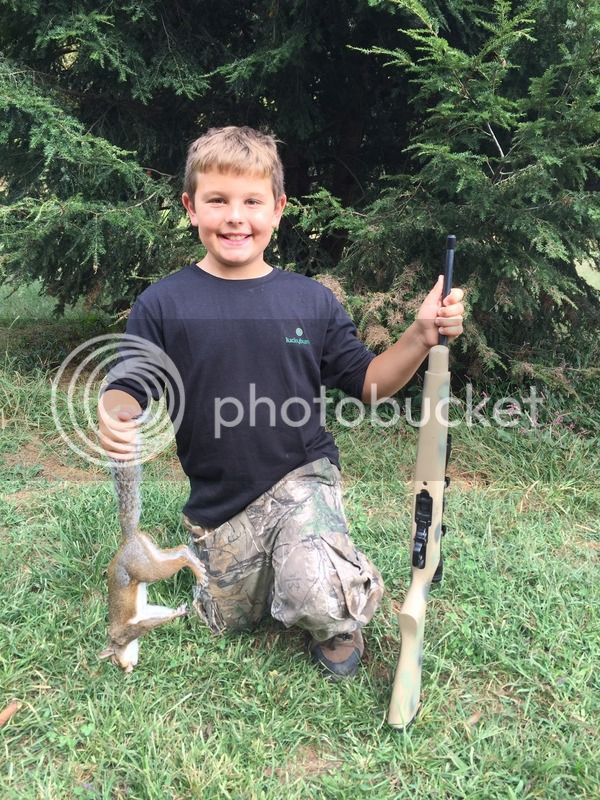 After getting it cleaned and in the freezer he asked that I let him know when it was 3pm as that's when he wanted to back out deer hunting. Mind you it's 80º so that's a bit early than I was planning on going but I'm not gonna argue. Since we had seen a deer out of the ground blind that morning that is where he wanted us to sit. I was getting a bit of gear ready and this is what happens when you leave an 8yo unsupervised with the face paint! 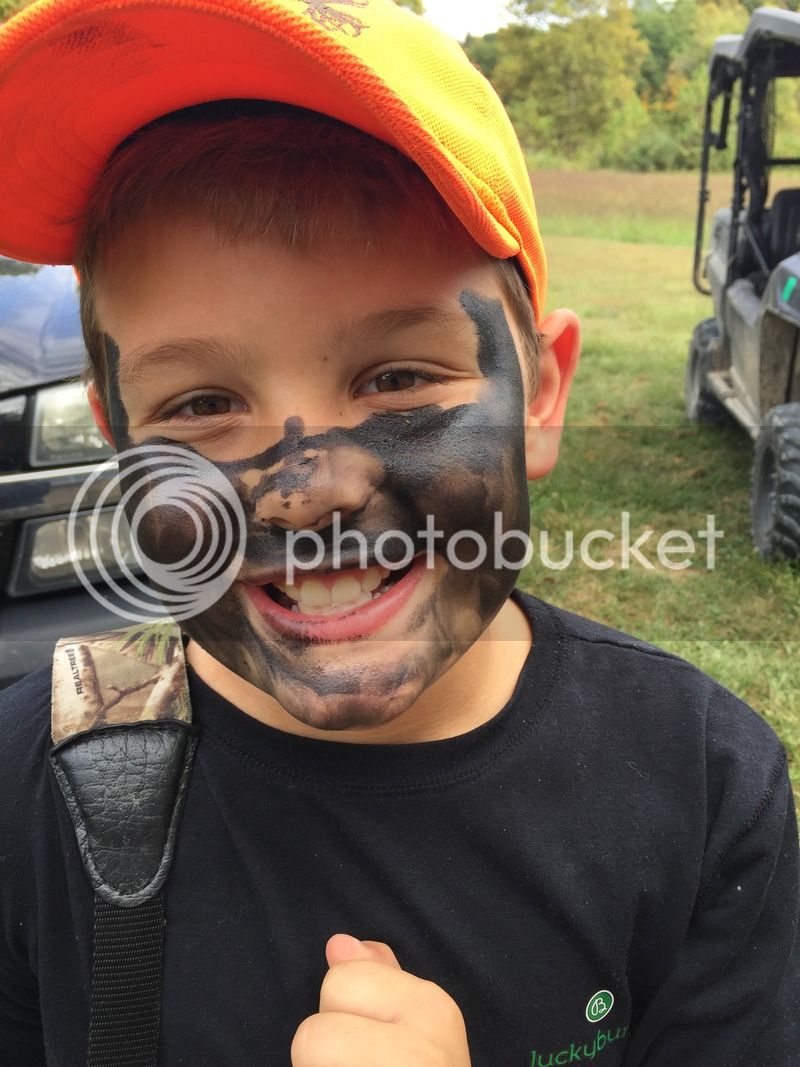 We got settled in to the sauna like ground blind and within mins both of us were getting drowsy and bam we both went out. ZZZZZZZZZZZZ... 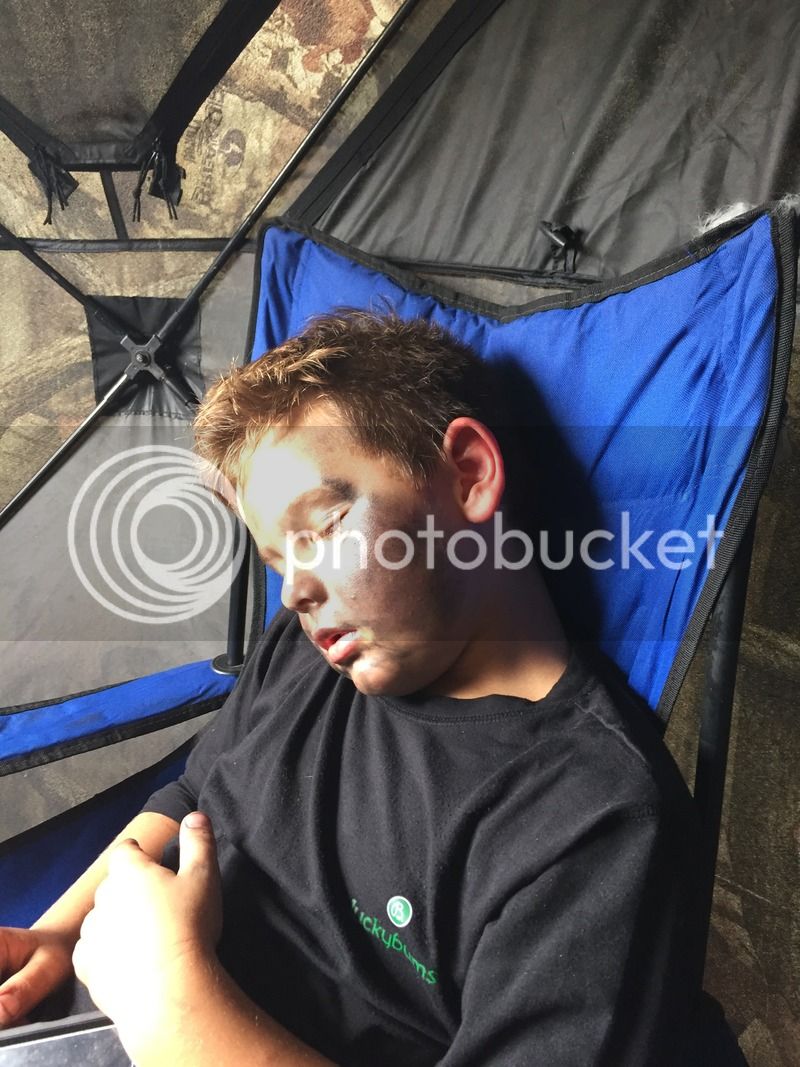 About 6pm he was passing the time texting his mom back and forth on my phone when it started to rain! Yippee, the stuff may finally grow! About then I notice something in the brush to our right that seemed out of place. Using his Leupold Yosemite's from Santa schmaltz I picked up a doe in the brush about 25 yds out. Way too thick for a shot and he couldn't see her from his angle. Likewise the rifle was on the field pod and it wouldn't swing that direction... The doe kept feeding and milling about enough that we were able to get him positioned to see her and he was now using the blinds window as a rest. Then the rain really picked up and the doe rounded a tree and started to head back into the woods instead of into the open powerline ROW where we wanted her. He's following her in the red dot when she stops to take a nibble in a small opening. BANG!
ME: "You dropped her!"
SON: "Does that mean I got her?"
ME: "Got her. She's right there."
SON: "Thank you Lord. I'm shaking I'm so excited!"

We didn't wait long as I wanted get on the bloodtrail if it was needed ASAP as it was raining. So he exited and I almost needed a leash to keep him from sprinting up to where the deer was. She didn't take a step. He made a great high shoulder shot dropping her on the spot.

Here she is after I drug her out of the briars. I think his smile fully tells how he feels about it... 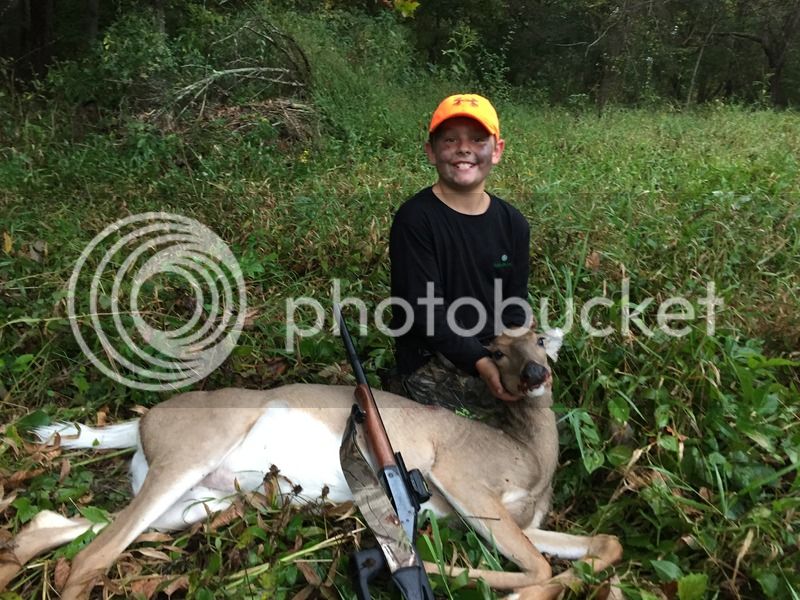 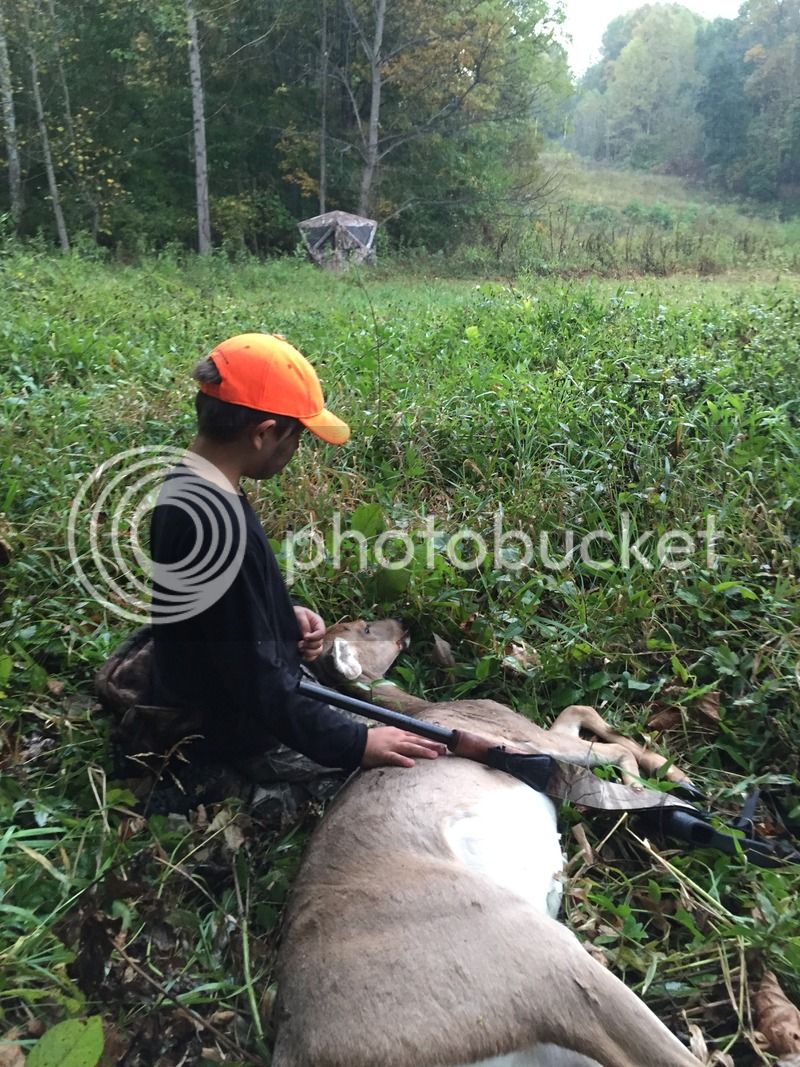 About as busy and fun filled weekend as I could help orchestrate for an 8 year old. An 8 year old who kindly reminded me on the way that he's now killed two deer at a younger age than I was when I killed my first (11yo). We rolled into the house at midnight. He slept most of the way, but I hope he has a good day at school as it would go a long way with his mom to keep allowing him to hunt the last evening of the weekend.
B

You're doin' it right Tyler.

That is awesome, and will be a memory neither of you will forget. Congrats to your son!
Last edited: Sep 28, 2015

Sweet! Congrats to you and Spencer.

Love it! Thanks for sharing the story and pics, great way to start a monday morning
D

That kind of schedule would...well, you know.

Good for you guys, awesome memories!

Very cool!! Congrats to you and your son!

Thanks for all the kudos! Spencer asked if I would text his picture to a poster here whom texts me pictures which I show to him. I said no, I'll just post them on Hunttalk and he'll see them there. His response, "You mean I'll be famous?!?".

Classic. Congrats.
If you ever want to have a really busy schedule, let me know and you can add 4 kids to your plate for the fall!!

Time well spent now will pay off when they get older and the schedule has less openings. Keep at it!
-Cade

Famous indeed. Great weekend.
You must log in or register to reply here.