This morning my wife, Pat, shot her best buck ever.

We scouted her area several days throughout the summer and in one day I looked at 176 bucks. Out of those there were 6 good ones, and I kind of thought the buck she killed was the best one I'd seen.

I took some video footage of him and I looked at it several times. The area he was in held another really good buck.

I couldnt make my mind up about this buck I called "big prongs", so I had my buddy Doug come out with me another day and take a look at him. Doug liked the looks of him too, and said it had "a hell of a prong".

Last night Pat and I looked over what I thought was the second best buck we saw in our scouting trips. He was in a good place to stalk for the following morning, and would have been a snap to kill. We then went and looked for "big prongs" and we found him about 2 hours before dark and watched him until it got too late to see him. Pat decided she wanted big prongs.

This morning we got into the area he was in before daylight and waited and watched. We knew from watching him on several occasions he was a really aggressive buck. So, right as it got light, we found him running off smaller bucks. We hunkered down in some sage and decided to wait him out as there was antelope all around us. Sure enough, he finally saw a small buck behind us and decided to kick the little dudes ass. He walked/trotted into about 125 yards from about 500 yards out. He just kept getting closer and the more I watched him the more I realized he was a great buck. He finally stopped broadside and Pat was all set resting on her pack. As soon as he stopped she shot and dropped him with a spine hit. She reloaded her ruger #1 and shot him again.

Its a dandy buck and we're both pretty excited about it. 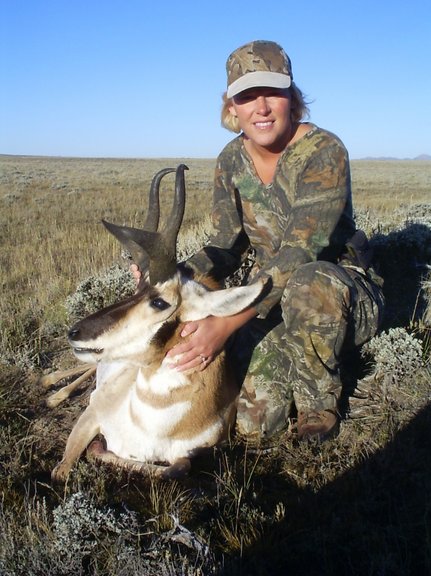 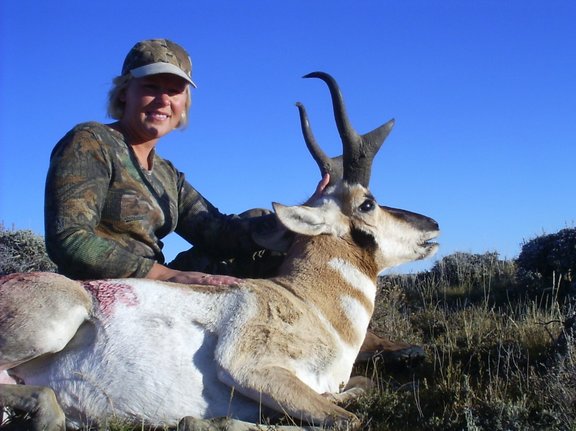 Buzz, that is a real nice buck.....congrats to you and especially your wife....a lot of hard work and scouting paid off big !!

Nice buck and nice work on the summer of scouting.

Congrats to your wife.

Gee thats a nice animal Buzz, shes just keeps knocking animals down every year, congrats to both of you.

Buzz, tell Pat congratulations on an awesome buck!! Those prongs are incredible, and it's got a nice shape to the top, too. Can I guess what it scores?

Congratulations and thanks for the story and pictures. That's a real nice buck!

Congrats to the Mrs. (once again!) Buzz, that's a nice speedgoat! Thanks for the share.
D

tell ya what,that name "big prongs" is well worth the name.He's a dandy of a buck.And congrats to the wife.Daniel

Congratulations to you and Pat! He really does have big prongs. He's long above the prongs too. Way to go!
S

Congrats to your wife and to you for being there with her. Is a great treat to have the wife taking animals to.
D

Congrats on another great buck!!!
You must log in or register to reply here.