Anyone here shoot traditional bows?? I bought a recurve this summer to shoot around with. If you think you'll like it don't buy one, it is very addicting, but boy is it fun. No sites, just pull'er back, point and let go. I think I could kill one out to ten yards right now. Heck, maybe I'll have yooper's range down by next fall!!!

I have a Bear Takedown Hunter that I shoot a lot.I mainly use it for bow fishing.They are addictive.

Yep, I still have one around but only use it to bow fish with also.
Compounds have'nt been around that long have they ?

I don't hunt with it nor do I drive a model t ford.
my opinion is that if that was the only choice,I would use one,again.
It is not and there are much better tools out there to get the job done.
I think it is great for the people that want to continue to use them but I am not one of those people.
Both the compound and traditional bows have one thing in common,limits.Either by design and performance or limits of the person using them.And yes they were a hoot to shoot and after shooting a compound for many years, my fingers do not miss the pain.
They don't have the calouses in the right spots any more.

In June of 1999, I went with him to a 4-day rendezvous. What an eye-opener, but still didn't shoot. Last spring I thought I would do a little shooting just for fun. Hubby and the bowyer decided on the bow, I got to choose the woods and colors. I am now the proud owner of custom ordered Great Plains Paragon Target takedown with a red curly maple riser and checkering, birdseye maple limbs with horn tips, 29# @ 28", 68 AMO. What a 'pretty' bow!! Ok, don't laugh at the poundage, I don't shoot very often. I'm more addicted to the computer.

Hey 1-pointer,
I have a Bighorn takedown 70# recurve I hunt with. Wooden arrows and Zwickey heads. It is deadly quiet. My only trouble is the amount of time I spend in the woods. Before marriage and kids, I used to have lots of time to go. Now I can just make time for the gun seasons on elk. Kinda ironic that priorities of what I used to use at short range has gone to an extreme long range rifle. I still bowfish with an old Bear recurve that Fred Bear has signed. Might sell it someday. It is a takedown.
T

PawsRI, Welcome to the forum and thanks for your post. There are some great guys and gals here. Glad to have you abord. Come back and post often.

I've been shooting a longbow a friend made for me for the last 3 years.
I mostly use a compound for hunting so far though.

glad to see some traditional shooters here!!!!! yep, me too i started with a bear kodiac recurve @45# still have it and still shoot it!

PawsRI ,WELCOME , i am also a big fan of Bob lee's work and hope to order a new bow soon but as always which one !!!!!

I see this OP is 20 years old, with no activity in that period of time, sure would be great to see a recurrence of that !

Have started with a longbow as a kid in the early ‘50’s, then into a recurve and years of club shoots and tournaments until my service in ‘58-‘62. Got side tracked with a compound for a number of years, but in ‘88, had a custom recurve from Brackenberry made and never looked back to any other form of hunting ! Not only for hunting purposes, they are fun to shoot for recreation also. For hunting, they certainly improve one’s hunting skills in order to get within a 30 yard shooting distance. Adds a real adrenaline rush. Outside of maybe a spear, there is not a simpler way to hunt........
T

I started with a coumpound and shot those exclusively for about 20 years. I've been shooting a recurve for about 5 years now. Its a newer ILF one. I find it a lot more fun to shoot than a compound. Compounds have gotten so accurate and efficient and I like the short range challenge so I hunt with the recurve more than the compound but I kill more animals with the compound. Sometimes, I just need to fill the freezer. It's too bad that more people don't give them a try but hunting now seems to mostly be about antler scores and few are willing to limit their chances...

Inherited my Grandfather’s Ben Pearson Recurve when he passed away 20 years ago. I had been a compound shooter since an early teenager, and was excited to try something new, if only to connect with my heritage.

I did some research, bought some arrows and started shooting. In short order learned more about the importance of spine, anchor points, release, etc, than I had in 15+years of shooting compound. I had always shot fingers, even with my compound; Chuck Adams was my hero, and the reason I bought a bow.

I took one whitetail buck with that recurve, and hunting with it on and off for a few years. Shooting and carrying it was fun and rewarding, even if it lowered my success rate quite a bit. I would take my compound out near the end of the season when needed. North Dakota’s bow season is over 4 months long, from late August to early January, with no shut down for rifle season, one of the longest in the country. Gives a person lots of time with the bow. And with bow tags over the counter for residents, and the opportunity for up to 4 buck tags at the time between all the seasons, it was a bowhunting paradise.

I was concerned with some cracks and de-lamination on the bow, and one of the local bow shop owners agreed it might not be the best thing to shoot for safety. I made a bow rack with some barn wood and mule deer antlers, and hung it up in the man cave. Back to the Mathews.

Last year I won a long bow in a Montana Bowhunters Association raffle. Beautiful 68” made by Pronghorn Custom Bows in Wyoming. It’s been fun to shoot, and I plan to use it exclusively now, retiring the compound. Montana’s bow season is short, but if unsuccessful, I can use it during the rifle season too.

Of course I’m always hoping I’ll draw a good tag for a limited, coveted species like moose or sheep, that doesn’t seem likely after 35 plus years of applying. I’m excited to play around with a new bow, of a new style to me. Can’t wait for spring bear and turkey!

I ordered a longbow last month and it should be in my hands in about 4 weeks. Looking forward to shooting it soon.

The first archery hunting I ever did was with a recurve. It was from a defunct company out of Wisconsin called Joy Valley Archery. Still have it. On Kelly Island by Missoula, MT I killed a whitetail doe with it. In the same way that there are blind and deaf people, I believe there are blind and deaf deer, and I believe I found one on the island that day.
Last edited: Feb 18, 2021

I have been shooting and hunting with a traditional bow for 30 years. I love the simplicity of it. I just ordered a new one this winter should be here in a couple months. I already fletched and crested my arrows for it. Just need to tune them when the bow gets here.

Epic thread resurrection! My dad made me my first bow when I was probably 5 or 6. It was made from an ash tree and he didn't really know what he was doing. He'd lived with some indiginous groups, around the world, when in the service and had watched them make bows, but he was largely winging it. It worked though, and I loved shooting arrows. I switched to a compound for a while when I was 12, or so. But by 16, I was interested in self-bows again and made my first. It took me a few tries to make a good one, because I kept rushing things, but eventually, I made some nicer bows. I killed my first deer with an ash bow that I built.
At this point, I still shoot sometimes, mostly with my kids (who all have self-bows of their own), but northern NY provides very tough hunting and almost no incentive to bowhunt. Our firearms seasons go from mid-October to mid_December and archery just gets you the first two weeks of October, when I'd rather be fishing. There's still something magical to me about launching arrows with a bent stick and string. If I lived out west, I'm sure the early elk seasons would have me back at it! 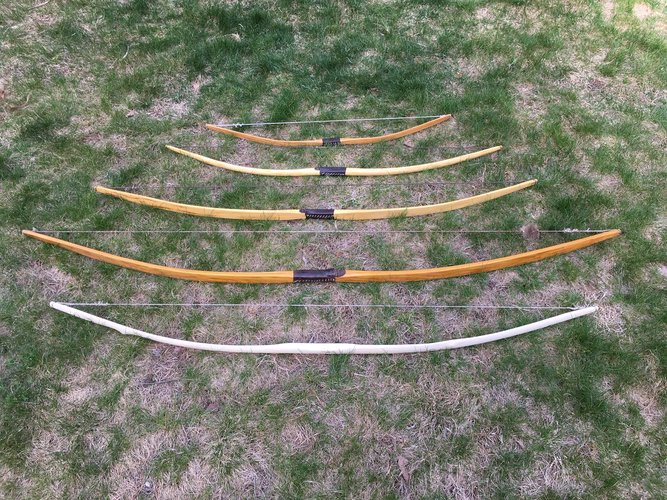 Good to see that some of you guys have added to this much ignored OP traditional post. Trad shooting is a true love for me, nice to see others also enjoy hunting in this simple form. I have made a few laminated recurves, but Dougfirtree’s self bows look real interesting. Nice work Doug, thanks for posting the photos. There are a few guys going into trad shooting for the first time, but by-and-large, we are pretty much a dying breed ! Good shooting guys.......
B

RickND69 said:
I have been shooting and hunting with a traditional bow for 30 years. I love the simplicity of it. I just ordered a new one this winter should be here in a couple months. I already fletched and crested my arrows for it. Just need to tune them when the bow gets here.
Click to expand...

mtmiller said:
I ordered a longbow last month and it should be in my hands in about 4 weeks. Looking forward to shooting it soon.
Click to expand...

What did you end up ordering Craig? The neighbor bought a self-bow from a bowyer in N. Carolina that I’ve shot a few times and am pretty intrigued with its weight and simplicity as opposed to my compound. Beautiful piece of Osage orange wood and all natural trim outs. Was pricey but almost as much art as it is a tool.

RickND69 said:
I have been shooting and hunting with a traditional bow for 30 years. I love the simplicity of it. I just ordered a new one this winter should be here in a couple months. I already fletched and crested my arrows for it. Just need to tune them when the bow gets here.
Click to expand...

MarvB said:
What did you end up ordering Craig? The neighbor bought a self-bow from a bowyer in N. Carolina that I’ve shot a few times and am pretty intrigued with its weight and simplicity as opposed to my compound. Beautiful piece of Osage orange wood and all natural trim outs. Was pricey but almost as much art as it is a tool.
Click to expand...

56" Toelke pika take down. Pretty excited.
You must log in or register to reply here.

T
What do you do with your old bows?

B
handgun/safety?? Am I overthinking this?
2 3