The Hopland Research property is 5,000 acres of classic blacktail habitat in CA, oak and chaparral. I put in for access early this summer and they felt I was worthy of access. 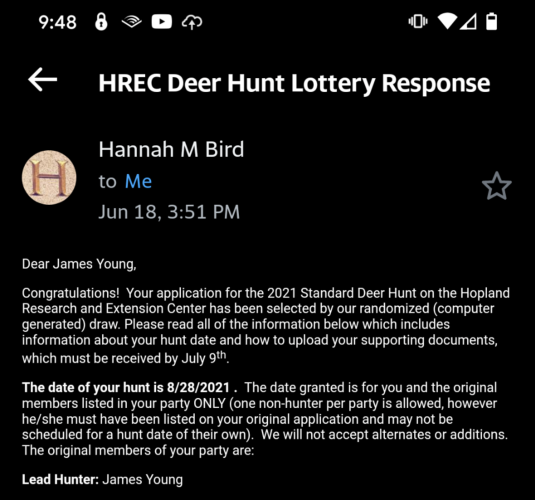 Me and the kid drive up Friday night, fighting Bay Area traffic we had to stop and get belly up to the bar (standard MO for a night before a hunt) at Russian River Brewery. 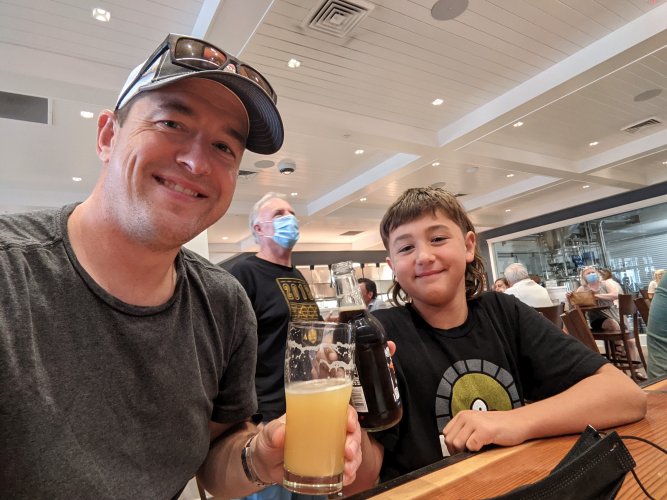 After dinner we finished the drive and set up camp. 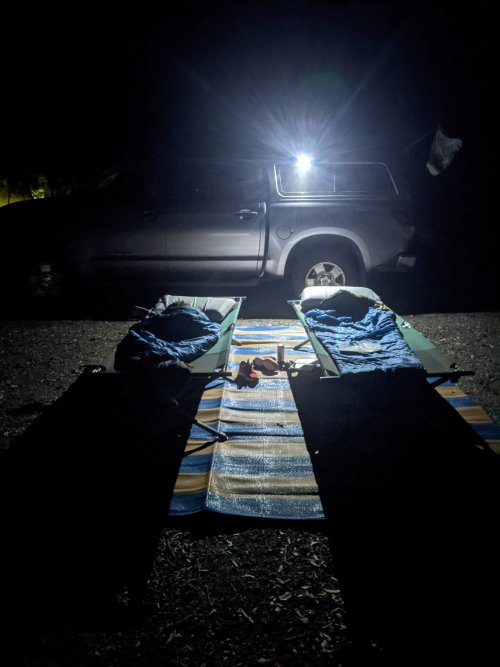 4:30am came fast, too fast for my hunting partner. 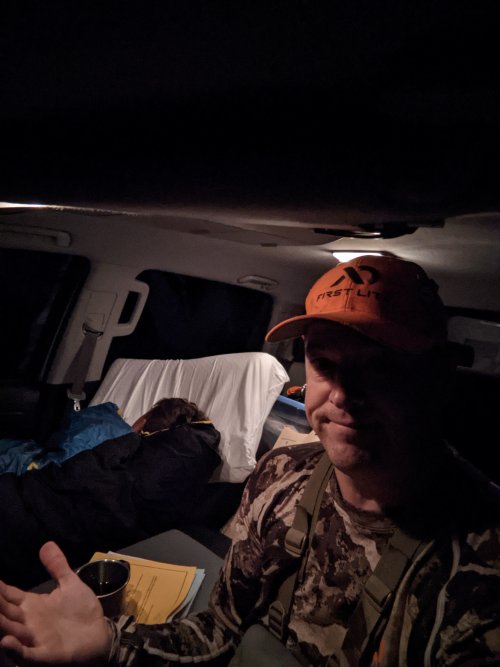 I'd only seen the property via the internet, I had a limited game plan that changed right away as all the other hunters went in up to the higher elevations. So I went low and hoped for the best. Drove to a pin on the map and found a heavy game trail so followed it for a bit. It looked promising. 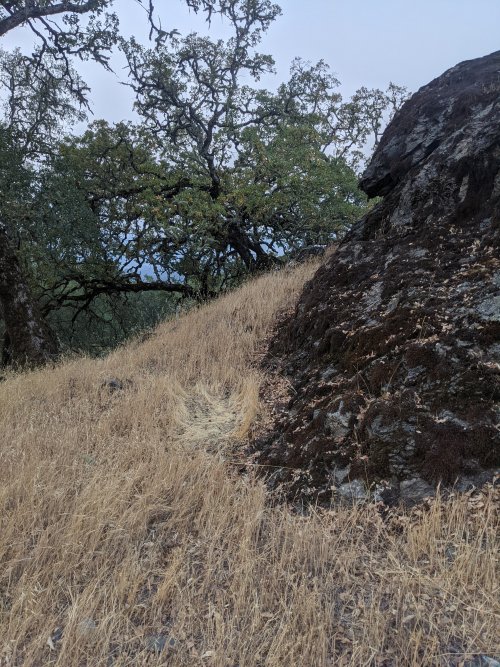 I climbed the rock in the picture above and after a bit spotted a buck 1200 yards away, I was shooting a 260 Rem, but it's no creedmoor so I needed to close the distance.

We rallied down the hill and put in a stalk. Coming in from a different angle I put us right on them, only to have a sheep fence in between us. They had us pinned, and I needed 20 more feet to the fence. As I crept up to the fence my shot angle was hosed by low hanging oak branches. At that point the two bucks decided they had had enough and took off.

Standing where the bucks were, we were up the hill, just lookers left of the "Y" stump. 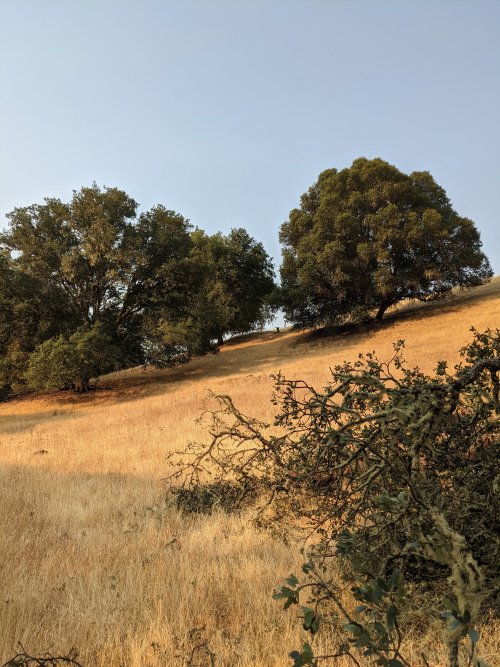 We headed back to the truck and got to another fence line that we had to cross. As I was lifting my son up to the cross member, I saw a doe on the hillside away from us staring us down from about 150 yards away. There was another deer next to her with its head behind a giant old oak. I put him down and got in position. The doe stared at us for probably 5 minutes while the other deer stood occluded behind the tree.

Finally she determined that we weren't a threat and started to feed again and the other deer came out from behind the tree and it was another doe. We hop the fence moved over to the truck which was to our right about another 150 yards away. We had breakfast make coffee and sat on the tailgate for a bit and those deer hardly ever moved.

A light bulb went off in my head that the deer on this property are probably used to people being out in the field but used to people that are paying them no attention.

It was starting to get hot so we decided to go check out some other areas on the lower end of the property. The was no shortage of deer, and they were quite interested in my son who looks like the feral kid in Mad Max 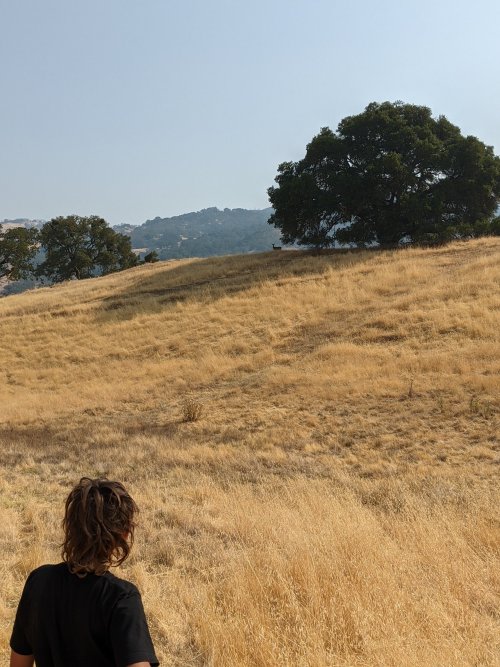 I wanted to check out a gated road that ran the top of a ridge, it was hot and my son had taken a beating from everything pokey in his boots and socks. Figuring this was my only day to hunt, I let him chill in the truck as I'd only be gone 20 minutes.....20 minutes right?

Sure enough ony way back from the end of the road, I spot a buck. He's not a monster but I only have one day to hunt this property and this is probably my only day hunting A zone this year. He was down a draw feeding heavily, but between the rise between us, and branches and old man's beard hanging from above I had no shot. There's almost no ability to move closer, our dead crispy oak and madrone leave make quakies look like feathers......so I wait....and wait. And send a text to my son that I'd be a bit.

20 minutes goes by and there were so many close opportunities but he had ninja skills and changed direction every time when he only needed one or two more steps.

Finally from what I can see it looks like he's moving away from me, so I decided to make a move around to my left and come in from up above him. I should have taped bubble wrap to my feet to try and be quieter, But I was able to get close and then the bucks snorted and I saw him bounding away. He channeled his inner mule deer and gave me a look back at 100 yards but once again I had grass low and a branch above and barely a shot.... I took a couple steps forward and my shot lane cleared and pulled the trigger.

He bounded away and I gave chase knowing I was getting close to the property line. I came over a hump and there he was standing broadside with a doe next to him that I had no idea was there. I wondered for a second if this was a different group. I looked back to see if there was a dead deer in between us. Then recognize his antlers that I had been staring at for the past 20 minutes.

I let another round fly, heard the "thwack" and watched him hop the fence onto the neighbor's property. He didn't buckle upon landing and was quickly out of sight. I called the ranch headquarters and let them know what the situation was. Apparently the neighbor has been a little weird as of late with the hunts going on, and he wasn't answering his phone.

The ranch manager said sit tight he was going to run down to the neighbor's house and see if he could find him.

It was starting to get hot, real hot. I looked for blood and couldn't see anything around me. Doubt was creeping in and I was starting to rethink my decisions. I decided to walk down the fence line and glass as much as I could of the property that I could see before the hillside bent away. Fortunately about 75 yards on the other side of the fence line I saw the deer laying in the tan grass.

Just then the ranch manager called me back and said we were good to go I told him I saw the deer and he said drag it back over the fence.

The good thing about hunting A zone in California is that it's easy to drag deer on dry dead grass and the deer aren't huge. The downside is that temperatures at this point were north of 90° and it's still dead weight and heavy to drag. That 75 yards might as well have been 200. 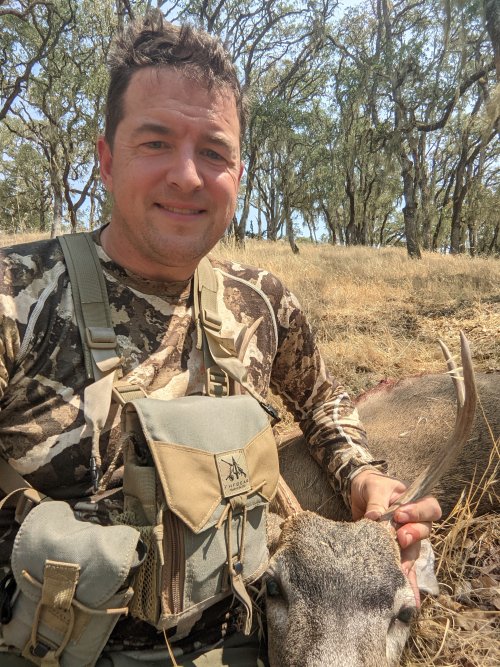 Once over the fence I'm able to gut him, and The ranch manager picked up my son on the way in. 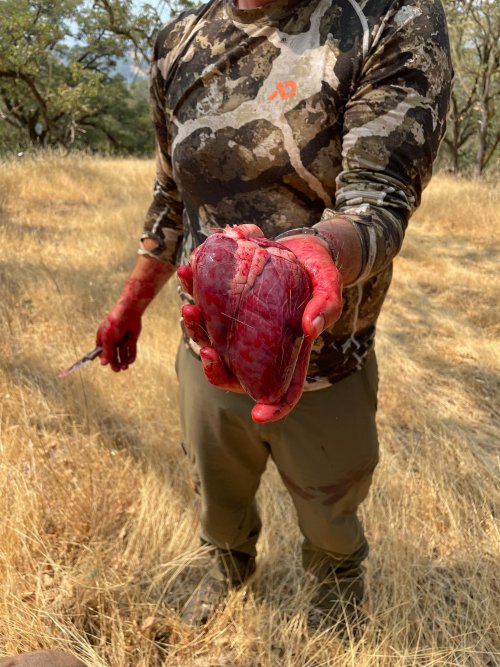 Back at headquarters they weighed the deer and took a number of measurements as all these data points are recorded and analyzed. As part of the hunt we are required to wear GPS throughout the property and they marry the hunters movements along with any deer movements for those deer that still may have colors on.

It was nice having facilities such as a full skinning shed and walk-in cooler. 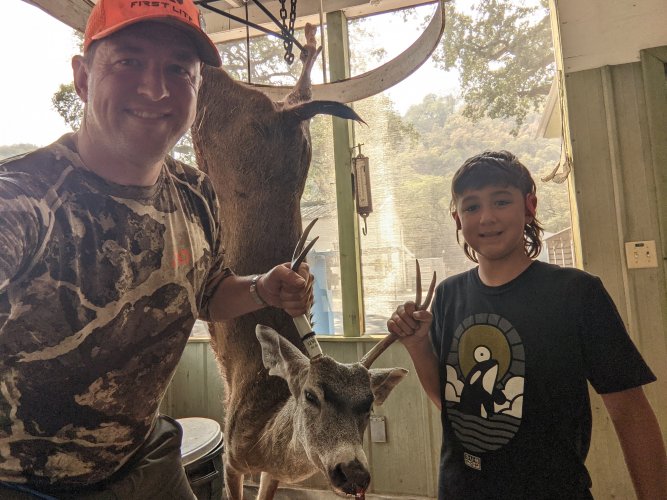 I got it all processed into the coolers and we headed home. It was warm. 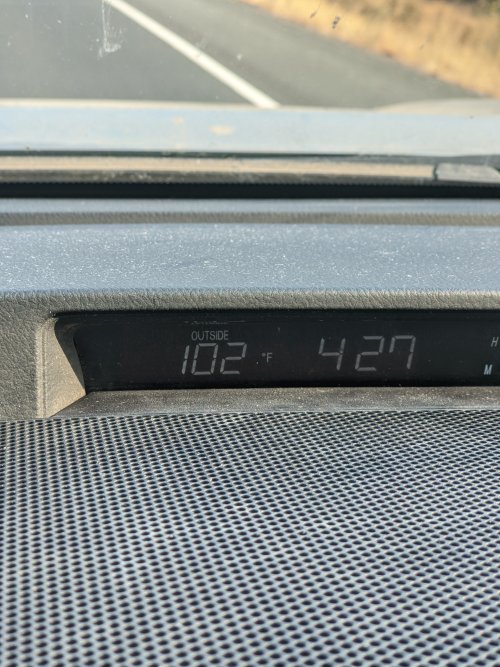 Our friends were having people over for dinner so my son and I joined a little bit late. But they kept the fire and the iron warm for us to give the heart a nice sear so we could share it with everyone. 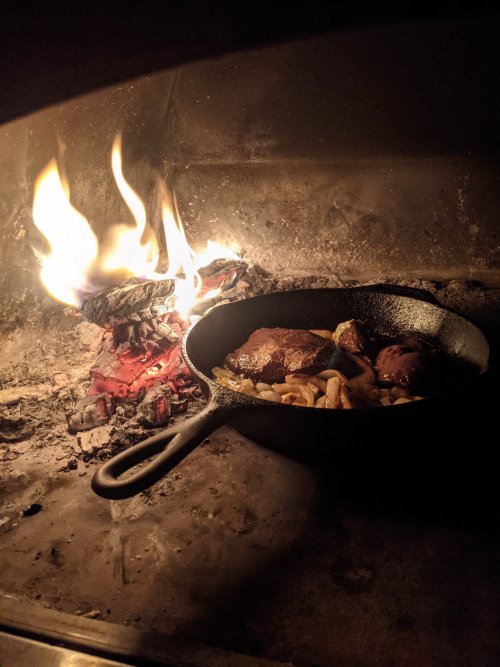 On the way home I realized the last time I had shot a blacktail in California my son was with me as well. He was just barely two at the time but pretty sure he's my good luck charm. Next year he'll be 12 officially and will have a tag of his own.
Last edited: Aug 29, 2021

Looks like a good time spent with your boy, nice write up.

Nice work congratulations glad to hear it worked out with one day. Is that a new program the state is doing ? Is it for research purposes?

Hot weather, or not, it looks like fun. Enjoy the time with the kids. Some day they move on and your days together get a lot fewer. Glad to see the two of you sharing these times. Congrats.

Great story and time with your son. Sounds like a cool property/program.
B

It really cool having a nice time with your son
B

Congrats on a representative buck . Give me a holler the next time you are in the North bay or on the way to Bodega....I'm on the way.

Very cool, I always enjoy hunting with the kiddos. My oldest told me last year, dad every time I hunt with you I kill a nice buck. I said we should do it more often. The heart makes my mouth water. Congratulations!

Nice @jryoung !! …. Ah the memories of A zone hunting; 110*, rattlesnakes, poison oak, pot farmers…. But early seasons, two tags, and deer you can carry out over your shoulder lol.
Great story and pics

Thank you for the write up, pretty cool.

Great story, kept me going through my lunch break.

Congratulations on spending such great time with your son. He will always remember it. Well done sir!

Great write up! Congrats on the nice buck and time spent with your son. A zone sure is an intersection time of year to hunt but I look forward to it each year.

A great adventure with your son. Congratulations on the adventure.
You must log in or register to reply here.

Kaedyn is a deer hunter!