Confessions of a Sin Fisherman

I have to make a confession or two. I catch a lot of fish and a lot of folks have assumed I was fly fishing. Well the truth is I don't know much about fly fishing. One of my best friends and hard core fly fisherman calls my spin fishing "sin fishing". I fish with a lot of guys that love to fly fish, and with the exception of only a couple of times, I usually out fish them. However, on a recent trip to southern Utah my partner absolutely destroyed me while fishing for trout on Minnersville Reservoir. I only landed two trout while he was yarding them out with his fly rod. He offered to let my try his fly rod out, but I didn't have a clue how to cast it, and didn't feel like embarrassing myself that day. However, I did decide that I needed to get more serious about learning to fly fish. So the very next day after I got home from Utah, I took an Orvis beginners fly fishing class. Mostly what I wanted to learn, and did learn, was how to cast. I figured the fly selection and reading the water I already had a pretty good handle on, but not so much the casting. By the end of the class I was doing pretty good though. I wanted to go try my hand at fly fishing that very afternoon, but Mother Nature decided to rain heavily on my parade. I decided to stay home and dry, which was a good thing, as we got a LOT of rain that evening. However, the next day (yesterday) was a new day, and I decided to run up the mountain, after working in the yard all day.

On my third cast I was lucky enough to land this chunky little rainbow using an elk hair caddis. 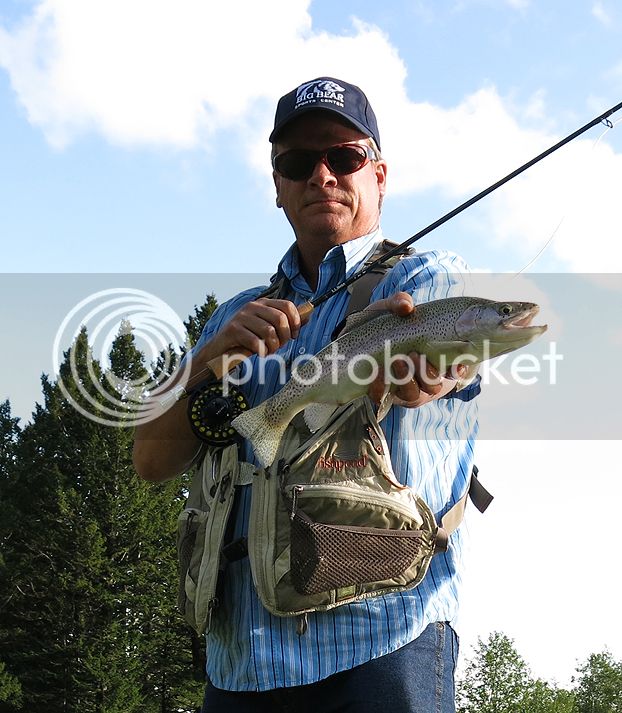 I fished for another half hour without a bite. So I decided to change locations and try another area that I knew held some big brown trout. I'd rather fish for them any day, anydangway. Upon arrival I missed a really nice fish with my first cast, and it stirred up the area. I proceed to fish for another half hour, but not a single fish rose. Then all of the sudden a few fish started to surface again. One of the fish looked exceptional, and I have to admit, I got a little too excited. I had a hard time concentrating on my form as I was casting and kept screwing up. This resulted in me spending a lot of time untangling my line, cursing my lack of casting ability, and thoroughly entertaining my wife. I looked like a hyper 5 year old on Christmas morning because I wanted that fish so bad. FINALLY, everything came together and I landed a perfect cast, with a just right presentation. About 30 seconds after my fly rested on the water, my heart nearly jumped through my throat when I saw the fish take it. The battle was fantastic and I worried he would come off at any second. It's been a while since I was this excited over a fish. My reward was my first brown trout on a fly rod, and I got to say I'm more than a little happy about it. It's one of the biggest brown's I've caught on any gear, let alone a fly rod. So sometimes lady-luck even smiles on guys like me despite me doing just about everything wrong...in this case patience and persistence did pay off. 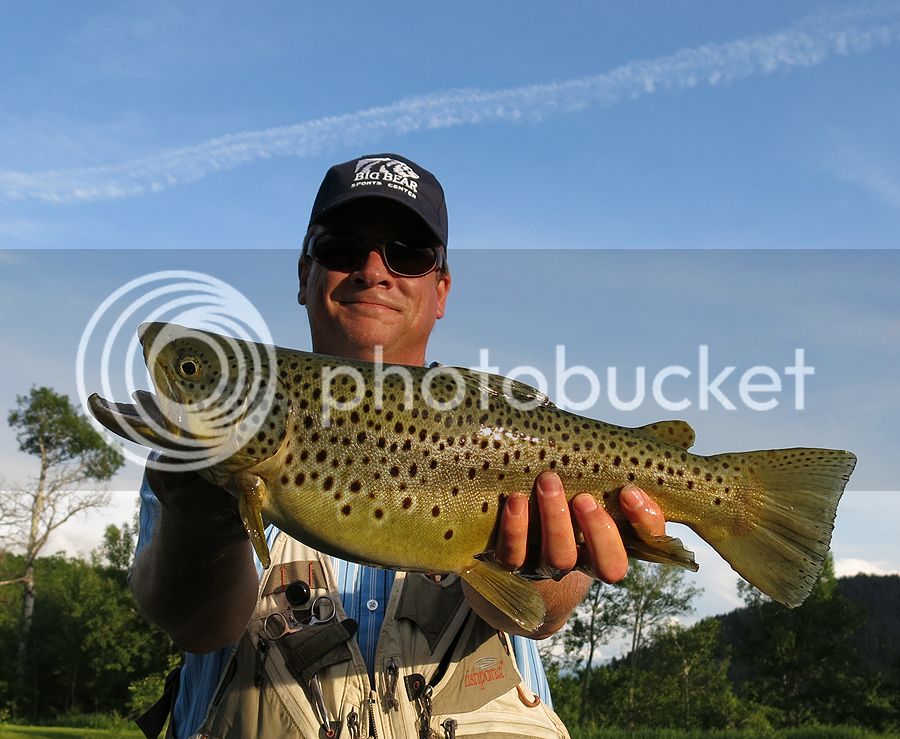 Kinda know now it is to be a sin fisherman myself. There is great satisfaction from making the fly that you catch the fish with, so that seems to be the next step in the evolution. Some folks get all uppity about whatever gear gets used. To me it's way more about getting out on the creek/river/pond/lake then what you are using to catch those fish.

Kinda know now it is to be a sin fisherman myself. There is great satisfaction from making the fly that you catch the fish with, so that seems to be the next step in the evolution. Some folks get all uppity about whatever gear gets used. To me it's way more about getting out on the creek/river/pond/lake then what you are using to catch those fish.
Click to expand...

I'm a devoted fly-flinger but will never look down my nose at someone who uses gear. Heck, I caught a 24 inch cutthroat in the Scapegoat using a Powerbait worm on a pink Zebco 33 a few years ago.

Forgive me fly-fishing father, for I too have sinned.
B

I don't look down on others either. I'm not even the least offended by my friend calling me a sin fisherman. In fact it usually makes me smile. Heck, I even get him to put down the fly rod now and then and sin fish right next to me.

I will fly, spin, or bait fish depending on what the fish want at that time and location. Being able to switch between the three has made me a much more successful fisherman. I love to fish and will use any of the methods without much preference. The only real preference I have is that of remote mountain streams.

Nice fish by the way!

I have caught trout/salmon on all methods, but fly fishing is all i do now, there is nothing to beat it in my opinion.
Matching the hatch and selecting the correct fly, outwitting millions of years of evolution with the trout.
But of course you must never tie on a nymph, dry fly only!

Here is what i do for a living during the summer in England
https://www.facebook.com/TheDevonFlyfisher?ref=hl

Beautiful, that is a slice of paradise.
T

If you like browns....once you get some casting practice, hit the water this summer at night with poppers and double bunnies. Wear protective eye wear. It's pee-your-pants fun.

I've been known to play on both teams when it comes to fishing. I love nymphing and catching the stone fly hatch. Every fish in the river comes up.

Plowing a 6" rapala through the heavy water by an undercut bank also brings a smile to my face.
Z

If catching fish on spinning gear is a sin, I am on the road to hell! Although I do some fly fishing, I have been known to tip a streamer with a Berkley Power Grub while tossing a streamer! Drastic times call for drastic measures!
I

Next best thing to fly fishing is landing one on a fly you tied yourself. Jump in a small reservoir in a float tube and a handful of deer hair poppers to go after crappie. It is pee in your waders fun!

Crawl on your knees up to a beaver pond and flip a black ant in the water. Things happen fast.

I hope you are hooked and only sin once in awhile.

If I aint jigen it aint fishin
Nice fish even for trout .
Think the coyotes can smell the fish slime on your hands ???

I'm in the same bout when it comes to fishing - newish to fly fishing but 90% of my fishing is spinner.

Awesome photos, and good luck with a new hobby!
You must log in or register to reply here.

B
I'd Rather Fish Anyway