Finally getting things organized enough to take the time to post a few pictures.

My buddy Tom and I decided to try for blacktails a couple years ago and we were both looking forward to the hunt.

The trip started out right with all the planned flights going smoothly and on time. To make matters even better the weather on Kodiak the entire trip was as good as it gets...2 of the 7 days we hunted I could not have found a cloud if I wanted to...wonderful weather.

The deer were pretty well scattered from the beach clear to alpine with a majority of the nicer bucks from alpine to 1/3 of the way down the sidehills. The second day, after looking at a lot of bucks, I decided to take this one: 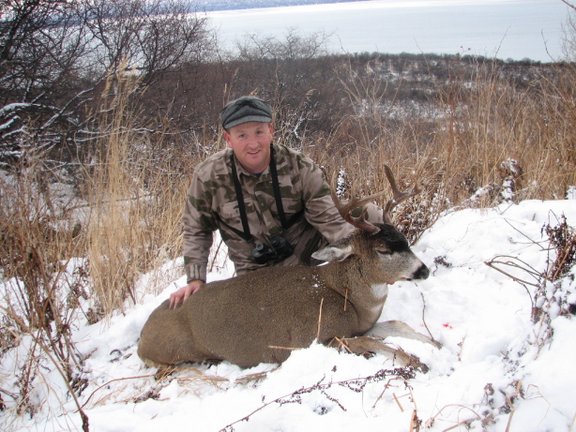 The next day Tom decided to take this buck after a long stalk and a whopping 30 yard shot: 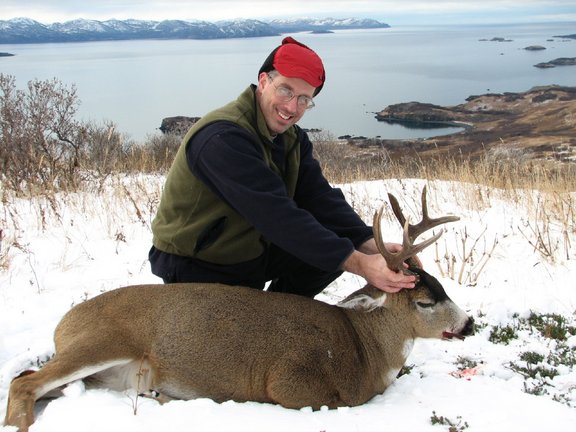 Day 6 after looking over a lot more deer I filled my second tag with this buck: 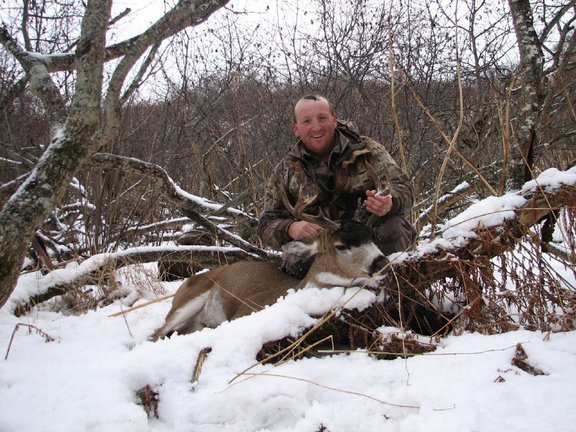 My buddy Tom killed another buck the last day just about like the others we took.

In between hunting blacktail we also did a bit of fishing catching halibut up to 87 pounds, dogfish, yellow-eyes, and cod. We also had crab pots out and caught a bunch of those.

Oh, and sea ducks...I managed to bag a harlequin drake, a bufflehead drake, as well as a couple oldsquaws.

The only tough thing about this entire trip was having to decide between fishing, hunting ducks, or hunting deer. Thats a good problem to have...
M

Congrats Buzz...looks like you were having a good time in those pics and some nice bucks taken! What was the date of your hunt?

....looks like your starting to sport a mohawk in that last shot
J


The only tough thing about this entire trip was having to decide between fishing, hunting ducks, or hunting deer. Thats a good problem to have...
Click to expand...

wow, that is a serious dilemma.
sounds like a blast.
B

I think we got lucky with the weather...the two "worse" weather days we had were both days I shot my deer. The one day it just snowed for about 2 hours the other day it rained for an hour and turned to snow for about another hour. I only wore rain-gear part of one day.

Mohawks are popular in AK...when in Rome...
I

Congratulations and thanks for the pictures!
M

So I take it this was a "boat hunt"? If time allows Buzz it would be great if you can PM me any particulars on your trip...the "what you'd do/not do again segment" and who you went with if you don't mind. You're about the 4-5th HuntTalker that has chased sitkas over the past couple of years and I've been keeping notes to plan a trip hopefully in 07 or 08.

Thanks in advance!
B

The first thing you need to consider is the deer populations...they can crash big-time. Providing thats no issue...there really arent many other issues.

We went with Ninilchik Charters out of Larsen Bay owned by Mike Flores.
We hunted different areas each day with the exception of a two-day stretch in one area that was real good...stayed there a couple days. They arent guides, just transporters and cant even glass deer for you...which is no big deal. You dont need any guiding on there anyway. We found that blacktail hunters are no different than hunters everywhere else...most are lazy. I think a majority of hunters expect deer pretty close to the beach and pretty easy. I suppose with the right weather that could happen. While not incredibidly difficult, the stretches between the foot of the steep stuff to alpine (while short) was steep.

It was almost a given that if you went up to alpine in the more steep areas, the hunting pressure was near zero...and the deer were not real smart. I mean bow-range and just stand there. We hunted the two short days on each end in easier areas that had been hunted hard and while there were still tons of deer, they were much more jumpy. Still not a problem to get good bucks though. I wouldnt expect to shoot deer off the beach, could happen but be ready to hike.

Also, they're a bit larger than people think...stout little dudes and one deer boned with cape and horns is a pretty good load.

I wouldnt personally do a backpack hunt for them unless it was real early in the year. Too many problems associated with it for my liking. The reason I liked the idea of the boat was for the following reasons:

1. If the weather sucks you can get out of it and do something else if its too bad to hunt deer (shoot ducks, fish).

2. The deer quality is more a function of how hard you hunt and a little luck. Would you get a better deer on a backpack hunt? I dont know, from what I saw, I dont think so.

3. Not having to worry about the dead deer (bears) was a big plus.

5. I wanted to bag at least a harlequin duck and catch some fish.

6. I also wanted to be able to get out of the real nasty weather that Kodiak can dish out.

I'd recommend trying to round up 4 guys and hunt in teams of 2. Book the entire boat. I'd rather know everyone on the boat, not that its a big deal, but the other two guys on the boat were clowns. Nice guys, just not real bright.

Things to think about are that the sea duck hunting improves later in the season, fishing is always good.

Oh, and I'd charter a flight ahead of time from Kodiak to Larsen Bay (we did). Other guys paid when they got there and then paid freight to get back to Kodiak (more expensive if you bag a bunch of fish and deer). We paid a set price ahead of time for the charter and there were no additional freight charges.

Been wondering where you were. Good pics, glad it went well for ya.

Looks like a fun trip. One year here soon I hope to do one of these deer hunts!
M

Thanks again for the info Buzz...a boat trip is really what we have in mind and the ability to get up above the beachcombers without sleeping out with the bears would definately be a plus. Doubt we'll look much into the duck hunting but the fishing on crappy days might prove a plus...and thanks for the tip on the charter!

Wow, what a great trip! You were extremely fortunate to have that kind of weather. Great pictures.
K

Thanks for the info Buzz. We're planning on going up in the next couple of years. Can't wait.

Sounds like a perfect trip Buzz....thanks for sharing your homework on it.
B

BuzzH, between your Sitka blacktails and Montana whitetails your are starting to become my new hero. Great photos and bucks on both threads. I'd be lying if I said I weren't a little jealous.

This was definitely the year of the blacktail for HT. Congrats Buzz!
T

Awesome, congrats again Buzz. Those are some really good looking bucks. With everyone on here hunting sitkas I'm thinking it might be time to start my own preliminary plans. I'd love the boat hunts just for the fishing you can get in.

I think we got lucky with the weather...
Click to expand...

Awesome pictures. I like the Mohawk. I didn't sport one up there this year but maybe by the time I go back I'll have one

I think the moving around is a big Key. Being Mobil and able to change locations is pretty important. We hunted the 2nd day in the exact same place we hunted and killed a deer the first day and all we got were bears all day.

Any pictures of the Fish and Birds ? We caught those Ugly Rok fish looking things and Cod. Just wondering what a Halibut looks like since we didn't catch any

I likethe boat Idea better too. When we had 60 MPH winds it was nice to jsut hear it through the cracks of the doors and barely hear it over the heater on board.

Thanx for the Story and info !!
B

I have a couple photos of the fish and fowl.

Biggest halibut landed, one bigger one was hooked probably in the 150lb range. This one was 87 pounds. 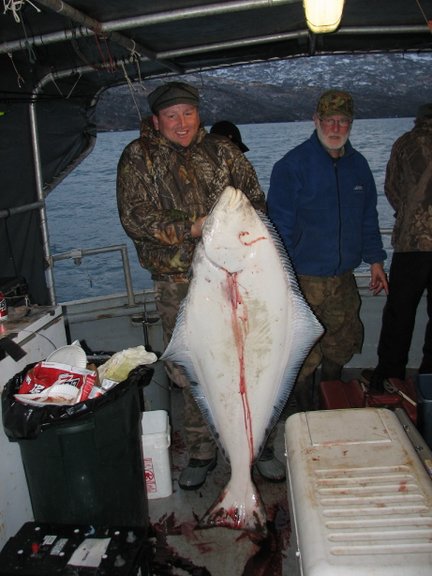 I only took a couple pictures of the ducks, but heres the drake harlequin that I shot: 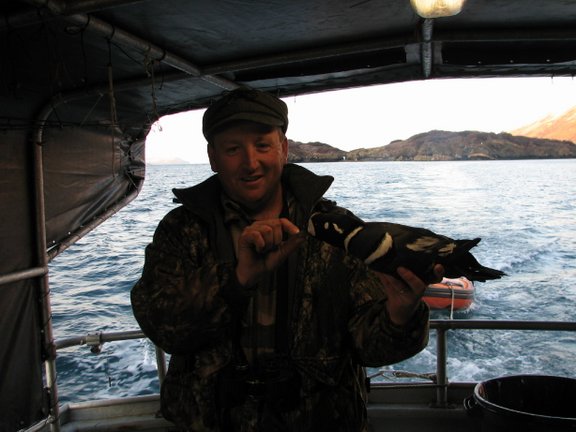