Another box is checked

For many years I promised I would hunt elk in this high alpine unit in Colorado. Since it only takes 2-3 non-resident points for 1st rifle, I was not going to apply until I burned a big pile of points in a different unit in 2016. This year I knew my 3 points would get me the tag.

At this point in my hunting life, the priority placed on a hunt is 1) the people I am sharing the hunt with, 2) new landscapes the intrigue me and are on my bucket list of places to explore, 3) the intangibles of season dates, hunting pressure, age class, etc.

This is a five-day season, but do to our calendar and need to be COVID tested prior to traveling out of state, I was only able to allocated 2.5 days to this tag. So, we went down two days early, giving time to explore and scout. It is a long drive with a trailer of llamas to this trailhead. Then almost seven hours to camp. By the time we got camp set on Thursday night there was no time to scout, due to a trail shortcut littered to the point of impassable by blowdown beetle killed trees.

First morning was out of a playbook. Climb to the first glassing knob, seeing nothing, break out the bugle tube to amplify some cow calls. The first sequence had a bull screaming and coming our way. Dang, don't get too close, we don't want to spook you before season opens tomorrow. As he got closer, we circled uphill and to a different drainage to keep our scent from him.

A short hike later and a much bigger bull was cruising a ridge, working his way from the grass benches above timberline down to the timber where he would bed for the day. A surprising amount of sign up here at 12,000' elevation.

Dreams of a bull sauntering to our opening morning set-up was my last thought as I drifted to sleep. Normally I sleep well in the high crisp air, but I was tossing and turning all night. I suspect the shortened hunt has my mind bouncing from thought to thought.

Up and the trail an hour before shooting light, we were in our preferred glassing location based on the call-in sequence the morning before. Yet, like almost always happens, our best calling and strenuous glassing produced nothing. Dang, so much for the story book ending.

Hiking time. Three cows with no bull in tow. Then four more cows. Dang, lots of elk moving around, a void of antlers.

Got a bit higher and decided to glass. Within twenty minutes I had a bull to our south moving NE and downhill. I estimated he was headed to a small park the four cows were headed to. He was broken and bugling, but offering a great chance to intercept him if we dropped 400' and side-hilled about 1,000 yards. I looked to Michael and Kyler and told them to follow me....and fast.

By the time we looped downwind to account for the downslope morning thermal, the bull was now on the ridge above the park. He was on the south side and we were now NE of him. He was bugling frequently. I hope he would appear in a small opening in the thick timber. No luck, just too thick.

I told the crew I hate to call and let him know where we were located. But, given he was not coming out, I had no choice.

A couple whining call cows and he bulged. As soon as he stopped, I whined again. He bugled and you could hear him coming our way. We were set up. It was only 120 yards across this little glade. I was on my pack. Both cameras were running.

He stopped bugling. We could hear him raking. Kyler got some footage of him a bit back in the trees working over a small spruce. I had no choice but to cow call again. When I did, the bull stuck his head and neck from behind a 20' spruce. Damn it, take on step forward.

As I started to tell the camera guys to be ready for a shot if he moved, he stepped left across the four foot opening. I tried to reposition my cow call and stop him, only make the worst call if my adult life. The bull did stop, but now fully hidden by the trees to his left. He wasn't comfortable and turned straight away, moving into the same trees from which he first emerged.

I whined again. He stopped. I laid it on like I was the irresistible mate he had been looking for. He turned and came back to the same spot he first stuck his head from. This time, he revealed even less of a target. "Give me a break."

I had the crosshairs on him as he turned and headed back into the timber. I gave one last ditch effort to stop him. He stopped and turned broadside (head left), but obscured by the first set of brush. I put the crosshairs on him, only to realize the eight-inch shooting lane provided was a perfect heart-lung situation. I mumbled something to the camera crew and the trigger released.

He disappeared, making a hell of a ruckus in the deadfall, Kyler, having the wide angle announced the bull was crab-walking sideways. Immediately we heard the unmistakable sound of crashing among the deadfall. We couldn't see him, but all indicators indicated he was down.

We walked the short distance and there we was, piled up on a nice flat spot merely 50 yards from the shot. He was what I thought he was; a large-bodied old boy with three broken tines. Inspection of his ivories showed hardly anything protruding from the gum.

In our 13 seasons of filming, never was a bull as cooperative for the camera as this bull. Not the size of either bull we scouted, but with the compressed timeline and his camera-friendly behavior, his fate was written the second he started coming our way. 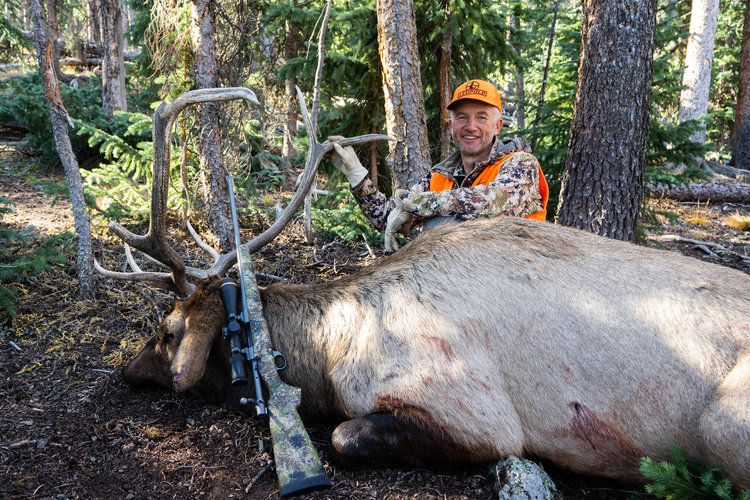 Thank God for llamas and strong young camera crews. We were able to bushwack one load to our camp without much elevation change, just a lot of bobbing and weaving to find a trail through the deadfall. For the llamas, we have to weigh/balance each load to the pound. This guy was 245# of boned out meat. That is the largest since we started weighing these bags with a calibrated scale. The meat accounted for 2.5 of our 4-llama capacity. The rest that couldn't be loaded on the 1.5 llamas was put in our packs.

On the way in, we were all a lot more enthusiastic and carrying much smaller loads. 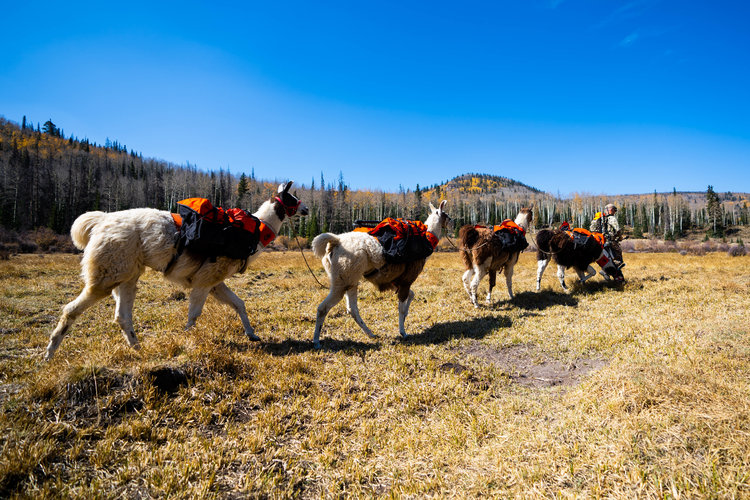 I am thankful for this hunt, however condensed it was. It is some of the neatest country I've ever hunted elk; more impressive than I expected. And plenty of elk for those willing to trek these distance and haul the loads required. Not sure I can do that hunt by the time I build 2-3 more points. But, once is good enough if one does it right. This one, thanks to some great luck, was done right. Thanks to Michael and Kyler for their great work and optimism.

I love exploring new places with a tag in my pocket. I could go hike these places, but my hiking never puts my mind and senses on the keen awareness that comes with pursuit of game. The two experiences just don't compare, at least for me. Hope you all go explore some new place you have always dreamed of. Odds are you will be glad you did.
Last edited: Oct 13, 2020

Congrats, my man! Getting me all sorts of excited for my 4th rifle hunt out here in CO!

That’s a lot of excitement in a short amount of time! What a chunker. Congratulations Fin!

Congrats Randy! That bull looks to have a huge body! Great write up.

Awesome Randy. I’ve been saving my points for a 1st rifle. By the time I’ll be ready I’ll have 4-5 points though. I already have 3.
Being that my daughter was born today it might be a tough sell to my wife next year.

Nice but your making me think i'm old when your priorities list for hunts are in line with my own. Although I want those with meat for the freezer guess i'm still young and greedy.
F

Lots of work and sweat with a great pay off !!
H

Great story. I look forward to seeing it . Congrats!

Looking forward to the (shortened series) of day by day YouTube stories, and finally the Amazon Prime version. High country Colorado adventures will present some amazing vistas for the camera to capture.

Congratulations to the entire crew! I’m glad that you were able to use our public lands for such a “high” and lofty goal as a two mile high bull.
M

That ol’ boy had one hell of a final rut... busted tines and scabs on his ears.
S

That is awesome. 245# of meat to pack out 7 miles would have been brutal if not impossible without those llamas. I don’t care how good of shape you are in. That is a long distance and a lot of meat if you were solo

Congratulations Randy! Can't wait to see the video. Those llamas sure are amazing.
N

That dude is a fighter! Congrats!!
You must log in or register to reply here.