Thinking of picking up one I the vanguard s2's in 257 for no other reason than it seems like a really neat caliber. For the most part it's going to be strictly a deer and pronghorn rifle but I've read a lot of people swear by it for elk as well. Just looking for anyone's experience positive or negative with either the vanguard or the .257.
B

I've only ever shot a 257 Wby at the range, but I have seen it used a ton on pronghorn and 1 elk.

The one elk I saw killed with one (raghorn), died just like any other properly hit elk. Works great on pronghorns, no doubt about that.

Forgot to add that I also saw a NM oryx shot with one as well...did a great job on that.
M

Generally yes, as the shooter is a little more steady than when he/she is trying to settle the cross hairs on a 350+.
B

Wanted to give a fair perspective to the OP on what I'd seen the 257 used on...maybe someday if I ever shoot an elk, I'll be able to answer your question.
M

jryoung said:
Generally yes, as the shooter is a little more steady than when he/she is trying to settle the cross hairs on a 350+.
Click to expand...

Thanks guys I appreciate the input ... I've been reading up on it for awhile now and other than cost of factory ammo I haven't seen a whole lot of bad said about it. I figured guys here would set me straight one way or the other
B

I can put you in contact with my buddy, that guy has researched and used the 257 more than anyone I know...including at least a half dozen vanguards.

I believe your sarcasm meter is broken.

257 is awesome! buy one... save your brass and resell it to help with ammo costs, those $37 spitzers work great on deer/pronghorn. it will work on elk but you probably should step it up in bullet choice.
S

Those things are like laser beams. I would definitely make sure that it was shooting only premium bullets, though, as that velocity will be tough on bullets. For elk, I would stay in the 120-grain weight for bullets.

Thanks everyone I'm going to run to the store today and see if they have one on the shelf, I've got a couple gift cards in my pocket and a new scope in the safe so it won't break the bank to have a new fun gun to get dialed in this summer.
S

Plenty of gun for just about any North American game. Use a quality bullet for larger game though, 110gr accubond or 120gr partition, would be good choices. At the velocity that the gun shoots at it has a tendency to blow up smaller bullets on impact. Its a killer caliber...literally.
J

I am the guy Buzz is referring to. The 257 is a freakin awesome caliber if you realize its limitations. I would not hesitate to use it on anything that walks in NA save for probably Grizz. It would propbably be ok there as well but would just personally want a little more horsepower. If you handload you can really make this cal. shine. As mentioned the 100 gr TSX and 72 gr. of RE22 is stepping out at 3720 fps and believe me when I say speed does kill. I have killed prolly 2 dozen critters with it and nothing has taken more than a couple of steps. I have 5-6 buddy's that use them and it has been the same for them as well. Very little recoil for that much power is what I really like. It is the poster child for fast and flat. That being said, my limit is 600 yds. After that with such a light bullet it just runs out of gas. The other down side is it is very overbore and will kill a barrel in 1000 to 1500 rounds depending on how you shoot and clean. It is not a target rifle. Sight it in and hunt with it. I do understand why it was Roy's favorite. You have to use one to really understand.
B

I had a custom heavy barreled .257 Weatherby that I hunted with for a few years. I killed just over a dozen animals with it. It's almost like cheating. Anything out to 400 yards you just hold the crosshairs steady on it and squeeze the trigger, the walk over and punch your tag. I nick named my rifle "Point and Shoot" because it was so easy to be successful with. The fact of the matter is I never missed a single big game animal with it. The only reason I sold it is because I moved and the new area I moved to is not very conducive to packing around a super heavy rifle. I've often considered buying another .257 Weatherby because it was so effective on deer and antelope. It's a fun gun to own, shoot, and hunt with. The only negative is feeding it. It's not cheap to feed ammo. If that's not an issue for you, then buy it.

Had the 25 roy in an accumark about 15 years back. Always wanted that particular rifle and the caliber was simply a bonus. Others are on the mark about factory shooting costs. Now that I'm loading I wish I had it back...a tackdriving sledge for sure.
?

I would've bought one quite a while ago if they made the vanguards with a 26" barrel. For 95% of my hunting I think it'd do a way better job than a big magnum.
U

I love mine. It has taken a 344 bull and numerous deer and antelope. I used the Barnes for the elk and the 110 accubond for everything else. It is a fun gun to shoot and will be my son's 1st real rifle (22 doesn't really count). I will say I felt a little under-gunned for the elk but I had a complete pass through breaking the off side head of the numerous on the way out. The bull never took another step after the shot but did stay on his feet for about 20 seconds.

Well you guys really suck at talking a guy off the ledge so I went and picked one up tonight.... I hope it's everything I've read it is.... I just ordered rings and bases and have a brand new 4.5-14x40 Nikon in the safe just waiting for a new gun. I really appreciate the comments fellas it helped a bunch 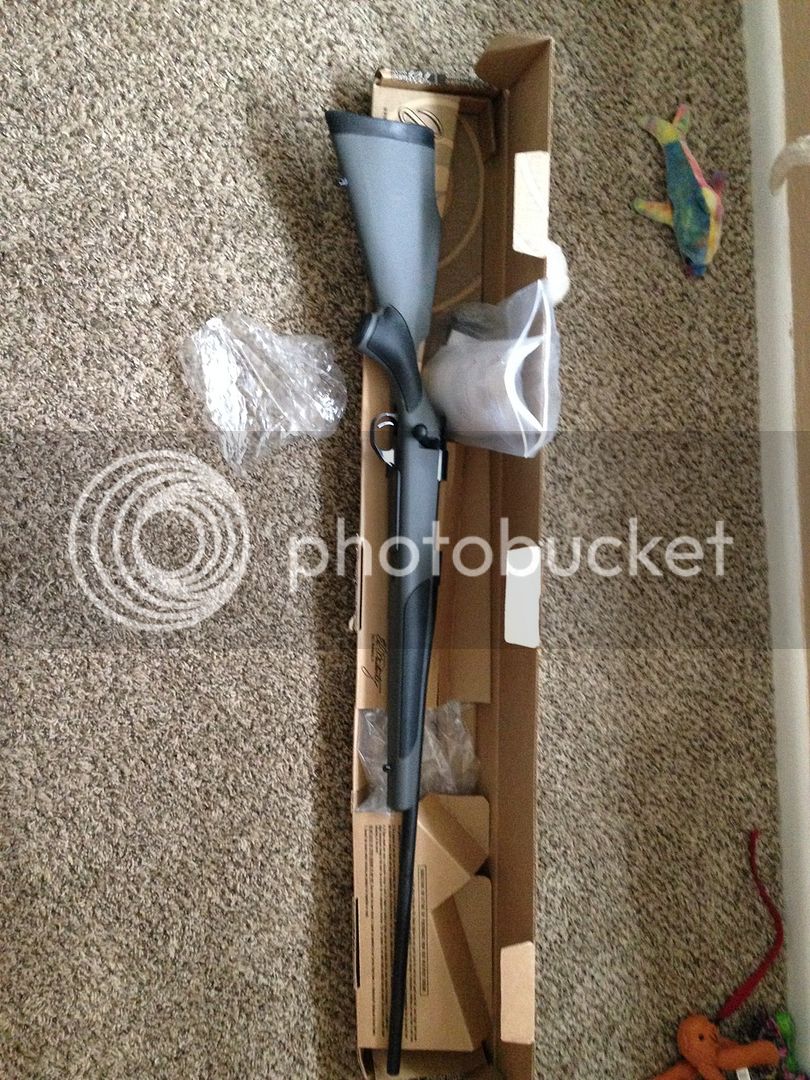