This is a recap of my 2021 Colorado elk season. I went into it with the mindset that I was going to attempt to be in the best shape I’ve been in recent years so I had no excuse to not chase elk into whatever hell hole they were headed to. I’ve never been in horrible shape but since having kids I feel that was the one part of my elk hunting preparations that I always decided to cut out and it screwed me on occasions. This year I opted to work out and hiked with heavy packs for 2 months prior to making the 1700 mile journey to Colorado.

Day 1 had me chasing a bull with 10-12 cows all day and calling him in on several occasions but never getting a shot opportunity. No matter if I was cow calling or bugling or both it seemed his cows would lead first and he would always be just too far in the back for a shot. When he would finally come in on his own there would be too much brush and again, no shot.

Day 2 was essentially a bust. Not any bugling but covered a lot of ground trying to locate one. It was exceptionally hot with daytime temps getting into the 80s.

The morning of day 3 was a 10.5 mile hiking adventure that produced one faint bugle that I couldn’t pinpoint in the wind and 1 lonely cow.
With minimal bugling activity and hot temperatures I was starting to get a little down after such a promising day 1 so I decided to head for a large wallow I had found in hopes a bull might make an appearance right before dark.
I had a 3 mile walk in and a few hundred feet elevation drop to get to where I wanted.
I was within 200 yards of the wallow I heading for when I spotted a water soaked bull coming up through the aspens 80 yards away. I had really good wind with the thermals pulling uphill in the late afternoon. He was oblivious to me being there so I took my time and closed in to 40 yards and prepared for a shot. I noticed at that point that the bull had 6-8 cows with him that were milling around feeding in the aspens.
The bull gave me a perfect 40 yard broadside shot and he immediately wheeled around and began looking for what happened. His cows didn’t hear or notice anything so the bull just stood there. Worried that I made a poor shot I knocked another arrow and proceeded to shoot under him which by this point I’m shook up more than before. I follow up with another quartering away shot that found its mark. The bull went 50 yards and expired. My first shot found its mark as well but I was again reminded how tough these animals are.

I felt truly blessed and lucky to get this bull. I put 17 miles on the day I harvested him and after 2.5 hours of breaking the bull down solo I headed back to camp pretty exhausted but definitely felt all my preparations prior to the season had been worth it. 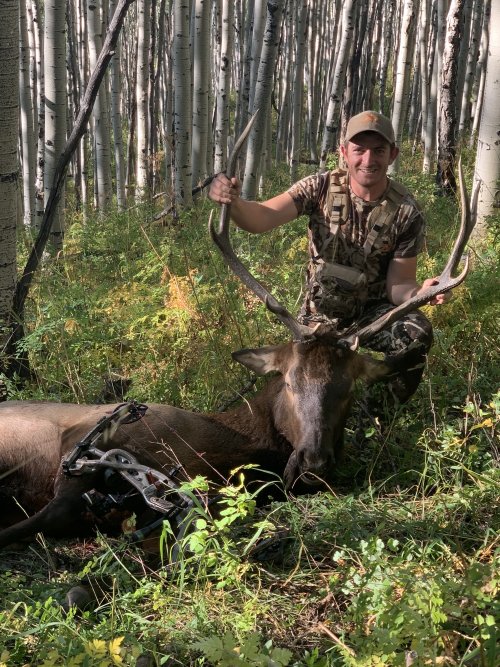 A few takeaways after the hunt and during the pack out that were good lessons for me are that trekking poles are worth their weight as well as a good pack. I have packed elk out before but always used a cheap freighter pack that was miserable and didn’t sit well. I used my mystery ranch to pack everything this year with the help of a friend and felt as good the day after as I did the day before, no fatigue at all, and the trekking poles definitely helped with stability coming up out of the steep canyon.

I have learned an abundance of information from this forum and gotten some great advice from members that I know helped me with having success. Some of the advice and tips you read seem very simple but implementing it and practicing it takes more thought. One thing that I remembered was being told to chase and hunt elk right up until very last light, not to head toward the nearest trail to start planning an exit. That is what headlamps are for. Walk out in the dark and don’t walk away from elk when you could be hunting them. It sounds stupid and simple but I use to find myself heading the wrong way in the evenings, perhaps years of hunting whitetails and having short walks from treestands? I hunted each day this year right up until pitch black and the result was a nice bull I was able to take.

Nicely done! Great bull and great write up. Thanks for sharing.
S

Well done! Great write up and a nice bull. Good for you.

Sounds fun I also enjoyed my first elk hunt this year. Congrats on your success and great right up. Do you plan to make it a yearly hunt?
S

BT_NVhunter said:
Sounds fun I also enjoyed my first elk hunt this year. Congrats on your success and great right up. Do you plan to make it a yearly hunt?
Click to expand...

Thank you. As long as I am able to I hope to go west hunting each year. I have went out on previous years as well and had some success. I may not return to that area in the near future though as I am sitting on points in a few states that I would like to start cashing in.

Heck yeah! Great writeup and congratulations on the solo success. It's sweet to reminisce, but man does all that work suck in the moment. Way to go!

Congrats on keeping after it! Nice bull as well

Congratulations. Thank you for sharing.

Very nice! Thanks for the pic and story! Grats all around.
R

Congrats on the great bull.

2021 Recap. A rollercoaster of experiences and emotion.