Hi guys and gals! New here. Been reading lots of posts on here for a while and finally decided to join. Looking forward to the fun posting ahead!

Anyways I was wondering if anyone had some info on hunting this unit for antelope? Dad and I drew this year and are super excited for our upcoming hunt! Due to many different obstacles we won't be able to make it over there prior to the hunt. So I have taken it upon myself to research as much as possible. If anyone has tips on what part of the unit we should focus on, what to expect as far as animals or terrain or weather, anything you wish you would have known prior, what landowners to stay away from or the friendly ones we could meet..? Really lookin for any information general or specific! Any tid bits is greatly appreciated y'all! Thanks a bunch!

Welcome to the forum. You've got a great tag. I've not hunted it, but have driven by it many times and I always slow down to scan for good bucks. And usually, I find at least one really good one from the highway that requires me to stop and get the spotter out. I can just never accumulate enough points to draw the tag.

Go to this link on the WY G&F page to see what landowners might be in the Walk-In or HMA programs. I think the list will be updated next Monday (13th).

My Dad drew it in 2011 and I did quite a bit of looking around prior to his hunt. The unit is almost all public and there are a couple HMA's/WIA's in the southern part of the unit. There are NOT a lot of antelope south of 287 toward Green Mountain, but there are some and you never know where a big buck will turn up.

As far as quality and quantity, you're going to see a lot of average bucks in that 70-75 range with a few bigger ones. I found a buck the week before the season that was most likely over 80, but my Dad couldn't make it for opening day. I looked for it the first couple days he could hunt, I suspect someone smoked him on the opener as it was in a pretty obvious spot. Dad finally shot one on the 5th day of hunting after looking over several hundred bucks. This buck had 6 and 6/8 bases, was a pinch over 15, but lacked prong length. IIRC, it gross scored 78 and change. 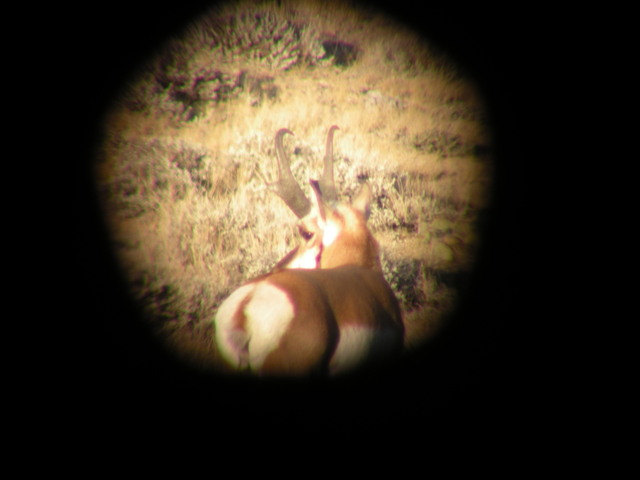 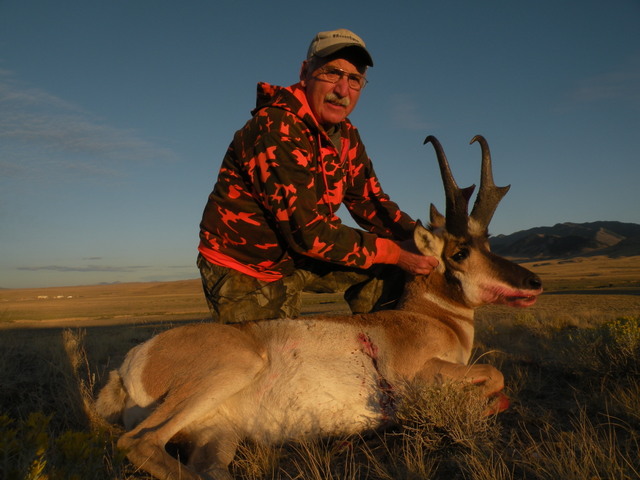 I drew the tag in 2012 and killed this buck. I liked the shape, etc. but looking back I should have shot a couple others that I think would have scored better. 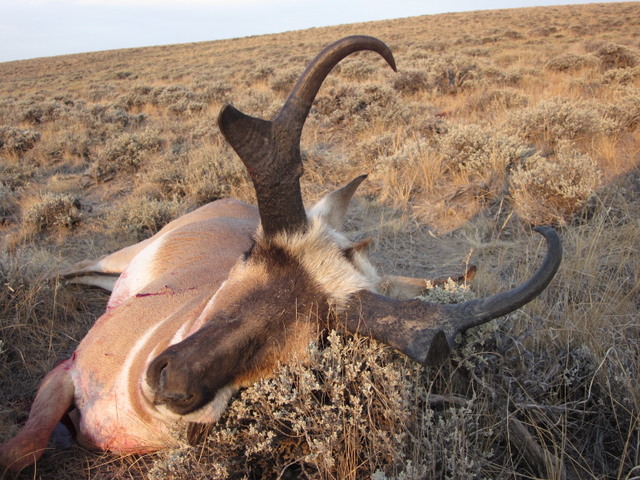 As far as other things to know, your nearest place to get fuel is muddy gap, there isn't anything in Jeffery City. You could stay in Casper to do this hunt pretty easily. If you want to camp, the unit is mostly BLM and you can camp anywhere out there. The roads are pretty good in general, some of the main ones you can drive 45+ mph on them with no problem. If there are HMA's and WIA's open, I would get the permission slips just in case, but I really didn't see anything worthwhile on the couple that I looked at.

The toughest part of this hunt is the number of antelope bucks you'll see and trying to sort through them to identify a really good one.

Its worth it to check out Devils Gate and the Oregon/Pioneer trail sites that are along the highway. Other things to do if you fill your tags early, I would bring some fishing stuff as both Alcova and Pathfinder are good trout/walleye fishing. 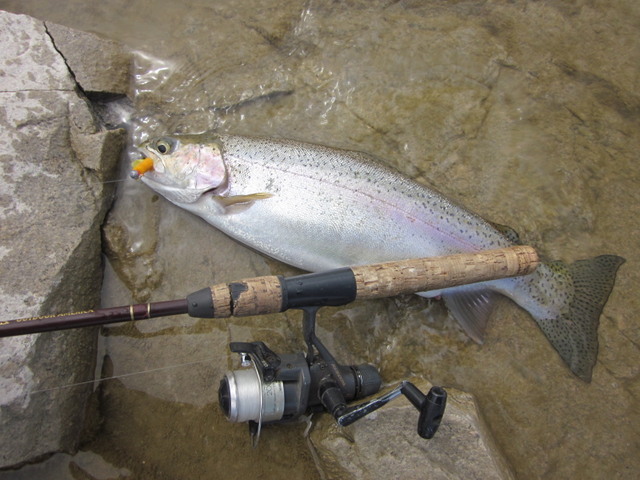 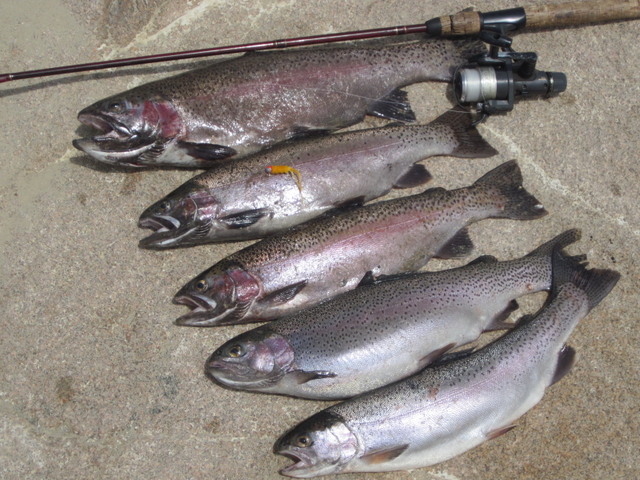 I would echo Buzz's comments about checking out some of the historical sites in the area. Pretty cool. Independence Rock, Split Rock, Mormon trail, South Pass, all pretty neat. Can't imagine being a pioneer toting a hand cart across that country. There area antelope all over, mostly north of 287. They will be pretty spooky if you go later in the season, as they will have been chased around some already. You will have fun.

So how many points does it take to draw a fishing license there?
M

Thanks for the tips y'all! Love the photos and helpful info Buzz!! Thats exacy the kind of info I was hoping to gather! I was looking at aerials of the area today. It looks like a lot of open flats with like creek and river bottoms running throughout the unit. Is it best to focuss on those ridges and drainages or are the antelop more out on the flats? Also do you guys think there's more animals near Casper? Where it looks like all the agriculture is? Thanks again for the tips and info. I really do appreciate it!!! Love the looks of the trout fishing too!!

I'll be hunting right next to you guys in 63. When are you guys going?

My brother and I hunted 63 in 2012. It was our first antelope hunt. We had a great trip. Saw lots of antelope. Our bucks were pretty much average specimens, but we had a great time. We saw several bigger bucks, but honestly weren't being that picky. We fished, antelope hunted, and deer hunted on the same trip.

Buzz is right, the fishing is awesome. We camped on the North Platte River on the miracle mile. There's a store in Alcova that rents and shuttles drift boats if you were interested in floating a section of river while your out there.

Awesome pics! Great lopes and some very nice fish!! You guys have me almost as excited for the fishing! I love big trout! I think we will be going for the opener. Sept 19th I believe. We will have at least a week there so we should have plenty of time for a lope and some adventures! Thanks for the pics and info! Every bit is much appreciated! Foxtrot: How was it hunting antelope and deer at the same time? Were you successful at deer as well? Was it just an OTC tag? I looked into doing that a little bit but figured since this was supposed to be such a good antelope tag I wanted to focus on a big lope!

We didn't deer hunt in the same unit. We ended up picking up some left over deer tags for a general region in the SE portion WY. Ended up spending a week hunting antelope and a week hunting deer. After a long week of not seeing many bucks we ended up shooting a couple of dinkers for the freezer. Great trip though, 17 days, 6 antelope, 2 mule deer, and the best trout fishing either of us have ever had. I caught a 26.5" rainbow. I have been looking forward to doing the trip again since 2012. It was honestly one of the best trips I've ever been on.

Foxtrot1 said:
We didn't deer hunt in the same unit. We ended up picking up some left over deer tags for a general region in the SE portion WY. Ended up spending a week hunting antelope and a week hunting deer. After a long week of not seeing many bucks we ended up shooting a couple of dinkers for the freezer. Great trip though, 17 days, 6 antelope, 2 mule deer, and the best trout fishing either of us have ever had. I caught a 26.5" rainbow. I have been looking forward to doing the trip again since 2012. It was honestly one of the best trips I've ever been on.
Click to expand...

I wasn't able to draw an antelope tag this year but after reading all this about the fishing, I'm hoping to somehow make a trip to Wyoming anyway! You got any pics of the fish Foxtrot? I'd probably drop the rifle and concentrate on the fish from what I'm seeing in this thread.

Awesome information being shared here. My dad and I had the privilege of fishing that area when we hunted antelope there in 2012. We will probably put in for 63 next year if we don't draw any elk tags. We plan on bringing my nephew and brother who have never done a western hunt, if the points to draw don't change too much. Have fun!

Sorry fishing4sanity, no pics of the big guy. I really wasn't expecting the fishing to be so good and wasn't prepared with a camera til after I caught it. Trip kinda spoiled me, I've had a hard time adjusting back to SE trout.

Just drew this tag today and will head there at end of September. Would go earlier to catch the rut but not able to due to work trip and then the ID moose hunt. As soon as finish up moose hunt, will drive from Idaho Falls, ID, over to Muddy Gap, WY. What a name! Yes, this is my third pronghorn hunt for this fall after the NV and OR tags I drew. My favorite critter to hunt so no complaints.
F

I just drew 68 too!!! Really pumped this will be my first antelope hunt. To to start planning.

I drew unit 69 loper,looks like ill be next to ya
M

you guys took my dang tag.Good luck to you anyway.I'll be over in 63 helping my boy fill his tag
J

I drew this tag as well. It should be fun.
You must log in or register to reply here.