Stirring the pot on shot placement

Being just a hair off of your aiming point can/will result in a miss, or worse, a severely wounded animal. It's a small target with an even smaller positive kill spot. The head also moves around a lot. Harder to be precise.

You have much less room for error. If you miss the spine, much of the neck is not immediately lethal. Same for head. I’ve necropsied animals with pretty horrific wounds to head/face and neck that were not immediately lethal, but the animals were certainly dying, weeks later. It takes a very small miss at head or neck to end up with a wounded yet highly mobile animal that you will not recover. Most shooters are much more effective with the larger target size of the thoracic vitals. If you are patient with your shots, you can quickly kill an animal with nearly zero meat loss. And in the scheme of things, I guess I would prefer higher probability of a quick kill with a small amount of meat loss than a higher probability of wounding and not recovering. The risk/reward equation probably works out different for everyone depending on their marksmanship skills.
M

I have not picked up my firearms for more than a few shots a year in about 30 years. I am setting up a range in my yard (5 acres surrounded by forrest) to practice my skills and then I aim to take a long range shooting course. I was an expert shot in the army and my longest shots then were around 500 yards. I understand that animals move, wind gusts and trees, grass and such aren't always visible. That said, your answer is the most complete, and with the others till yours, gives me something to seriously consider. I believe that we, as hunters, are part of God's herd management program. That means that sure shots should be taken at all times, but that sure shot is different for each squeeze of the trigger and certainly each hunter. Thank you all for your responses.

nick87 said:
The shot that saves the most meat is about 2" behind the shoulder 1/3 to 1/2 way up broadside without doubt.
Click to expand...

This. If you want to save the most meat use a bonded or monolithic bullet and don’t hit the shoulder bone. Also, something not mentioned often in this thread is the benefit of an animal bleeding out. On head, neck, or spine shots most often there isn’t sufficient hemorrhage of blood vessels to allow the capillaries in the muscles to drain of blood before the heart stops. This can affect the quality of meat.

Head shots are for squirrels and rabbits with a .22.

As far as ethics goes... the most ethical shot is the one with the greatest margin of error in case something doesn’t go as planned. Different situations may mean different shots are the most ethical at the time. 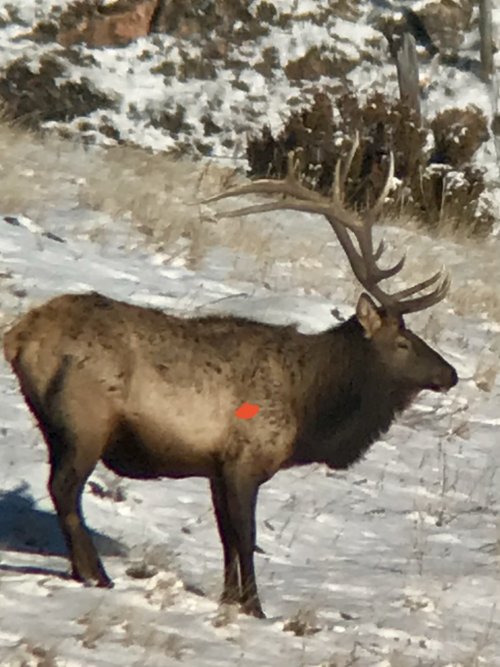 Several things come into play when firing at a living target, most of those things are in play when choosing an animal to harvest, or said plainly, kill. I honestly don't care about the animals hat rack, only the size of it's body. Honestly, when I started considering hunting, that was my only concern. After watching hunting shows, talking to hunters and listening to those who want hunting banned, my prospective has changed. This conversation has definitely added to that thought process. On one episode of "THE HUNTING PUBLIC" I believe it was the first season on Prime episode "BUCK AT 10 YARDS", Jake shot a buck, which struggled to die. Their entire crew struggled with watching that animal die. To be honest, that is a primary factor in asking this question. I do not want the responsibility of injuring an animal, I want it to drop in it's tracks, not taking another step. Not one of us is perfect, none of us makes the exact shot needed every time. I plan to cut up the antlers to feed to my dogs and after harvesting the marrow, the bones will go to them as well. Plans are a starting point, but as any soldier knows, plans change as soon as the first boots hit the ground. Training is paramount, it is the only fallback for botched plans. You have all given me much to think about and that is how plans can survive to fruition, thank you.

Looks like straight up the leg and center of the chest.

Dancerpro said:
Looks like straight up the leg and center bottom third of the chest.
Click to expand...

Anyone that says a neck shot causes less meat loss than that shot right there is full of it.

JLS said:
Anyone that says a neck shot causes less meat loss than that shot right there is full of it.
Click to expand...

Why are they full of it?

Dancerpro said:
Why are they full of it?
Click to expand...

Because it’s absolutely false. Neck roasts are great. I got six of them off a bull two years ago. The shot through the ribs damaged maybe four ounces of scrap.

If I am shooting a big bull or bear it’s a shoulder. Brake him down and anchor him. Cant run with both shoulders broken. If your shooting a large caliber gun 99% of the time it’s kills them on contact. Hence why I am a energy guy not velocity. Both are important but I edge on energy. I have yet to loose hardly any meat with shoulder shots in big tough animals. Use a hard bullet like a solid copper or something that doesn’t come apart.
Yes I do shoot for vitals on deer, antelope and cow elk( usually).

Gr8bawana said:
I watched a tv hunting show where they came across a bull elk standing next to the road. It didn't spook and you could tell something was wrong with it but it still looked healthy.
After the hunter shot it they found someone had shot it dead center of the butt hole. Had they not killed it it would have suffered a slow panful death because somebody took it upon themselves to take that awful shot.
Click to expand...

I’d like to see the footage I’ve never taken the shot but I would have to see the bullet as opposed to an antler being the cause.
D

A neck shot is about 3 inches below the ear. If you can't hit that at 50 yds you need to practice- a lot. Think those body shots through. Sometimes those entry wounds don't end up where you want them. The angles they are standing can be tricky.

If you are looking at the tail the option should be the back of the neck Or let them go and shoot them tomorrow. Sounds like many of you need to practice shooting off hand and using trees for a brace.

There is a lot of meat on the neck especially on say an elk or moose. So unless your shooting then right behind the ear an neck shot at the base of the neck does mess up quite a bit of meat. I rather put it right behind the shoulder and lose a very little bit of rib cage meat
O

D4570 said:
Talking about stirring the Pot. What do you think about a Texas Heart shot then?
Click to expand...

I had a chance at a very good big horn ram in 1994 that was offering me that shot. When he wet to turn he left the area at a hard run. That night it snowed almost 30 inches and I could not access the area again so I hat tag soup. I have second thought that choice ever since.
1

D4570 said:
Talking about stirring the Pot. What do you think about a Texas Heart shot then?
Click to expand...

If I've got enough bullet/gun to do what I want it to do, I don't have a problem with it. Situational dependent of course on unwounded game. On wounded I won't hesitate on that shot.

I have no problem shooting a critter through the shoulders either. I generally hunt with a bullet that I feel will be up to that task. In some situations, that's a preferred shot for me, especially if I want them to not go very far. I'll take the shortest way to the vitals and if a few bones are in the way, it's not been a problem.

I'm prone to overthinking, I love those firearm shots where the animal just drops in place. This is especially cool for me as I like to hunt solo often but I'm red/green color vision deficient. To compound the matter I mostly bow hunt where the animal dies via blood loss vs. shock. Seems irresponsible I know, but there it is. My bow shots are often different than gun shots but it's often difficult to make the switch instinctively after a bow season. I am trying to retrain myself to pick a aiming point that min meat loss (including the heart), while getting the shortest blood trail possible. Seems that the shot behind the shoulder (no bone shot), higher up on the animal hitting both lungs and providing shock to the spine works well.
You must log in or register to reply here.

S
Recovering from a botched shot.
2