I woke up early on Nevada tag results morning and started checking to see what everyone got and couldn't believe how lucky my girlfriend was to get a second bull elk tag in two years.
Refresher on the first story here: https://www.hunttalk.com/threads/my-girlfriends-first-elk-hunt-ever.302509/post-3130686

All of my family and friends that I put in for the draw got tags with most getting several. We got a total of six elk tags this year. 2 spike, 3 cow and 1 bull in various areas. This was certainly going to be a test of my ability to help them all. I had a fleeting thought, should I have her try and top last years elk? Since the tag includes the Jarbidge wilderness we checked around to hire some horses, tent setup, etc. After getting prices that was quickly dismissed and we decided to just hunt outside the wilderness. We only had five days planned to hunt north of Elko. Since I had recently helped my nephew fill his cow tag and I filled my cow tag in this area I knew my way around it pretty good but in five days only saw three bulls with only one being six points or better. Like last year, she kept telling me she just wanted to put meat in the freezer and was going to shoot the first bull/spike we saw. It didn't matter how many times I explained to her the odds of getting this tag and the wait times to get it again. She didn't really care as she is "not a trophy hunter". In my mind it had to be at least a six point bull this first week and maybe I will just have to keep any sightings of smaller animals to myself. Checking the weather the night before showed a storm was rolling in and supposed to be here in the evening and stick around for 3 or 4 days. Now I might need to be flexible on that six point minimum.
Day one and we are on top of the most promising mountain that I had found. Didn't see anything except an antelope in the distance. We decided to head down and check things along a drainage which I thought they had been using in the past. The first few glassing spots provided nothing. I saw a new glassing spot and decided to walk out to it while she drank some coffee and had a snack. As soon as i got to the edge I saw them. The bull had huge fronts and I counted 6 on each side so i called her over to the glass. She didn't hesitate in wanting to kill that bull but I was concerned about shooting something four hours into a bull elk hunt. 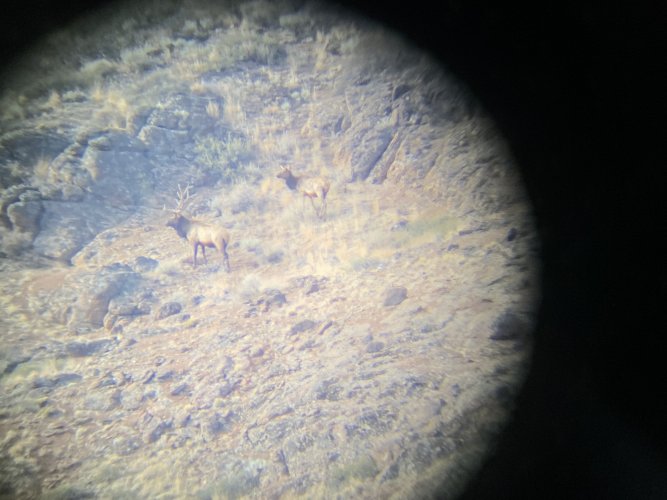 It was probably a mile off but we were in plain sight so we left the jeep and hiked down to get a better view. By the time we got there they had bedded down. One bull, two cows and two calves. We were across the drainage at 503 yards. She had not practiced at that distance so we backed out. The only other place I could see to get a shot was the cliffs above them but from our view I couldn't see if we were going to be clinging on with one hand and shooting with the other kind of thing. Its all we had so we looped way around and headed for it. When we got there we found a small path that got us right above them. We had good wind but the last time I saw the calf it was under a the bush that was now just 20 yards down to our left. The bull was just under 100. When i poked my head up to take a look, he had his feet under him with his spine on top facing away. Not a great shooting angle. I dropped down and I quietly explained that she was going to have to shoot spine far back for the bullet to travel through the vitals. She poked my spine where she thought i explained and I nodded yes. By the time we both peaked back up it had slid over spine far right and I assumed she would adjust to hit the vitals. She was taking a lot of time calming her breathing while we were in full view of them all. (Have a great video) Just before the shot I looked over at the cow ears in the bushes 15 yards to the right of the bull wondering when they were going to see us. Then I glanced just down to our left where there should have been the calf. Crack, goes the shot. The bull acted like a snake just bit its back, jumped up and looked around. The first shot was exactly where we talked about. It just skinned the spine with no damage done. 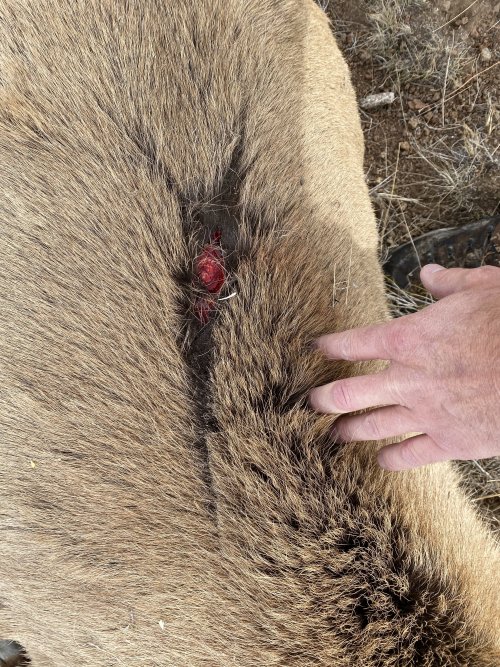 The bull started to run up the hill while sleepy cows and calves were getting on their feet. I told her to hit him again. He slowed for an instant 10 yards up the hill and crack goes the second shot. Hit the spine just at the base of the skull and it was over. What a great place to shoot as that was the least meat damage on any animal I have cut up. I had her slowly walk up and touch the eye to make sure it was dead as it did a few more kicks here and there while we were walking over. 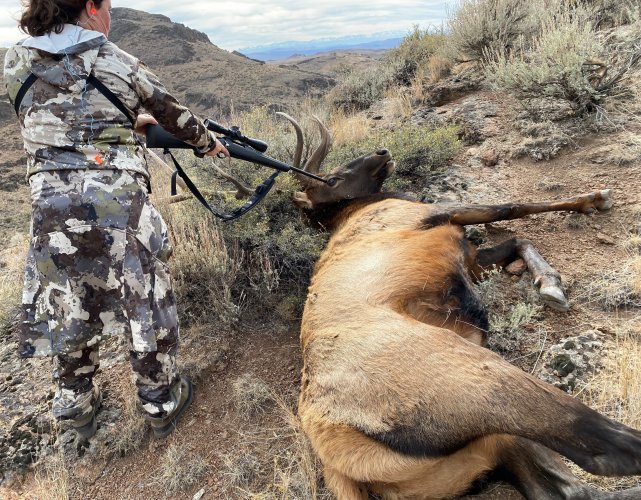 After she touched its eye to confirm it was dead I put my hand on its rump like most hunters do, probably like an act of claiming an animal. The entire body convulsed as if it was throwing its legs under it to get up. Startled us so we stepped back and she dang near shot it again. Never seen a dead animal move that much but you learn something new on every hunt.
A picture of her with the moment starting to sink in. 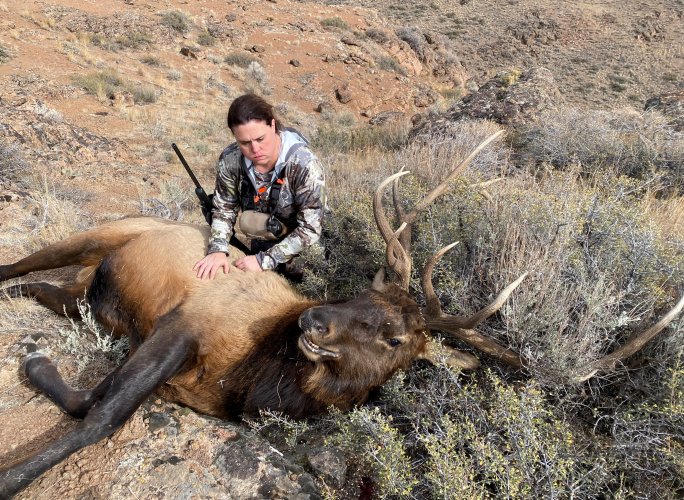 We took some quick photos as we took off without our backpacks. 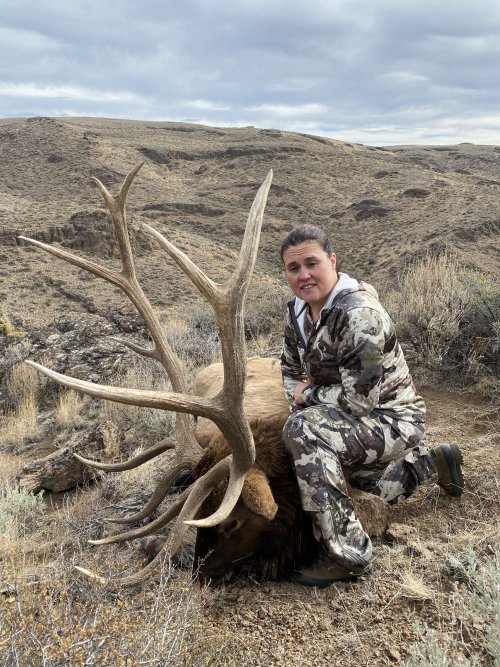 She had to sit with the animal for about an hour as I raced back to the jeep to drive all the way around to the other side of the drainage. The storm was already coming through and she was getting worried about having to do an animal breakdown and pack out like the photos I sent her from my nephews elk.
Two weeks earlier it turned from a bright sunny day to this in about 30 minutes so we needed to hustle just in case. 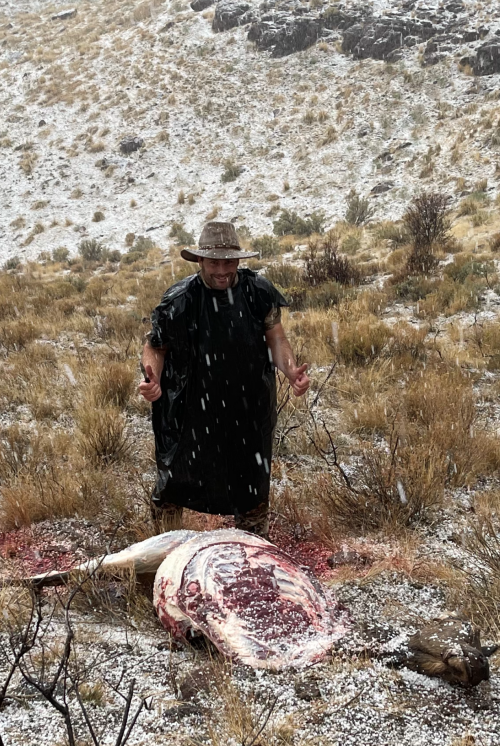 She took off in such a hurry with the first load I hadn't even cut the legs off yet. 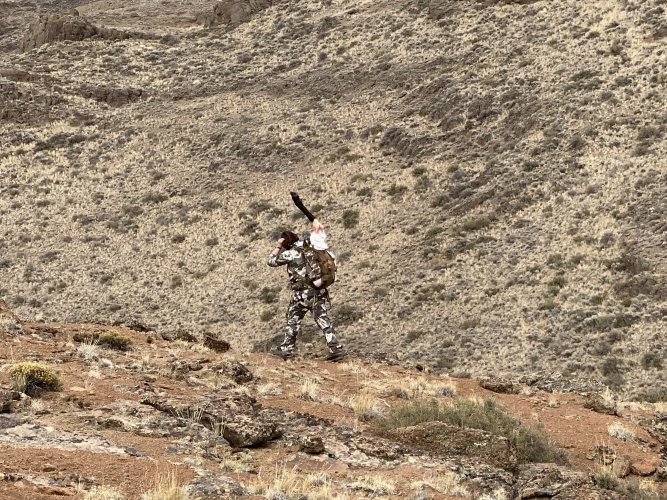 She packed four of the six loads out cause I was busy cutting most of the time. 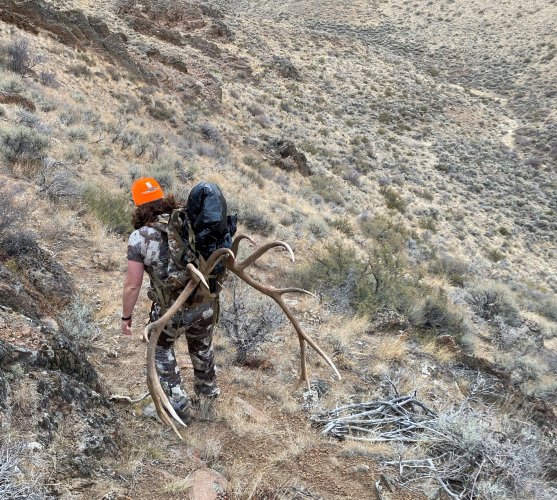 Even though it was a one day hunt we were glad to sleep in a few hours as the pack out can make you sore.
Next morning we woke up to rain in town and snow clouds in the mountains. She was happy for a one day hunt.
Il have to find a way to upload the video of the shot as its pretty good.
I wonder if she is going to be lucky three years in a row.

Awesome. That bull has incredible fronts.

How do you draw two bull tags in two years when there's a mandatory wait period?
C

Awesome couple bulls. She is pretty special when she shoots and then packs her elk out, ya got a keeper.
Probably not a wait period on the predation hunt from last year, would be my guess.
E

Awesome bull. Congrats to y’all. I get wanting to make the hunt last, but sometimes you just don’t need to look a gift horse in the mouth
H

TWO Nevada bull tags in two years? That doesn’t even happen in my dreams.

Those fronts are what caught my attention from so far away. Crazy big hooks on them.
P

NV_ARCH3R said:
How do you draw two bull tags in two years when there's a mandatory wait period?
Click to expand...

There is no waiting period with depredation hunts.

G2 on that left side is insanely long!!! Congrats on a keeper, and on the 2nd elk!
Matt

psycho said:
There is no waiting period with depredation hunts.
Click to expand...

Very cool they waive the wait for those hunts. Nicely done and looks like the pack out was more fun than when I am solo!

Great hunt and nice looking bull! Congrats to you both!
H

Pictures are great - You can see the anguish, exhaustion, emotion, and success through the pictures

Congrats to the lucky lady, that's a great bull.

What a great bull and great luck getting 2 tags in two years congrats
You must log in or register to reply here.