In case anyone, specifically legislators and Congressional delegates, thought RMEF was not serious about their position in opposing the transfer of public lands as is currently being promoted by some fringe elements of western state legislatures, this is hot off the wires. RMEF issued their first statement opposing this idea in September, 2014, but they are doubling down with this official position statement. 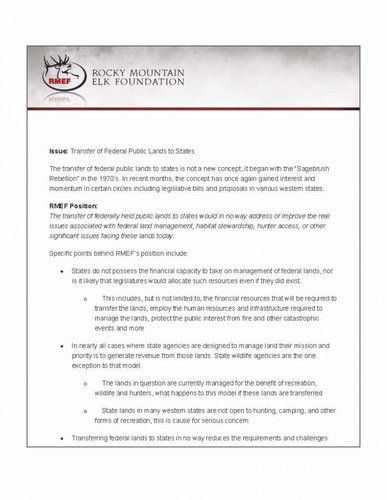 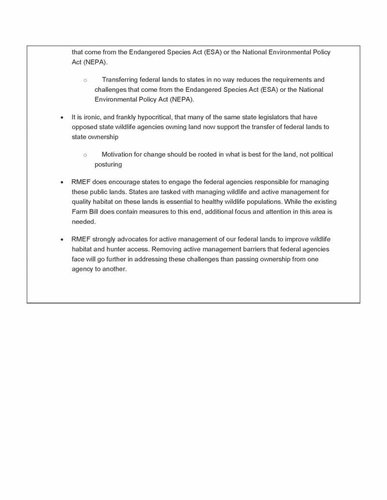 As the rhetoric gets turned up, the more it becomes obvious that the promoters of the schemes have no answers to the hard questions being asked. Rather, "Trust me" seems to be the reply.
B

This is yet another reason I take pride as a contributing member of the RMEF!

Great to see it in print.
H

Another reason they will continue to get my donations

Of all the organizations opposing the land transfer, the Rocky Mountain Elk Foundation's opposition is probably the most important. They have massive membership and clout.

Some bastard handing out American Land Council paperwork at the rally tried to tell me that the RMEF was really a "greenie" organization hell bent on buying up land and locking us out of it. I laughed in his face and told him he was wasting his time.

It is a sign that the land transfer proponent's position is all gurgle and no guts that the only arguments they have left are ad hominems about those in opposition to the transfer. They look pretty stupid when they try and portray the RMEF as a bunch of "greenies" and despite it not seeming possible, look even more foolish spouting conspiracy theories about the Montana Wood Products Association.

I always figured that if you want to know what the west would look like without federal lands, just look east. I've also wondered why so many of my fellow westerners looked down their noses at folks back east, all while hell-bent on doing to the west the exact same thing those easterners did to the east.

Some of the wisdom from back east comes from experience. The feds are far from perfect but they retain a certain distance and objectivity and institutional knowledge which comes from representing the interest of all Americans, not just those closest to the "resource". Kind of like F.B.I. Agents are never sent back to their home town after graduating from the Academy. Whenever I hear someone say that those closest to the resource are best qualified to manage it, I just can't help but think of a group of teenagers cut loose in a mall, unsupervised.

Again, I'm not saying the feds are perfect, or that all locals want to divvy up the spoils (RMEF is composed of many locals), but the track record of States and local government speaks for itself. Just look east.

I think I will upgrade to a life membership
B

How are the states going to generate revenue from those lands? Highest bidder, just what Montana need more Wilkes brothers!
E

It boils down to who you trust more w/ your public lands...the Fed, or the State.
P

I just joined RMEF last week. It looks like money well spent.
B

Thanks Randy! Do you know if there are any written versions of your comments or Dave Allen's comments from the Helena rally? I would like to read them. You all rocked the house.

Eric Albus said:
It boils down to who you trust more w/ your public lands...the Fed, or the State.
Click to expand...

I'll ignore the rest of your post and say that with all the stupid things the Idaho Legislature has done or tried to do the last couple of years I'm going with the Feds.

Plus, as the above pdf states the states' priority is to generate revenue. From the Idaho Department of Lands Website:

Management activities on state endowment trust land are not intended to benefit the general public.
Click to expand...

Eric...congrats.....you have pushed my button enough to get me back on this site, which i almost always refrain from getting into banter.

Your response that lease fees would pay the bills has many angles.

1) Re grazing fees, federal grazing permittees currently pay about $1.50/AUM vs $15-20/AUM on State land. Are your rancher buddies going to willingly pay roughly 10X current FS/BLM rates? Is the State, hungry for cash, going to put more cows on the same land to make up the management cost deficit? How will more cows benefit wildlife and fish? Is the State, hard up to pay the bills, going to spend money to maintain fences or even insure grazing is compatible? Right now out of my truck I can identify most State owned land east of the divide because it is too often a moonscape due to overgrazing. I would much rather bird hunt on BLM lands than State.

2) Has the Hunt Talk hunter considered how leasing might apply to hunting access? How about the State leasing out hunting rights to outfitters? It would be tempting and a revenue maker for sure on cash-strapped State management. It would help make up the deficit by fighting those wildfires which can easily cost +$1,000,000 per day on a single large fire? Camping on much State land in Colorado is prohibited I understand. Right now 29% of the State is federal I believe....most open to hunting and fishing and camping. Why would I or any other hunter want to risk that?

3) Ok lets log it. Yep, the State might make money on lands by clearcutting entire landscapes, failing to put money into slash disposal, regenerating timber and shortcutting road construction/maintenance costs that guarantee bleeding sediment or fail later. Closing roads and keeping them closed costs money....lets save money by leaving them all open. Weed control costs money....lets not spend any $$ on that. Timber harvest isnt necessarily bad and can often be beneficial to many hunted species, but when it has to make a profit, it tends to have negative consequences. Compare Plum Creek lands with federal timber sale areas.

4) Anything the legislature promises...even by legislation....can just as easily be undone. Legislate not to sell State land? Can just as easily pass legislation to sell it once it is realized how much it costs to manage. Ask Texans......they sold nearly all their State lands. Want to hunt in Texas? Just get out your checkbook. Think you are going to be able to buy your own piece of paradise from the State? Guess again....you will be bidding against the Wilks Bros or Koch Brothers. Check out the land ownership now on Durfee Hills or the Bearpaws.

Transferring federal lands.....belonging to the citizens of ALL the States (not just Montanans)....is not just high risk. It is doomed for failure...guaranteed. Lets get this silly idea behind us, and work on issues that help....not doom...sportsmen.

In general I see it very clearly. You have lands that are managed by the Federal Government, which all of the United States pays a stake into managing of these lands. Someone in Detroit is paying a Forest Ranger to watch over a Forest, then you have a person in New York City paying for a Fire Fighter out in Montana.
Now you have this stupid idea that if we give away the Federal Lands to the states that all of that revenue used to guard the Lands can be made up by the states which have a small fraction of Taxpayers and our lands will be managed better? Get real. John
J

Flynarrow said:
Camping on much State land in Colorado is prohibited I understand.
Click to expand...

Correct. Not only that, but there are leased State sections that you can't even hike, hunt or fish on, much less camp. The State has swung some deals for hunters on *some* sections but each section is unique.

As to money, I represented some folks in Idaho before the State Land Board and we specifically outbid all ranchers for grazing rights on an area in order to give us standing to fight another action by a third party. The State Land Board utilized their "discretion" to reject our high bid in favor of the low bid from the rancher(s). The ranchers then sold out to the third party (ironically the feds) who then went forward with their action. Some good country got worse and that is one of the many reasons I threw up my hands, quit the law and moved back to Colorado.

There can be beneficial federal exchanges where someone like J.R. Simplot trades a really nice isolated piece of land for something backed up to an area that is or will be trashed by development anyway, like next to town. I don't remember the analysis but it's not straight across acre for acre. There is a market value factor. Of course some folks in town don't like to see extremely valuable land next to town (open space) traded for what they might deem worthless land in the middle of nowhere. But others, like me, don't have much use for anything near town and would sure hate to see an isolated plot of land in the middle of de facto wilderness (small w) get developed.

A GIANT THANK YOU TO RMEF for stepping up on this critical issue!!!
You must log in or register to reply here.