Glad you had a fun hunt, sorry it didn't end the way you'd hoped. But if it delivers a stud pronghorn later, it was worth it.
5

Sorry to hear about the bad luck. I hunted there in 2010. We hunted 10 days and only found 2 good bucks that year and my nephew missed both. i'm planning on trying again next year. I hope I can draw deer & antelope and spend 2 weeks hunting

IMHO 34 isn't what it used to be and looking to take a buck over 150" will be tough, just as you found out. The deer do seem to be coming back in numbers in that unit, as well as a couple other units near there where we hunt every year. As I mentioned earlier on the Pronghorn Forum before heading out there in late August, I felt those hunting your deer area for pronghorn would be able to take an 80" buck if they had the time to look over a bunch of animals. It appears you concur with that from what you saw during your deer hunt. We got my Sheridan buddy the best of 5 or 6 bucks that we had scouted out before the season and he'll break 80". Another friend from MN that I helped took one of the other bucks he liked because of the nice width and it being his first pronghorn hunt. They were in a unit adjacent to where you hunted and both were within a mile or so of where my buddy from Sheridan took his 84 4/8" B&C buck last year. I'd post their pictures, but right now I'm having trouble trying to resize them to fit this website requirement after I switched to Windows 10 recently.
Last edited: Oct 30, 2015
B

Thanks for the report. Sounds like considering the amount of time you had (or didn't have), it went well.

I disagree that these types of units are not what they used to be. I think in the past, people weren't as worried about score and you don't really ever hear about the average animals that are killed in most of these type of units.

Like Region G in Wyoming, all you see are the handful of really good bucks that come from there. I work in Region G in the fall and out of all the dead deer I saw this year in that country, there was one that was truly a nice buck. I think tapes get stretched and rumors run rampant in most all the units. What I did see is a lot of small bucks, medium sized bucks with potential, etc. in most all the camps. If you averaged the score of all the bucks coming from G, I seriously doubt the average would be even 140. Doesn't meant that there isn't some great bucks that come from there or that the potential exists for a giant. Officially scored, truly big animals, of any species are very rare.

The biggest factor to any tag is the amount of time you have to scout and hunt. The more time you spend the nicer the animals you'll likely find.

Probably one of the best NT mule deer I've seen alive in Wyoming was in unit 34...and not where most people hunt. It was on the edge of the unit. I drew the tag a couple years later and spent some, although not enough, time looking around there. Saw very few deer in that part of the unit and really only had a few days to hunt due to other tags and work. I also wasted 2 days with the flu, driving around and glassing when I should have been hiking around glassing.

Of course weather can also play a big part as well. Then theres the bottom line, that SEEING a big animals, and getting them killed are two entirely different things. When I consider all the things that work against a person, and all the things that have to go right, it amazes me that we as hunters kill anything at all sometimes. Put that perspective on the handful of truly great animals in any unit...its really amazing.

I shot this deer the last 10 minutes of the season in unit 34 the year I had the tag, the smallest bodied mule deer I've ever killed. I believe this buck was 5 years old, judging by the tooth wear, he was just a shrimp...the wee-man of mule deer. 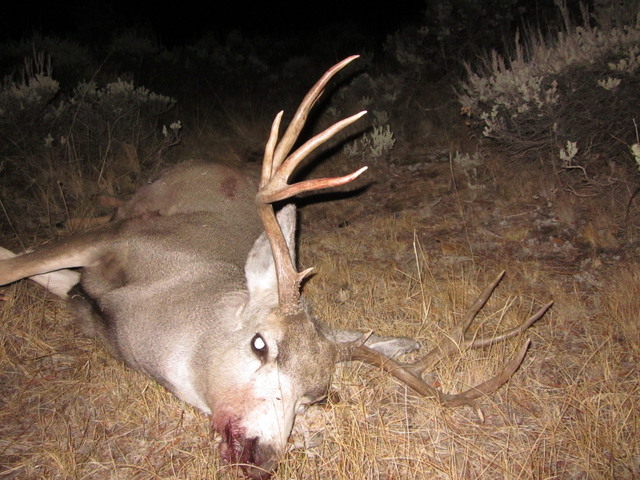 I think you did fine with the tag, its just a function of conditions, time, and of course luck.
M

Buzz,you shot my buck.No wonder I couldn't find him.That's a beauty!!I tried hard on very limited time.I spent too much time in Alaska.I left 2 nice bucks for next year's hunters.I just don't think I would have been happy killing a decent deer on day one.I got a full hunt out of my tag anyway and know the unit now.I would have liked 2 more days and some snow.As you said,finding a great deer in any unit is tough.I certainly agree now.I think if you had 7 days hunting,you could find a good deer in there.If I have my son draw it,I plan on at least 6 days.He can definitely draw the antelope tag next year.I'm going to try for an elk tag there 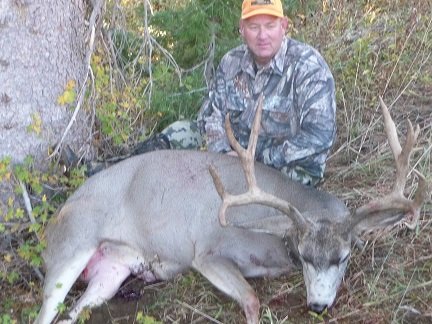 Geez, our bucks from G were well over your 140" average and the antelope buck John shot in our unit a week later again broke 80", just like I mentioned that we would be able to take after scouting earlier before the season opened and seeing a number of good ones. I even got a friend from the internet a good one in our unit the second day of his hunt and it won't break 80", but was a nice wide one that he's going to have mounted.

I would have shot any of those bucks but I couldn't find any.The bucks I found in the unitweren't even close to those except the one,but that was at night in the lodges driveway.If I would have had another day, I would have looked for that one in daylight but my hunt was over when I saw him.I'm sure theres deer that big in the unit I hunted but a lot of the big ones I think were still up in the trees as no weather had pushed them down
The bucks your friends shot was what I was looking for as a minimum.Thats why I ended up eating my tag.Next year, a few of the bucks I left, will make someone real happy with another year of age on them.I didn't need to just kill a deer.I had my mind set on what I was looking to find.I know G is a great tag and I had the points for it.Season dates in G didn't work for me considering I was in Alaska most of Sept.I did think the unit I chose was decent.I just needed more time and better weather

mixedbag---That's me and my Region G buck in the top photo. The antelope buck on the bottom left is the one that will break 80". You may be right that you could have found a good buck with a lot more time out in the field in 34. The more days you can scout and hunt like BuzzH satted the better your chances of taking a good animal and it still takes luck too. However, I seriously doubt that you would have as good of an opportunity in 34 as down in most areas of Region G to take a buck like my buddy and I did with the knowledge I have of 34 and now having hunted down in G. The reason I say that is because you really needs horses to hunt Region G, but you don't in 34. IMHO Region G is as wild as most wilderness areas you would need to hunt with a guide, while 34 is pretty accessible for anyone to do a DIY hunt. BuzzH can disagree if he cares to, which is getting routine now, but that's my assessment having been in 34 and hunting near it every year.
M

I agree with that as far as how accessible the deer are.Do you really need horses in G?I looked into G years ago when it only took a couple points to draw.Maybe that's where I should spend my boys points

mixedbag said:
I agree with that as far as how accessible the deer are.Do you really need horses in G?I looked into G years ago when it only took a couple points to draw.Maybe that's where I should spend my boys points
Click to expand...

IMHO to hunt G properly it takes horses. We rode in on the horses 6-10 miles from the trail heads every day to get where we hunted before daylight. The only way I could see doing a DIY is if a guy is young and a stud to do a backpack into a chosen area and set up a decent camp to hunt out of. Young guys are doing that I guess, but at my age even though I'm in excellent shape at 68, that was out of the question. A person that knows horses could rent one from the place in the Star Valley that advertises on the MM website, but you do lose time AM and PM taking care of them. I had talked with the guy about doing that and that was our backup plan to stay for a weeks DIY if we had not filled both our tags on the guided hunt. I rented horses a couple times in the late 90s to hunt in the BIgHorns and found that it just took too much valuable time and that's why it was nice to let a guide do all that this time. Getting up at 3AM or a little later every morning like we did in G was taxing enough and that was with the horses being all saddled and in the trailer ready to head to the chosen hunt area each morning.

No live ones but did see some nice bulls in the back of trucks coming out of the mountains.Owner of lodge had cow tags but couldn't find any,and I met a father/son from Wisconsin couldn't find cows either
You must log in or register to reply here.