I decided last night after work that I would hike all the way to the top of the large butte that the town I live in is named after. Last time I went up there I only made it to the rock belt that encircles the butte. This time I wanted to make it all the way to the top. So I whistled for my pup "Bear" and we headed out.

You think he likes going on hikes? 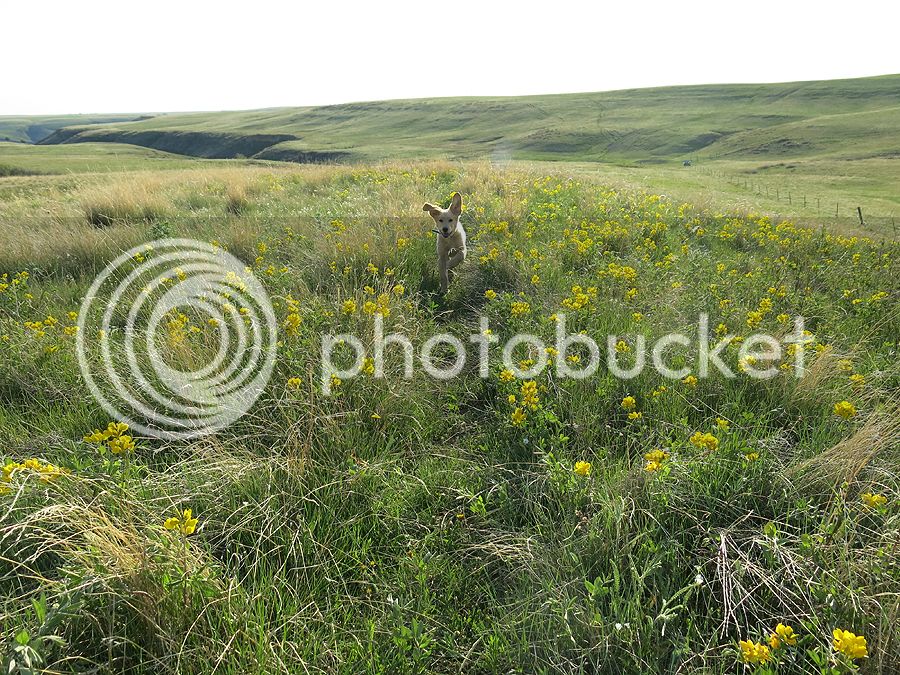 Here is what the butte looks like from near the base. I thought it was cool the moon was out. From my house to the top of the butte is just under 3 miles. So it's just under a 6 mile round trip hike. It's also a 1146 foot elevation gain. So it's a half way decent calorie burner. 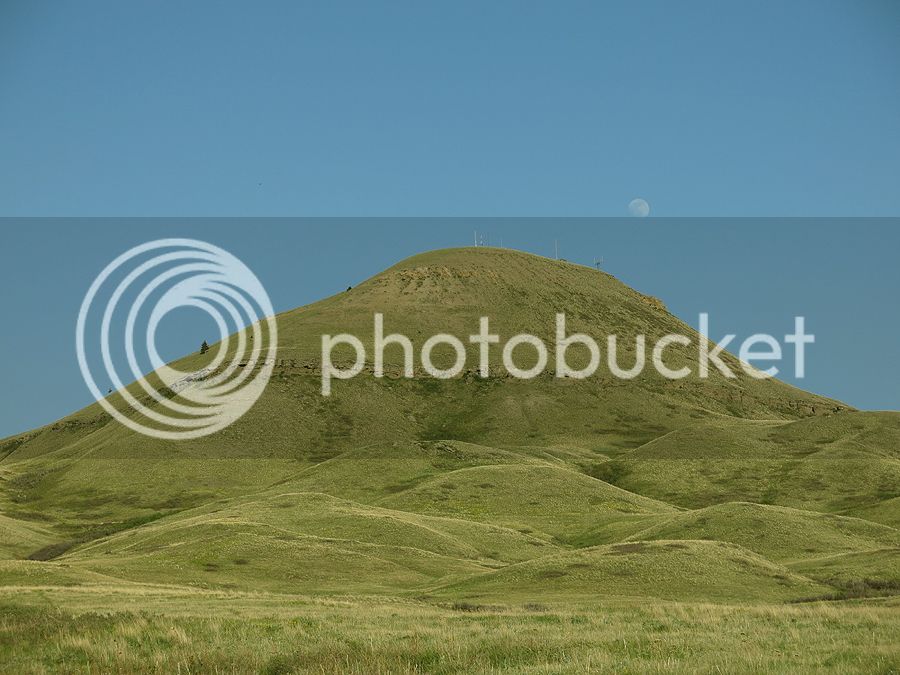 Once we were near the top the wind really picked up. Here's Bear trying to keep himself from getting blown off the rock he's standing on. 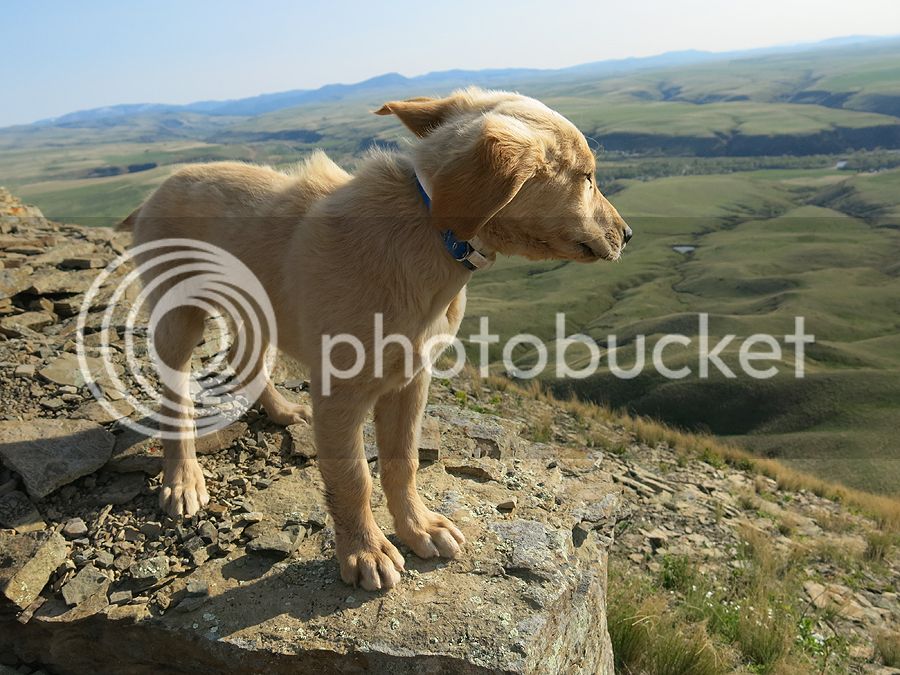 Once on top the views were something else. I could see three different mountain ranges. Here is a view of the Little Belt Mountains. The very triangle shaped mountain on the far left is called Wolf Butte and is over 40 miles away. The butte I'm standing on and Wolf Butte is where the Native American's would send up smoke signals to each other in order to regroup if their party was separated in some way. 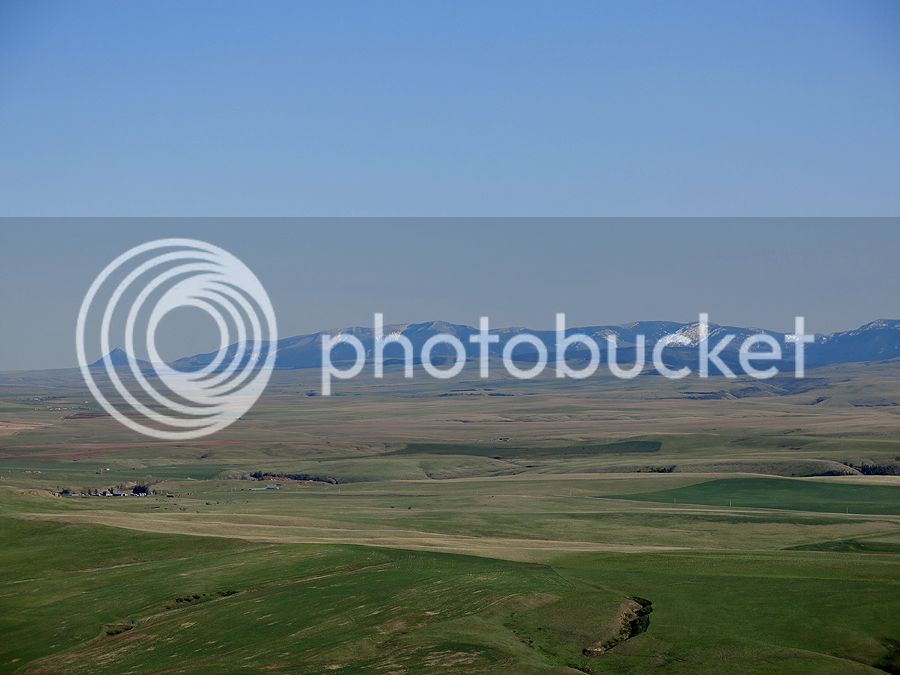 Then as I turn around I see this mountain range called the Highwood Mountains. I have spent a ton of time coyote hunting all over this country. 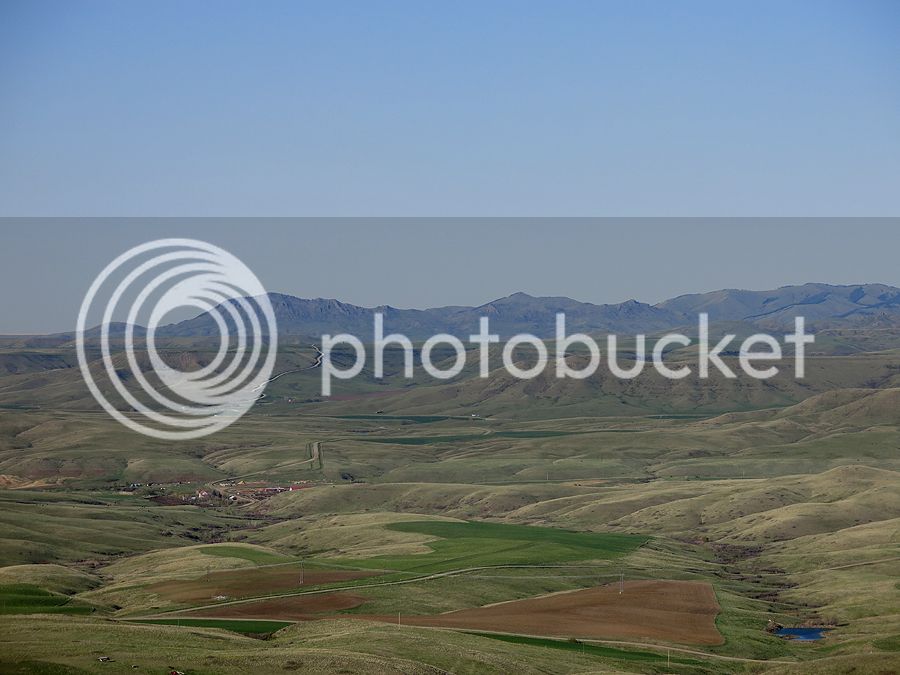 Here's another area I hunt quite a bit. I thought maybe some of you would enjoy a view of the kind of country I lay a lot of boot tracks in. Drag a lot of coyotes out of this stuff as well. 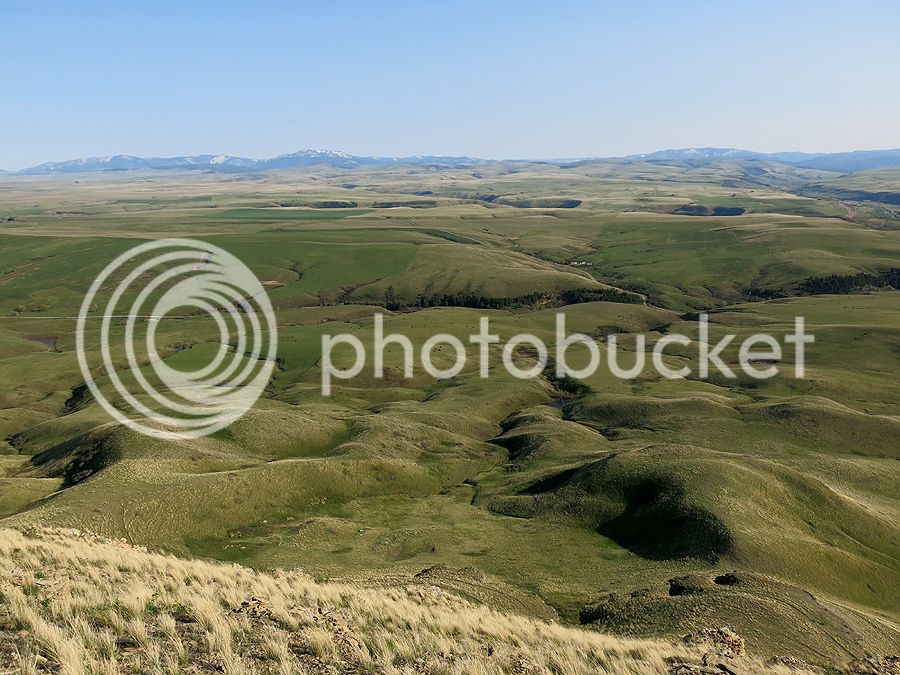 Here, Bear and I are starting out descent back down. 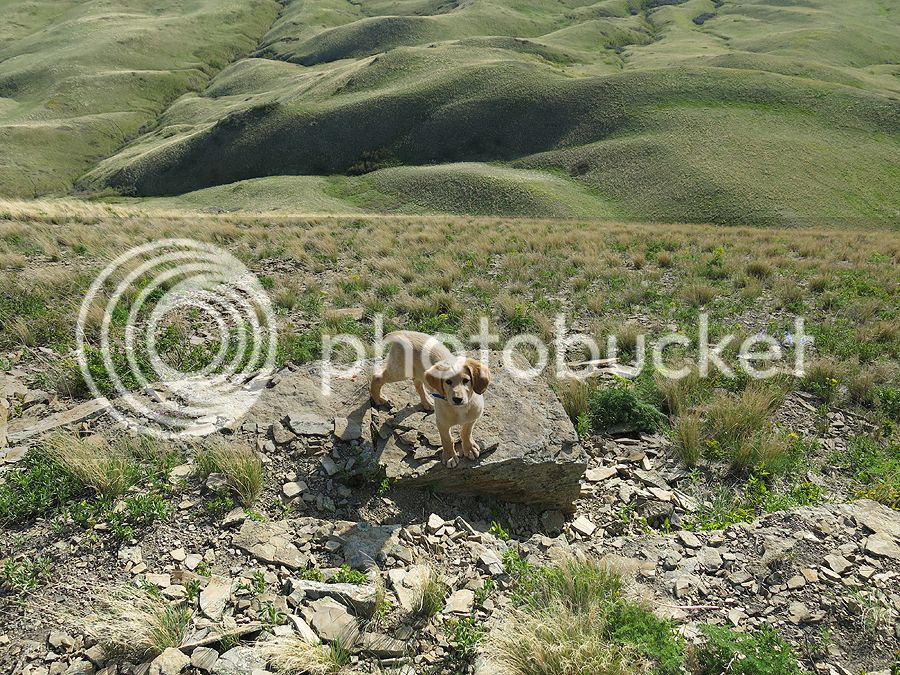 As I took this final photo from our hike, I looked around me and decided...Living here really doesn't suck. The scenery is easy on the eyes, the people are great, and the hunting/fishing is beyond most outdoorsman's dreams. I've been here over 20 years and it just never gets old. 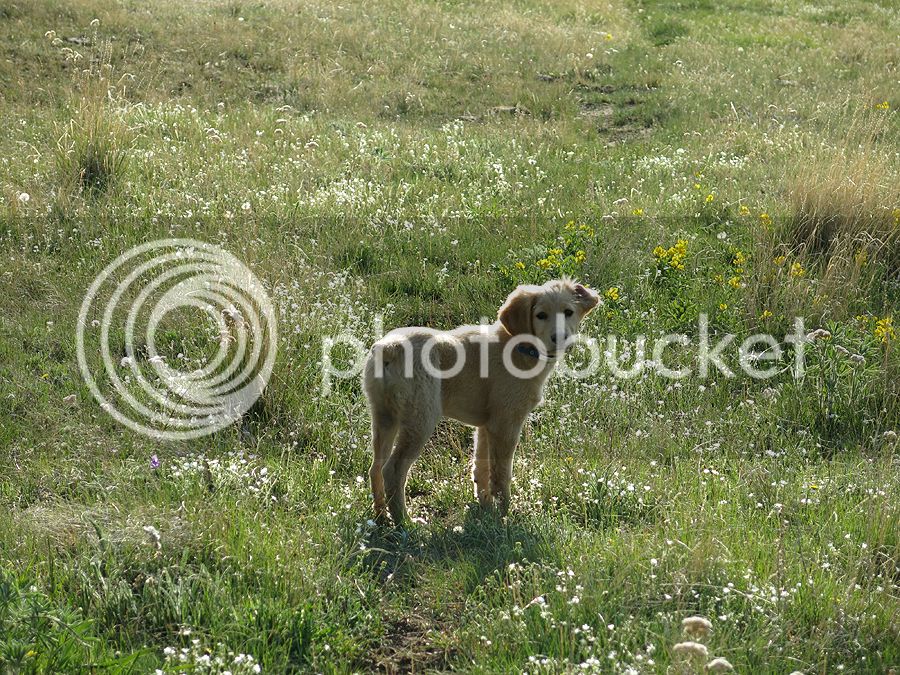 Great looking pup and great pictures. It's a blessing to be able to get out and enjoy these places!
1

Great pics and thanks for sharing. Sure beats the 'hole I live in and get to see everyday.

You working in the recruiting business now?

Nice photos. I can see a ridge in one where I shot a pretty decent bull elk.

You're making me tear up. I grew up in Great Falls and spent much of my youth in that country. Maybe I can get back permanently when I retire, only 10 more years to go (sigh).

Man, great pictures! Things are sure green up there right now!
B

JLS, I got to get a few more people to move to Belt and bring their kids. As a school teacher, I call that job security.

Man, there is a window of about three weeks or so in Central Montana where it greens up and is as beautiful as any place I've ever seen.

Thanks for sharing BigSky.

As I said before, I love that country and am hoping to be up in a couple weekends.

Looks like a beautiful night to be out for a hike.
B

I guess I should mention the night before we went fishing after work. The dog was a nuisance as I expected he would be, but I still managed to catch a couple of fish before a pretty darn nice one broke me off. Plus it started to rain heavily so we called it quits.

Caught one brown a couple inches bigger and a pound or so heavier than this but it was raining too hard to be fooling around with a camera. 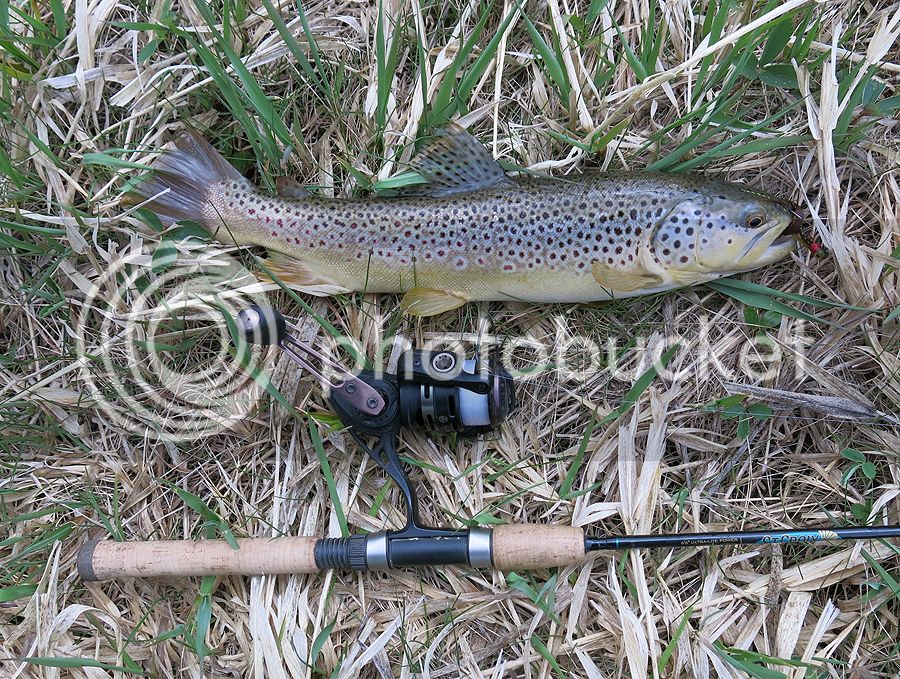 This was a decent rainbow, but the one I broke off later as I was landing it was about 2 lbs heavier and I'd guess right at 20". However, this guy here gave a good fight and was fun to catch. So I'm not complaining. Like I mentioned earlier, living here never gets old. 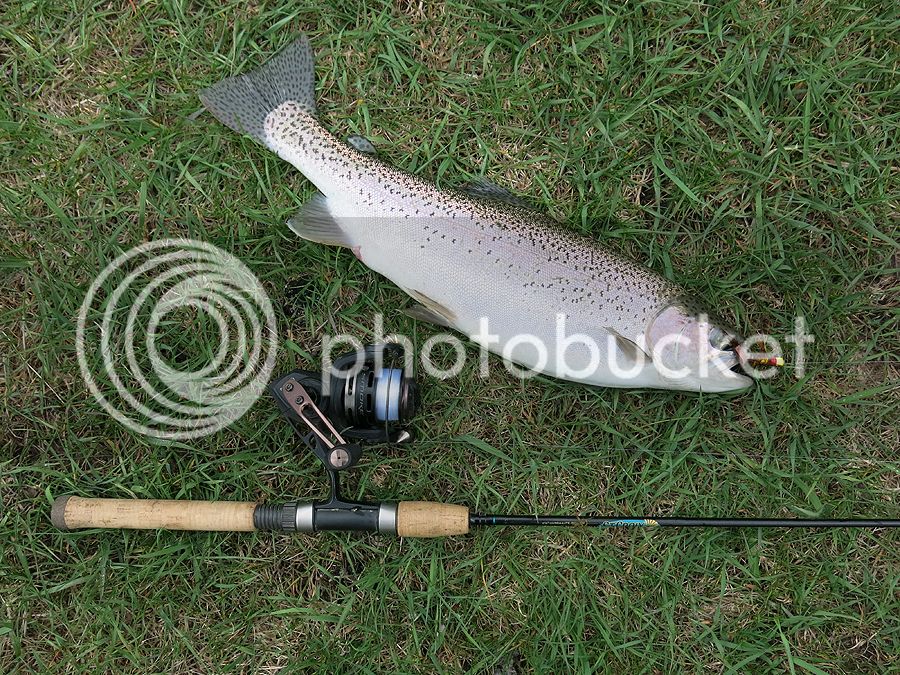 That's some great looking country, your puppy seems to really enjoy it too.
W

Pretty rattlesnaky up on that butte isn't it?

Thanks for the pics !
B

Very rattlesnake, but have been fortunate to not see one yet. My butte climbing days will come to an abrupt end soon once those stupid buzz worms start showing up in force. I expect it any day now.

This is great stuff. I already miss Montana and I have only bee gone since Tuesday for a short vacation to yuppie town Oregon to see my in-laws. The people, pace of life, and scenery can't be beat. Do you offer fishing lessons, cause all I catch are rocks?
W

Saw a bullsnake sunning itself a couple days ago (by Lewistown). I would expect the rattlers out anytime.

Beautiful pics and wonderful looking country!!! Tasty looking trout. Did you keep them or c&r?

Big sky, the area looks a lot around Stanford / Square Butte?
You must log in or register to reply here.

Homily For The Trail-less
2