Tag #1 I actually drew with my third choice but there were leftovers available. Just had to make sure I was antelope hunting. After figuring out I drew the tag I went online and was too late to pick up another for the same unit. I did get one for a neighboring unit though hoping to take two bucks during my 5 day trip.

The trip started out after a graveyard set at work. Didn't get to the area until a little after 11:00 on opening day. Made a couple stalks and actually missed a buck on my second stalk. No time to range as everything busted me.

After not seeing any bucks on public land for a few hours I arrived at my self proclaimed "honey hole". I had hunted this unit a couple years ago and this section of PL was filled with antelope. This year wasn't the case. After glassing from the county road for a couple hours I spotted 0 bucks. I finally took a two track and was able to find one feeding in the back if a Rocky canyon. Perfect except for the 20 does between me and him. As luck would have it one small group of does got nervous about me being there and moved off. That caused 10 more to follow them. I get out of the truck and started working towards the 5 does that were still there. When they picked their heads up I stopped. Took two more steps toward them and they ran towards the other does.

Somehow I successfully cleared every doe out of my way without spooking the buck. I started my stalk and when I was within 100 yards I found myself on top of a giant flat rock. Perfect for quiet stalking as I knew the buck was below me in the canyon. I neared the edge of the canyon wall and spotted the buck below me in front of a boulder. I ranged the boulder at 45 yards and drew my bow. Right after I got drawn the buck busted me. There were 2 seconds of slight panic as I knew he wasn't going to hang around long. I got my 40 yard pin anchored and let er fly. I heard the arrow hit but he took off like a bat out of hell. After a 125 yard sprint he died mid stride and front flipped into the sagebrush. He ended up being an awesome goat and has since ben dubbed "Harry Potter" 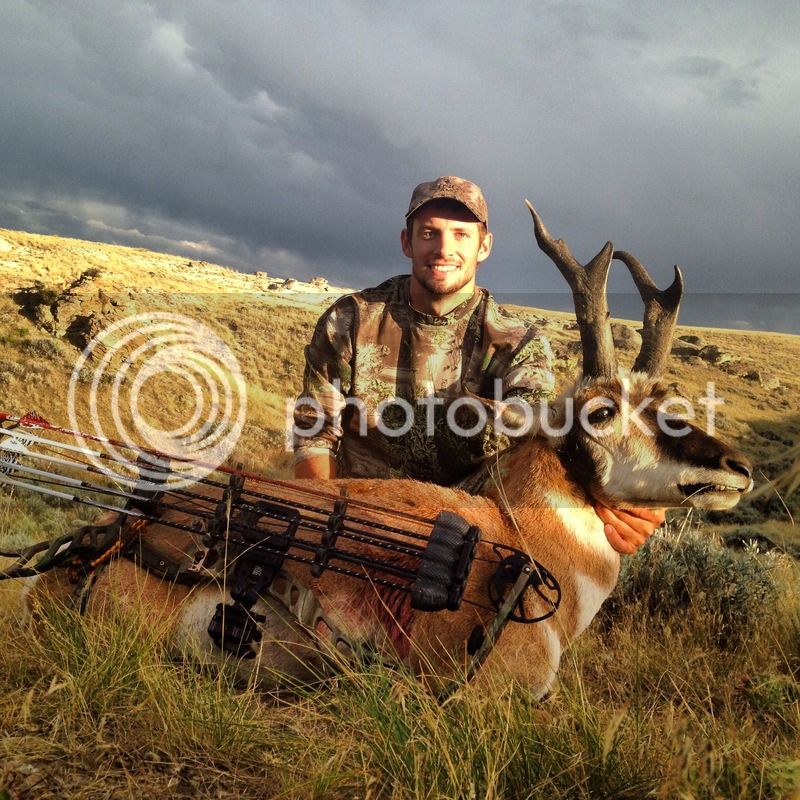 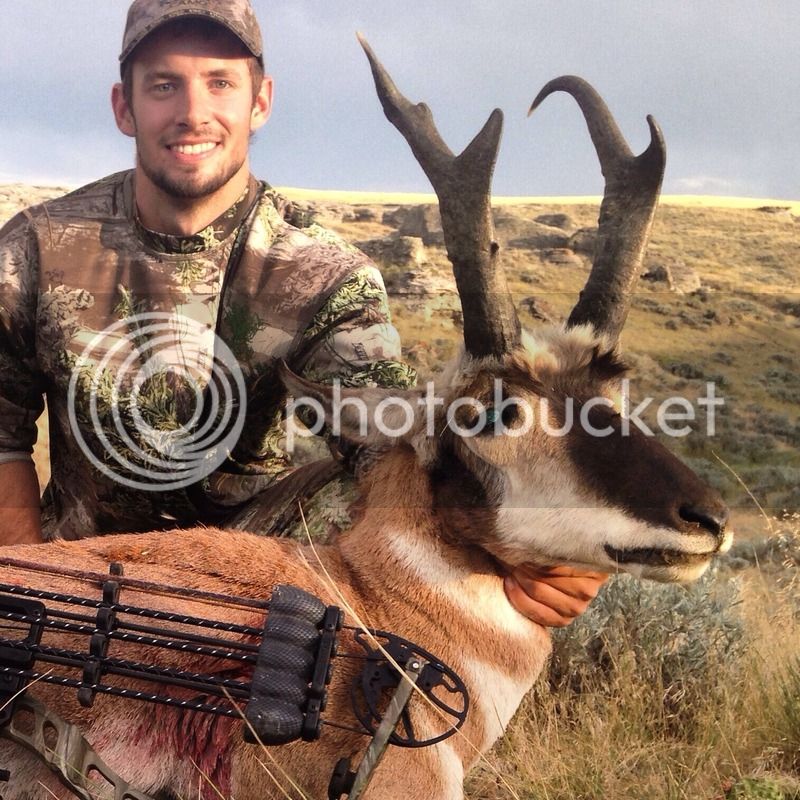 Got a little bit of sleep that night and headed for area number two the next day about mid morning. I could tell right away that this unit wasn't as good. The first public land spot produced 2 bucks 300 yards into private land...and then 4 more bucks about 500 yards onto private. There we're does on public so I kept watch for a couple hours. Nothing budged. Headed out of the main "squares" of public land I spotted a buck with does on a small parcel of BLM. 100 yards into my stalk a doe picked me off and that was it.

I found 2 small bucks on the next public land section but decided to pass. After not seeing any bucks on public land for the 4 hours I decided I better try for the next buck I see. Well that next buck was a good one. The problem was he had 20-30 does and he was trying to keep them in check. They'd all sit still for 10 minutes, and then he'd send the whole herd into a sprint as he'd try and round up a doe that had got too far out of the circle. This lasted for an hour before I deemed him "unkillable".

A half mile down the road I spotted 4 small bucks feeding right below a small bluff. PERFECT! I took off on my stalk and as I neared I was trying to figure out if I wanted to go around the backside of the bluff or around the front of it. Well one of them made that decision for me as he fed over the top. At 21 yards the frontal shot was a no brainer. In fact the arrow even exited in front of the rear left leg and BROKE that leg. He made it 60 yards before piling up in a ravine. 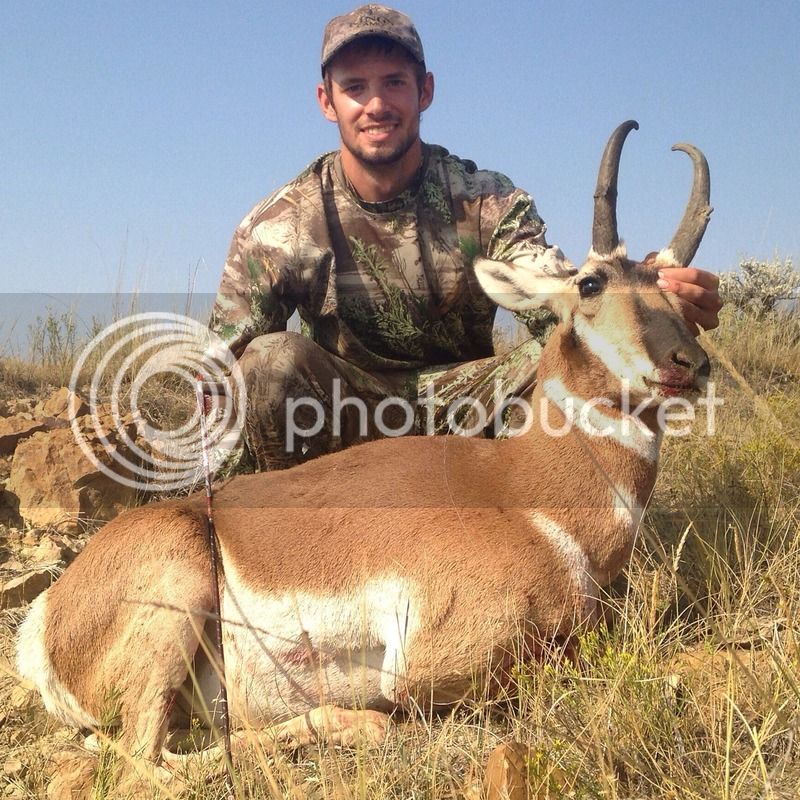 Two units with hundreds of leftover tags...2 days with archery tackle. Spot and stalk. I feel very confident heading into the rest of this season! Hope you guys enjoyed the pics and stories!
Last edited: Aug 18, 2015

Heckuva an awesome trip and story. Thanks for sharing. That first buck is really cool looking!
I

If that story doesn't motivate you to "just pick up a tag and hunt" nothing will! Congrats and thanks for sharing!

Nice job! That first buck is really cool/ugly. I know some guys around here really like those "ugly" bucks!

Great job TW! Hope this is just a prelude to your entire season.
1

Way to get it done! Love hunting pronghorn. One of these years I'm going to have to give it a try with archery.

Way to get it done!!

Nice! It always feels good to get a couple antelope in the freezer. Tough to beat on the table, IMO.

Great story thanks for sharing. I'd rather be hunting in a not so good area than not hunting at all, I only get to be a helper and packer this year.
Congrats to you!
R

Thanks for sharing! That's a great hunt. I'm hoping I'll be half as successful as you were!

Thanks for the kind words guys! I appreciate it. I Hope to hunt antelope every year! If that means leftover tags and a long drive so be it!

Great story and pictures. Thanks

I also have a tag for a leftover unit. Unfortunately there is no way I can get there during archery season so I'll have to wait until the end of the rifle season to try for my first goat.

Thanks for posting the story. It's my favorite part about this site.
D

That first buck is fugly...in the best way. Congrats!

Very nice! There is nothing that is more pure fun in bowhunting than spot and stalk antelope.
H

Congrats on getting two bucks in two days spot and stalk! That CANT be easy. But it looks like a lot of fun.
You must log in or register to reply here.