Its become an annual pilgrimage for me to go to New Caledonia to hunt their rusa deer. Its an exotic place for an Aussie. They drive on the 'wrong' side of the road, speak French, eat different foods, live in a tropical climate, and pretty much live a relaxed islander type of life, similar to the other islands in the regions. Its a short direct flight less then 5 hours from my city yet when we land it feels like we have embarked into a country on the other side of the world.
This year we allocated 12 days for the hunt, we wanted to fish as well and as always, it seemed a long time at the start of the trip but the days flew by once we were over there.
I asked our friends if it was ok for us to drive whilst we over, and it was great fun with my mate and i in one truck and our buddies in the other. There is no highway there, just a dual lane road heading north from the airport and it causes a lot of accidents so we had to be careful. As always after 5 minutes behind the wheel, the aussie larrikan came out in us and we were driving like we grew up in the country. Thankfully we didn't put in any new dints to our mates vehicle.
First property we hunted was only a few hundred acres but boarded massive public land and whilst there was plenty of deer there it soon became apparent it was tough going on the older stags. The locals love their meat and appear to target larger framed (older) stags in velvet for the freezer and this certainly puts a few potential animals in the coolroom each year. Still we scratched a few decent deer up and had a blast.
I love hearing the different sounds and seeing the different wildlife and taking everything in on the hunts over there. 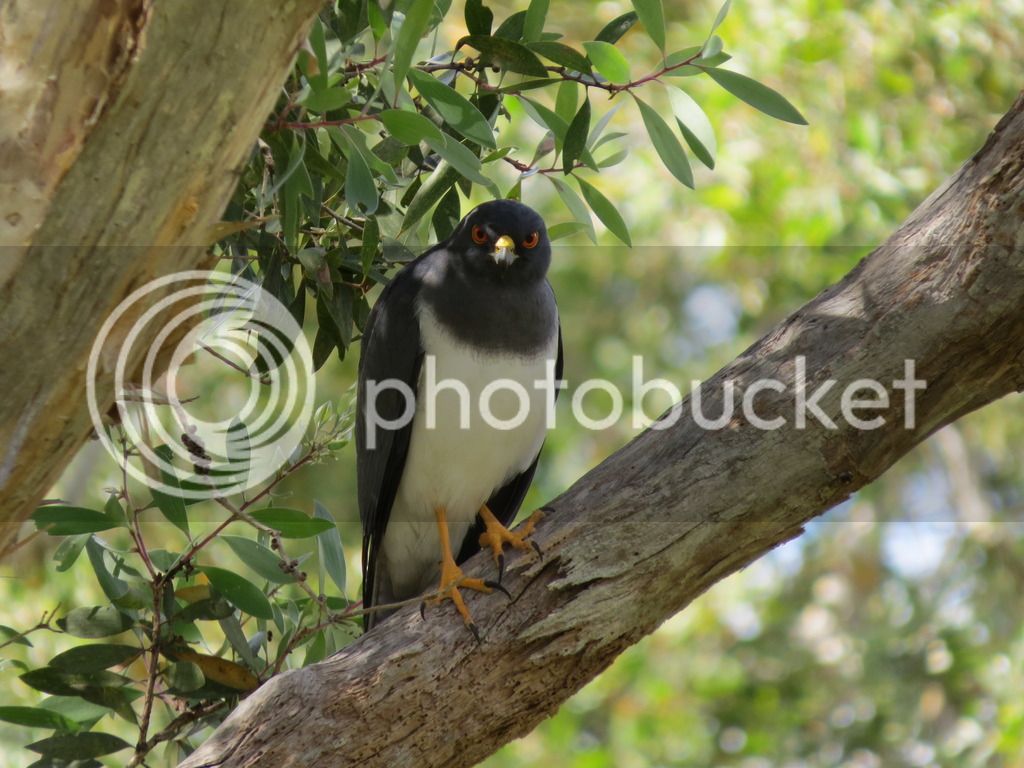 First morning i glassed a nice stag and we snuck in on him but he got up and walked into heavier cover as we were setting up for a shot. 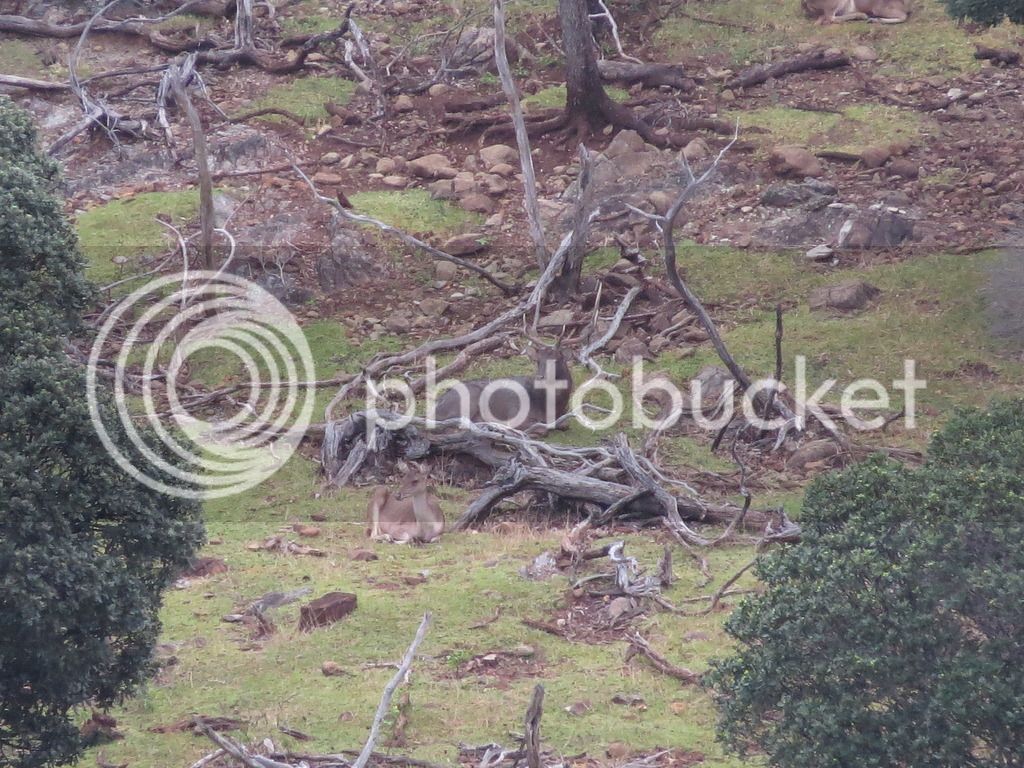 We left the group alone and returned a few hours later to find a big stag now with them and we snuck in on him, got a solid rest of the bipod and my mate put a bullet 10 inches low and underneath the body of the deer. Stag got away and we went back to re check the rifle. Our mates had shot it that morning and stated it was on the money at 200m, our shot at 200m showed it quite low so after a little adjustment we were back in the field.
Next few days we put in big pre dawn efforts, hunted till mid morning, returned for lunch, then back out returning to the farm house after dark.
I took this stag at 360m with the little .7/08 and found him the next morning. 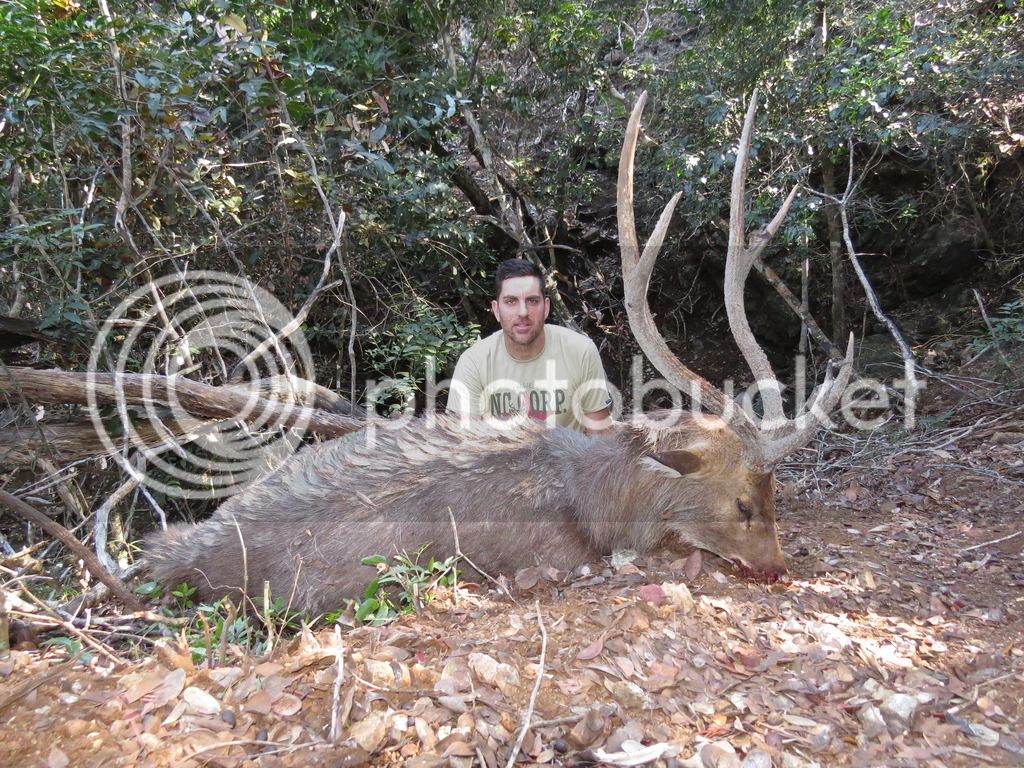 My mate had bad luck on a really nice stag and then found a big stag that only had one antler. He let it walk. Each day we were seeing lots of younger stags and lots of roaring activity was happening, but the older deer were few and far between.
Our new caledonian mates shot a few deer for meat. They butcher deer as clean and efficient as anywhere i have seen, no meat processor to do it for them here. 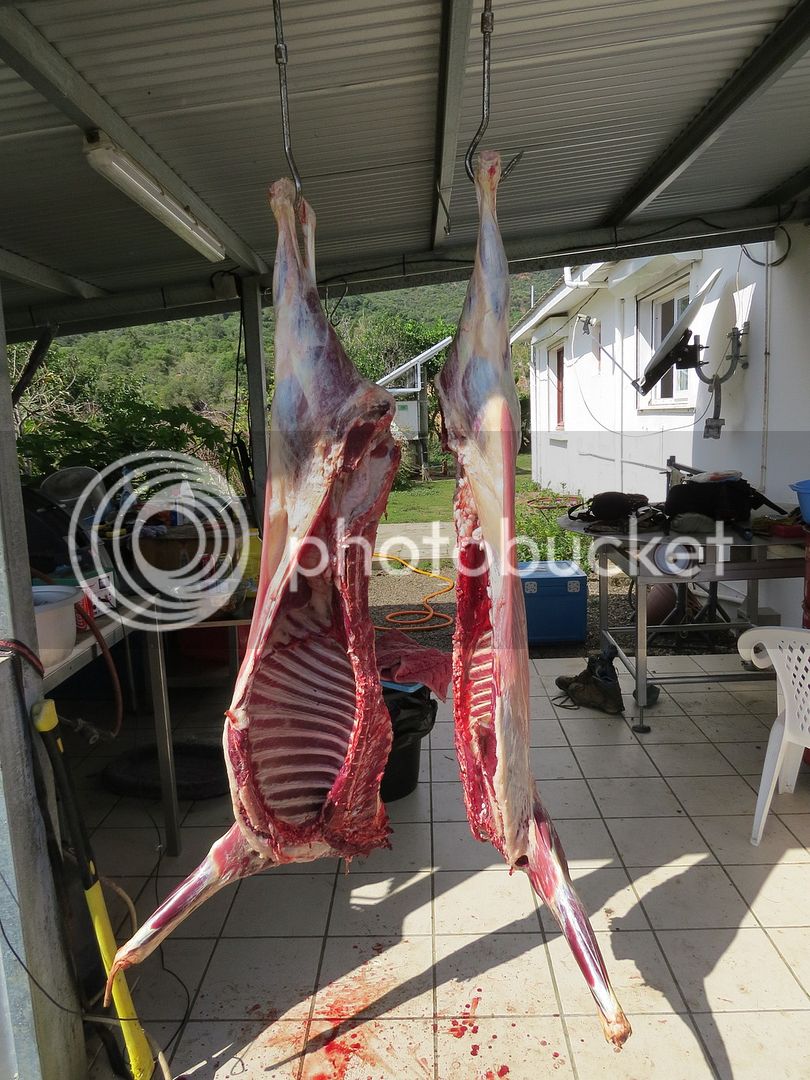 The food is always spectacular and we enjoy awesome cooking from a wide range of dishes. 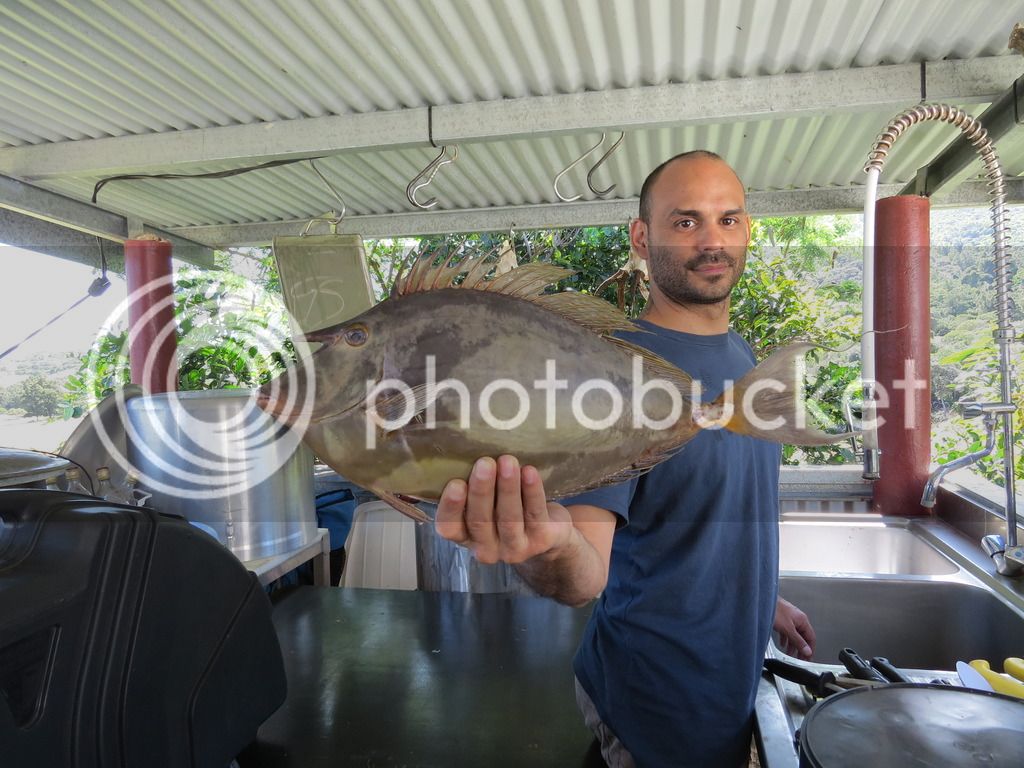 And we also got to eat a local delicacy, fruit bat. Once again it was served and i have to admit i am growing fond of it, one of friends wife skipped the breast portion, avoided the wings and went straight to the head to eat the brains, tounge, cheeks, etc etc, I'm not at that level of fruit bat love just yet...
Field dressing the fruit bats. 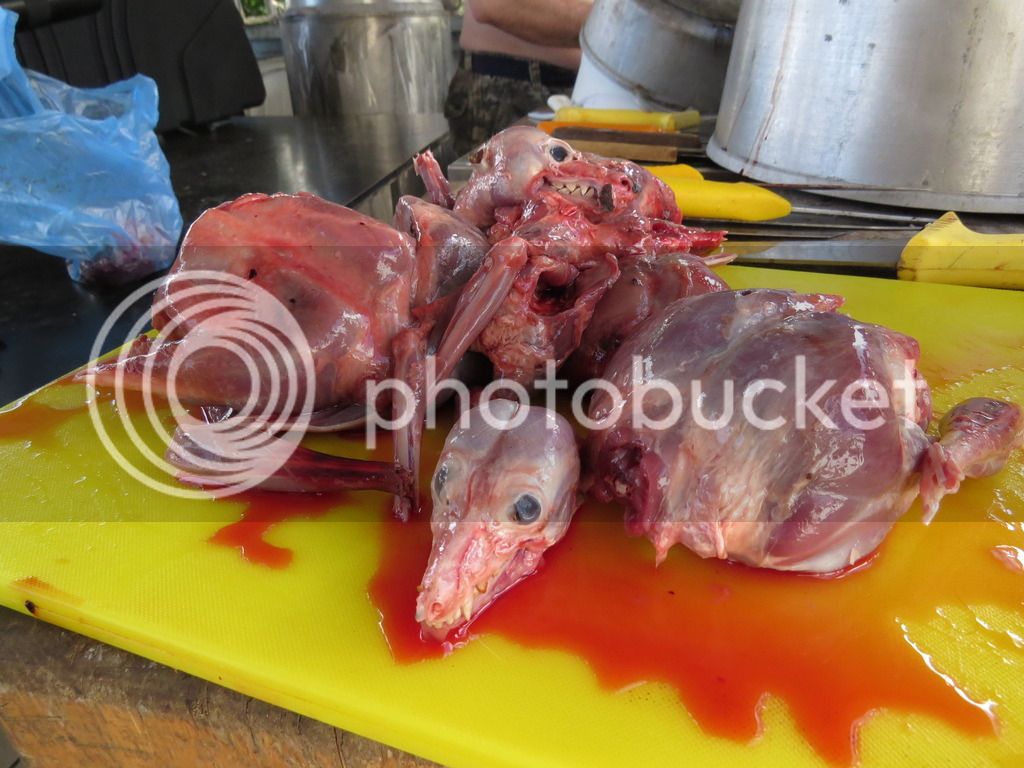 Stewed up and ready to be served. 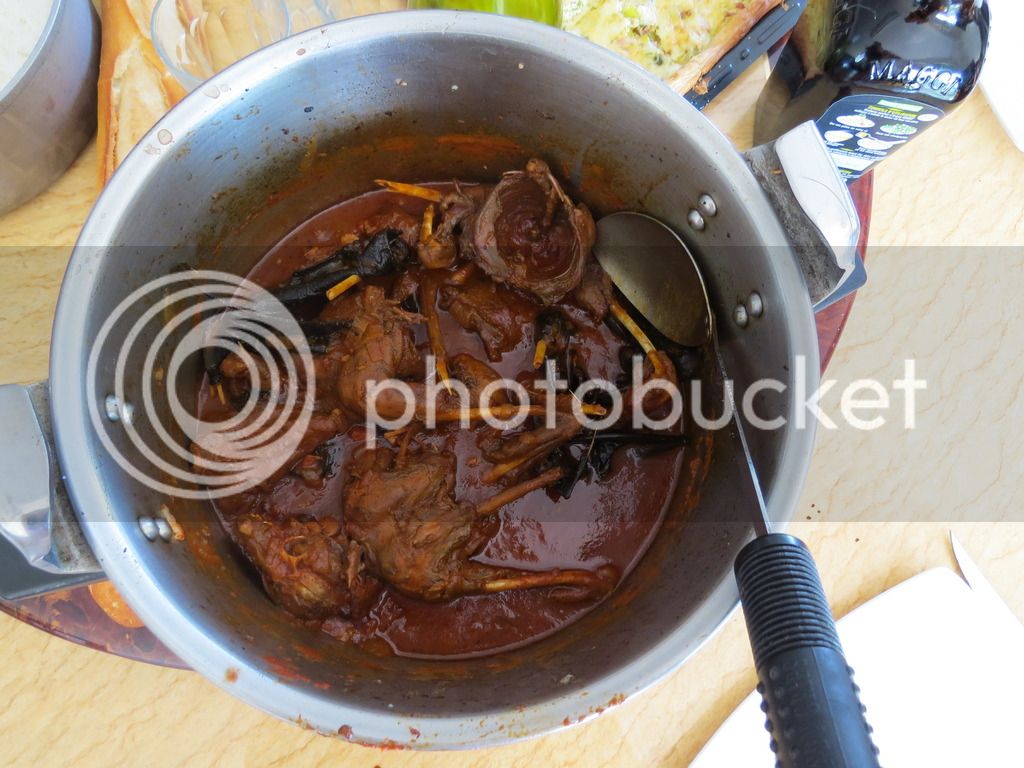 My plate of food never looked so good. 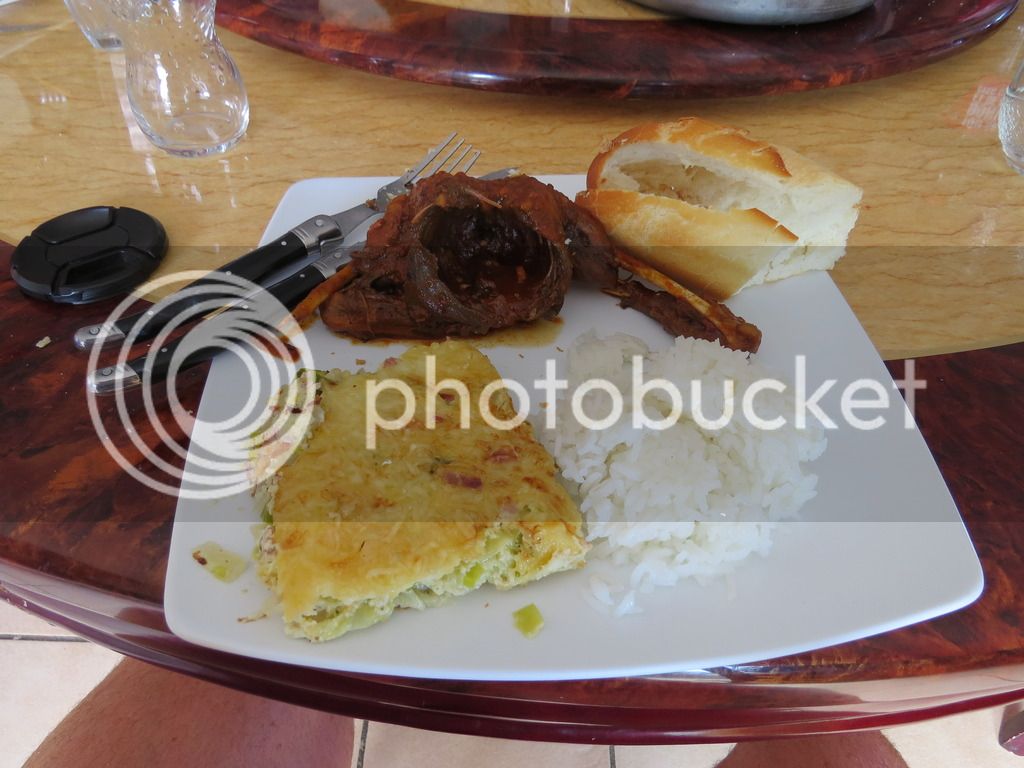 We thought a few of the older stags were bush bound and i had been hearing a couple decent sounding stags roaring in a heavy valley but hadn't been able to get a look at them despite solid efforts. I never did well in art at school, but thought if i drew my 'ideal' stag it would give me some luck that evening. 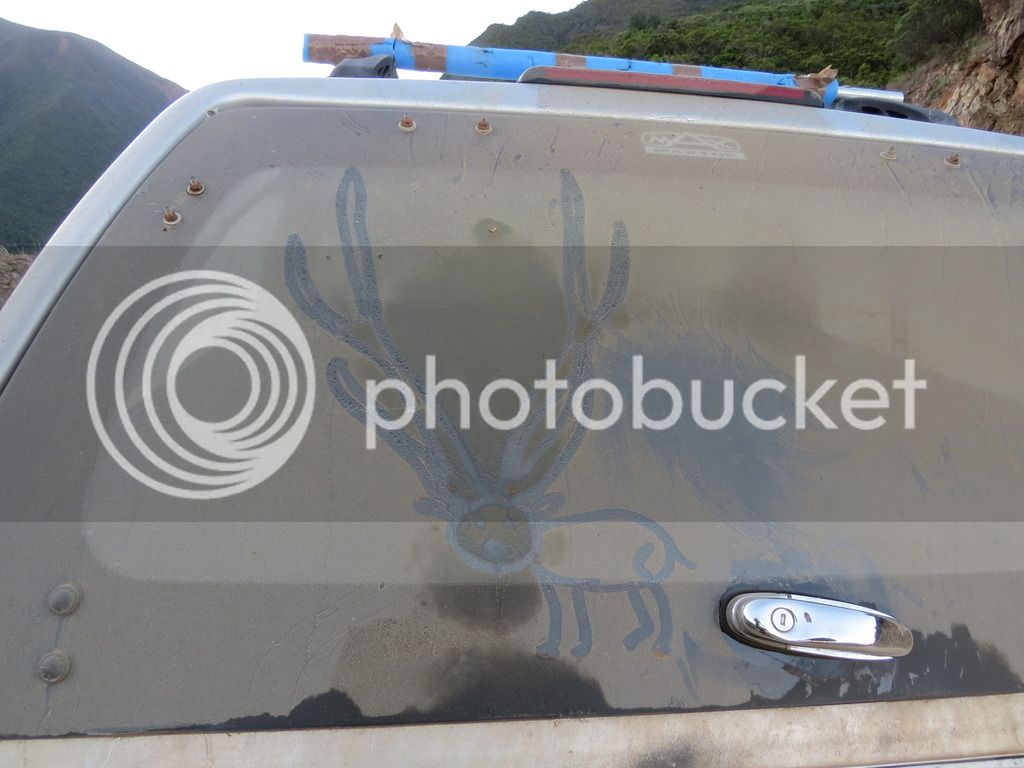 I set up on a high point and did a few roars and hind calls to get things going and eventually one of the stags appeared in a tiny clearing, gave me a shot and i put him down with another lengthy poke with the .7/08. Turrets eliminating holdover and guesswork make these types of shots so much easier. He was a mature stag, but with the drier conditions up north and the poorer feed then what is apparent down south, many deer will never grow really long antlers and this one was a good example. Still more importantly it was a great hunt and thats all that matters for me nowadays. Tape measures are irrelevant, age of animal and having a good time with keen mates is far more important. 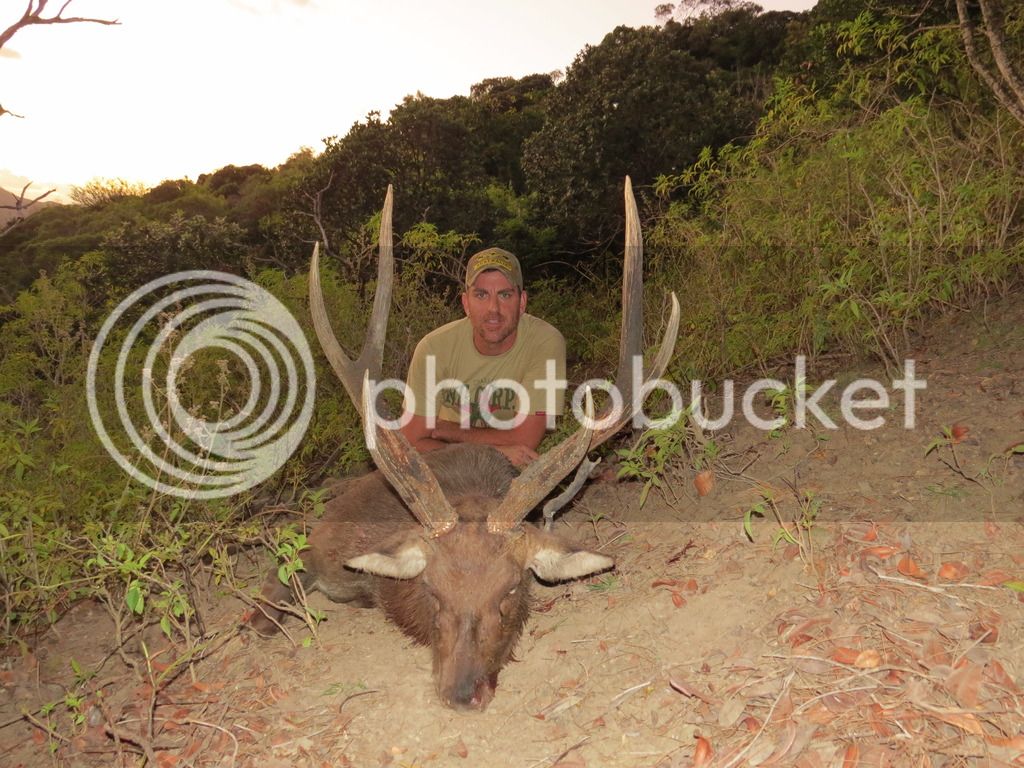 Next morning we switched gears and chased a few pelagics offshore and some reef fish. Was a blast and i speared fish with my local mates. It was the first time spear fishing with sharks swimming around me and i can say i was pretty cautious about them, but i didn't loose any limbs so that was a bonus. Fresh fish that night at one of our friends houses never tasted so good, a few beers and wine washed it down and before we knew it was time to drive back to the farm house and catch up on a few hours sleep. 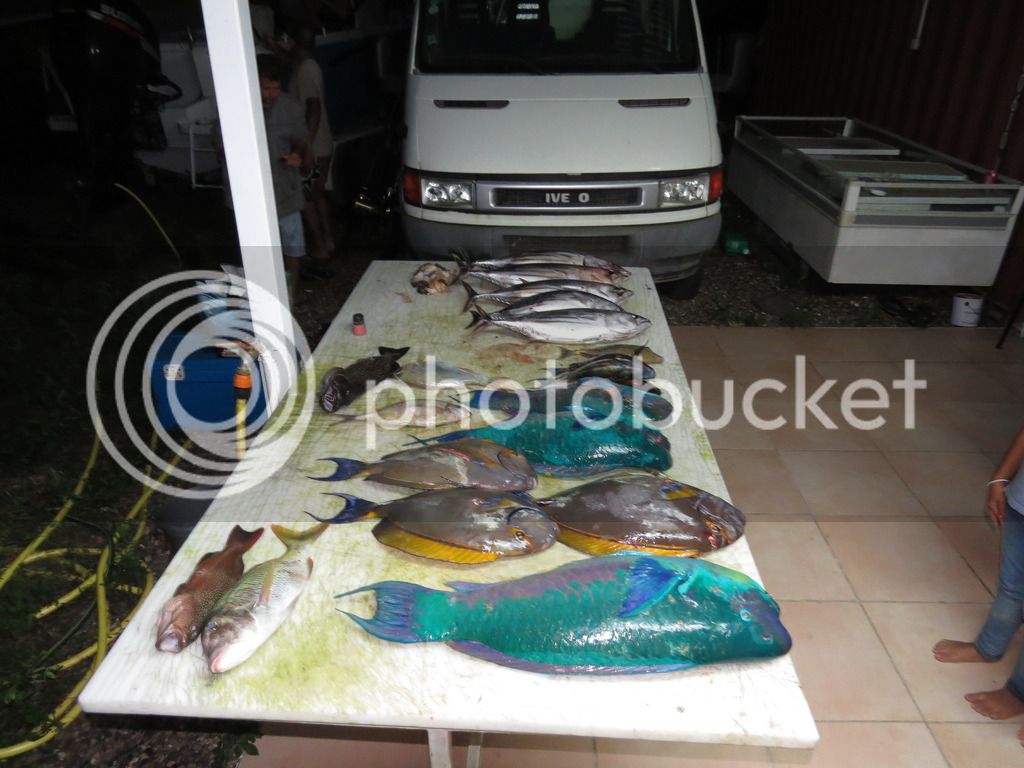 Next day we went back to a spot we had been seeing a few stags, right on dark we roared in this stag for my mate and he shot him, it was a bit shorter in the beams then we first thought, but my mate had been having really bad luck and had passed up a lot of deer so he was glad to get on the board. Looking more closely at this deer it was a similar age to some of the larger stags, he just never grew his antlers well in the environment. 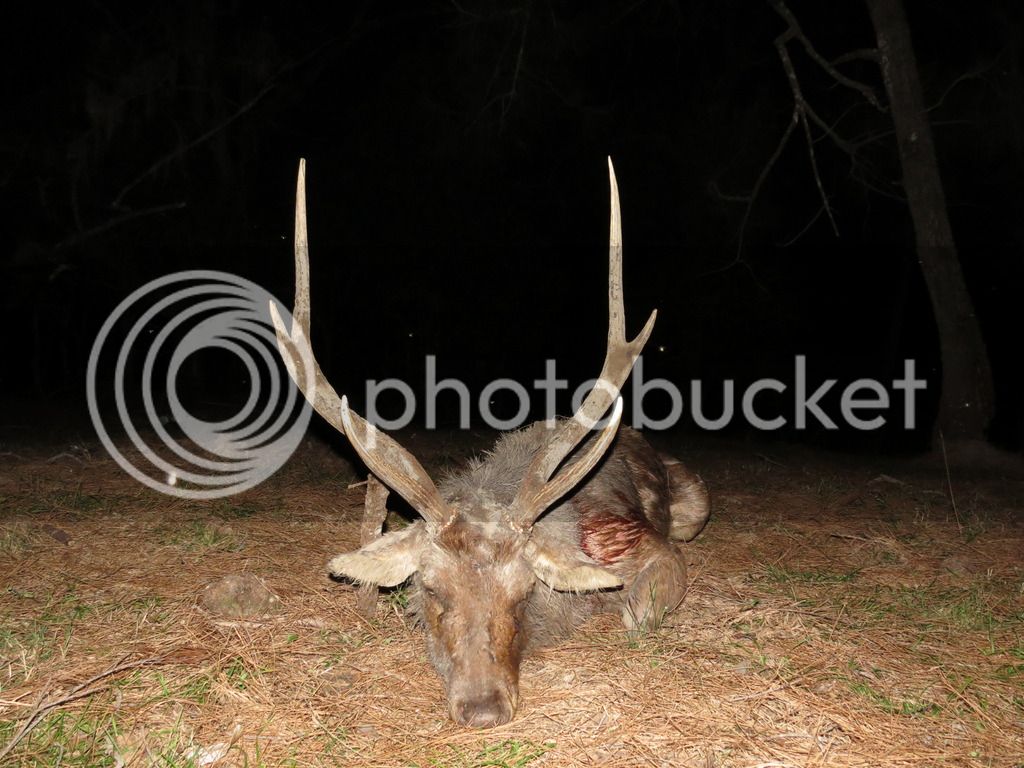 It was then time to head back south, and we only had a morning left to hunt before we had to get sorted to fly home the following day.
We looked over a couple dead heads that were very nice. An extra off the back end made this deer unique. 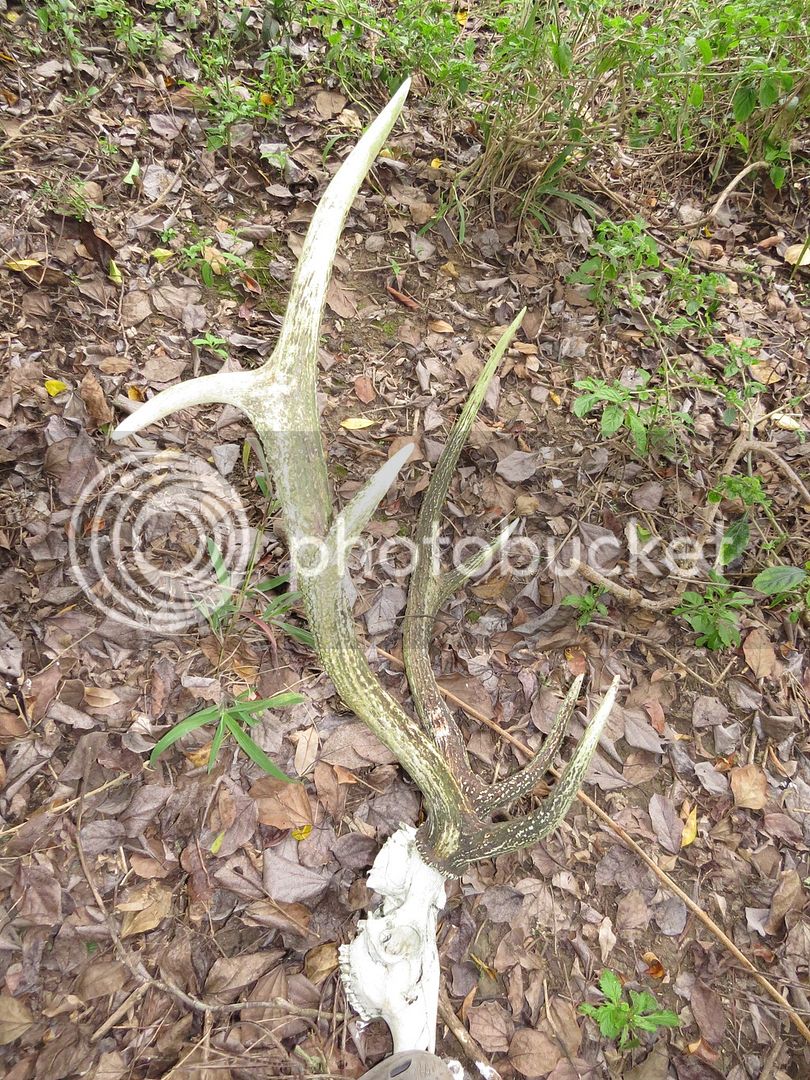 This stag was a typical big long antlered rusa for the region, plenty of feed down in this region grew larger bodies and larger antlers. 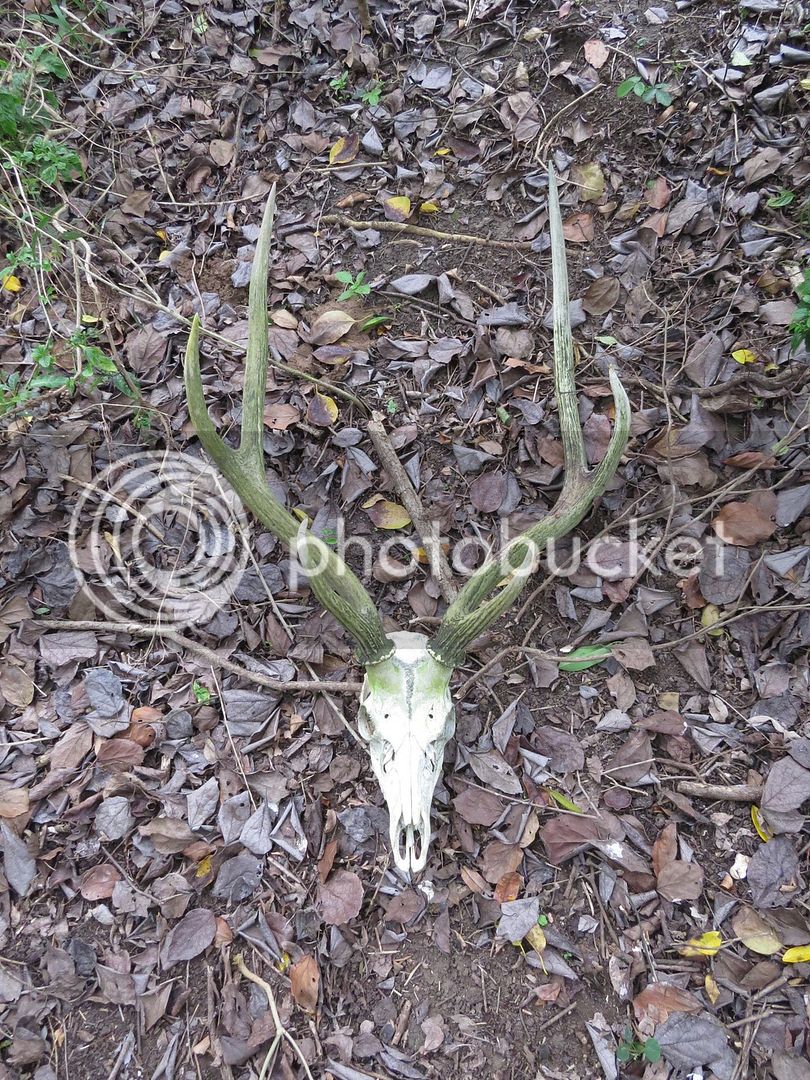 We were into roaring stags at dawn early the next morning and looking over them trying to find a couple mature deer. With the clock ticking i shot this stag very heavy stag across a gully. Im covered in blood and looking buggered as our mates had some meat orders to fill and we had to carry out any stags whole from this location. I had just carried this stag off the hill down to the creek flat. It was all on the back and a fair old challenge with the bigger deer. 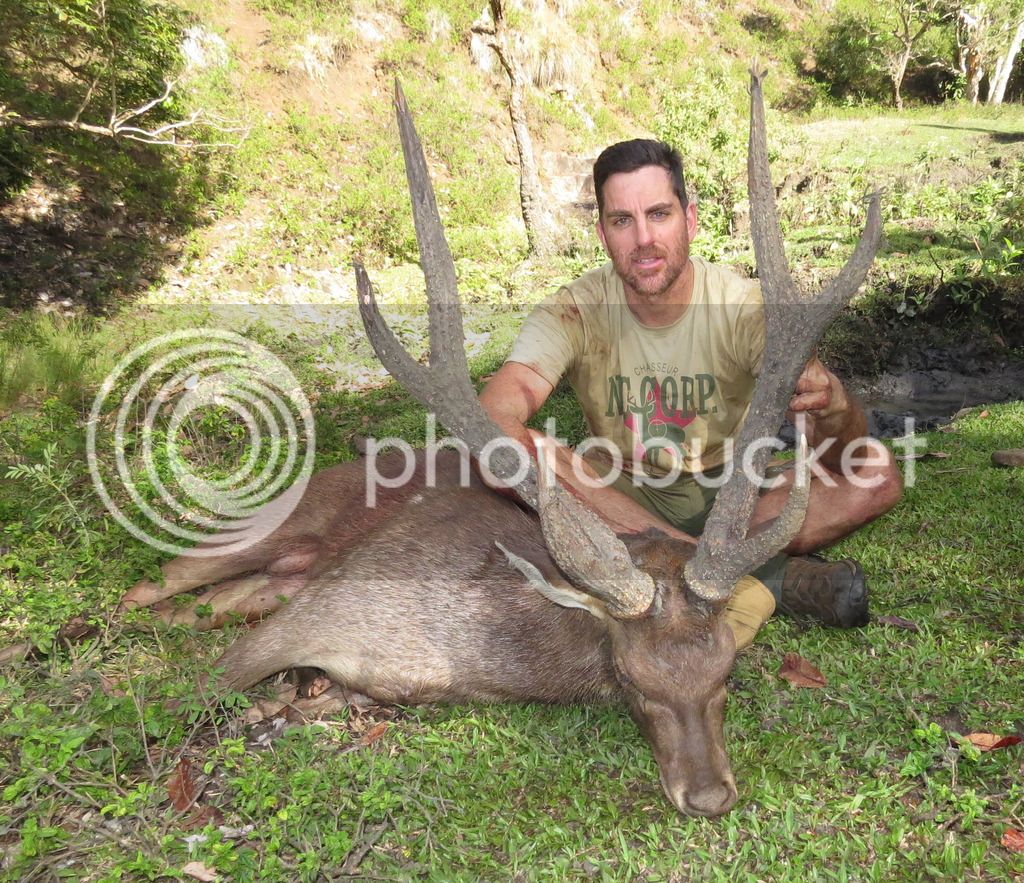 My mate then shot a real nice stag and as we were taking a break another stag came over a ridge and bedded at 280m. All he had was his head visible and from glassing him he looked quite good. My mate encouraged me to shoot him for the meat and i put one into the base of his ear from a bipod rest. 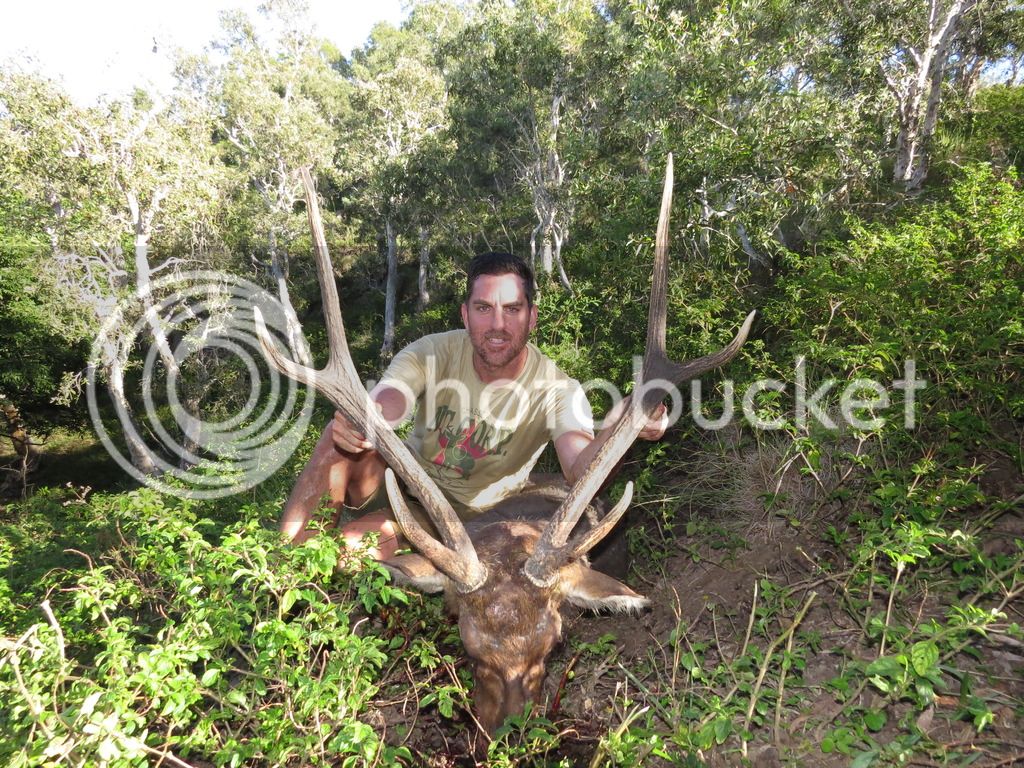 They are fierce fighters in the rut and this stag had a piece of antler tip embedded into his forehead. 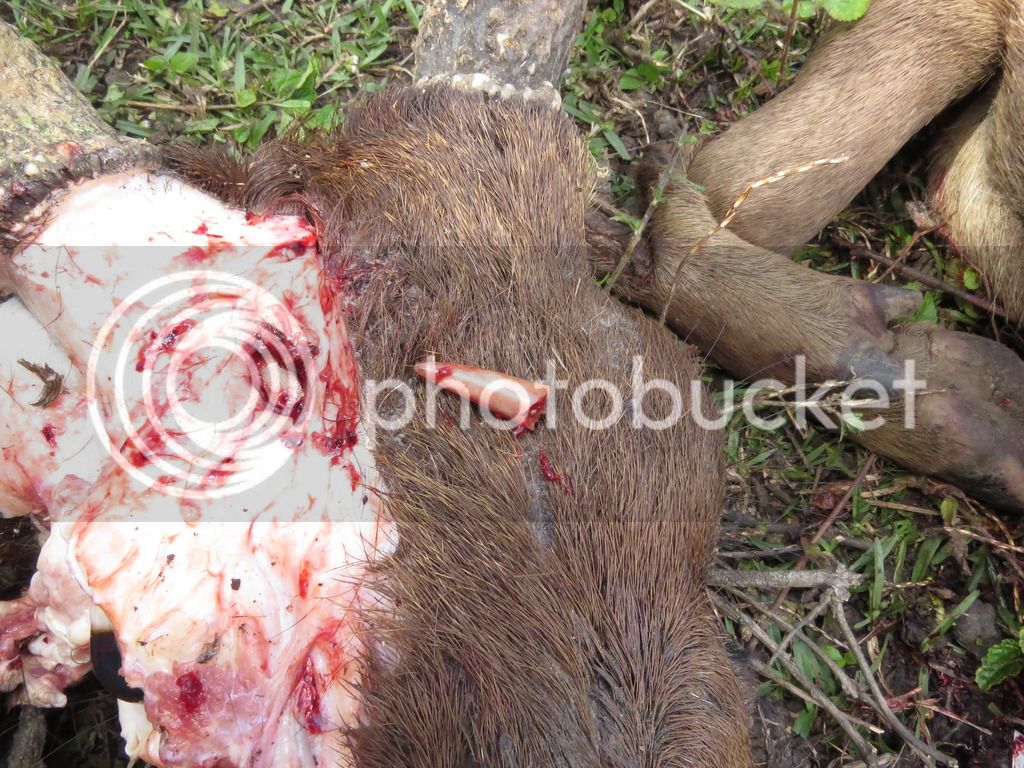 We all pitched in and it was one heck of a carry out loaded up with gear, optics, rifles, antlers, stags and of course their meat. Very happy to make it back to the 4wd's and luckily there was a 6 pack of beer in the truck in the cooler and it was possibly the best beer we had all trip. 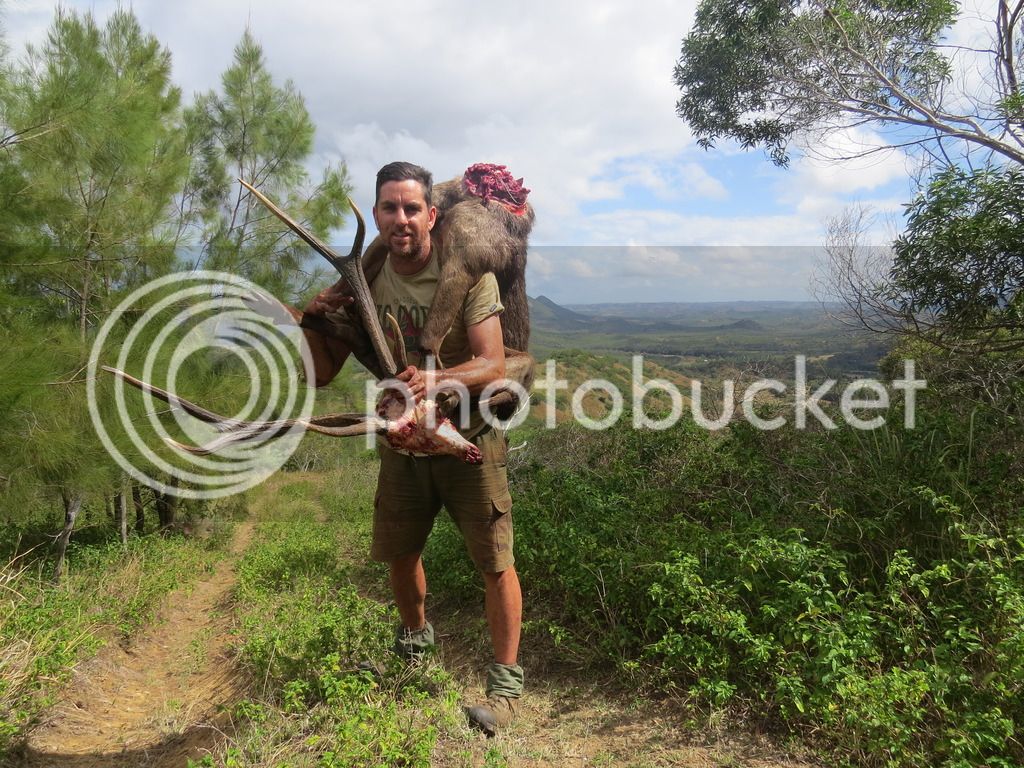 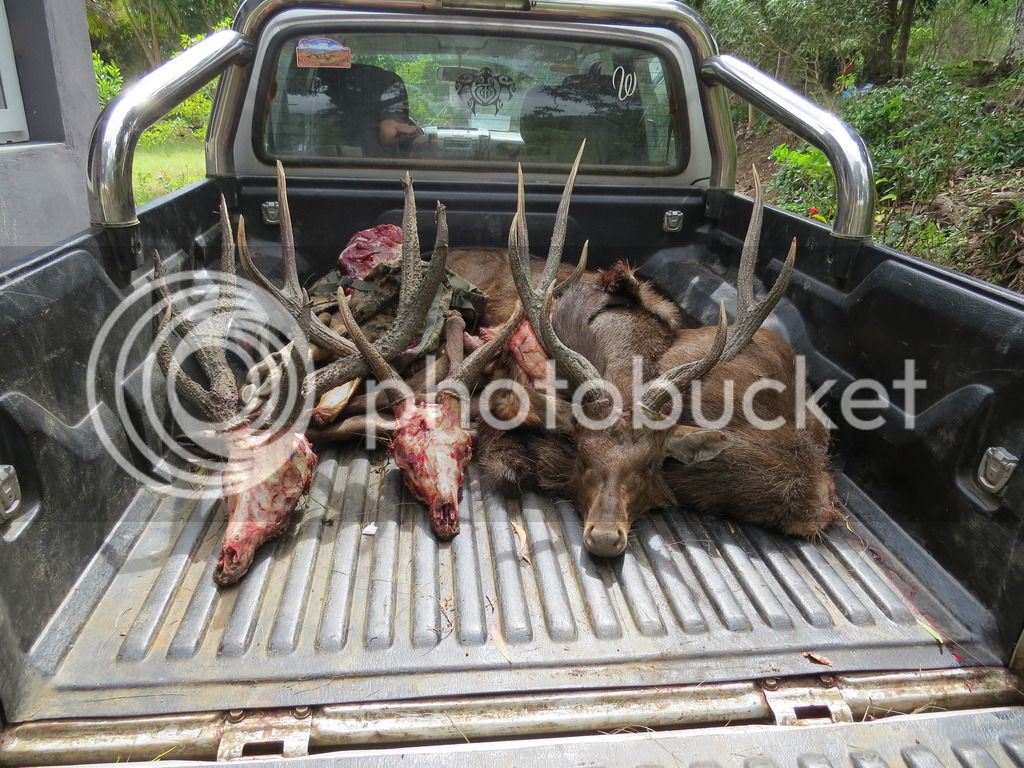 That evening was spent boiling and cleaning heads, organising gear and getting ready for the flight home. 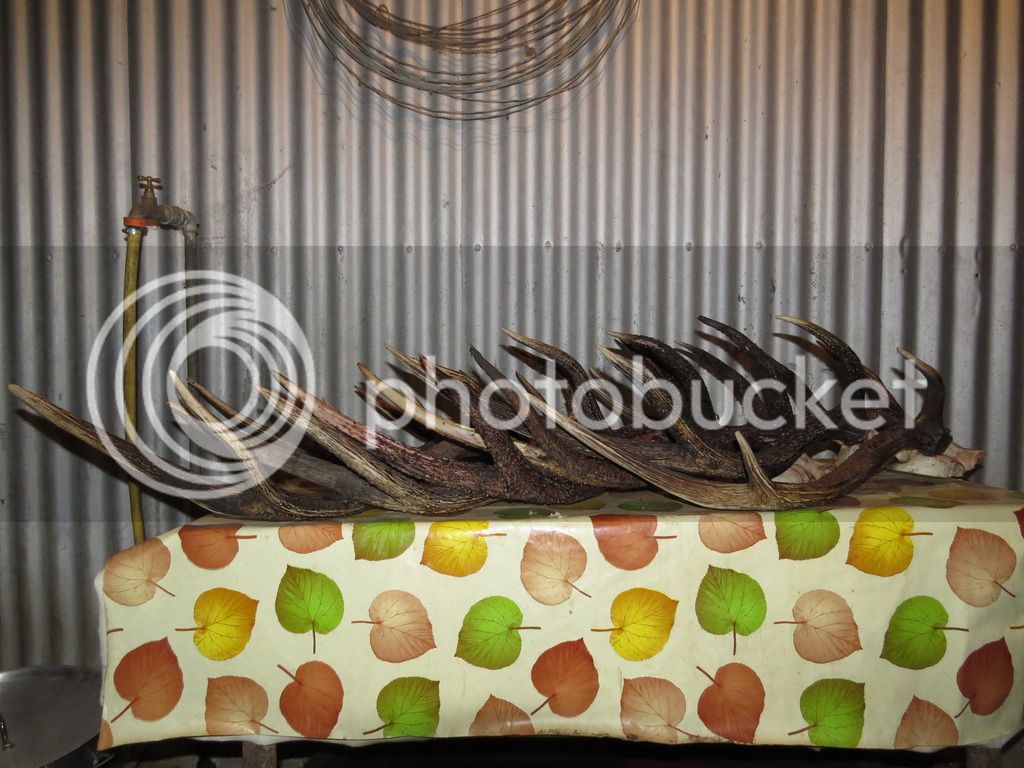 It was an amazing hunt with very good friends, non stop laughs and adventure in a foreign country and we looked to forward to what 2016 will bring in this wonderful destination.
Last edited: Aug 17, 2015

Quite literally the other side of the world. Amazing adventure. Well done.

Quite the adventure....a pile of bone. Good stuff as usual.

Wow! You make this look easy. I know its not. Congratulations on a great hunt and adventure.

Sweet hunt... I'm Googling fruit bat now! Looks like a fox skull and not something I'd want looking up out of the stew pot.

Great recap! Always interesting to see how it's done around the globe.

Gerald Martin said:
Wow! You make this look easy. I know its not. Congratulations on a great hunt and adventure.
Click to expand...

Thanks guys, yes your right mate, there is a lot of hard work in-between getting the crosshairs on the older type stags.
K

cheers
draw the line at bats

Great trip and congrats on the stags.
1

Gerald Martin said:
Wow! You make this look easy. I know its not. Congratulations on a great hunt and adventure.
Click to expand...

This exactly! Heck, I have trouble planning a trip in another state. Something like this would be WORK to plan. That said, it looks like a great trip! Well done and thanks for sharing.

How did they catch/kill the bats?

Another great adventure.. Thanks again for taking us along.

Heck of an adventure and quite the smorgasbord when it comes to food.

Awesome photos. Thanks for sharing.
?

Your posts never lack cool factor. Sounds like an extraordinary trip.
You must log in or register to reply here.