Back from my first real scouting trip on my goat tag.

Main goal was to cover ground and get a feel for the different parts of the unit and I succeeded in that. Still a little worried as I didn't see many goats where everyone tells me where they will be during hunting season, but I did find some when I went up higher where there was still some snow.

Got stuck in about an hour long Bisonjam driving through Lamar Valley getting over to the unit from where I was staying in Montana. 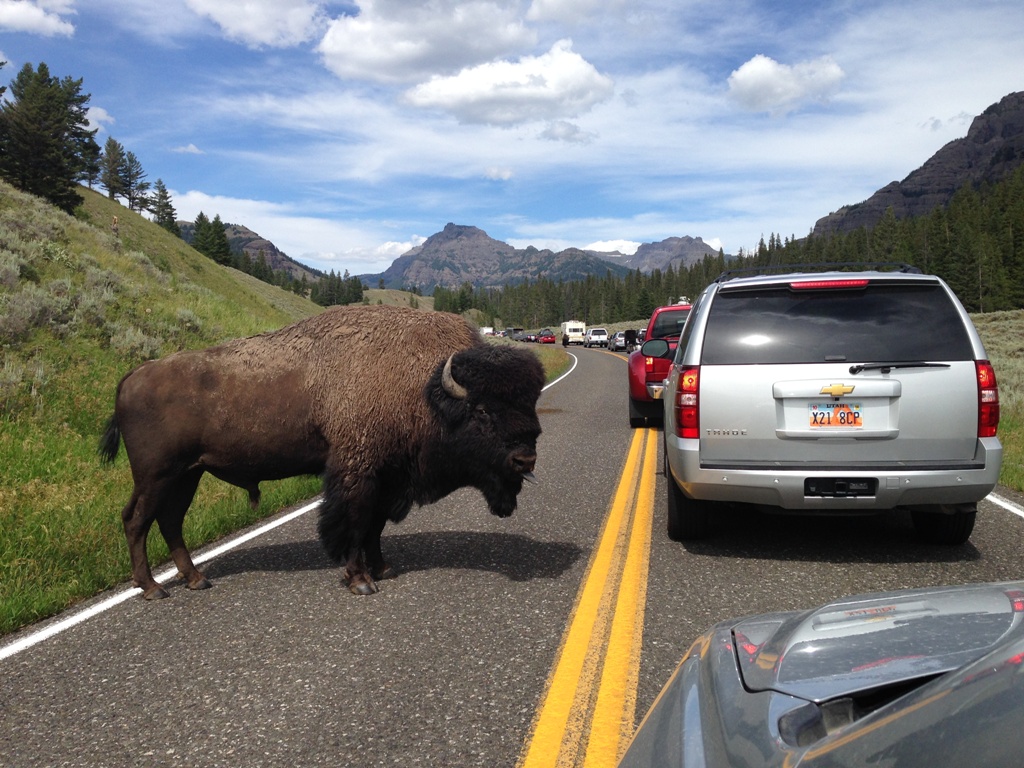 Glassed a lot of cliffs. The first evening I saw a nanny and kid at about 50 yards on my side of the canyon and that was it. The next morning I saw a lone goat about 2 miles down the canyon about smack dab in the middle of the cliff.

Click the link for the full sized picture - http://padens.com/v-web/gallery/albums/album07/clarks_fork_west_pano.jpg

Ran the Morrison Jeep trail later that morning and afternoon from the top side and saw about 30 head of elk up on top, but no goats. Some really pretty country though. This is the drainage that ends up in Deep Lake.

It looked pretty rough to try to drop down into from the top. There is a trail that goes up to it from the bottom that will be an option later in my hunt if we aren't seeing anything in the other spots.

I was told this was a cellular antenna, but there is no power coming to it and those don't look like any solar panels I've ever seen. Not sure what it is but it is up in the middle of nowhere. 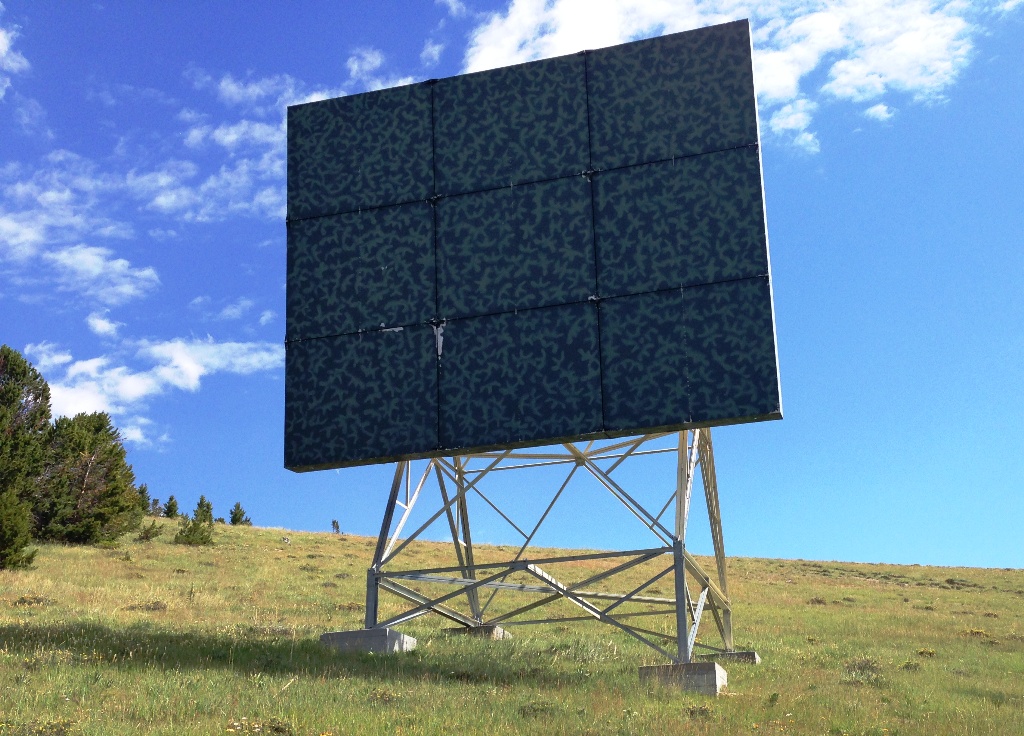 On one of the cliffs I was looking at there was a box on a shelf. Another perplexing thing to me. Not sure how you would get to the box without full blown repelling gear. The cliff goes another 300 - 400 feet down under the box too. There was some type of box inside on the upper right corner as well but I couldn't get a good enough picture to show it. 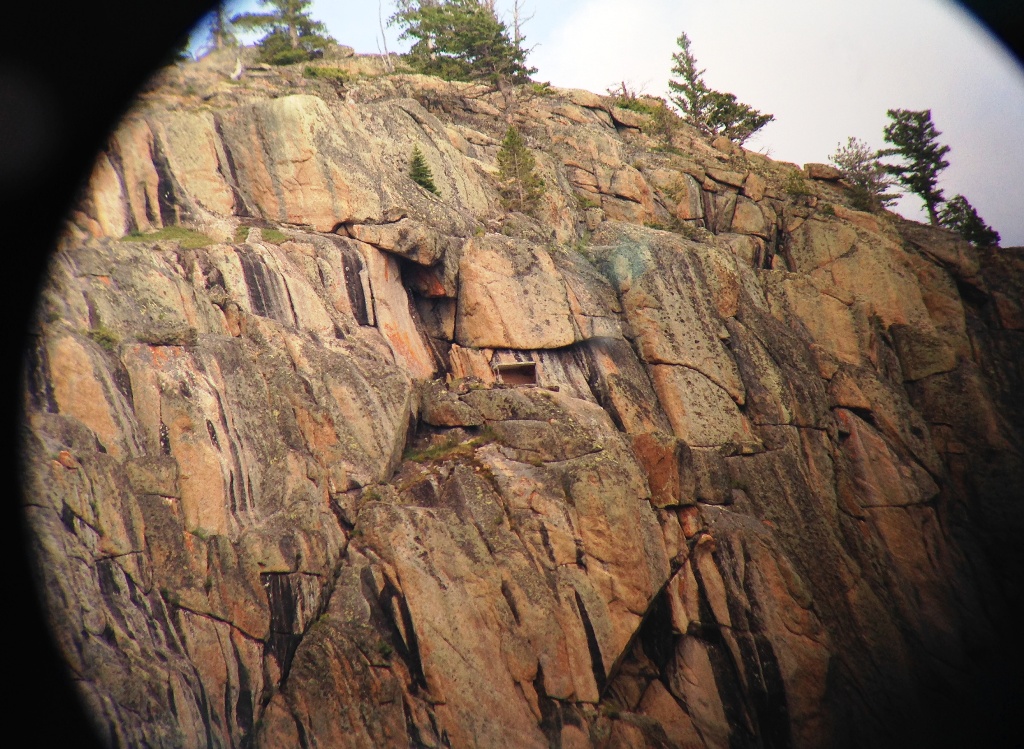 After abandoning all the spots I had been told to check out, I just drove the Beartooth Highway stopping on all the pull outs and glassing for goats. Found this group of 9 nannies. I thought I counted 10 when I was watching them, but all the pictures just have 9 goats in them. These were about 1/2 mile away. 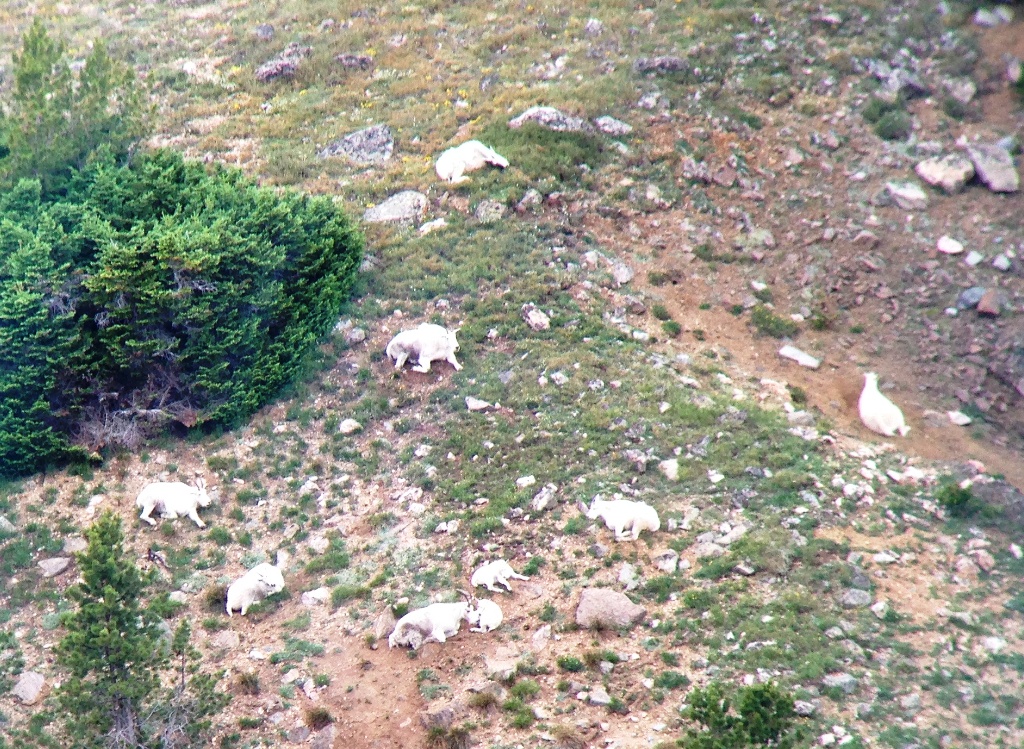 There was a lone goat hanging out about 2 miles away on this cliff right in the center of the picture where the reddish rock is, but he got up and started moving when I was taking pictures. He's (I think it was a billy) the bright white spot moving into the pines about 1/3rd of the way to the left of the screen in this picture. 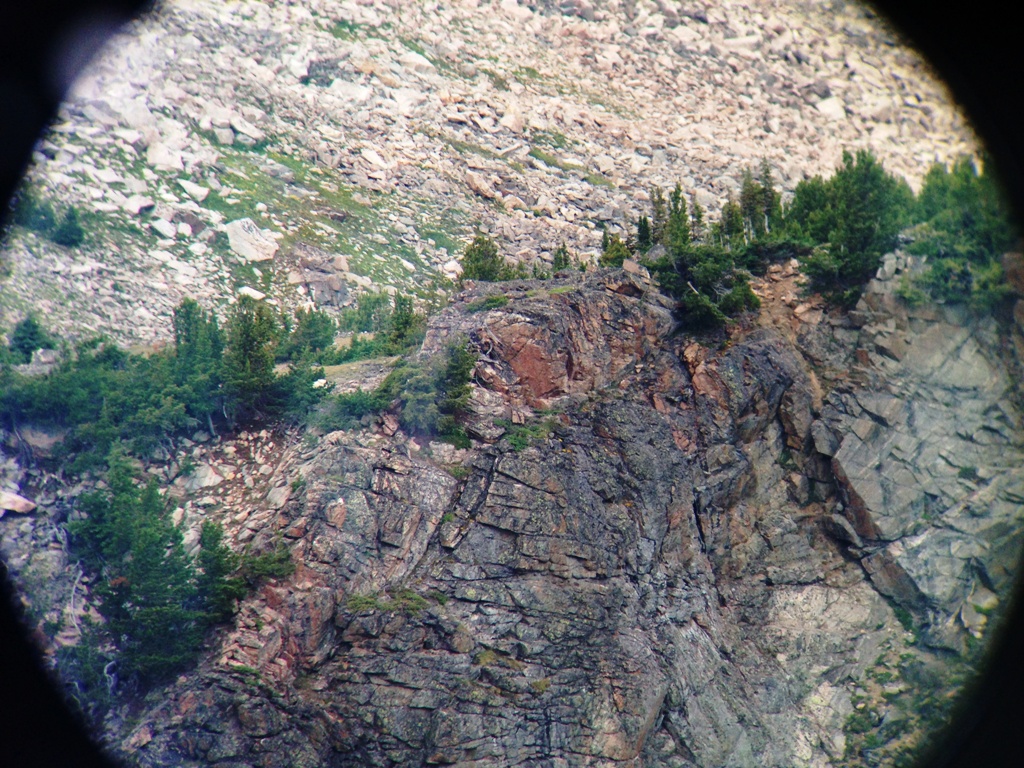 I tried using a fancy digiscoping setup I bought a few years ago but gave up on it and was just free handing taking pictures with my iPhone through the scope. I'm either going to rig up a cheap adapter with a measuring cup for my iPhone or break down and buy one of the PhoneScope setups off camofire. 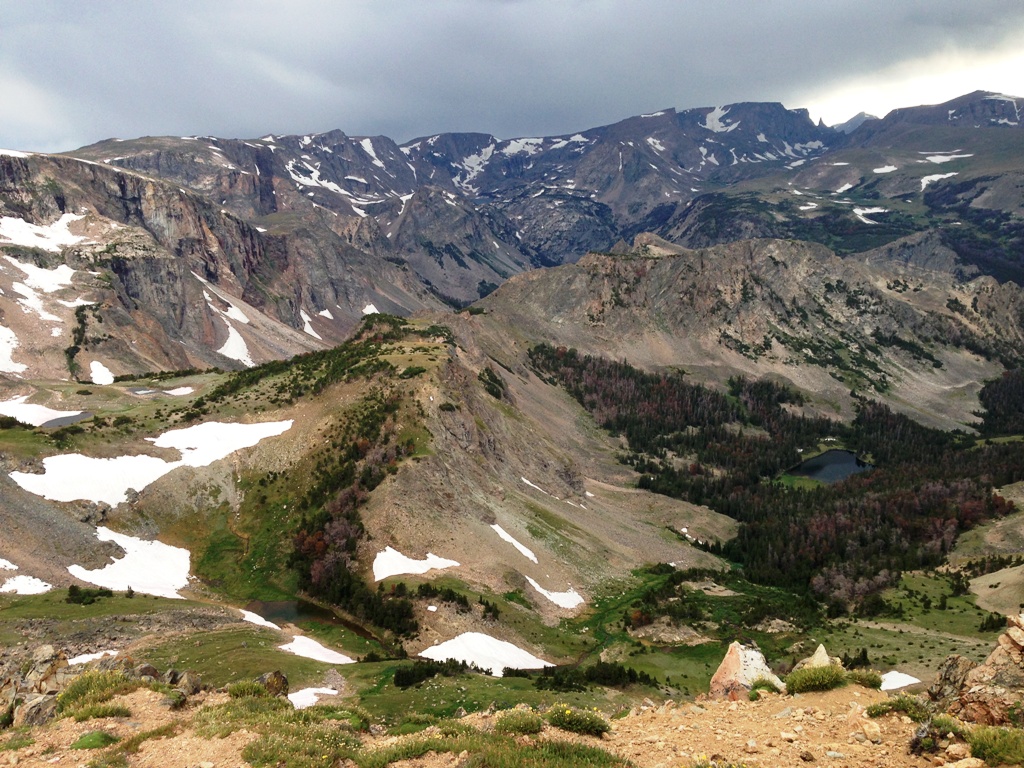 Over the course of 2 1/2 days I saw more elk than goats by a wide margin. Took this picture through my binoculars of some elk sunning themselves on a sand bar on the river. 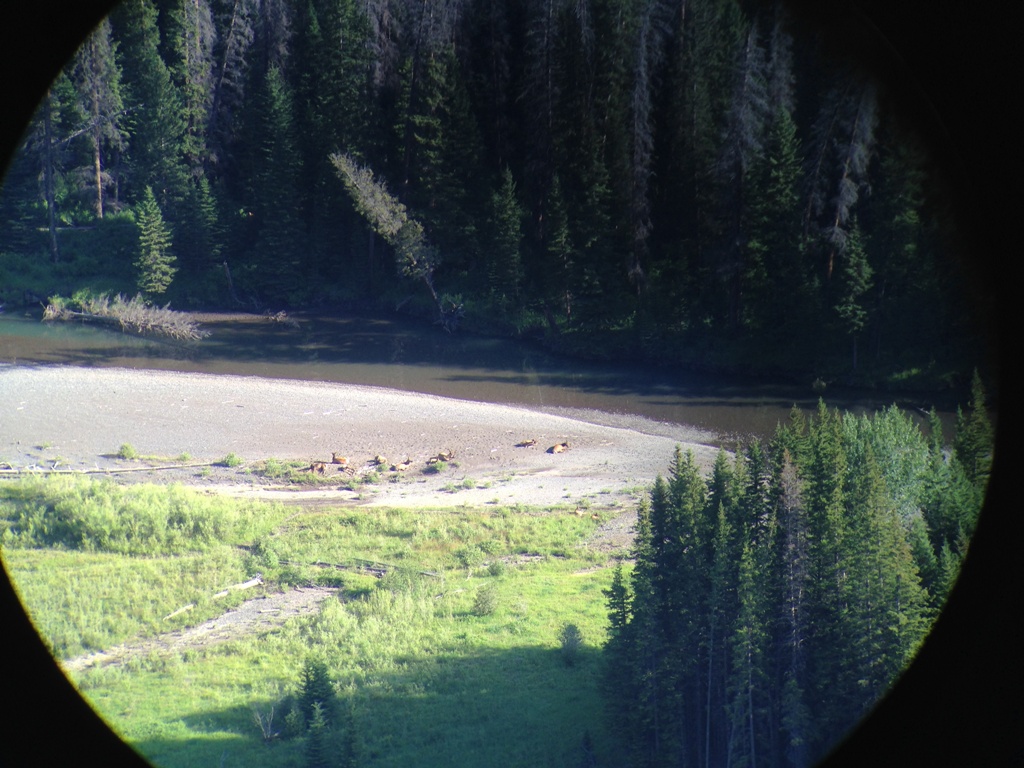 Almost ran over this band of bighorn ewes running to the Morrison Jeep Trail switchbacks on the last day of scouting. There were a few more higher up the canyon, but no rams that I could see. 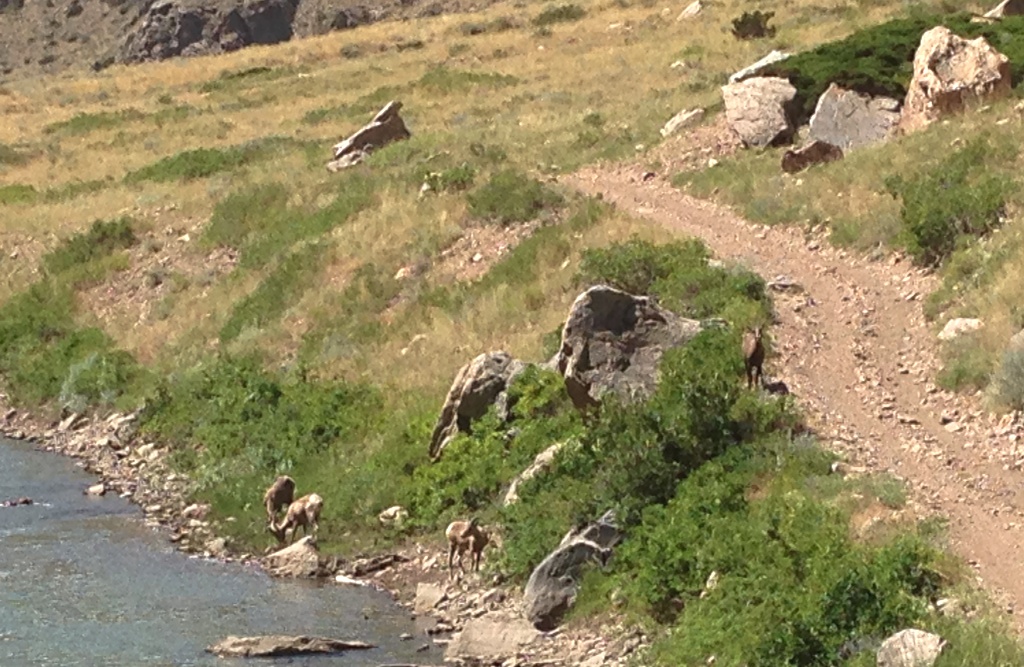 Pictures never do hills justice, but this is looking up the switchbacks of the Morrison Jeep Trail going up to the Dillworth Bench. I think there are 21 switchbacks to get to the bench. 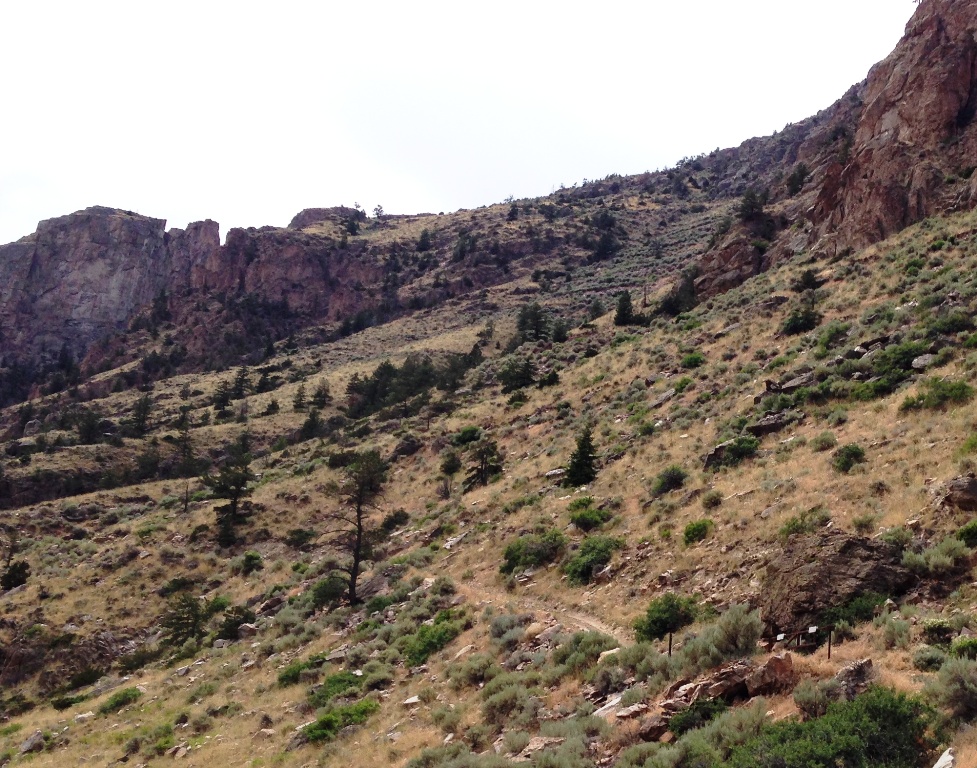 This is about 3/4 of the way up looking back down the switchbacks. 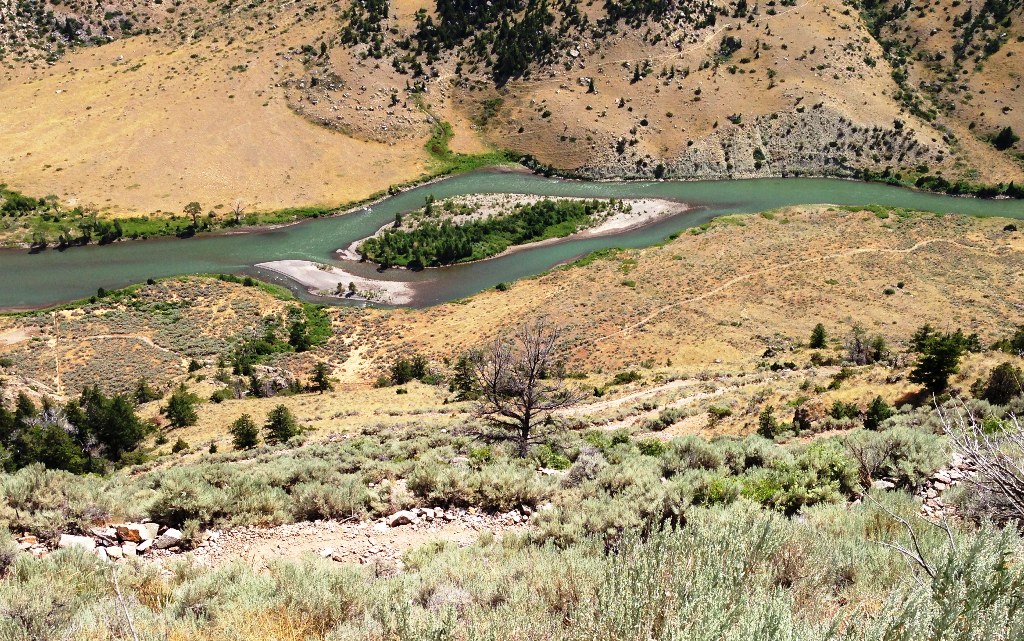 This is at the top looking down the last switchback. 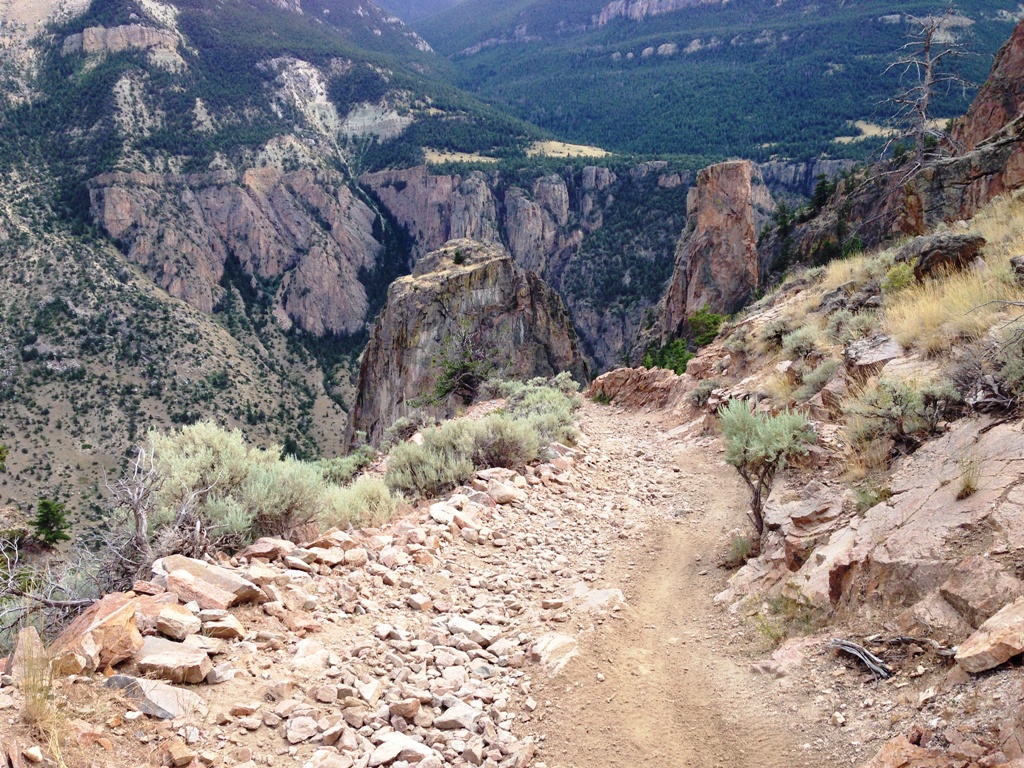 I had been warned to bring a spare tire and thankfully at least had a compressor and some plugs. Ended up with a cut in the rear tire of one of the ATVs that took 5 plugs to fill. Somehow it ended up holding until we got back out thankfully!

This is up on the bench looking to the west. 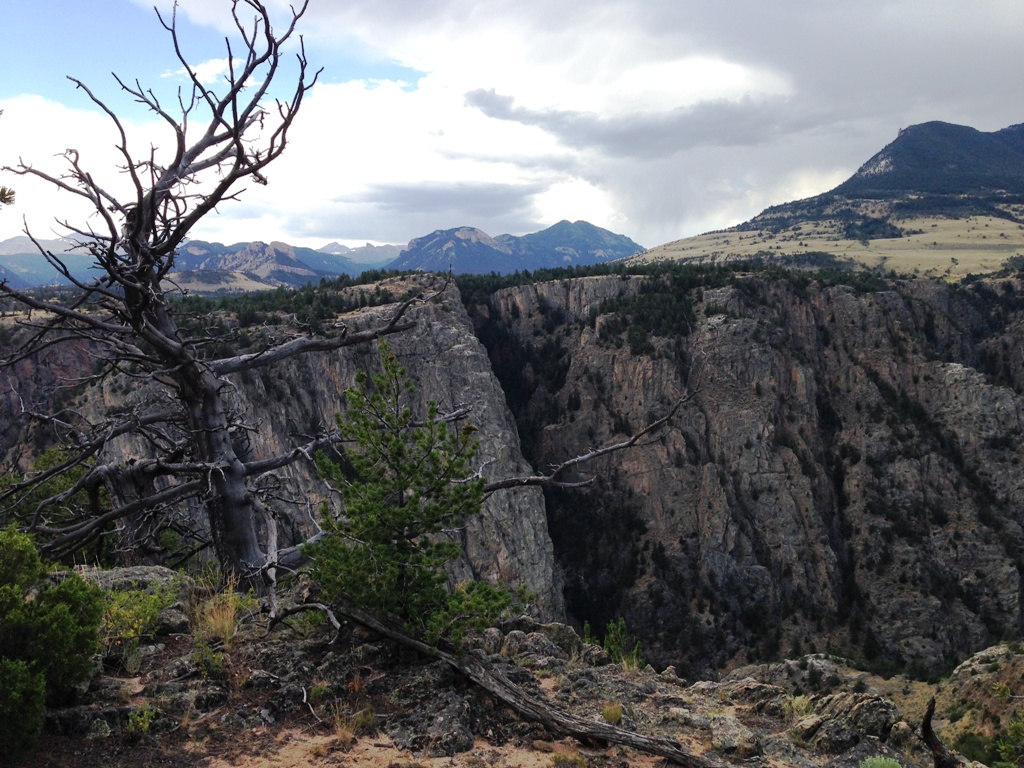 My definition of what is steep and what isn't has been completely turned on it's head. Grades that I would have never even considered previously are now places where I'm telling myself, "that looks like a good spot if I needed to get up or down that area". I'm also going to try to contact some mountaineering type folks to inquire about recovery options if I end up with a goat down in a spot that is not retrievable for me. Every time I looked over an area I kept asking myself, could I pull the trigger on a goat if it was there? What about there?

Overall I felt like it was a successful trip. Met one local that gave me some really good information that matched up with what one of the guys I had talked to that had the tag a couple years ago told me. Covered a lot of ground and feel like I know my way around the unit a little bit at least. Was somewhat disappointed that I didn't see more goats and any big billies or anything, but from what I've been told they will probably not be in the same spot in 2 months anyway.

This is definitely a different type of hunting than anything I've done before. I swing back and forth between thinking it should be a slam dunk to thinking that there is no way I'm going to fill my tag. Still hoping that with 9 days to hunt that I'll be able to find a nice mature billy in a spot that I can shoot it and recover it.

Still would welcome any suggestions or input.

Amazing photos and simply stunning scenery. I'm going to enjoy following your hunt from the comfort of my recliner and laptop, that looks like it definitely fits the category of 'steep.' I wish I could help, but all I can offer is a good luck wish!

Great pictures! Looking forward to the rest of the story.
1

Your goat season is off to a great start.

Good stuff! The box on the cliff was likely a hack box for peregrine falcons, back when they were listed under the ESA and being reintroduced.

Hack boxes have gone through some changes since the initial efforts 30 years ago.

Great pictures! I've always wondered how the goat hunting is off the beartooth, I'm excited to see how your hunt turns out.

Finding Billies seems tough this time of year, or at least I haven't had any luck finding them yet. I'm sure you'lll turn up a good one.

That is so cool. One of these days I am definitely gonna go out there and see that country with my own eyes!

I was up in my moose unit S. of Troy yesterday and ran into an older gentleman and his wife who have a mining claim that have been seeing goats in their little canyon way far away from the high peaks and cliffs. He said they are just cooling it down in the deep canyon where it's 20 deg. cooler. There are some small cliffy places and it's still way steep. They get down to their claim with ropes! Probably no help, but I thought it was very interesting.
R

Great pics. I look forward to reading about the hunt.

The first pic is priceless. Anybody who tries to claim Yellowstone bison are "wild" needs to look at that picture. To say they have no fear of humans is an understatement.

That is some wicked steep country makes my legs burn just sitting here at the desk. Shew hope I can goat hunt before I'm too old to do it.... Can't wait to hear the rest of the story in a few months.

Wow! Incredible photos - jealous of not being there in person! Whack a nice goat!

Nathan, great pics!. I wouldn't get too freaked out about not seeing a lot of billies right now. According to a friend of my who has been on several dozen goat hunts and spend a lot of time in the wilderness, many of the billies will actually spend time in the timber during the hottest parts of the summer.

That is a passive reflector, not really an antenna. They bounce the RF beam off it to get around corners when line-of-sight isn't possible. I have no idea what the boxes could be.

really some cool pics. good luck on your hunt!

Thanks for the info and comments.

The passive reflector makes sense, I sure didn't see a way that power was being generated to actually transmit a signal.

The hack box also makes sense. It seemed larger than the one on the Virginia site, but also probably pretty old as well. Maybe it had a screen on the front at some time that is missing now. Was pretty odd glassing the cliffs and seeing a box sitting there.

Thanks for some PM's as well from so folks with some more spots to check out. Hopefully when the season rolls around I will have plenty of alternative spots if the ones I've looked at so far don't pan out.

Still nervous about the mountaineering perspective of this. I probably do need to break down and try to locate someone as a backup in case I end up with a goat down in a spot that would be too dangerous to try to retrieve. I don't want to end up in that situation, but I can see it happening with a goat that doesn't end up anchored on the initial shot or something like that.

If a goat is on a cliff, do you just try to wait it out and hope it moves to a better spot or what?

Thanks, Nathan
You must log in or register to reply here.