I know the focus of this site is for OYOA. 95% of the time that is what I do, but there are rare occasions where I make an exception. This was one of those times and it was just too good to not share. I know the word epic is overused, but I just can't think of a better word to use to describe yesterday. My oldest son lives out of state and we both share a love for fishing. We decided to book a one day fishing trip with a guide. Now granted I fish all the time, and frankly, I've never paid a guide to fish in my own state. I've done a couple out of state trips for salmon or ocean fishing, but in state, I've always just done it myself or with friends. However there are times where a guide is either required by law or it's just more practical to use a guide to reach an area. For several years I've wanted to fish The Gates of The Mountains. It requires a boat and that is something I do not have. In short, it's a whole lot cheaper to hire a guide for a day than buy a boat anydangway. Plus the guide or guides in this case are people I already knew, and had developed a friendship with even before they started guiding. I knew they knew the area I wanted to fish really well. Even more important they specialize in jig fishing, which is my favorite way to fish. In fact they are the guys that I buy 90% of my jigs from.

My son flew up Friday afternoon so he could spend some time with my family. Yesterday morning we got up bright and early and met Trevor Johnson and his dad Kit Johnson of Kit's Tackle at the Gates of The Mountains Marina. So basically it was a father/son team guiding a father/son team. I knew these guys would get us into fish, and boy oh boy did they ever deliver! We caught so many fish between 18" to 24" that we completely lost count. It was a unique experience for both us and them. My son and I fish a lot so we did not show up for amateur hour. We brought our A-Game and it worked out really well. For Trevor and Kit it was nice for them to not have to baby sit and be constantly teaching, untangling lines, or tying on new lures every five minutes due to snags. We all lost a few jigs, including Trevor and his dad, but it was very few. It was fun because we all got to fish and everyone caught decent sized fish, and decent numbers of fish. Both my son and I would have felt just plain weird had we been the only two fishing. While it was guided it felt more like just a day with friends on the water, and in reality, that was just what it was. The only difference being we paid them for their time at the end of the day. I can honestly say it was worth every penny and more. The weather was perfect, the fish were biting, and the company was outstanding. If I had deep pockets I'd do it again tomorrow without hesitation.

The main focus was to get my son into fish. He was really on his game and landed many fish and some pretty darn decent sized fish. Here's a few photos of furry little bugger and some of his fish. This first fish had absolutely beautiful markings and spots. It was one of the prettiest fish of the day. 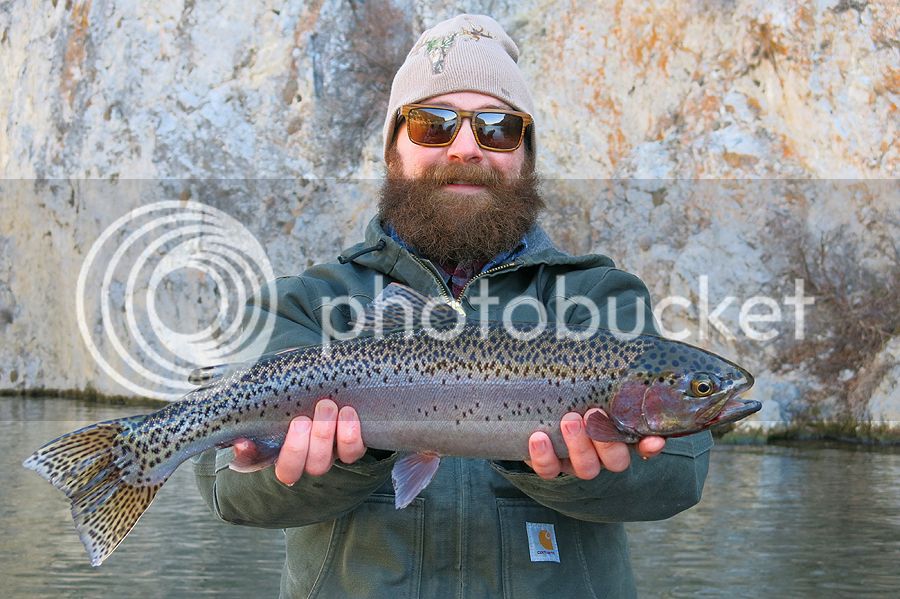 Here's a photo of my son with guide Trevor Johnson. As you will see the markings and coloration on the fish varied a ton between fish. 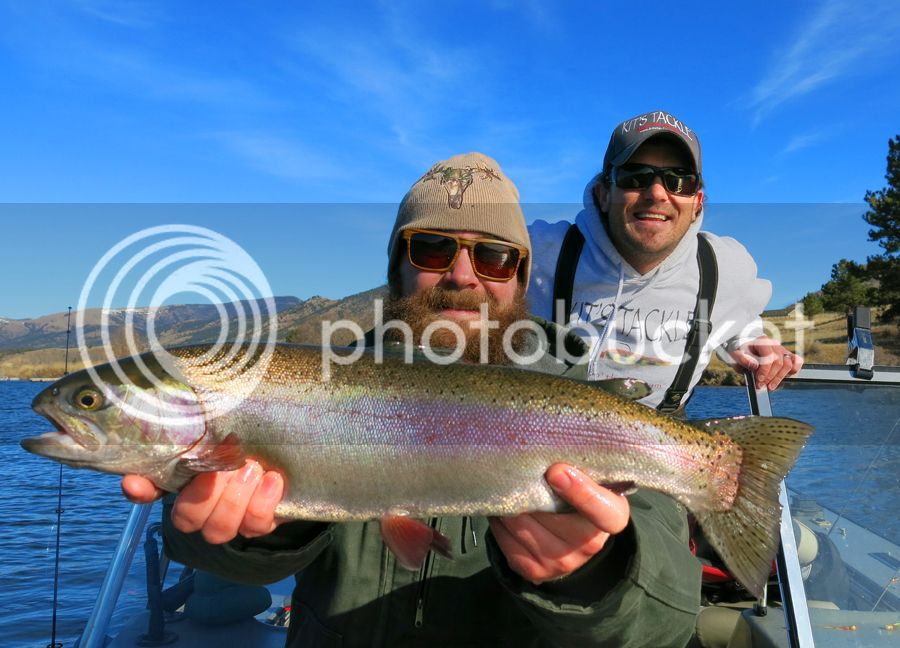 Like I said earlier we were glad Trevor and his dad were fishing right along beside us. Here's a really dark colored fish that Trevor landed. 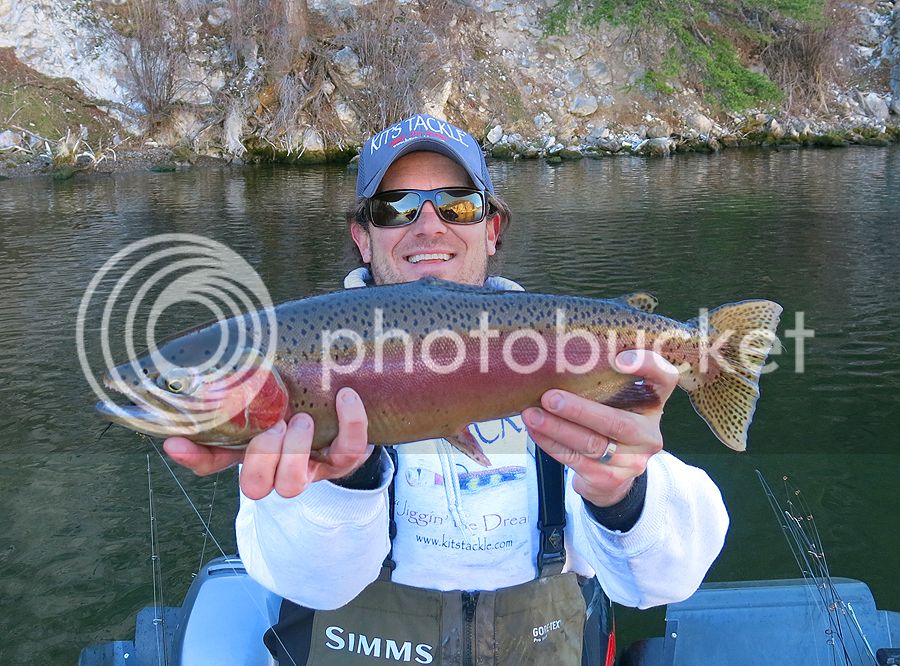 Not to be out done I managed to boat a few fish myownself, but spent most of my time taking photos of others. We caught so many big trout right around 20" or bigger we quit taking pics of anything smaller. I have a lot more photos but will limit this thread to just these as it gives a really good overview of what we experienced all day long. It was about as perfect of a day on the water as I've ever experienced! 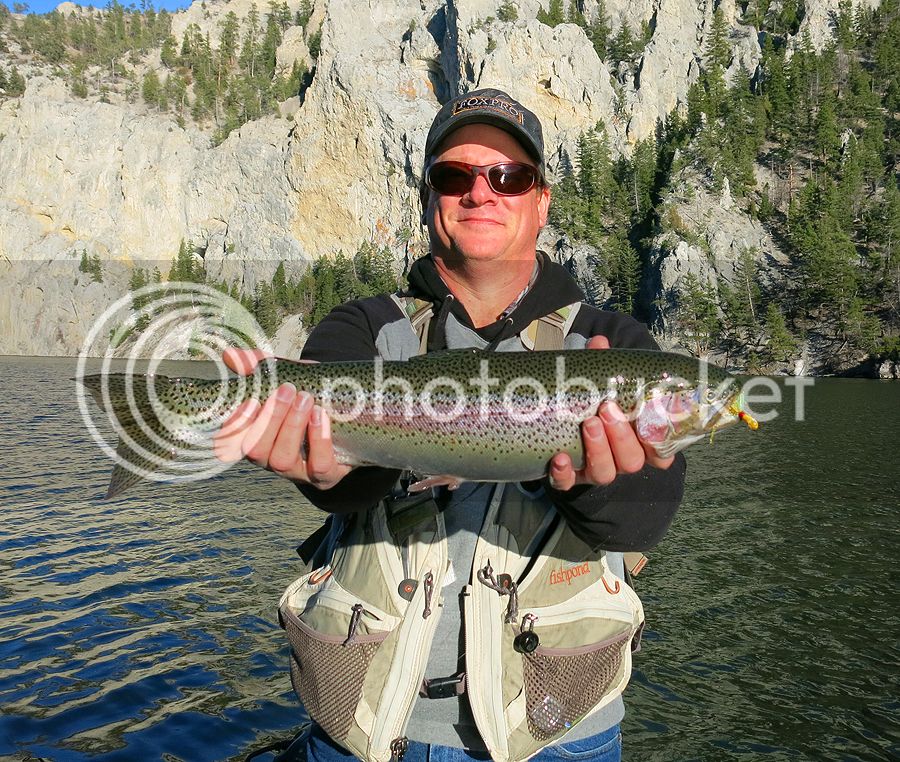 Your pictures never disappoint Troy! Beautiful fish from one of the neatest places in the state.
3

Location
Middle of the Midwest

Epic was the right description. Looks like a blast!

id like to learn more about this jig fishing, never ever done it or heard about it till seeing you do it,,,,,

Great fish. That spot is one of my favorites for consistent big fish... Unbelievable fishing at times.

Very nice fish for trout. If you gota catch trout they may as well be BIG trout.
Did you get in to any of the walleye ?
Crazy to be boat fishing in Feb and March, in Montana

Very cool. Love that area. Consistently produces highest rainbow averages for me this time of year.

It was "yesterday" for you gentlemen......as in you should have been here yesterday!! Even sweeter to do that with your son.

Awesome day and awesome fish. Thanks for sharing. Make me a bit homesick.
1

In my opinion you have a lot of epic fishing trips, that was certainly one! Great looking trout in those photos. I'm always jealous of your fish, and this is no exception, but now I've got beard envy too.
B

Coyotes-R-Us, we didn't fish for walleye though the guide had caught some there the week before. We actually could have caught even more trout than we did, but we spent a large part of the day trying for trophy brown trout. Anyone that has fished there knows it's a low percentage game for big browns, but if they do bite it's a big pay off. We didn't land any big browns but sure caught a lot of really nice rainbows while trying. I did not see any bears but did see some fresh bear scat when we pulled ashore for lunch. Believe me bears were on my mind.

Looks like an incredible day on the water, Great photos and Fish!

Awesome. Going to change the line on my spinning reel this week, so I'm ready to head to the high country.
B

Those fish are beautiful! You should get some repo's done.

Just got added to the "Places to hit and fish when retired and dragging RV around out west" list, in a few years hopefully.

John, I don't know if I'd go so far as to agree with that, but I will say that this trip ranks in the top 10 best fishing trips I've ever been involved with.
You must log in or register to reply here.