I came from Miami Beach Florida, to Alaska in 1977. Fished a lot in Fla. snook, sheepshead, others.
Salmon where different, but figured it out. 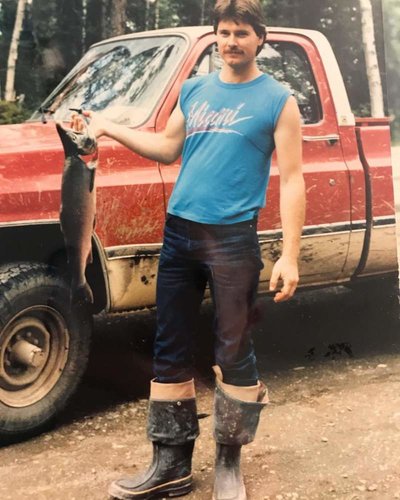 I graduated from high school in 1977. During my senior year it was a "veterinarian or Alaska". I choose a DVM career. You see my cousin was on Prince of Wales during the logging boom. He was a cook at a camp in Coffman Cove and he would tell the greatest stories. I love my DVM career, however, I often ask my self "what if". I have had the chance to Visit Coffman Cove twice and it is absolutely beautiful.

Great pic!! Thanks for sharing!

Early 80's. Rolling down the Parks hwy, big John packs his pipe with weed and says " I see better when I'm high" puffs a little smoke, toward Dave, who can't stand it. I'm driving. Immediately John says "there's a bear!". Pulled over to size him up. Small Grizzly. Dave wants it. He has a borrowed rifle never shot. John declares Dave and I must shoot the bear at the same time. Ok. This was done just off the road shoulder, both of us in a sitting position. John counts to three, kaboom. Bear flips growls, bites at his side, then goes paws up in the brush. Dave had his trophy. 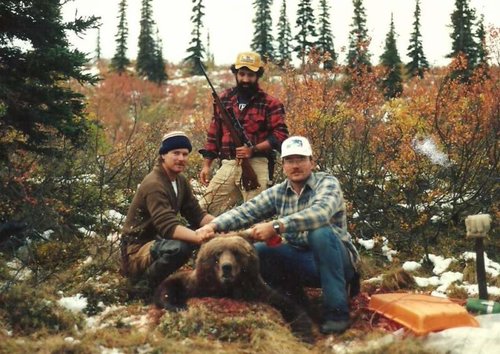 Hunted with John, a few years. In the eighties, would chain up the truck and hit the trails. The honda 3 wheeler was handy. I'd load a moose leg, heavy side on seat and leg through the handle bars. Bounce meat back to the truck, one leg at a time. 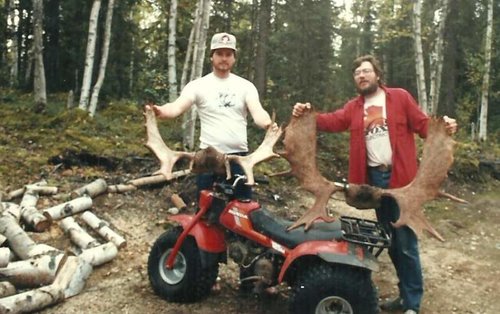 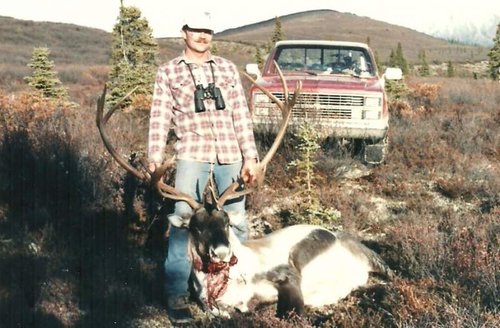 While a big moose is nice, we were meat hunters. In the 80's our areas were "any bull". Up north, legal was 36" spread or greater/ or 3 brow tines on one side.

Caribou above, John shot from passenger seat of my truck. Casings pinging around the cab. It was a good 200-220 yards. He hit it, and was out of bullets. Looked to me to be a done deal, but John insisted I put it down. Leaned across the hood, one shot and down it was. John says "I need to get me a scope". 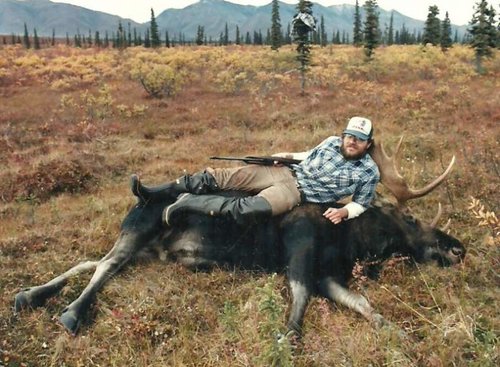 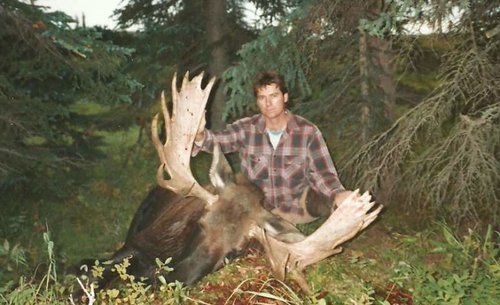 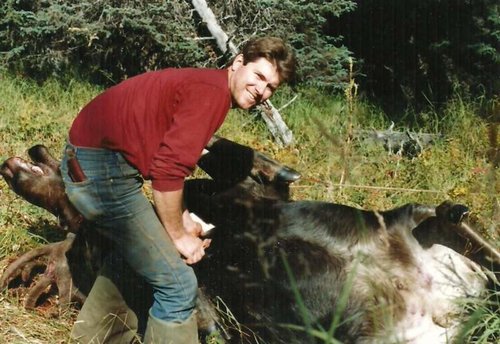 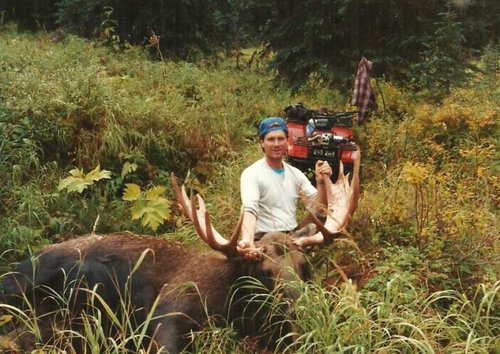 You must be typing this from the grave. No way you guys survived the Alaska wilderness in cotton shirts and blue jeans.

Cool pics! Thanks for sharing.
F

Gotta love those early pictures. Thanks for sharing.

We were more excited about chasing critters, than being cold. Young, and doing it cheap. I did, and still do, like wool in my clothes. In the 80's, these were "city moose", not to far from town. A few early camps pictures. 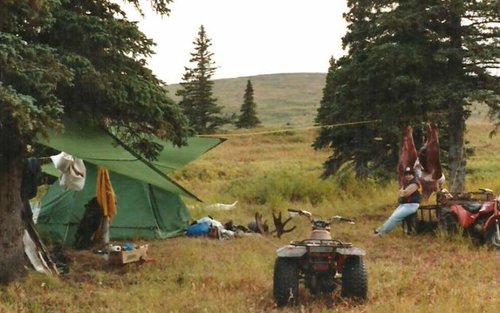 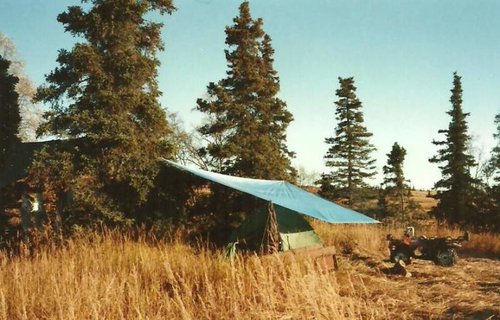 This is how we got it done. Nights are cold, sometimes snow collapses the camp!
Meat hanging in both pictures. Took a small black bear on that last one. 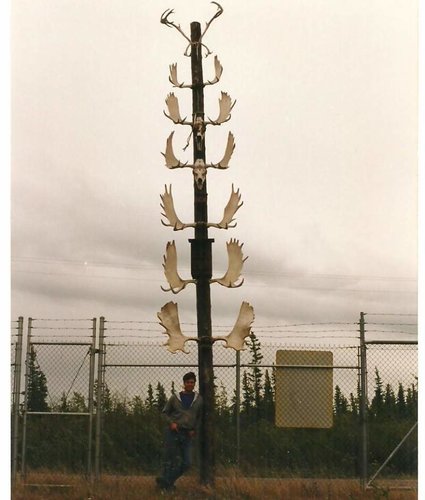 Awesome love the old pics nothing like them. Hunting was different back then not a fashion show like this day and age.

Bambistew said:
You must be typing this from the grave. No way you guys survived the Alaska wilderness in cotton shirts and blue jeans.

Wow! Who would have thought it was even possible to hunt and take animals like that without any overpriced camo and $500 boots.

I haven’t smoked weed in a long time and never shot a griz. I imagine the two go together nicely.
Sounds like the way to do it.

MTGomer said:
I haven’t smoked weed in a long time and never shot a griz. I imagine the two go together nicely.
Click to expand...

Another photo of John. Shoots a 308, open sites 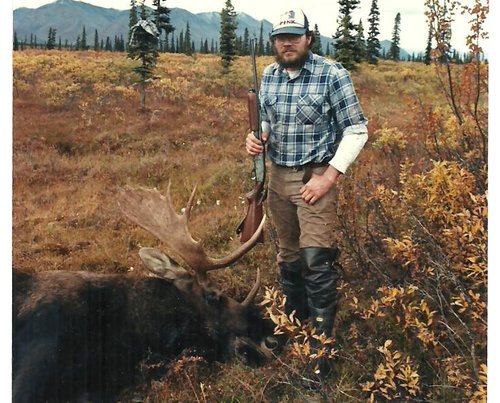 Friend Phil, was camping across a draw from my solo camp. I'm making lunch as he walks up and says "can I barrow your rifle". Takes aim with the 30-06 and drops this caribou about 120 yards from my camp. He tells me "keep an eye on the gut pile, I got a bear tag" 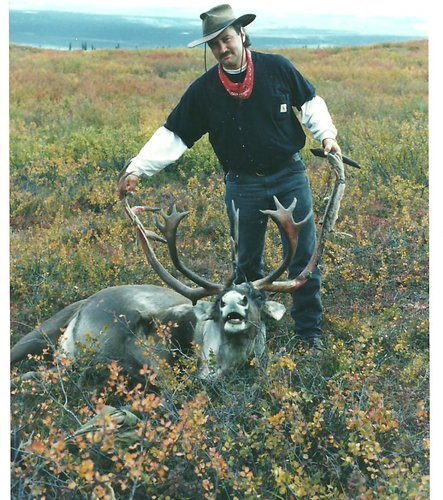 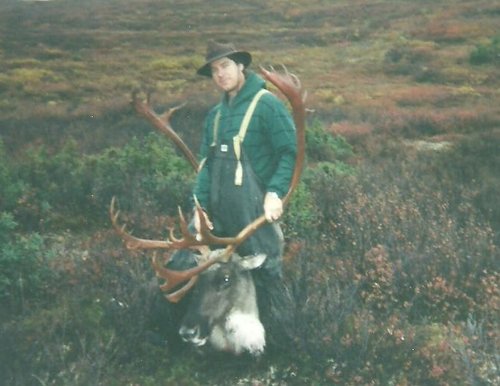 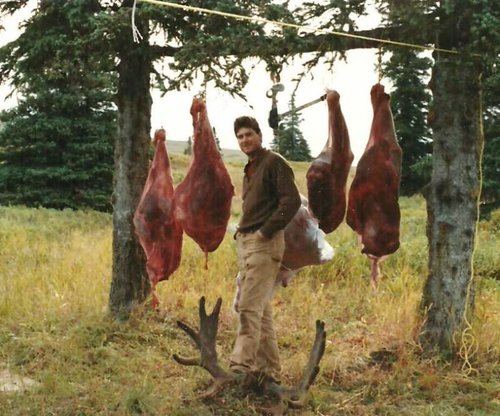 Mrs BearFoot
Back in the day 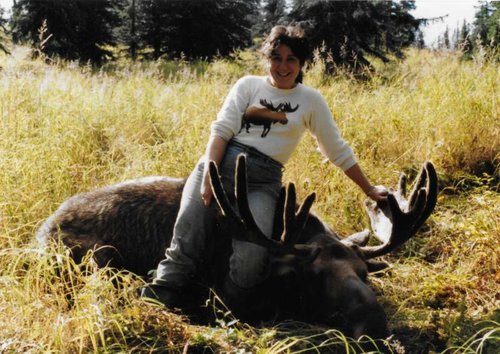 Fishing with the oldest 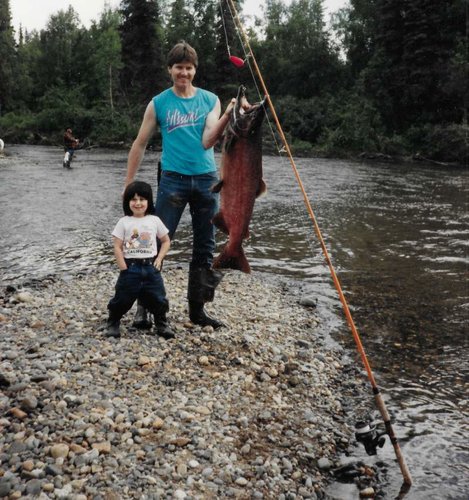 Living the dream for sure. Congrats.
D