I once again proved that I cant judge antelope that well.

I first saw the particular buck I was after in early September. I only saw him one time, but did get some video footage. I told a friend from Casper about the buck and that I thought it would "maybe go 80". I looked at the video a few times and each time I did, I just liked the buck more and more.

So, with my moose hunt conflicting with the pronghorn tag, there was very little I could do but hope that someone else was equally as poor at judging pronghorns and that I would find him.

My first available time to hunt was yesterday on my way home from an 8 day hitch at work. I knew I would only have a couple hours, but figured I would gamble and see if that buck I saw earlier was still around. On my way to the area, I saw a couple hunters from Nebraska leaving the area. It wasn't looking good.

I went to the spot where I had seen the buck over 20 days ago and started glassing. Within about 20 minutes I spotted him running around chasing other bucks and trying to keep 4 does rounded up. When he wasn't doing that, he was just constantly on the move.

I needed to get a better look, so gathered up my rifle and spotting scope and walked out to a higher ridge that he disappeared behind. I found him again, but he was moving away from me and was over a half mile away. Pretty soon, he starts moving back toward the ridge I was on. I got to watch him for a long time and the more I looked the more I liked what I was seeing.

He eventually sort of calmed down with only about 30 minutes of shooting light left. He started to feed a bit, and then bedded down! Facing away!

I really contemplated just leaving him as he was 703 yards away. But, I remembered many past experiences with pronghorn in lower light conditions toward evening. I don't know what it is, if their eyes deceive them at dusk or what, but I've essentially walked up pretty close to them in similar conditions.

I was torn, should I try and chance it or wait until the next morning? I figured with the amount of running around he did the hour before, I would take a chance and if the stalk went south, I'd just relocate him in the morning.

He was bedded facing away, so I just essentially walked right at him, in the wide open. At about 400 yards I finally dropped enough to get out of his sight. I covered the next section pretty fast and when I crawled up out of the draw I was in, he was still bedded and 259 yards away.

I looked a bit longer through the spotting scope and he still looked good. For some reason, he stood and then bedded again broadside to me. I looked again through the spotter at the mass of his horns as he was facing me.

Enough looking, time to get this antelope shot. I chambered a round in my 7-08 and used some tall sagebrush for a rest. I was shooting prone and again, for some unknown reason, he stood back up and started walking. I just placed the leupold dot behind his shoulder and pressed the trigger. I heard the bullet smack him and he went about 10 steps and fell behind some sagebrush.

I quickly went over and was a bit shocked by his size...for once shocked that I had almost for sure under-estimated the score.

Had to wait until this morning to take decent pictures: 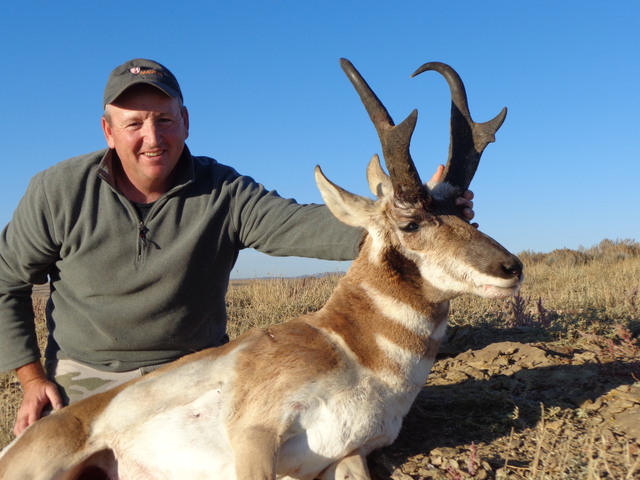 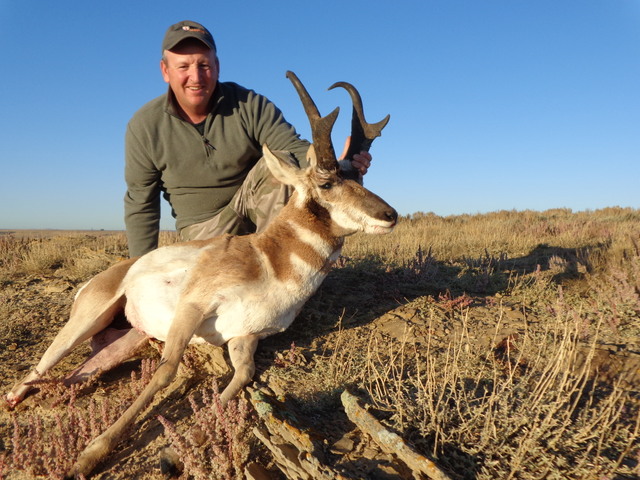 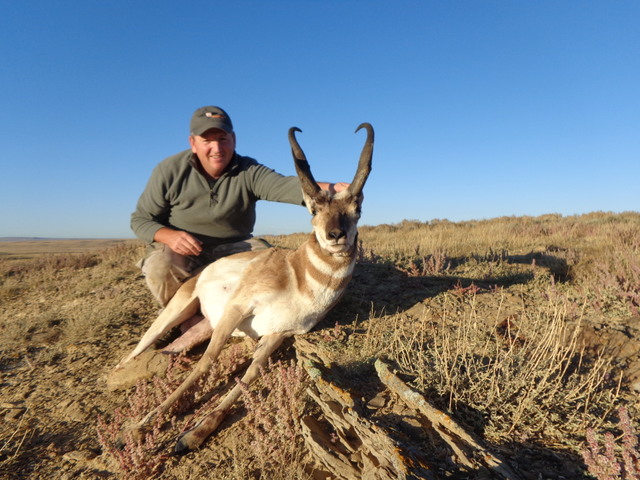 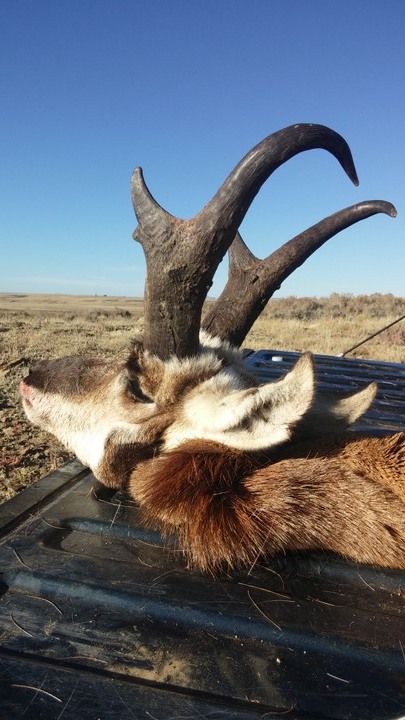 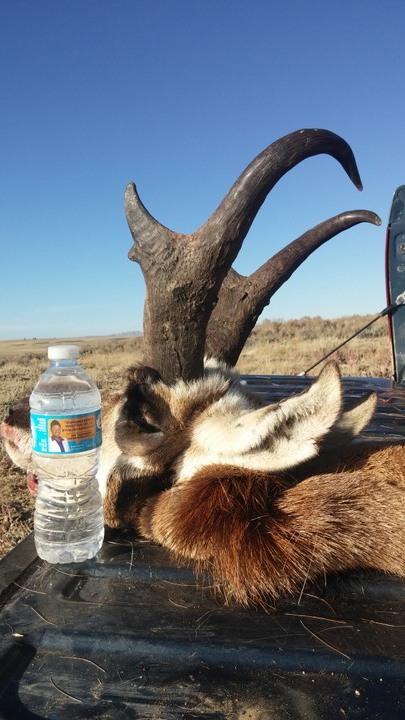 Nice antelope! I am pretty sure you can judge them better than me. I wish I had a job I could scout and hunt them after work.

Wow, the mass on that frontal view is impressive. That is maximizing a 2 hr season, congrats.

Green with envy on this keyboard. Great buck, Buzz. Congrats!

Dang that's a great looking buck! I really need to get back to Wyoming and chase them again

Damn Nebraskans! They should have killed him! Sooo, the 7-08 DOES work on big antelope. Great buck. What was the final tape on him?

Well done Buzz, you are having a great year!
B

I'm going to wait on the score until I have some time to sit down and do it right, but I'm confident he's over 82 net.

What a way to start the season, a dandy bull moose and now a great pronghorn. Way to go Buzz!

Got some thickness for sure, great looking lope Buzz, Congrats. Nice field shots!
You must log in or register to reply here.

Drove to Nevada and only saw 4 antelope