I drew my first WY bull moose tag with points in 2015 and shot a nice bull.

Was in the penalty box for 5 years and had 1 point going into 2022 and decided to apply for a permit in a different area that I've always wanted to hunt. I work that country quite a bit and usually see plenty of moose.

I pulled a random tag with horrific odds, my 3rd Shiras tag and second in Wyoming. A gift tag is what I called it, something you don't expect to draw but grateful when it happens.

After my bout with Covid in early Sept. and a trip to the hospital with blood clots in my lung and leg I thought about reserving my tag for the following year. I got in touch with the GF, got the paperwork and figured I'd wait and see how things went with the clots and all. I seemed to recover pretty quickly and with no certainties in life decided why wait? I figured worse case I could hobble around enough to find some kind of moose.

Made plans with my Dad and Brother and they couldnt get down to the area until noon on October 1.

I got down there on the 29th after tying up some work obligations and started scouting. I saw moose, some great bull elk (general area) including a nice 7x7, mule deer, pronghorn just a gob of game.

The evening prior to the opener I found some smaller bulls and some cows. The last half hour I decided to glass an area that I had not seen moose in but just looked right to me. I walked a short distance to a great glassing spot and saw nothing. With not much light left I thought I heard a bull call twice but with the light fading I couldn't glass him up.

Went back to the wall tent and tried to come up with a plan. Should I go to the areas I'd seen bulls and more importantly cows? Or should I try the spot I liked the looks of where I thought I heard the bull?

I figured with plenty of time to hunt and with wanting to meet my Dad and Brother I would try the closer spot where I thought I'd heard the bull.

Opening morning I get to the glassing spot and its still too dark to glass. As it gets light, I'm listening and glassing...nothing. After about a good 15 minutes of glassing I happen to glass between 2 aspen stands and see a bull moose heading to the upper aspen stand. I figure with nothing to lose, and the fact he was on private, I would just give a cow call and see what happens.

I call and much to my surprise, he stops, turns and looks directly at me. He then starts walking to the lower aspen patch. He gets through that patch of trees, into the open and still coming directly at me. I lose him in the willows but pick him up again in a small v shaped open spot, still coming. He goes through some more willows and eventually ends up on the bank of the creek, crosses the creek, still coming at this point he's 550 yards. Lose him in the willows and he breaks into the open sage at 302 yards still coming. He finally gets to just under 200 yards and turns enough to give me a shot behind the shoulder. Shot him with my 7 RM and 140 grain nosler e-tip. He starts moving to my right, shot him again behind the shoulder seeing the hair fly, one more shot for good measure and he disappears behind some willows.

I couldn't believe how quickly it happened and how he came to that single call from about a mile. I walked down to him and was very happy with the last bull moose I'll likely ever kill in Wyoming, sans drawing a tri-fecta or raffle tag.

I got to work and had it quartered and in game bags, all the trim meat off and bagged, and back to the truck with load #1 by 11:30 AM. Met Dad and Matt about an hour later and were done packing by 7:30 PM. 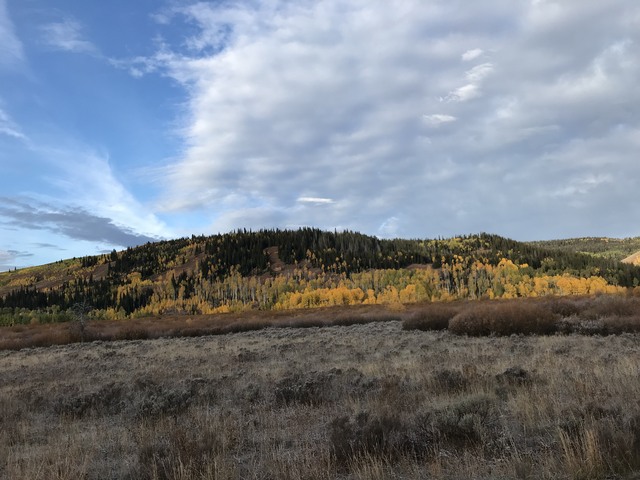 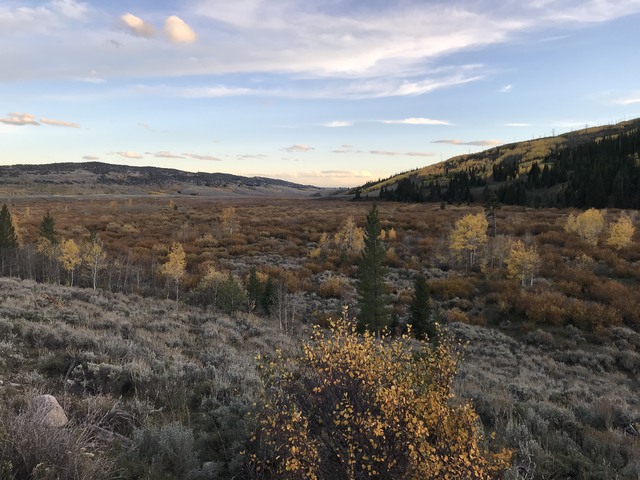 Crappy picture of the 7x7 bull that was bugling and carrying on with archery season still open in a general unit: 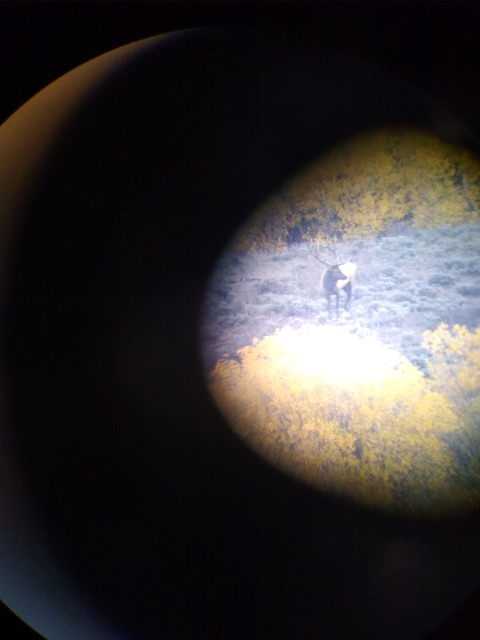 Picture of the where my bull came from, between the 2 aspen patches, crossed the river in the center of the picture and I shot it on the sage flat on the bottom of the picture. He died in the first stringer of willows on the right of the photo: 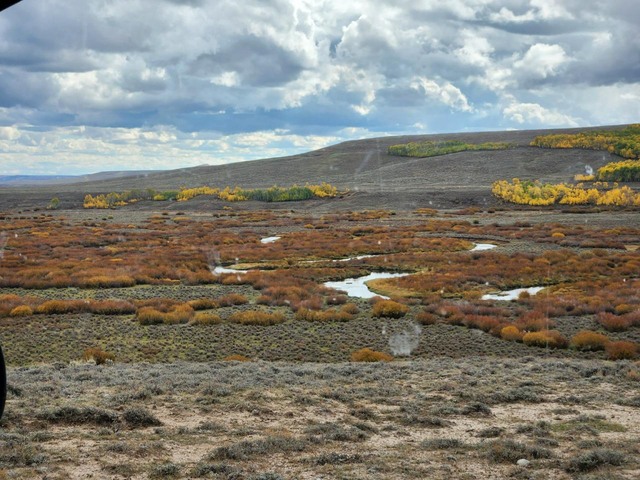 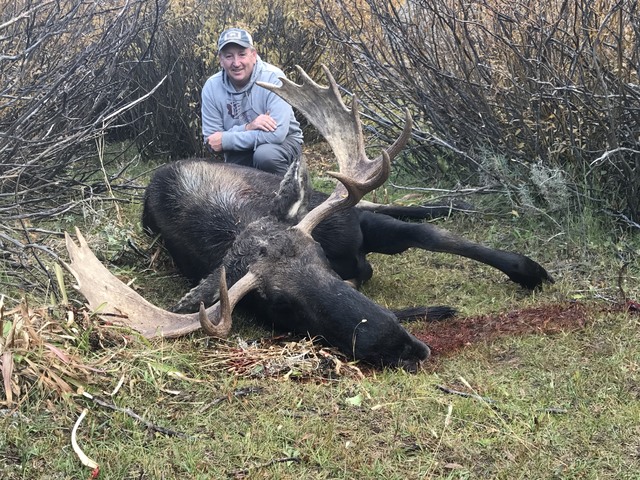 Great all around, nice bull.

Congrats on a beast!

Way to make the most of your fortunate drawing of the tag.

It is always amazing when you call (turkey, elk, deer, moose) and they respond to that call. Adds a crowning touch moment to the whole process.

JGDC Buzz. You are quite the killer. Helluva first day bull congrats on having the magic voice to draw him in.

@BuzzH Great job and wow!! Good moose for sure.

All kidding aside, congrats Buzz that’s a great looking bull.

Congrats! Always impressed with how you get hunts done.

I heard through the grapevine that you had a moose tag nearby to where I was doing some elk hunting in Sept. Being in that area makes me want to start buying WY moose points even if it will be a crapshoot.
T

What an awesome bull and hunt!

At this rate Moosie better watch his step.....