My hunt started out like all others, anticipation of what we’d see, and trepidation of who we may run into, or how much country we’d have to ourselves (if any).

We covered our first canyon the day before the opener and opening morning before opting to check out new country. Sheep were non-existent in drainage one. Later that day we found a group of rams in the next canyon. The problem was they were way high in the cliffs. We (I) considered that they would have to come down sooner or later, so I convinced Wyodeerhunter (banned) that we should see what happens this evening, and into the morning, and see if they would come down. 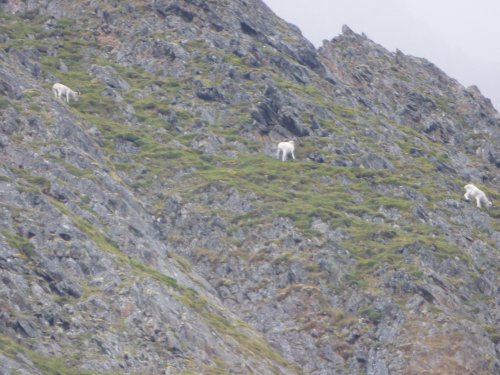 At some point during the evening/night half the rams left, leaving only one legal ram, and he was still at the top of the mountain. We packed up camp and headed up further into the drainage after attempting to gain some altitude and close the distance on the rams. The terrain got way too steep, too fast, no way to get closer. As we were sitting in a cliff, we kept hearing rocks rolling, but couldn’t see what was making them move. At that point we spotted a wolverine sneaking up the hill, a mere 20 yards away. I was thinking back, this makes about my 23rd wolverine I've seen over the years. 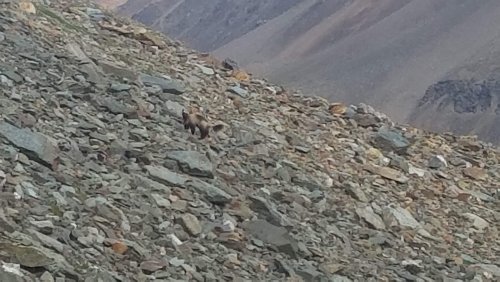 Later that evening we located another band of rams, one was a standout from the rest, he had a big drop, and looked decently heavy. There also appeared to be a broomed ram hanging a few hundred yards away from the main band. We weren’t sure if it was the one that disappeared the evening before down below, but either way it was nice to have animals to chase.

I don’t like hunting this canyon for several reasons. One its wide open, the rams like to bed at the head end and can see you approach from miles off as you walk up the bottom. Two... the wind almost always blows up the canyon. It’s a frustrating spot... You are either seen or smelled. This year proved no different. 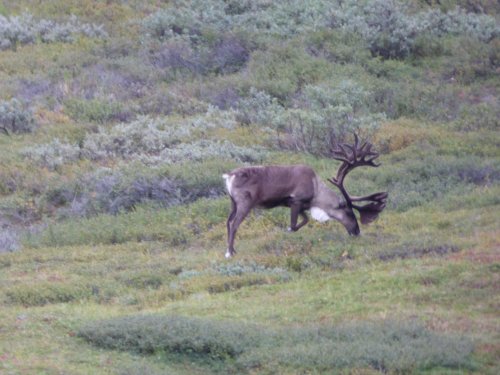 As darkness neared, the rams had moved down valley and were out feeding in a vulnerable spot, that allowed us to approach unseen, for the most part. We waited for the sun to set (pushing 10pm) and thermals to calm down/switch before we made the last mile approach. As we neared 800 ish yards, the wind switched and blew out scent directly at them. They didn't hang around and bugged out heading for the far reaches of the canyon, while gaining lots of elevation in the meantime. We watched them go as high and as deep as they could go, until losing sight, and darkness descended.

We returned to camp, totally discouraged. I’ve seen this exact scenario, in this exact spot play out a few times in the past. In my mind those rams were gone, at best they may come back in a few days, at worst, they were in the adjacent drainage, 10 miles from where we stood… then we’d have to find them. I usually don't give up when shit like this happens, but the situation sucked... Killable rams are non-existent for the near future, or so it seemed. You usually don’t get a second chance in a week-long hunt.

I had a terrible night’s sleep thinking about the day before, and what the plan would be for the following. Thinking about the weather that was rolling in, the lack of sheep, and about my family, etc…

Wyodeerhunter (banned) got up at day break and spotted the rams at the extreme end of the valley, some 2 miles off. Would they come down, or would they leave once it got a bit more light out? That was the question… He convinced me they were going to come down as they kept looking below them at the lush grass. They had to be hungry, no dinner the evening before, and it was breakfast time.

I drug my ass out of bed but felt awful, like I had a hangover. I wasn't sure if I was getting sick or what... I had zero energy but knew if we were going to make this happen, I would have to dig deep and not give up. Time was ticking to get up there before the wind got us. It was a bluebird day, it would be hot, and the thermals would switch shortly. Conditions were not ideal, but we had nothing to lose at this point.

Two hours later we were at their level, but had a small ridge to conceal our movement as we made the final approach. Once we made it to about 600 yards, we were spotted by a couple younger rams who had moved higher on the hill as they fed up. Wyo stayed back distracting them, and I slipped back and down into a cut and snuck into range.

We figured the other rams would be with the small rams somewhere nearby. It worked out perfectly. I ascended another 300 yards and belly-crawled the last 5 yards to a ridgeline, careful not to silhouette myself. Slightly below and ahead were the 3 small rams… and below them feeding about a 100 yards to the right were 3 others including what looked to be a mature legal ram. I wasn’t 100% sure it was the big ram we'd seen the day before. Looking at the rams through my binos at 400 yards, I was having a hard time convincing myself the bigger ram was the same one as the night before, but I knew he was legal. I watched for a couple minutes as he fed, then he finally turned his head and looked my direction. This angle removed all doubt. I waited for him to clear the other two rams. The shot was going to be a fair poke, but conditions were perfect, and I was solid. The shot rang out and he was down. 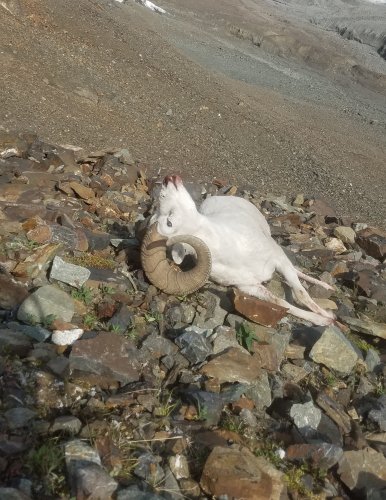 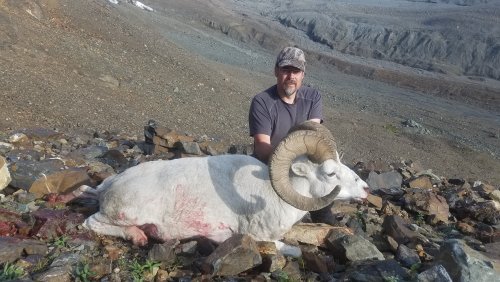 Wyodeerhunter(banned) made his way up to me about 5 min later. We discussed what happened and then pondered what happened to the lone ram (not with the group of 6) we'd seen on the hike up. We were sure he’d gone over the ridge right where we stood. We could see most of the valley below and around us, and he was nowhere to be seen. We didn’t get a good look at him, but his body posture suggested he was a mature ram. About that time, Wyodeerhunter(banned) spotted him feed out from behind a small hillock below us about 300 yards. The scramble was on, reloading the rifle, digging out more bullets, ranging, finding a rest… After a few tense moments we had 2 rams on the ground...

We loaded up the rams and headed back to camp. We took a break, before packing up camp and marching back to the extraction point, getting there around midnight. 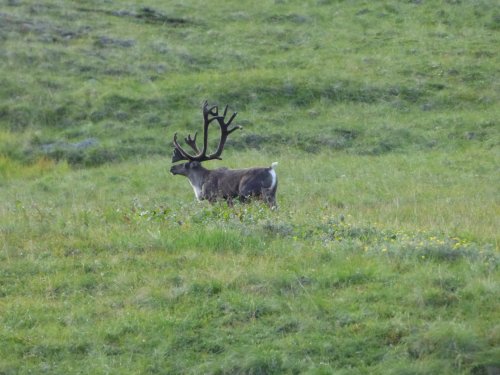 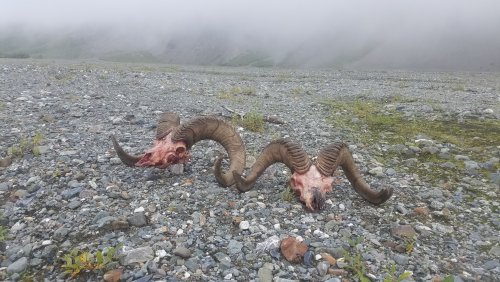 I have no idea why I am incredibly lucky, but whatever it is, I will continue to ride this train until it runs out of coal.

You would think repetition would get boring....not when it comes to Bambi's sheep hunts. Congrats to you and Banned!

Awesome! Sounds like it worked out picture perfect.
F

Congrats to the two of you on those beautiful rams ! Bambi, you definitely have those white sheep figured out and I am very envious .

Good thing you passed on that caribou! Awesome stuff, as always. Congratulations to you and (banned).
C

Great write up and amazing Rams! Congrats to both of you!

Just curious. Why is WYO banned?

cahunter805 said:
Great write up and amazing Rams! Congrats to both of you!

Just curious. Why is WYO banned?
Click to expand...

Posting to often under the influence of liquid that inspires tent pops.

Congratulations on a great hunt guys..
A

Gerald Martin said:
Posting to often under the influence of liquid that inspires tent pops.

Congratulations on a great hunt guys..
Click to expand...

If wyodeerhunter is who I think he is his banishment from this website was due to calling out the hypocritical rhetoric of a disabled vet that spews word vomit on this message board.
Last edited: Aug 22, 2019


If wyodeerhunter is who I think he is his banishment from this website was due to calling out the hypocritical rhetoric of a disabled vet that spews word vomit on this message board.
Click to expand...

What vet would that be? Most of us are pretty cool.

Wow, great rams in beautiful country. Congrats to both of you.

Awesome pics and write up! Thanks for sharing. Congrats and way to push through the discouragement and seal the deal
T

congrats and thanks for the wright up; I seem to find that the harder I work, the luckier I get - same for you Im sure

You're living the good life, dude!! Great write up!

Tough to top that kind of hunt...nicely done, great pictures and story. Congratulations!