Made the annual trip up to north Louisiana to get a head start on gun season for the primitive season opener. Unfortunately a few buddies I normally hunt with up there couldn't make it so I was on my own. I drove up the Friday night before season opened, and slept in the truck. At day break Saturday morning I began dragging my pirogue through the woods to get to the bayou. Since hurricane Laura the woods are a mess and I'd much rather drag it through when I can see. I know from histroy in this area there are a LOT of pigs, and the sign I saw suggested just that as well this season. I crossed the bayou and officially started my hunt. It felt amazing to be slowly slipping through those woods again.

My destination was a small ridge where the season before I had bumped a few deer bedded down. I planned to quietly slip in there and hope for the best. One the way there I bumped a deer, assumingly a doe. I looked at onx to mark that spot and noticed I had marked that exact same spot the year before when I bumped a deer. I continued along my path and looking for pigs along the way but didn't see any. When I arrived there was a fresh rub and I felt good about sitting here. My morning hunt would play out a few feet off the ground on a log from a tree that had half way blown over. I normally shoot left handed, but with more thick cover to my right and almost no cover to my left, I held my gun sitting prepared for a right handed shot.

About an hour later I heard movement that I had wrote off in my head as a squirrel. When I turned I first saw a flash of grey on the ground and realized it was legs. The young buck was inside the 20yds with a path coming right at me but just behind my back, and I needed to make a left handed shot. I tried to swap the gun over, but he caught movement. After a few seconds of a mexican standoff with him stomping his leg, he and another deer took off. I was really kicking myself and kept my gun in my lap for a left handed shot if I was lucky enough for another to come. Maybe 10 minutes later I hear movement behind me to the left and immediately recognize it to be a larger animal. It was a young doe. Again I had to swap the gun over and ready for a right handed shot. She gave me a break to swap the gun, raise the gun, and at the next hole "meh" and she dropped. It was a very short hunt with a lot of excitement in a short time that came to a quick end. A few texts and a couple photos and I started quartering the doe. 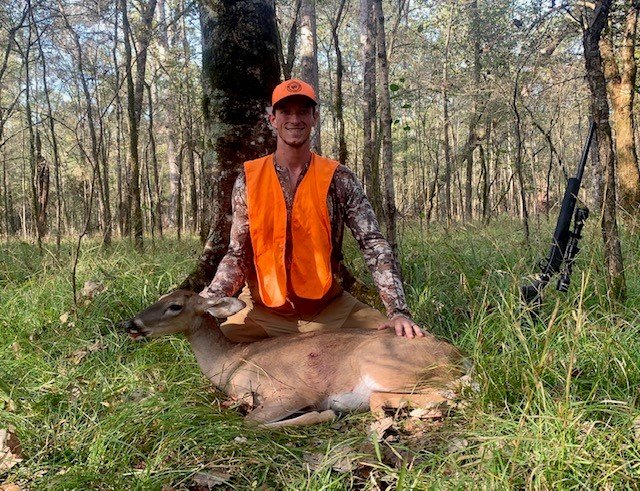 I've learned from past experiences that in daylight while quartering it's a good idea to keep the gun loaded and close. Sure enough this time was no different. I was almost through with the doe when I heard movement. Looked up to see a big black hog moving through. I grabbed the gun and tried to stop him but he didn't hear me. Took a center shoulder shot and immediately didn't see anything. Shooting a 35 wheelen H&R handi rifle it's impossible to stay on target. Reloaded a bloody round in the chamber, and walked over to find him on the ground dead. After more quartering and fully dulling 1 of my 2 knives, I had a HEAVY pack to bring back to the pirogue. 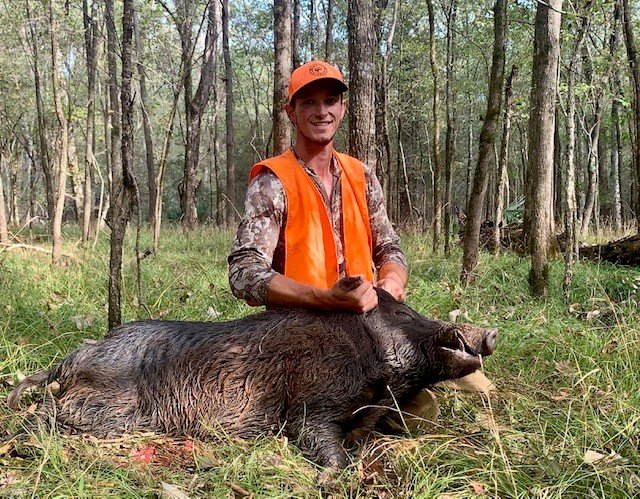 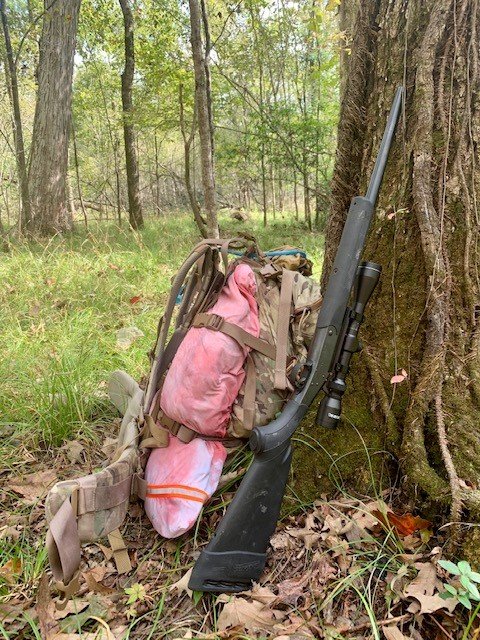 You can only kill one deer a day here, so I spent the rest of the day scouting new to me areas with my .17hmr (small game hunting) incase I found more pigs. Found some really good plan B areas that I hope to hunt some time this season. The following morning I hunted the same area. I had left the pirogue at the bayou the day before and planned to climb up a good tree at day break. On the way there I walked up on some pigs in the dark. With only a few more minutes until day break I decided to hold there and try to kill one. I could hear them cutting up among each other and popping acorns as the glutens fed. The pig one the day before as absolutely full of acorns. While there I was constantly checking the wind. And sure enough when the chalk went in the direction of the pigs, they took off in a continued down wind path. I sat that morning with no luck and scouted that area until the afternoon when it was time to go on.

Overall a great trip. Brought a lot of meat home, and learn a lot more how both the deer and pigs use these woods. Now I will say this....... I have probably eating more wild pig meat than most people I know. This was the second largest boar hog I have killed. The biggest one was delicious. Killed in almost the same spot last November. I have never had a bad tasting one until this one. Currently I have eaten almost all the backstraps and froze the remaining backstrap, with only some slight off taste at the worse. The back legs didn't smell too bad. I'll grind to use for foods with strong flavors like chilli, and hopefully it's ok. I had to throw the front shoulders out. I can't figure why its bad but it just was. The first day or two in the fridge all the meat had an almost gut smell. There was zero gut contamination on any of the pig. But when I got to the shoulders on day 6 it smelled like balls after going without a shower for a week. I had to send it to the buzzards. And before anyone says I did something to contaminate the meat.... The deer was a hard quartering away shot that went through gut, and was exposed to warm temps longer because I had to work on the pig. They were placed into separate game bags, went into the same cooler, and went into the fridge at the same time. The day I discarded the shoulders was the same day I put the last of the deer in the freeze. There deer was perfectly fine, but that hog just had something else going on.

Sounds like you had a great trip. Congrats on putting meat in the freezer.

Side Note: Love your choice of cartridges, love the 35W!

Mtnhunter1 said:
Sounds like you had a great trip. Congrats on putting meat in the freezer.

Side Note: Love your choice of cartridges, love the 35W!
Click to expand...

I shot a boar in Oklahoma about 10 years ago. The backstraps were good. The rest I ground up leaving half just as ground and the other half I mixed breakfast sausage seasoning with it. Didn't matter wich one I ate I would get one pound that was great but sometimes one pound would just stink like hell when I cooked it. I never understood why.

duckhunt said:
I shot a boar in Oklahoma about 10 years ago. The backstraps were good. The rest I ground up leaving half just as ground and the other half I mixed breakfast sausage seasoning with it. Didn't matter wich one I ate I would get one pound that was great but sometimes one pound would just stink like hell when I cooked it. I never understood why.
Click to expand...

Given the amount of meat and quality of it, it would make good sausage on its own, but I really hate to go through that work just to have tainted meat. It'll definitely be the last thing I put through the grinder just in case. The shoulders were so bad I tried trimming some off and getting to unexposed meat, but would have to wash my knife and hands between cuts. It really is disappointing. The first thing that registered in my head when I saw it was "thats a lot of meat"
You must log in or register to reply here.