This past 8 days in Wyoming has been something else weather wise.

My initial plans fell apart due to a few inches of snow and some brutal winds that we've experienced. I know, Wyoming gets wind, but then there is what we've had just lately.

I was weathered in for a couple days with no way to leave Laramie but finally got a break when the roads opened.

The first day of hunting, the wind was horrible all day, just like it had been the past week. I would have to guess 40 MPH sustained with gusts that nearly knocked a person off balance.

The elk weren't terribly hard to find as they were seeking places to get out of the wind as well. We glassed up a bunch of bulls, mostly on private but eventually found 5 on public. They were bedded at first, but I believe I got a bit too close with the truck (a short mile) and they got up and made their way around a ridge into some timber.

We waited until they were out of sight and hiked up to where they were. We cut their tracks and followed them until they went back onto private, never seeing them again.

We hiked back and with time left decided we would glass some private that we were told we could access to see what was around. Found 3 real nice bulls but squarely in the center of private. Next we glassed up a group of 9 bulls on the private we could have possibly hunted. Moved again, found another half dozen bulls.

Decided to move again as it was getting on to the last 30 minutes of shooting light. On the way down, I looked down in a draw, and saw 5 bulls feeding...on public land.

Aiden gathered up his rifle, and we made our move. Of the 5 bulls all were 5 and 6 points with the best three all the same age class bulls. The 2 six points were both busted, one missing the 5th and 6th on the passenger side, the other missing points on both sides. Aiden decided to take the 5 point that wasn't missing anything.

The bull was 127 yards and eventually fed broadside. He was rested over my pack, prone and I told him, "right behind the shoulder". Luckily he was close and shooting directly into the wind. At the shot, the bull collapsed and that was that. The 120 grain nosler ballistic tip from his 7-08 broke the spine and exited about mid body on the off-side as the shot was pretty steep downhill.

One happy elk hunter with his first bull. 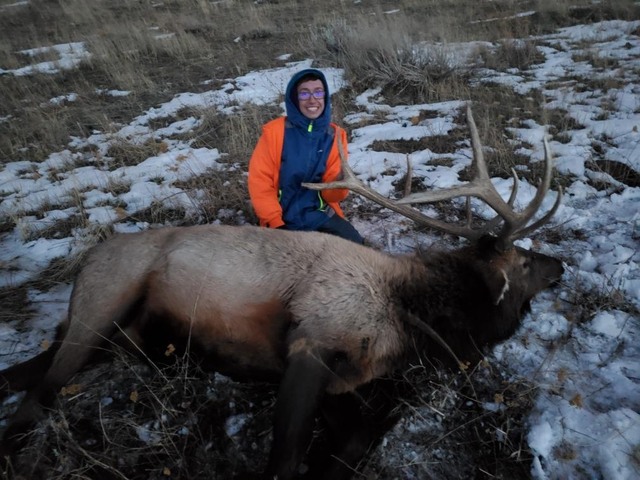 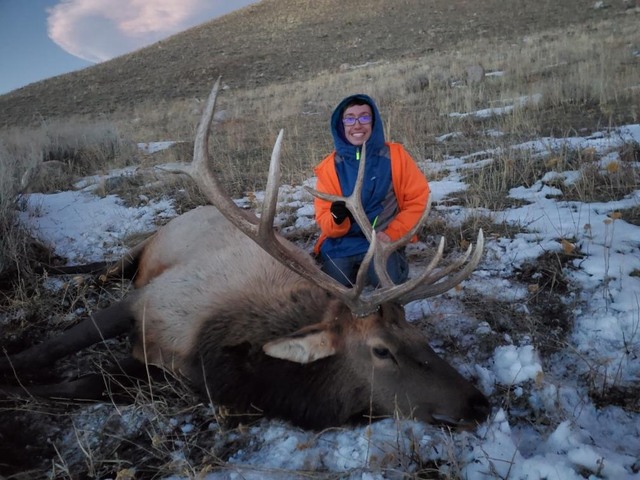 Congrats. Wind in Wyoming?
B

There's wind...and then there was this last 10 day stretch.

Even by Wyoming standards, it was brutal.

Congrats, that's a heck of a first bull!

BuzzH said:
There's wind...and then there was this last 10 day stretch.

Even by Wyoming standards, it was brutal.
Click to expand...

Drove back from Laramie on the 5th after a weekend of little kid hockey. Counted 10 semis blown over. Even for Arlington that's a lot.

mulecreek said:
Drove back from Laramie on the 5th after a weekend of little kid hockey. Counted 10 semis blown over. Even for Arlington that's a lot.
Click to expand...

that'll keep the Californians out.

Love that he got to get comfortable and choose the bull he wanted. That's great. Also, I like his choice

neffa3 said:
that'll keep the Californians out.
Click to expand...

Elk hunting in WY in December is a good way to turn someone into an archery hunter. Nice job, all!

Congrats to the young hunter!

The wind lately has been worse than I've seen it before. Even for our SW MT valley that is known for wind.

Awesome first bull and cool that he got to look over so many before making his choice. Congrats!

Awesome bull! Congrats to both of you on the success.
K

Great bull. Was this the nephew that you were looking at a Tikka T3 in 7-08 for? If so, I'm assuming that he's happy with it.
B

awesome again Buzz! thanks for sharing with us all.