Went with Wayne Bilings. The owner of WB Guide Service and his fantastic hounds. We treed this Tom after about four hours. He weighed 170 lbs on a certified scale. He was 8' 3" from the tip of his nose to the end of this tail. The skull green scores 14 13/16 points.

Here's a picture of the cat in the Cottonwood prior to the shot.

This is a picture of one of Wayne's hounds up the tree. He is just below the branch the cougar is on. 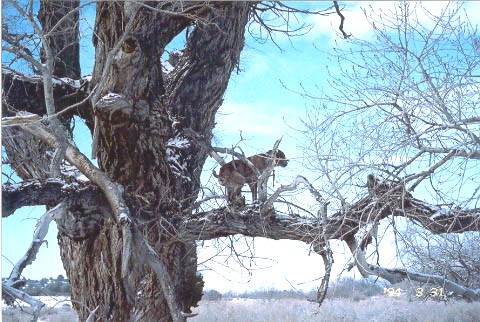 Well, this was the end of the line of the old Tom! 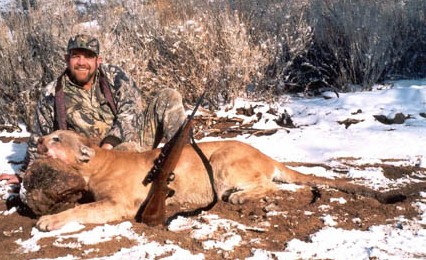 Pretty amazing, a dog going up a tree. You got a great trophy cat there, congratulations!
R

Very nice trophy! We have quite a few of those "big kitties" up in this corner of the state as well. A friend at work showed me a snapshot of one he and some friends took a few weeks ago up in the Carson Nat'l Forest. It was a nice one, but not nearly as nice as the one you took.

I am told the cats up in your area get larger than those down here do. I don't know that for a fact. I do know that the world record was killed in Colorado by Teddy Roosevelt and there are more B&C entries from N. New Mexico than this area. From all reports, this one is pretty huge for this area. Again, I am no expert on Cougars. That's why I had to use an Outfitter. All I really know for sure is that I am one happy cat-killer right now!
J

Gila, man that is a dandy.Sounds like the trip of a lifetime, I have been wanting a cat for several years now and you story doesn't help the budget.
T

Maybe I'm wrong about this but I thought someone told me that the world record Teddy Roosevelt lion from Colorado has since been replaced by a lion from up north, British Columbia or Alberta or somewhere up in Canada.

I could be wrong but I believe the new world record is now from up north. And you are right, as a general rule the lions up north, from Idaho north are generally a bit bigger than the lions of the SW country.

I know at a recent hunting Expo they had some lions killed in British Columbia and these toms were much bigger than anything we catch around her in Utah. They were PIGS!!! Absolute giants.

But regardless, that's a nice cat you harvested. Congratulations!!!
R

Awesome! Thanks for posting the picture. Id sure like to hear the story.

Awesome cat! Gila [once in a lifetime] for most of us.
T

Good looking cat you got there.
G

HoundDawg, you probably know more about the big cats than I do. I hadn't heard that Teddy's cat had been bettered, but I don't hear a lot of things until I've already opened my mouth and then find out I have my story wrong.. LOL
I'm good at that!
I saw a picture of that cat of Teddy Roosevelt's. It was so large it didn't even look right. Really!
I don't remember what that cat weighed or even if they mentioned what it weighed, but it was a LOT heavier than mine. It was awsome!
You must log in or register to reply here.