Location
Banks of the Big Muddy

I won't be heading west to hunt this year, instead I decided to take my son bear hunting in West Virginia. My wife caught wind of my plans and decided that we hadn't been on a vacation for a couple of years and her and my daughter should go with. I have friends who run hounds in WV and tried to line it up so we could stay with them and hunt in the northern part of the state. My schedule wouldn't allow it so we decided to hunt in the southern part of the state a couple of weeks later. Trying to keep things on the cheap side, since my wife has been under partial furlough and I'm still trying to make up for lack of business this spring, we decided to camp at the state park next door to the WMA we'd be hunting. Some of the guys we were hunting with would be staying in the campground as well.

Friday afternoon we rolled in and set up camp and spent the evening getting re-acquainted with folks I hadn't seen in a couple of years.

You know you're serious about running hounds when you do this to a Grand Cherokee.

Opening morning we were pulled off of a gravel road in the WMA before dawn, watering the dogs and getting them shackled in place on the vehicles.

The dog with the best nose gets to ride up front. 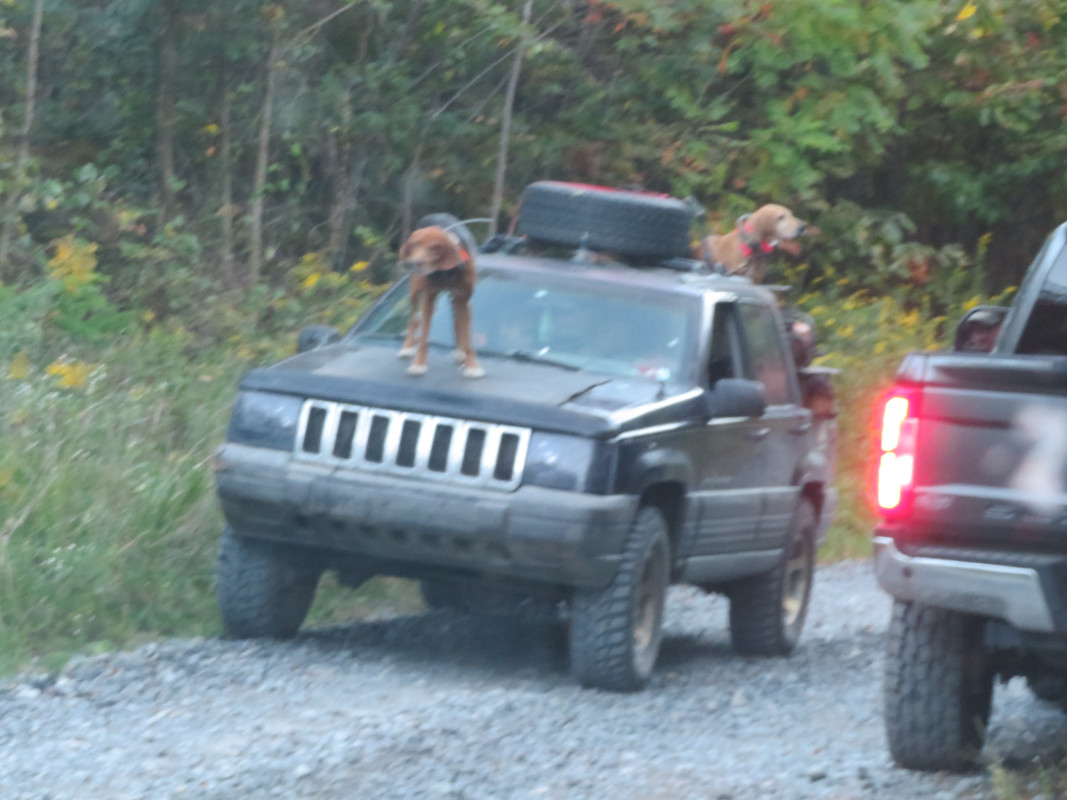 The roads are rigged first, if the dogs don't hit some of the younger guys will take a few on leads and walk the closed logging roads to find fresh scent. Then the hounds are turned loose to chase. Other hunters try to get more dogs on the trail. This is all coordinated by radio and GPS. Ideally the bear will run for a while then climb a tree (not too far from a road). The folks we were following didn't hit any scent on the road but according to the radio chatter two other bears were being chased. A while later we went to find "D", an old friend of mine, on the south road so we took off to meet with him. By the time we found D he said they had one treed and to follow him. More bouncing around down backroads in the pickup took us to the stream we crossed on the way in.

A quarter mile down a logging road and a short hike uphill and my wife and son got a look at their first wild black bear. It was high in the tree and it looked like a decent sized bear. I was a little apprehensive about shooting this one, never swing at your first pitch and all of that, but there was another saying that I generally stick to when hunting. Capstick said; "When mother nature throws you a bone, you don't kick sand in her face."

We found a tree to rest the rifle on with a good view of the bear and got my son lined up. D told him to aim square between the eyes. He was shooting a 7mm-08 Steyr and 120gr Sierra hand loads. At the shot the bear barely moved but the blood showering out of his head like a firehose had been turned on told us the shot was true. Everyone held their breath wondering if it was going to be stuck 30 feet up in a tree. A few moments later reflexes caused the bear to kick itself out of the tree.

The good news was that the bear was bigger than he looked. It was a boar and, while not too long, was built like a barrel with a large head. 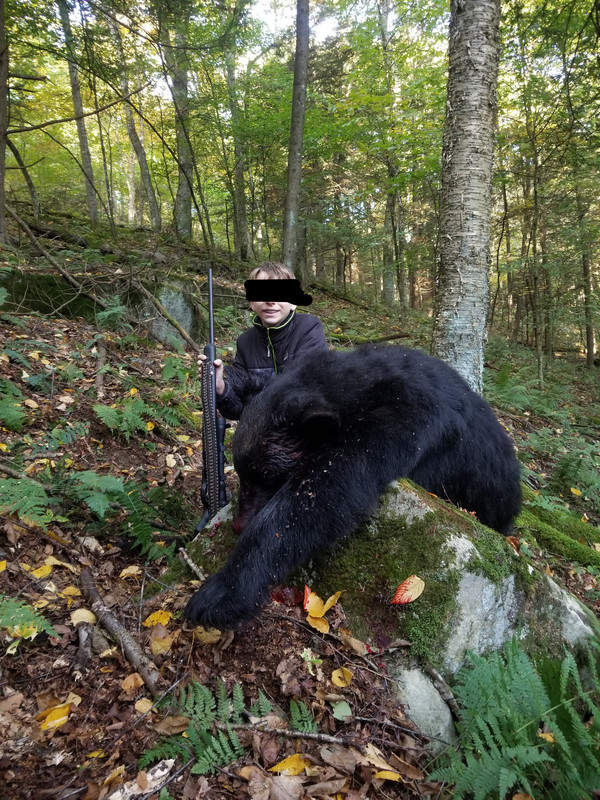 Once the bear is down the dogs are rewarded for there efforts. Each one gets to chomp into the bear a bit. 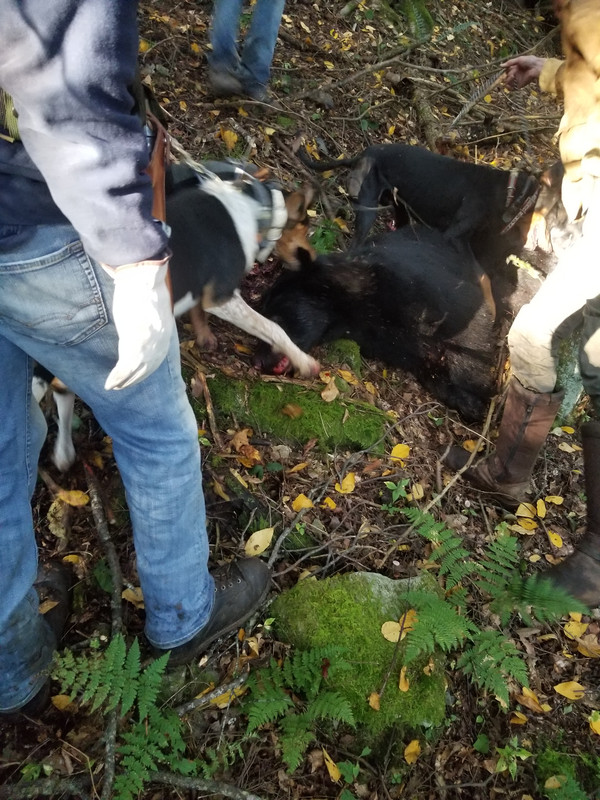 With several young guys (and a couple of older ones) it was a pretty easy drag out to the road. The scale hit 260lbs before the branch broke. We're calling it 260 but it was a little north of there. Larger than anyone guessed, and the guys I hunt with have been in on the killing of hundreds of bears.

We dropped the bear on the bank of the stream and got to work butchering. We weren't too far from the state park and a couple and their 2-3 year old daughter came walking down the logging trail next to the stream as we were working on the bear. Of course I'm enough of a redneck to call out "You can come see the bear if you want." The little girl was beelining for us and mom had to catch up to her to stop her and said "No thanks." City folk...

Turns out it was a good thing my son shot the bear he did as he probably wouldn't have gotten a chance at another one. A small bear was treed and let go that day and another was chased into a hole. The WMA's manager was with the group that had the bear holed up, his 10 year old daughter was going to try to get her first bear. They pulled the hounds out of the rocks to get the bear to run again and try to tree it for a less risky shot. It wouldn't tree though and crawled into a cave so deep that the dogs couldn't be heard. Once the dogs were retrieved the bear wouldn't come out.

The next day a good one bayed up in the rocks and started fighting the dogs. One of the handlers shot that one and I took my kids down to help with retrieval. Of course it was in the deepest ravine on the property (but not the steepest). It was nearly quartered and boned by the time we got there. I loaded the meat in my MR Metcalf and the hide went into someone else's pack and we hiked up and out around 3 miles.

The next day we hunted the morning and then drove down to the New river for some sight seeing. The kids had school stuff to work on so my wife took them back to camp and a wifi connection while I helped pack another bear out. This one was a little farther down the same ravine we hauled the one out of the day before.

Day four, our last day of hunting. We followed a gal who is very serious about bear hunting down the road and the hounds hit scent but couldn't find it on the ground. We drove down the road a little farther and they sounded off again. This time they picked up the trail and the bear crashed off in the brush in front of them not 20 yards from the road. Usually that's a good sign and getting five dogs on it right away means it won't go far...usually. The bear ran away then looped around to cross the road in front of us somewhere, he'd lost three of the dogs in the cliffs but more were put on him at the road. We went to retrieve the lost dogs while others followed the bear, which was headed for the state park (No hunting).

He led the dogs down a ravine in the park that dropped rapidly over 1000' then back up the other side, shedding two more dogs. The rest of the pack chased him over the edge down to the river, a 1500' drop. They swam the river and climbed the bluff on the other side another 1500'. They were over five mile from where the chase had started now and the chase vehicles had to drive 15 miles to the bridge then 10 miles back on the other side of the river. The bear ran through residential areas and across a golf course. We followed an old timer down to the river to intercept if they came back across but the dogs finally gave up and were recovered in the rocky bluffs above the river. 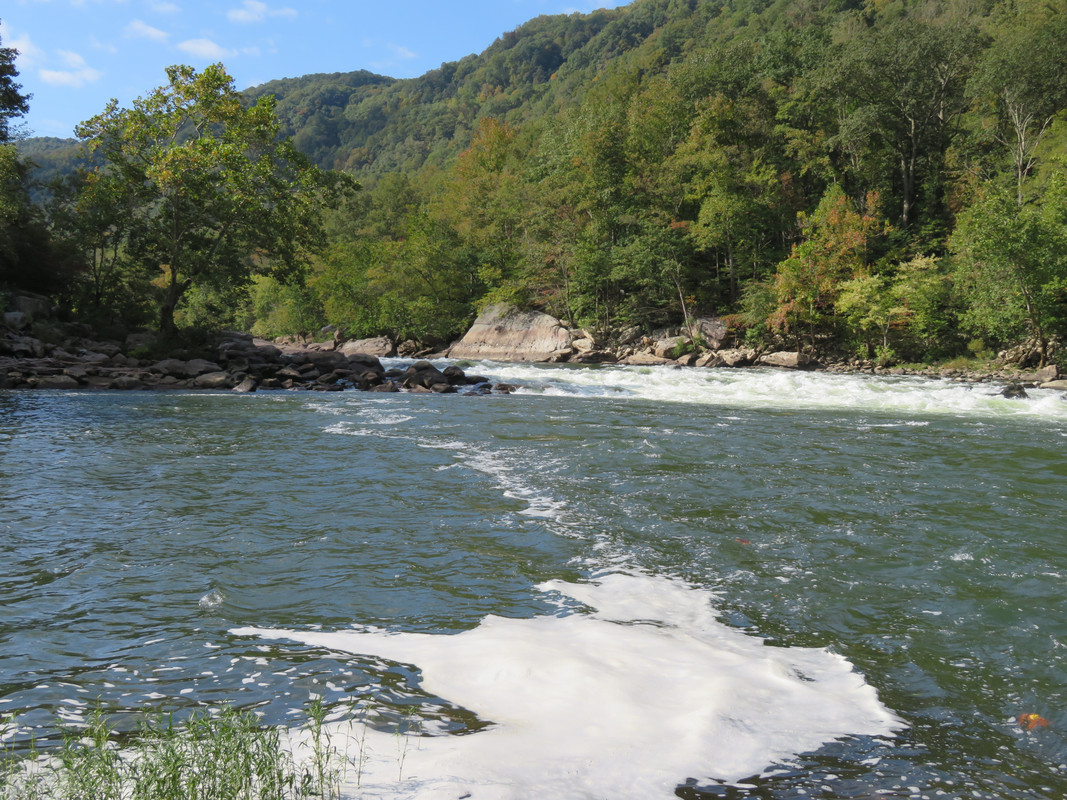 We got to do a little sight seeing on the trip. And evenings BS'ing around the campfire are always a good time.

Here is the mill at the state park. 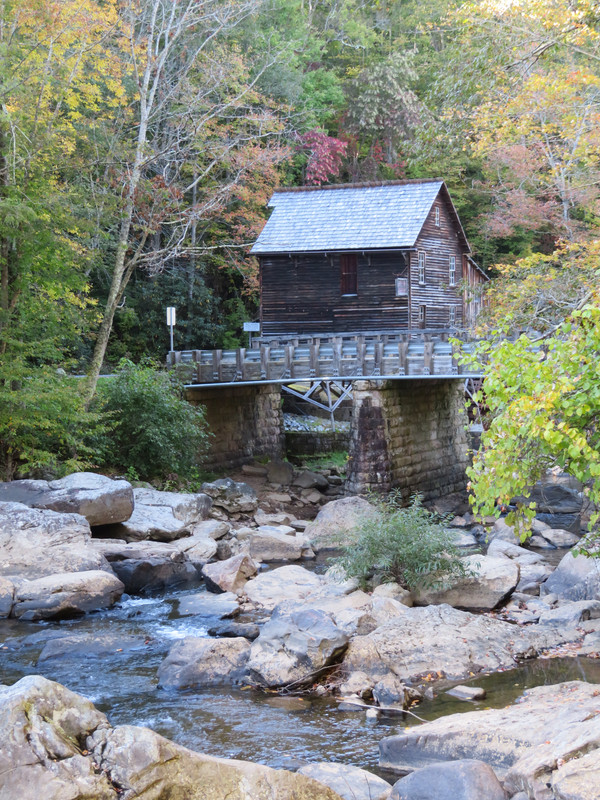 If you ever get a chance to follow the hounds on a chase don't pass it up. Even if you aren't hunting, just treeing the bears and letting them go is a blast. I've been hunting with these guys a few times and never tagged a bear and I keep going back.

And the best part of hunting in West Virginia...guiding and outfitting are illegal.
Last edited: Dec 14, 2020

Gotta love the Wild and Wonderful WV. Pretty in there this time of the year. Especially near the area you were in.
S

Congratulations to you and your son! That sounds like a fantastic time.
W

that sounds awesome pics and congratas

I love this story sounds awesome a huge congrats to the young man!

Awesome read, thanks for sharing! Nice bear too

I caught the fact about no guided hunting in WV. Are there other states that don't allow guiding/outfitting?

Hunting with hounds can’t be beat! Congrats on the bear, and I think it’s awesome you had the whole family there with you.

What a great time. I went on my first-ever bear hunt with hounds. Quite a change from sitting over bait. After seeing the work the guides do with those dogs, my hat is off to you for making such a commitment. Your son is fortunate.

I know the feeling too. Earlier this month, I put my daughter onto her first ever black bear.

Great story and photos. Running bears with hounds is a hoot, hard work too.
J

That's awesome, wish we could use dogs in PA

Sounds like a great trip! I hope to follow a pack of hounds some day and see them work on treeing a bear.

Love that truck set up!

Congrats on the wonderful adventure!
W

Awesome! Congrats!
You must log in or register to reply here.