Early this summer I got a phone call from one of my good friends from Anchorage. He told me he drew a limited quota ram tag in a good unit in Montana. My buddy Tom was so excited he told me he didnt sleep for 5 days, he'd wake up in the middle of the night, thinking about the ram tag he drew.

We made plans to meet up and hunt from Nov. 3 until the end of the season if needed.

We met in the hunting unit on Nov. 3 and looked at 86 sheep, seeing some good rams but nothing that Tom or I liked enough to consider shooting. The next day, right at daylight, I located a group of 8 rams in an upper drainage. From 2 miles some looked to be really good rams, in particular one dark colored ram. We made the stalk and with the help of another buddy, Dwayne, we were able to use hand signals to get within 300 yards of the rams. We looked at them for a long time and there were 4 good rams, with 2 being exceptional. One was the dark colored ram and the other was an absolute dinosaur of a ram. He was old, had a big chip out of his horn and broomed off at probably 38 inches. The other big ram was every bit as long, we thought, wasnt broomed but clearly dropped deeper and had every bit as much mass as the ancient ram. Tom decided to take the dark ram and we moved into 110 yards and looked at them some more. It was great to look at some big sheep close for so long, in particular when someone had a tag in their pocket.

Finally, after looking at them for a while, they all stood up and Tom took the shot with his 270 and the rams all took off running. I heard the bullet hit, but the ram he shot was in the lead. When the ram was clearly ahead of the others I told him to shoot again. He shot and missed high, but it didnt matter as the first shot was perfect right behind the shoulder. The ram soon developed a case of rubber legs and dropped and rolled a couple hundred yards down the slope.

Upon arriving at the dead ram, we knew Tom had taken a nice, nice, ram. Its a classy looking sheep and about as pretty as MT bighorns get. The horn lengths are 40 1/8 and 40 2/8 with bases of 15 1/8. It gross green scores 181 and change. Dwayne saw the whole thing from the bottom of the drainage through a spotting scope and hiked up to help us out.

Heres a picture of Tom and his ram: 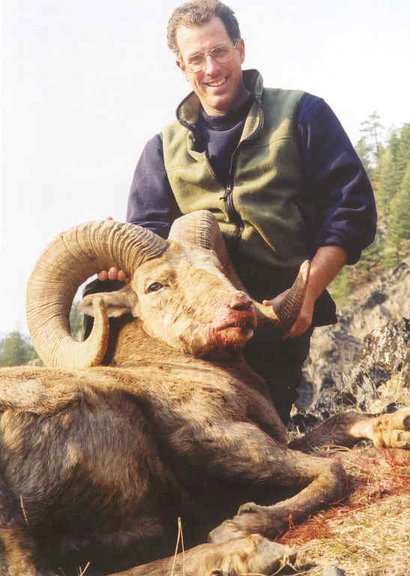 Heres a picture of me with Toms ram, I just didnt ever think I'd even be involved in such a great hunt and great moment! 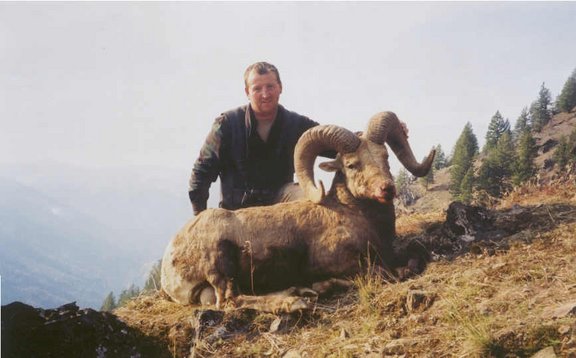 And finally, all three of us on the hill with Toms sheep. Dwayne is nearly 60 but still in really good shape and absolutely had a blast hunting sheep with us. What wonderful time that none of us will ever forget. 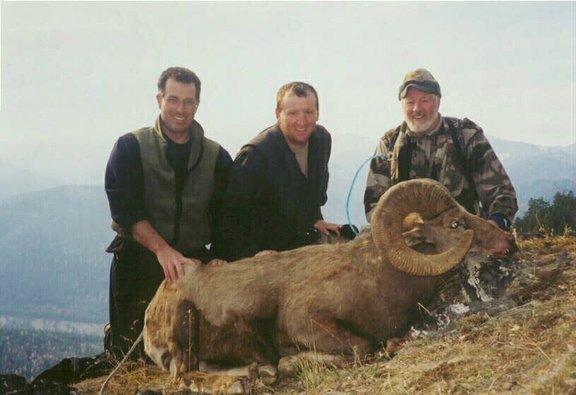 What an outstanding hunt! Great story and awesome pics! Congratulations to all of you!
D

Congrats to your friend

That is awesome! Congrats to Tom! Kudo's to the other two for tagging along, definitely something to remember. Hell, I'm not sure I could hack it in sheep country at 26 let along 60!

Congrats to your friend Buzz!

Wanna tell me the unit #? LOL

You seem to be pretty hard on wildlife populations of the Northern Rockies this year... Congrats to yourself and Dwayne for taking the time to help you buddy take a truly memorable once in a lifetime trophy.

Buzz, Congratulations to all of you on such a great hunt!

Congrats to Tom and to you Buzz

Congrats to Tom for a great sheep and also for having good friends like you and Dwayne.

That is really fantastic, congratulations to all of you! It looks like you're really up there, with the lower mountains in the backgroud, wow. Good pictures and story, too!
W

Thats a really unique ram... I've never seen one with such a dark face like that. Awesome headgear to boot. Congrats to your friend.

Where was he Buzz? Here's a pic of a toad I took this weekend while elk hunting.

WOW thats a nice one!
B

That ram you have the picture of looks more like a thin-horn with that nice flaring horn...pretty ram for sure. I wonder if that horn is 40 inches???
You must log in or register to reply here.