Things are winding down. I am going to try to get out a few more times here in the next week but kids basketball games are starting to take over my weekends.

My family owns a lot on a private lake just west of us. If you own ground on the lake you can hunt the lake owned property. Essentially it is a little mix between public and private. It is like private because you can leave your stands in the tree year round, drive into some places and not everyone can access it. It is still like public because there are still a good amount of people that have the same access.

The lake rules are you have to kill two antlerless deer before you can shoot a buck. If you get 4 the previous year you are good to go right away. I had three in the bag prior to Thursday so I was good on bucks.

I started on Thursday November 5. I didn't have the day off but I wanted to get out for a little bit in the morning before work. I got into my stand late because I had to go to my third spot. Right at day break I saw a nice young 8. My phone started to go crazy with work so I only hunt an hour and half and headed into work.
M

Friday started early. Shooting light is typically 630. I used to get in the stand 45 minutes early but in my old age I shoot for 20 minutes early.

5 minutes before legal shooting I had a small buck come through. At 7:30 or so three does came into my shooting lane. I decided to shoot one of them. They didn't seem to be ready for breeding and it would put me at number 4 for the year which qualifies me for a buck next year. Here is the video. I posted it on another thread.

This doe had a huge head for some reason. 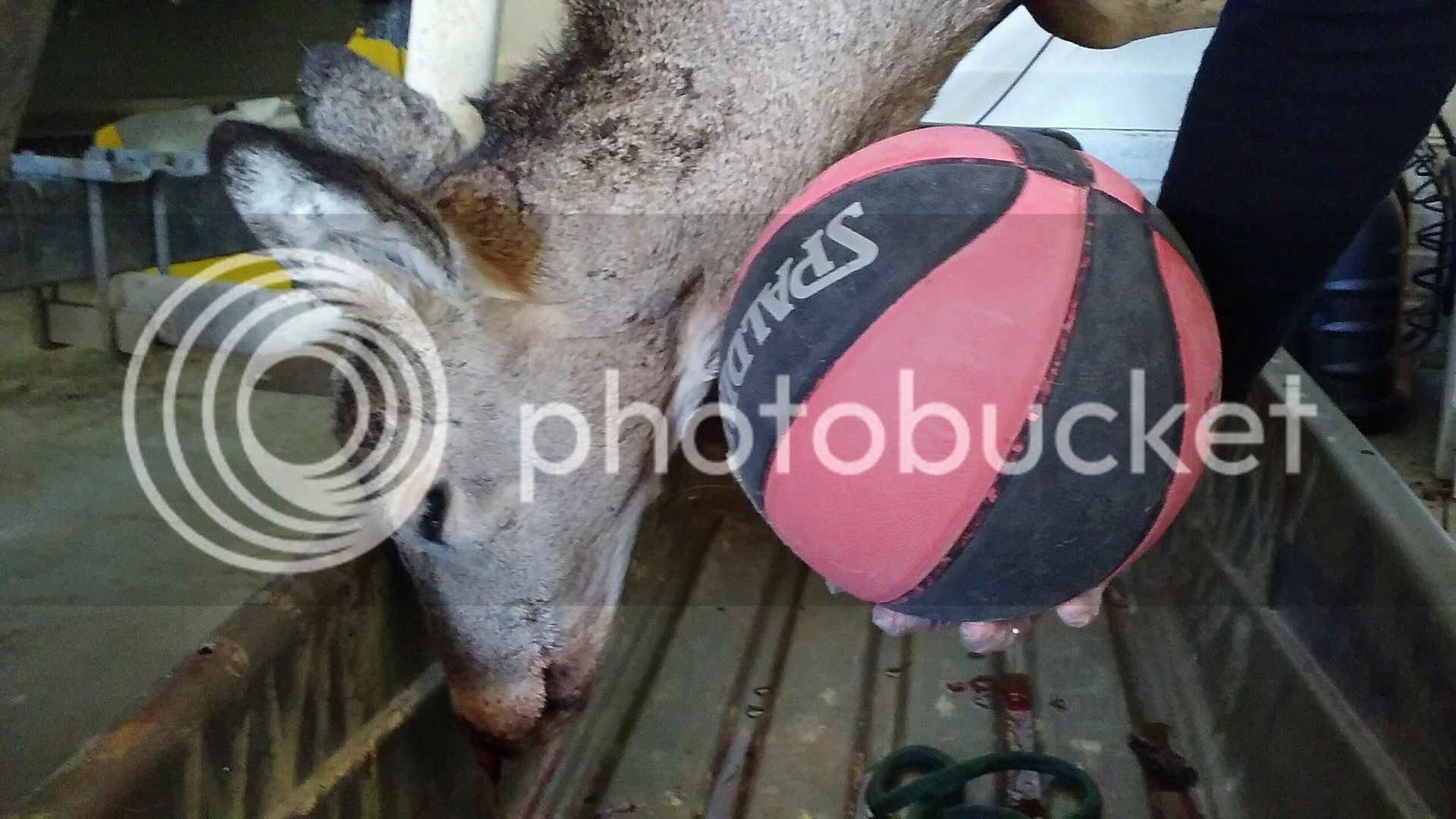 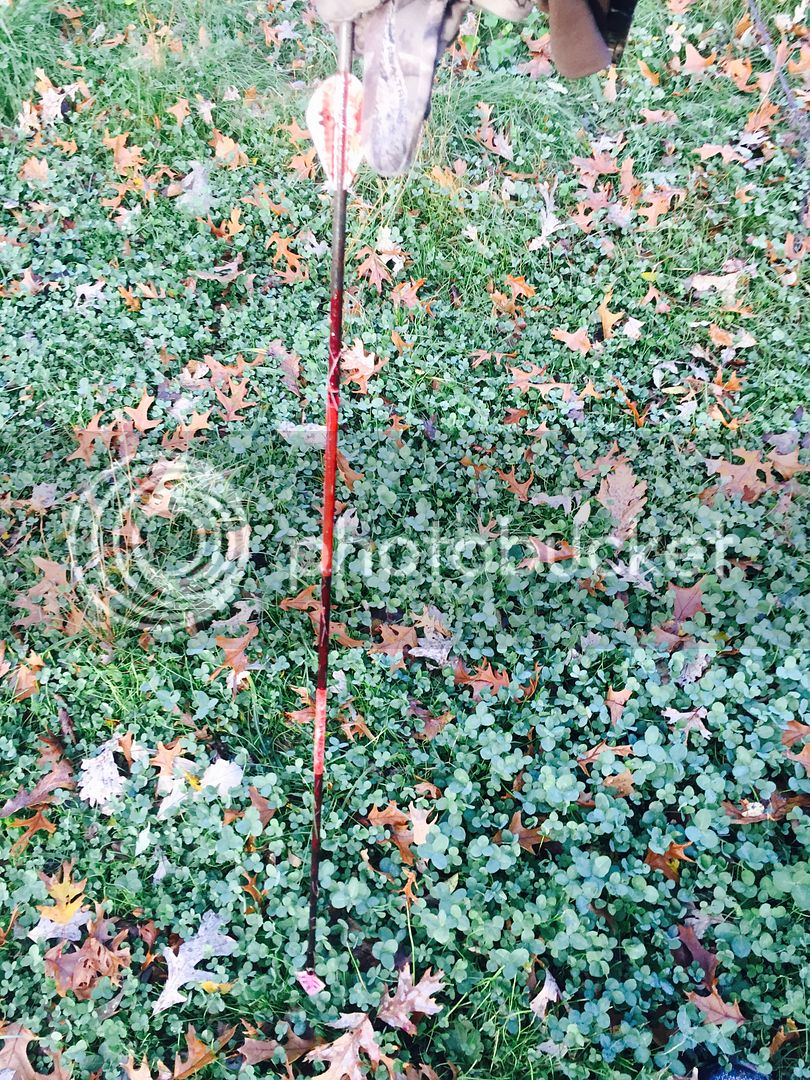 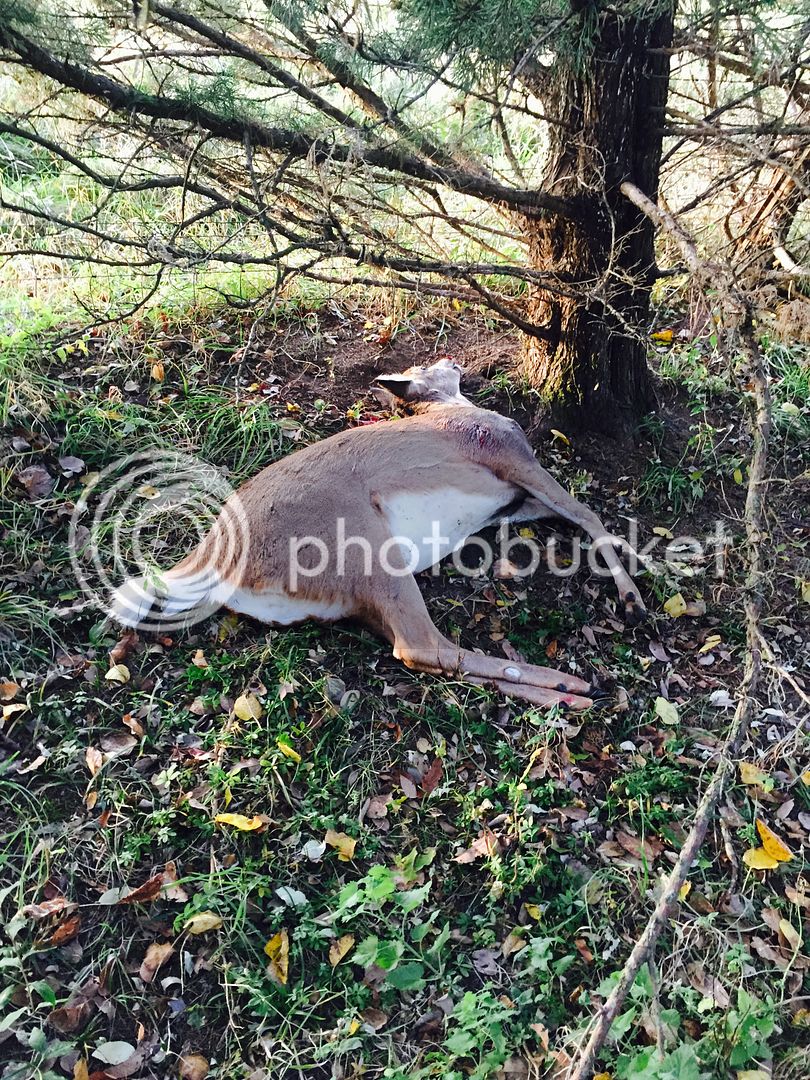 I am an engineer so math and science has always been my thing. I was never good at writing, English, art. I really enjoy videoing deer hunts but I have not spent the time to get good at it from a editing story telling standpoint. My favorite part about videoing hunts is being able to go back and look at the shot.

I drug her out quickly and got her registered with lake security.

I was back in the stand by 1:30 for an afternoon hunt. I saw a pile of turkeys and two small bucks.
M

My boys had basketball games Saturday afternoon so I could only hunt the morning. I asked my hunting buddy if he wanted me to throw the dog in the truck and hit a pheasant spot after the morning hunt.

The morning hunt was cold and windy. I saw three does. I could have shot one but I still had the one from the night before hanging in my garage. I have learned my lesson on shooting two before the first one is in the freezer, it isn't fun. We sat until 9;30 and then headed to see if we could get on some roosters.

We have permission on a nice section of waterway. It is two separate farms but we can hunt them both. It is a good 1 to 2 hours to hunt it right. With the wind we started on the opposite end from where we normally do. We made it about 50 yard in and the dog started to put up some hens. We went another 30 yards and my buddy said a rooster was running the edge. It decided to get up at 40 yards out, I shot once and missed when another one got up at my feet. I hit I on the first shot but it still flew so I hit it again. He went down on the opposite side of the waterway. His legs were still good but he wasn't fast enough for the dog. She tracked him down about 70 yards out.


We made it through the first section with a few more hens. We crossed over into the second section, about 6 yard in the dog gets really birdy. A rooster gets up behind me I shoot 3 times and put holes in the sky, my buddy drops it. Right after he drops it another one gets up in front and he dust that one, I pulled up but my gun was empty. Before the dog gets on either of the birds a third one gets up from behind and my buddy dusts that. He killed a limit without moving his feet. I have seen this in SD before but never Iowa.

With 4 birds in the bag we decided to just leave the rest of the section we hadn't hunted and hunt our way back to the truck. My girl put another one up about 5 yards from me. I blew a pile of feathers off on the first shot and missed on the follow ups. The bird kept flying, I forgot how tough pheasants can be.

Here is my buddy with the 4 birds and my dog. One of the birds is mine he emptied his gun once he got his three. 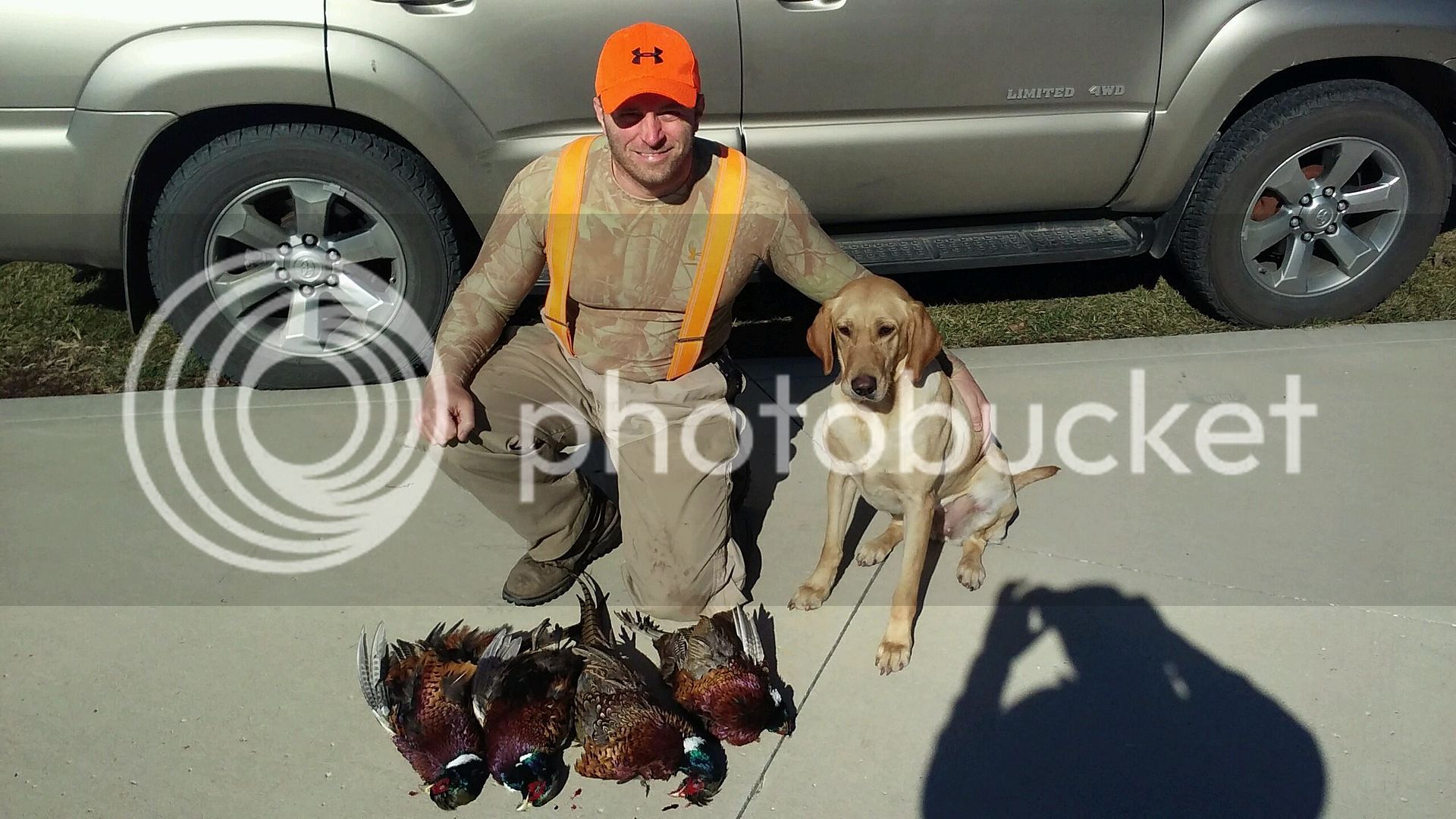 Super!! I like mixed bag days, even though I don't do it enough.

good luck to all
the dog
M

I hunted the Sunday but there wasn't much to report. I don't think I saw a deer all day or least nothing very big.

I was back in the stand early Monday morning. I had the day off of work so my plan was to hunt all day. It was a SE wind. We don't get those very much this time of year but I do have a stand set up for east winds so it was good to hunt it. It was a slow morning. At 9:00 I had a really nice 8 point come through. I had passed up several deer this size or bigger over the years but it came through so fast my brain said shoot.

I turned the camera on and hit the record button. Only problem was if you go from the camera off to on you have to wait a few seconds before you can hit record. So unfortunately I don't have this on Camera. He came through at 13 yards, I got the bow back and when I turned to shoot him my bow hit a hanger and scared him off.

He looked smaller going away than coming in so I laughed it off and I wasn't all that disappointed.

I did a mid day hunt during the day, saw some turkeys and one small doe off in the distance.

Monday night was the most exciting deer hunt I had without seeing a deer. I had two of them fighting in the timber about 100 yards away. I couldn't see them but they made a lot of noise.
M

Wednesday found me in the same spot that I killed the doe. After hearing the bucks fight on Monday I couldn't wait to get back in that stand. I was in bright and early, I had to work so I could only hunt an hour or so.

I saw this one buck up close. He was substantially smaller than the one I was going to shoot.

The farmer across the way started to shoot a .22 at something and it scared a few out from the pasture but I didn't get a good look at them.
M

Friday morning was my last vacation day to hunt. I decided to do my best and hunt all day.

I was back in the same area that I was going to shoot the 8 point on Monday but I was in a different stand for a NW wind.

At daybreak I saw three does. They were on the other side of the thicket. A few hours later I had a small buck in the same spot as the doe. He worked his way around a few different times. I thought he was gone and I rattled for the hell of it. A few minutes later I looked and he was walking right under my stand. He got a smell of something and jumped back a few feet only to work his back through my 20 yard shooting lane. The young ones always give you lots of looks.

I sat until 11:30 without seeing another deer. I got down and ate lunch and I was back in another spot at 1:30. I spooked a bunch of turkeys and deer so I wasn't overly excited to see much. I was right until 5:00. I had a small doe coming up a trail right towards my stand.

I was on top of a ridge. We don't deal with Thermals like you guys out west. Typically we have a decent breeze in a direction which keeps them going where you know or we are flat enough that it doesn't matter. This was a little different I could tell she thought something was up. She turned broadside, I decided to shoot her. I cant tell you what happened but the only thing I can think of is I rushed it because I knew she was alerted. Rookie mistake by someone that has deer hunted for 25 plus years. Dam that makes me feel old. I shot right over her back. I have a video of it that I should put on youtube but I have to make sure I didn't use a colorful word after the shot.
M

My older son's team won both there games but they got the #2 seed instead of the one because of point differential. That put them at 9:00. He plays a lot of basketball so I get to see a lot of games so I decide to miss the morning one and get updates from other parents.

I was back in the stand I saw the doe. I have killed 4 bucks out of that spot in the 5 years I have hunted out there. I killed two in one year. I probably hunt it to much at times, I just have a hard time getting away from it. I also know there is a booner running the area. It has been very hit or miss this year. The corn is still up so I am wondering if deer are just sitting in there. My only opportunity to shoot anything was one very large yote.

I carry a couple of mechanicals for turkeys. I decided to try to switch my arrow out to shoot the turkey. He ended up catching my wind and bolting before I could make the swap so he got a pass. I kind of wish I would have just put the camera on him and shot him with my regular arrow.

That was it. I am not sure how many more days I will get out. Wednesday through Friday look good so I may try my morning before work. It makes for a long night though getting up at 4:20, hunting and then going to work.

My older boy has another tournament on Saturday. I may just skip this one and try to get a deer down. If I get one during the week I may have to bust the duck boat out to try to get my 8 year old his first duck!

Sorry for the long post. It was fun to put my hunts into words, I only wish I was a better writer.
You must log in or register to reply here.