I got a call from this production company Friday. The attachment explains what they are looking for. The only old timers I knew about living that life are long gone.

<barf> another phoney "reality" show.
B

I bet this guy might qualify...my work partner and I helped him get his "truck" running. He was broke down outside Yellowpine. 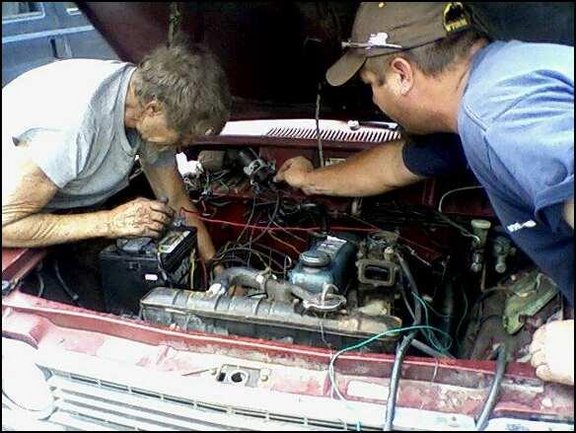 His truck was an engineering marvel...and actually pretty impressive that it still ran.

He had an old soup can as a ground for it. The distributer bounced out when he hit a bump (reason he was broke down) We used an old shirt and some wire he had in the back to "fix" it.

The fuel pump was hard wired to the battery and came out of an old RV. He had the fuel pump "mounted" on the outside of the grill to keep it cool. He said if he didn't do that it would vapor lock. The down side to the fuel pump being hard wired, is when he shut the truck off he had to jump out, open the hood, and unhook it or fuel just keep flooding into the carb. But, it DID work.

Thats awesome! I heard once that you can tell how crappy your vehicle is by how many special instructions it takes to keep it running.

If you living "Off Grid". I would be pissed if somebody turned them onto me. But that's just me. John
I


DRAFTSTUD said:
If you living "Off Grid". I would be pissed if somebody turned them onto me. But that's just me. John
Click to expand...

A Mountain Hand me down from dad !

Skiing with the kids!