I know I'm a little late but I'm finally getting some time to post. My season started out bad but ended up ok. Sorry for the long story!!!

The first day of my seven day hunt started on Sept 7th. A friend and I arrived about 3pm and had enough time to hunt the area I killed my bull last year (3 miles). We ended up calling in a spike to 20 yards but my buddy (who hasn't killed an elk yet) missed a chip shot. We hunted till dark and got back to the 4-wheeler about 2 hours after dark. This is where the bad part of the hunt starts. Getting off the mountain late and being tired I decided to play lets see how fast I can get down this curvy, gravel road. You guessed it, I turned but the wheeler just slid on top of the loose gravel and I hit the bank and flipped my wheeler on its side. We were fine but my Mathews Legacy was not. It was strapped on top of my pack on the front. It hit the Idler wheel first and pretty much turned it into the shape of a taco, split the limb 6" and broke the cable and string.

We dusted ourselves off and made it down the mountain much slower. OK I was pissed so I was still hauling a$$. We told the story to my dad and being well a dad he offered to let me use his bow. I said I appreciated it but wouldn't use it unless he shot something first.

Well I played guide for the first 5 days and saw a couple more misses. I was starting to get a little board when my dad finally connected on a 2-point muley buck.

My hunt was back on, the first morning a decided to sit in my treestand stationed in a well used burn. For 1.5 hours a sat and listened to wolves and watched the occasional deer about 200 yards away. During this time I would hit the cow call every 15 minutes. When I was about to leave I called one last time and got a response. Within 20 minutes I had a rag head 5 point 15 yards under my tree wondering where his cow had gone. I decided to let this bull walk but considered it a very successful morning.

The rest of the trip ended in a few more close encounters but with nothing I wanted to hang a tag on yet.

Things are looking better. I went home and talked with our local archery shop where I purchased my bow(Idaho Outdoor Outfitters). I told them the story and after a few laughs, Matt was on the phone with Mathews. After they laughed they asked what I needed to fix everything. Then he asked if I wanted to pay for 2nd day air or normal shipping. I said 2 day air. They hung up and I asked what the damages were going to cost me. He said about $20. I went wait a second it's going to cost me only shipping to fix everything on my bow which consisted of 2 new cams, 2 new limbs, and both the cable and string. Now I was a happy camper and couldn't believe the un-matched customer service from Mathews. They have a customer for life. Matt had it ready the day he received all the stuff and I was back in business

Here is the bow one week after I turned it into the shop.

Due to other activities I had one day to get everything back on track with my bow before I headed out for the last three days of the season.

I arrived in the afternoon on the first day and hunted my normal areas. I proceeded on calling in two groups of hunters and heard numerous real elk but had no close encounters.

The next morning I headed into the area of the calling the day before and called in a cool looking 4 point bull. He had damaged his right side and had a pretty sweet dropper. I still decided to pass do to the rut activity starting to pick up. I setup again on a big 6 point but his cows made the decision for him and he took off. I knew the area he was headed so I backed out and went after them that evening.

That evening I started ridge lining the area waiting for the first glimpse or bugle of the bull. About 1 hour before dark I heard his bugle and made my way to him. I hunt a burn and could see a long ways. I spotted a 300 class 6 point by himself and watched him thinking this was my bull. He was not doing all the bugling so I waited for the big boy to show himself. Within 10 minutes I found 3 seperate heards all with six points and within 200 yards of each other. The big bull was a massive six that would of went about 330. I was pegged down and couldn't move on the elk due to the openness and the number of elk. With about 15 minutes of light remaining my chance happened. Each group of bulls headed there own way and off the edge of the flat they were on. My plan was to get to the edge of the flat and have my dad throw a few cow calls his way. In hopes of bringing him back up to the flat. I had to hustle and with the light fading fast my dad couldn't see me get in position so he started calling a little to soon. I was about 40 yards from the spot I wanted to be when my dad called. The bull instantly bugled and headed my way. I ran the last 40 yards and stood by one lone burnt log with nothing to cover me. That was my only option since I could already see his rack coming at 45 yards. The wind was blowing at my back and I was just hoping my constant use of scentless products and the cow in heat wafers were going to work. They did and the bull walked within 25 yards of me, head on, and continued bugling in my face for 3-4 minutes. He continuosly stared through me but just wouldn't turn and give me a chance to draw. He finally had enough and bolted. I tried every call in the book to stop that bull but he wasn't having it. I just hate being that close to elk and not being able to even draw on them. I guess that's elk hunting.

The next morning started early and I was in elk again. I set up to far from a different heard of elk and couldn't convince them to come in. I re-setup as close as I dared and called again. This time within 5 minutes I saw a 5 point bull about 600 yards away making his way to me. He dropped out of site so with most of my attention his direction I called for about 10 minutes. Then something caught my eye to my left. A cow elk was standing 20 yards away and staring right at me. Thinking the gig was up I watched her put her head down and walk within 10 yards of me and towards the direction of the 5 point. Wouldn't you know it, the cow crested the plateau I was on the exact same time the bull did and he started messing with her about 75 yards away. Every chance I got I would call and let them now I was there with my Montana decoy. They kept dibs on me and the cow slowly started over the edge. The bull paced around deciding on what to do. He made the decision to chase the real thing. With nothing to lose I let it all out with estrous whines and lonely cow calls. The bull had enough and headed my way. He of course came in down wind of me. I had one window to stop him and wouldn't you know it, he didn't stop. He finally did 3 yards to far and I had no other shot for the next 30 yards. He ended up winding me and turned to take off. I stopped him this time in the window. He was quartering away about 50 yards. I let the Mathews bark and watched my arrow disappear about 5 inches in front of his hind leg. The bull took off and I watched him come out about 100 yards in front of me. The shot didn't look like it got the penatration I wanted and I was worried I would have to shot him again. So I started calling and worked my way in for another shot. During this time I called in another six point to 40 yards and watched him walk passed me and right up to my bull. He kind of pushed him wanting to fight but my bull just laid down. I backed off and went back to pick my gear. By the time I got back my bull had tried to get up a couple of times but couldn't do it. He expired shortly after. The shot ended up being better then I thought and went through his liver, one lung and poked out the other side. I guess the arrow just worked its way back out within 50 yards. 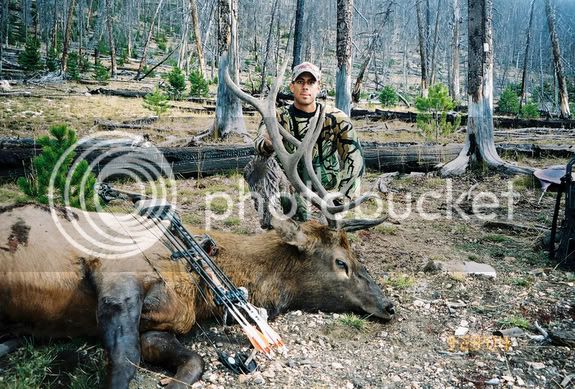 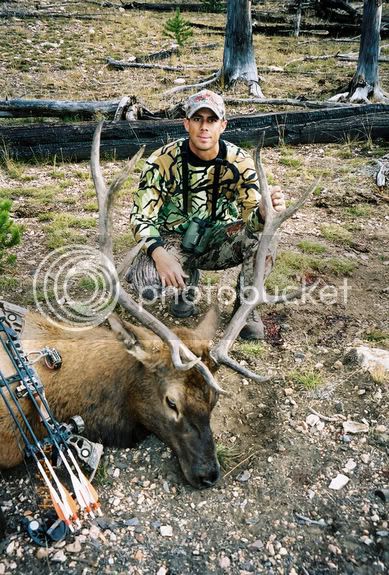 I'm very happy with my last day bull but just can't stop dreaming about the big bull. I just keep telling myself that he'll be bigger next year.
T

What a recovery! Very good. Congratulations!
B

Awesome bull man, congrats. I'd be happy to see the 4x with the cool drop this season.

Good story! Thats a nice bull and thats amazing that they fixed your bow for $20!

Nice bull and great photos IB! Way to stick (no pun intended) with the program as well- did your Pops ever get a bull?

I tweak the cable guard on my Jennings once and emailed them to get a price for replacement- they sent the guard, four different hats, and a pair of split-limb limbsavers, plus some stickers and other promo materials 3day delivery for FREE!
Know it probably didn't cost them squat but they sure made a friend in this consumer!
W

Great bull IB....isn't that our first score of the season?
J

Nice Bull IB
Great pics also
Glad to hear everything worked out for you.
Again Congrats

Great bull there IB. I never get tired of hearing the story. It's nice to know that there are still good companies out there who have excellent customer service like Mathews. Great pics, nice hat, and those arrows you're flingin' look mighty nice as well!!
I

Congratulations and thanks for the story!
R

Great bull and congrats. Wow what a deal on the bow!! Great story too.
I

wilecoyote76 - They're pretty good looking arrows aren't they. Thanks again for cresting them. I love seeing the orange disappear into the animal. Or over them, atleast I can see it miss.

Later,
You must log in or register to reply here.