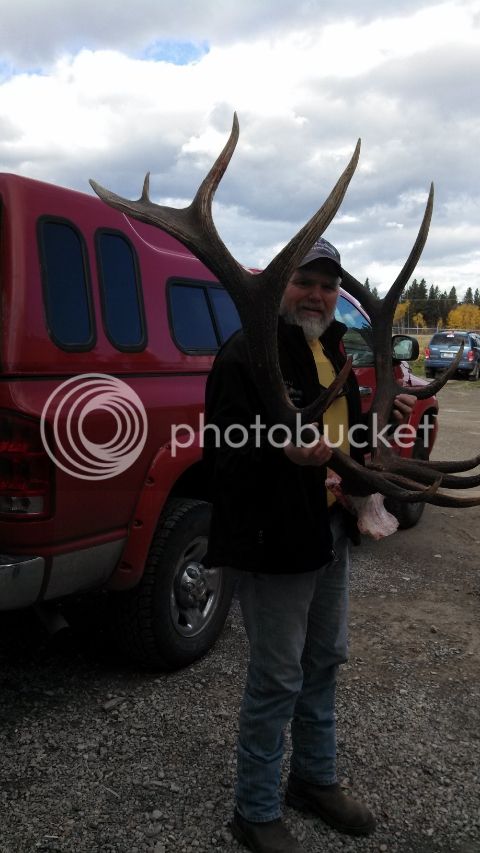 Was looking for a moose last Tuesday and came across some elk. I saw a 5 point raghorn, and bumped some in the timber. Those elk in the timber had a bull that made a lot of noise going through the trees so he had to be decent. So made plans to come back with the horses on Sat, the 25th for the opener to see jf I could get some elk meat. I have been hunting alone all season, my brother, who I always hunt with has been stuck on a project in Yellowstone and he's got a real bad rotator cuff, so I'm on my own. I hunted the same spot where I saw the bull Tues. in the morning but saw nothing but a few muley does. I worked a couple of different areas and found a fresh moose track so hung out there a little longer than I had planned. I wanted to get back to that spot where I had seen the bull elk. When I got back to that road there was only 30 minutes left of legal light, so I tied the horses and walked the rest of the way up the hill. When I got to the right place, I immediately saw a cow across the canyon. I kept watching and another cow and then a calf came out on the road feeding. As I watched one of the cows kept looking back the way they had come, so I looked with the binos really carefully through the brush and pretty soon i saw what looked like a real dark colored tree bobbing around, and I realized it was a big bull. At that point I only had 17 minutes of legal light left. I waited for him to feed out with the cows but instead he turned the other direction away from the opening! With 10 min. left he moved into a small window maybe 2 feet wide where I could see his chest, and decided to take the 180 yd shot, because I didn't think he would show the other way. I was sitting and rested on my knees. At the shot the .300 Ultra rocked me back so I couldn't see what had happened. But right away I heard a lot of what sounded like thrashing and then wheezing. I was pretty sure that was him dieing, but it was across the canyon. With only 10 minutes of legal light left I knew I had to really hurry down and across the hell hole to find blood or him before all light was gone. I had a hard enough time just finding where he was standing, I did finally find a little blood, but it looked like it went uphill, which is usually not a good sign. I could only follow it for about 10 yards before it just petered out. I could swear I could smell him though. So I got where the scent was strongest and went into the wind and within 10 yards there he was stone cold. What a relief! I have killed a few and seen a few killed, but this bull was big! As soon as I found him it started raining. I got him gutted finally and then was able to slowly roll him the 20 yards down to the gated rd. they had been feeding on. Then I had to go back across the hell hole to get to the horses. We were way soaked and the 5 miles back to the truck was uncomfortable. I went back the next day with the horses and had to ride a couple of miles farther to get on the same road the bull was on. I started skinning and boning and was able to get it done and actually got it all loaded on the horses. I really didn't think I would be able to lift them high enough. I always leave the bones in the legs so I have something to get a hold of. That gives me something to tie the rack to to keep it off of the horse. They were right at 100 lbs. ea. and since I didn't have my saw I had to take the whole head, cape and rack out in one piece. That damn thing was a hundred lb. too. My old gelding got 300 lbs. I hated that, but we made it okay. Of course it rained on us all the way out and soaked us again. And to top it all off the heater in my truck crapped out! Every muscle in my body hurts like hell! 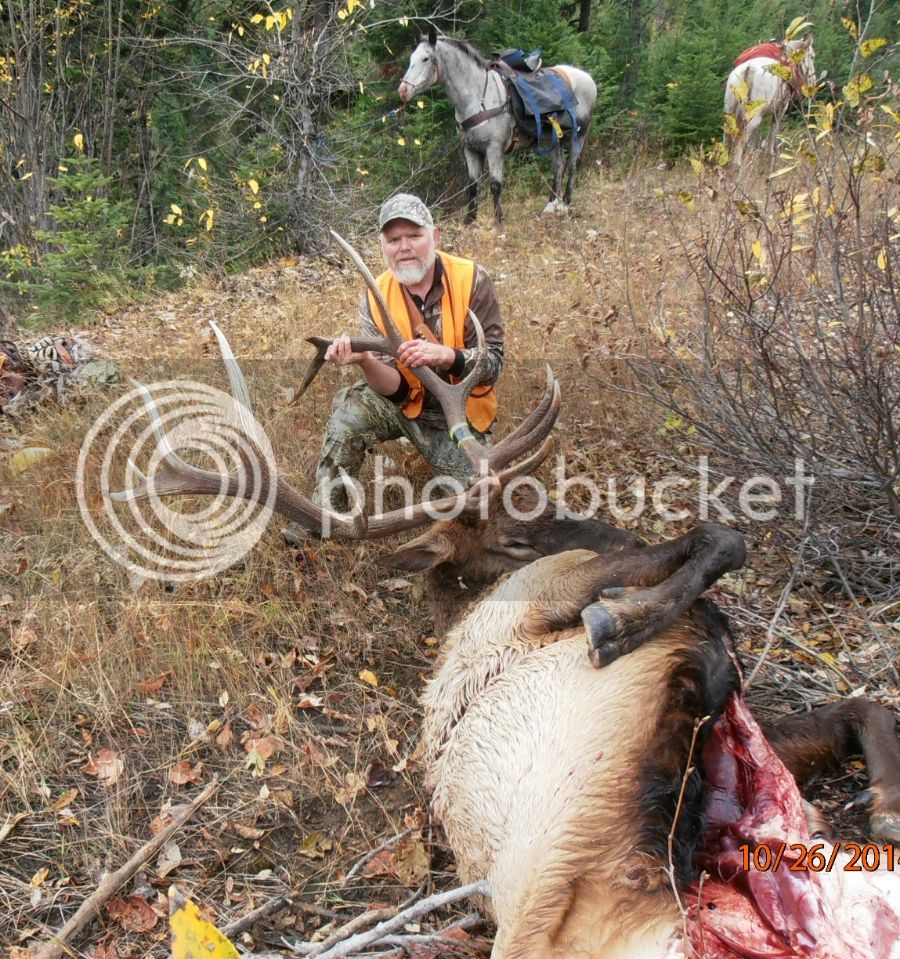 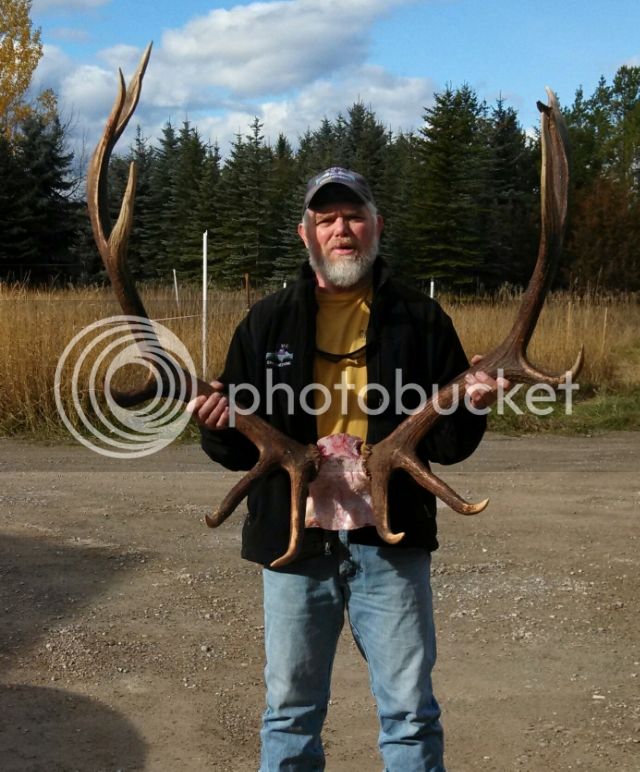 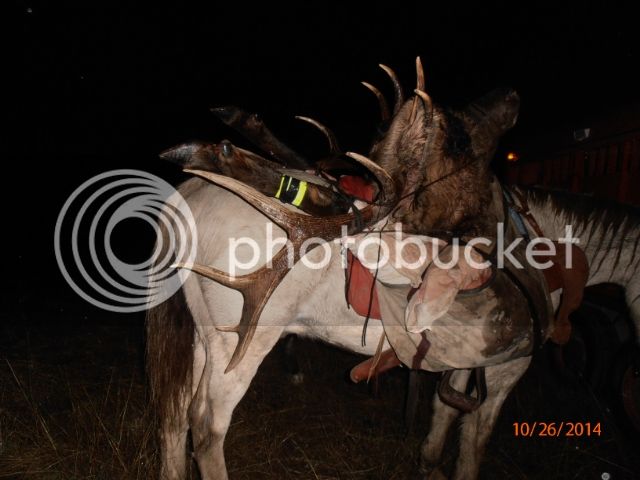 Great bull! Very nice story as well, thanks for sharing.

So you smell tracked him!! Congratulations.

I known that there are a lot of horses that would not accept those long antler tines touching their backsides without a lot of rodeo going on on the down trail.

Nice consolation prize! And 7 on that one side, very nice! Congrats!

Congrats on a great bull.

Congrats, an awesome bull and a great story too!

kansasdad said:
So you smell tracked him!! Congratulations.

I known that there are a lot of horses that would not accept those long antler tines touching their backsides without a lot of rodeo going on on the down trail.
Click to expand...

This old guy has been there and done that, but he did groan a little, I don't blame him. The spread was wide enough he actually had about 6 inches of clearance on each side. I usually have a saw with me and don't have to deal with all of that head. That makes it ride higher. I tie the skull cap right to the horn, then tie the beams to the hind legs. It always rides pretty damn good. I should just leave a wyoming saw in my saddle bag!

Right out of "Horses, Hitches and Rocky Trails" by Joe Back. What a one hunter story! Well done, sra61.

It's interesting how you get carried away in the moment, and then when that sucker's down on the ground in front of you and you reach over and grab that rack and hell you can't even move it, how quickly and completely your demeanor changes from "Hell Yeah, to Oh No!"
I love Horses Hitches and Rocky Trails! Best book ever for a guy who wants to do it with horses.

Nice bull, great mass!
You must log in or register to reply here.