Seven years ago to the day I hunted a public land spot in the Wairapapa (southern end of the south island) and had two stags aggressively roaring. That day I shot one with the rifle. Yesterday I decided to return to the same sport to see if I could get some more late roaring action, but this time with the bow.

The signs looked promising for the trip. New moon, weather clearing and nearly running over a deer on the way in convinced me I should see a deer or two 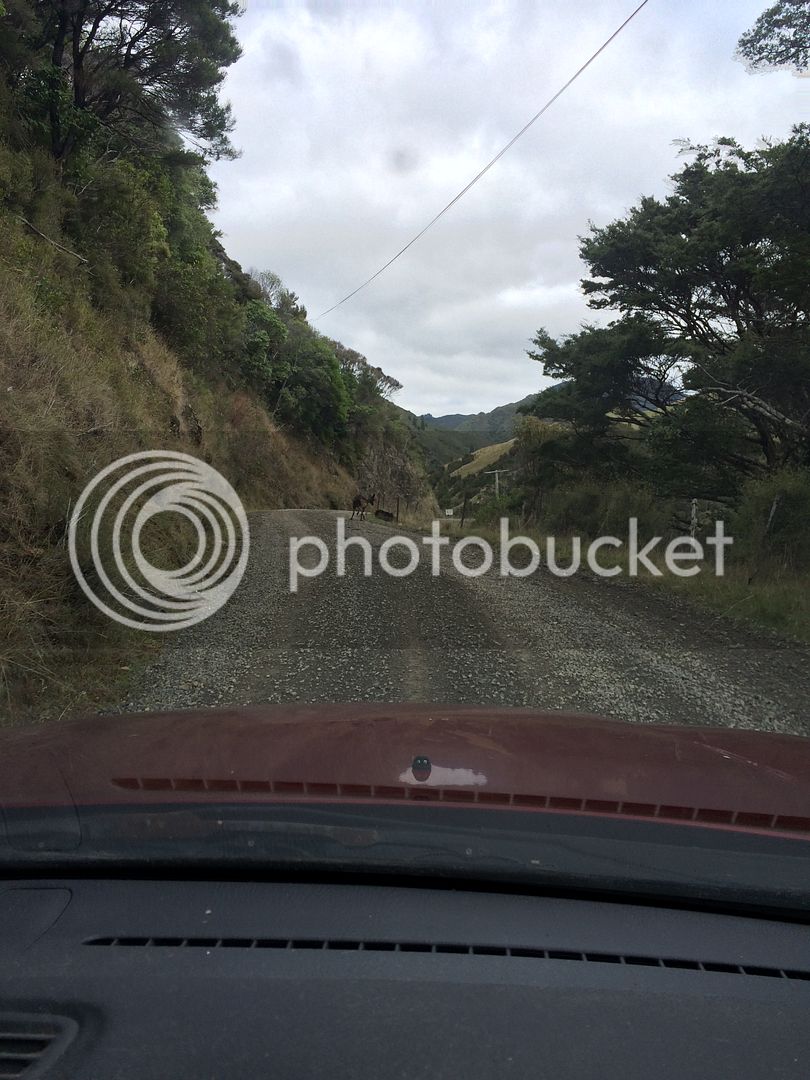 Reaching my first lookout I spotted a yearling after about 10 minutes. I was after a stag but decided with the bow I shouldn’t be too picky.

On the way to the yearling I saw another animal and when I got the binos on it I could see it was a nice stag. The excitement levels definitely picked Cheesy The stag was in a good spot for a stalk, small clearing with enough cover to get close. The problem was the wind, it was all over the place. I really didn’t think I had a chance in hell of getting close without being winded, but I didn’t really have choice . So off I went.

I closed the gap from 400 yards to 80 yards in no time. The next 40 yards took about 15 minutes, want to take my time was difficult as I didn’t trust the wind and just wanted to get close as fast as possible. The pressure was on and the adrenalin was definitely not helping.

Eventually I got to 40 yards and that was close enough, in fact it felt very close

Now I had to wait for a broadside shot. Luckily he was moving around a bit while feeding. I could hear him biting the grass and chewing. Now I’m not the most patient person and waiting for a shot was taking all my control. Finally I was broadside and once I got the sight on him he don’t look so close. I slightly rushed the shot but it was still good and he was down. 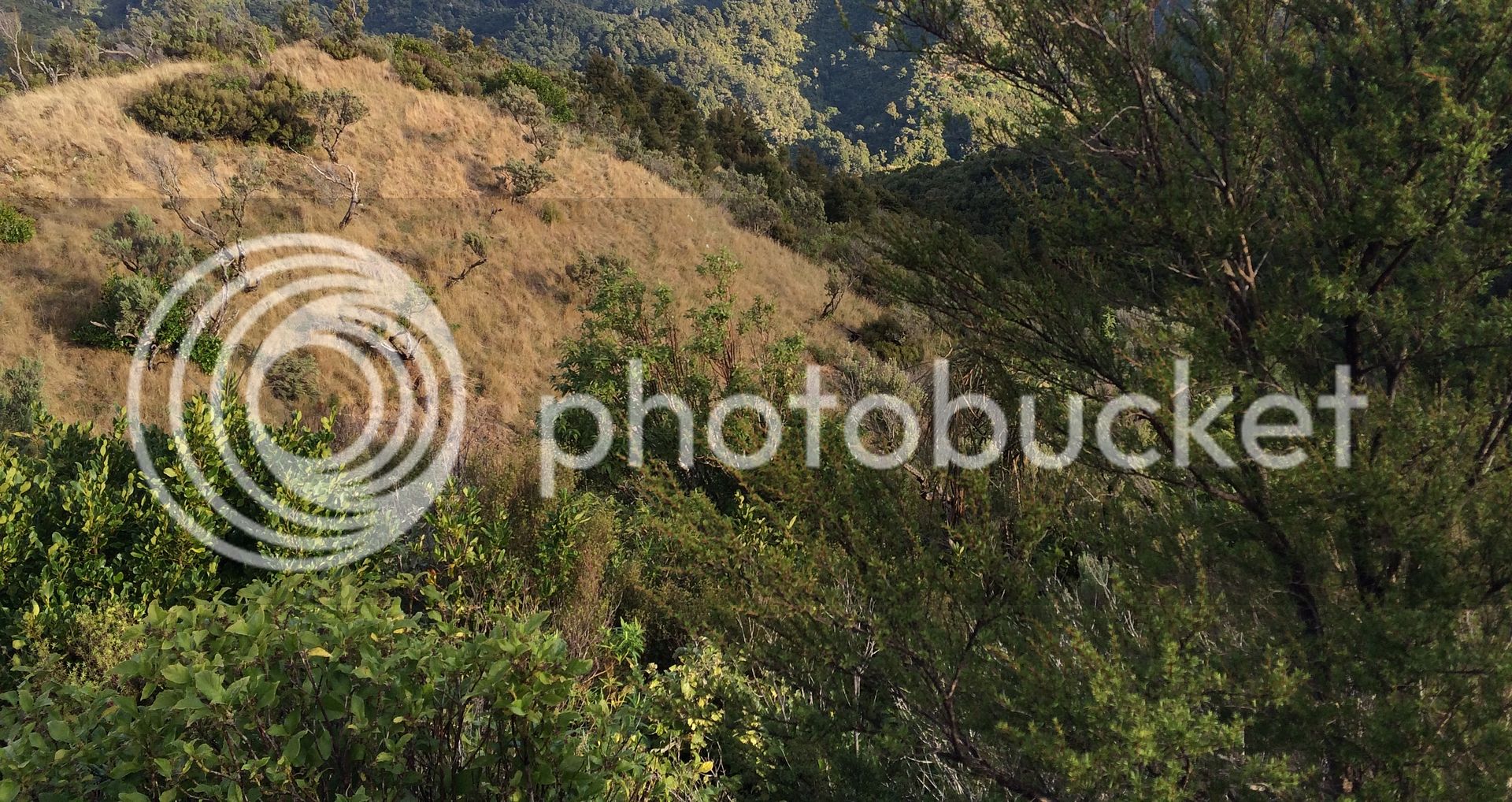 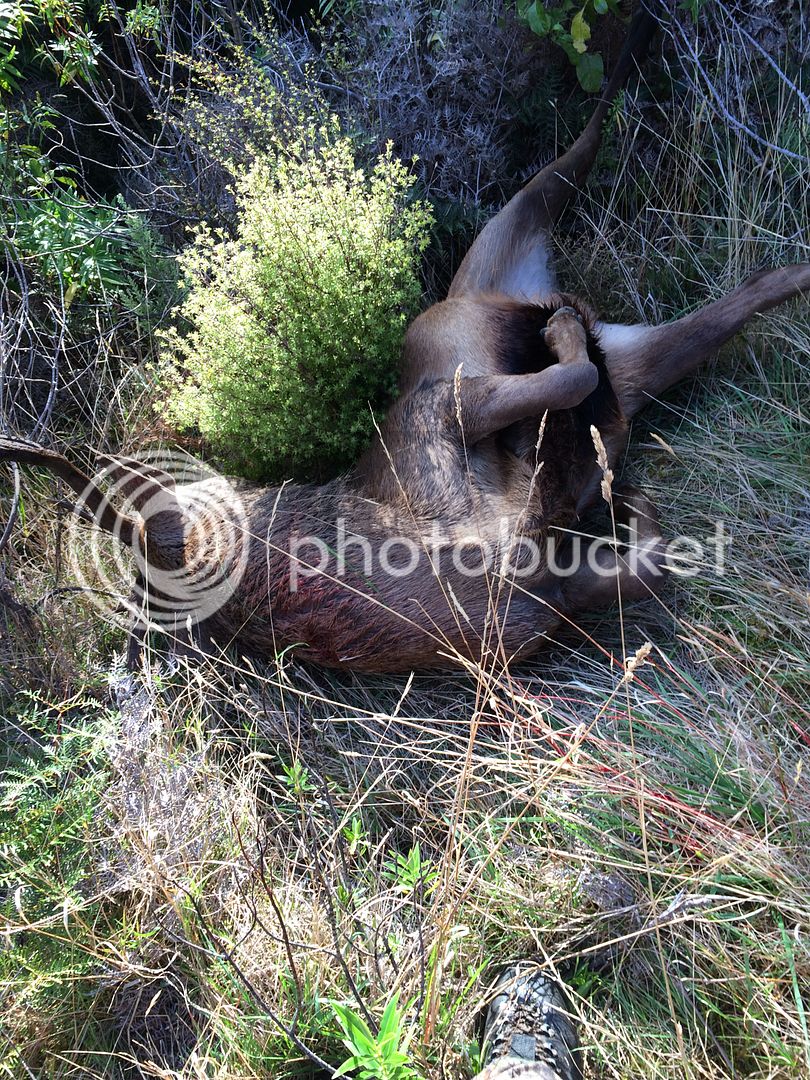 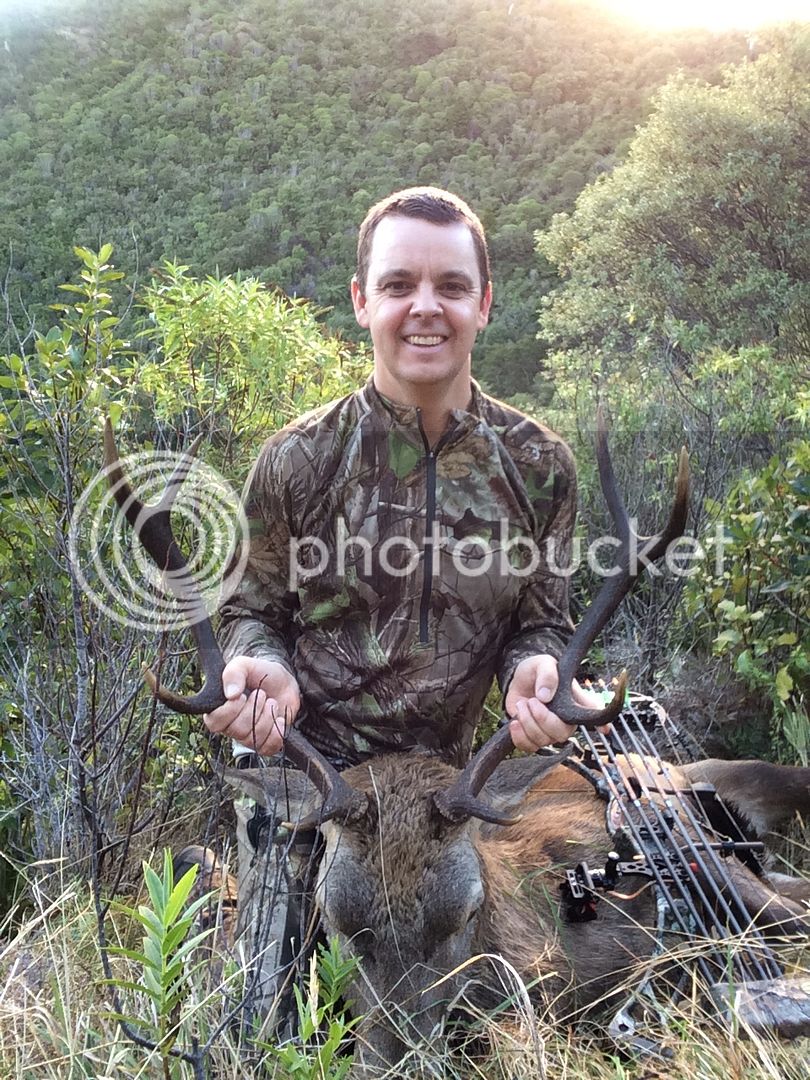 I took my time getting the meat and slowly made my way back to camp. The legs were fit after a recent fiorldand trip, but the knees felt every step. Back at camp I had a beer, a few whiskeys and cranked the party music up 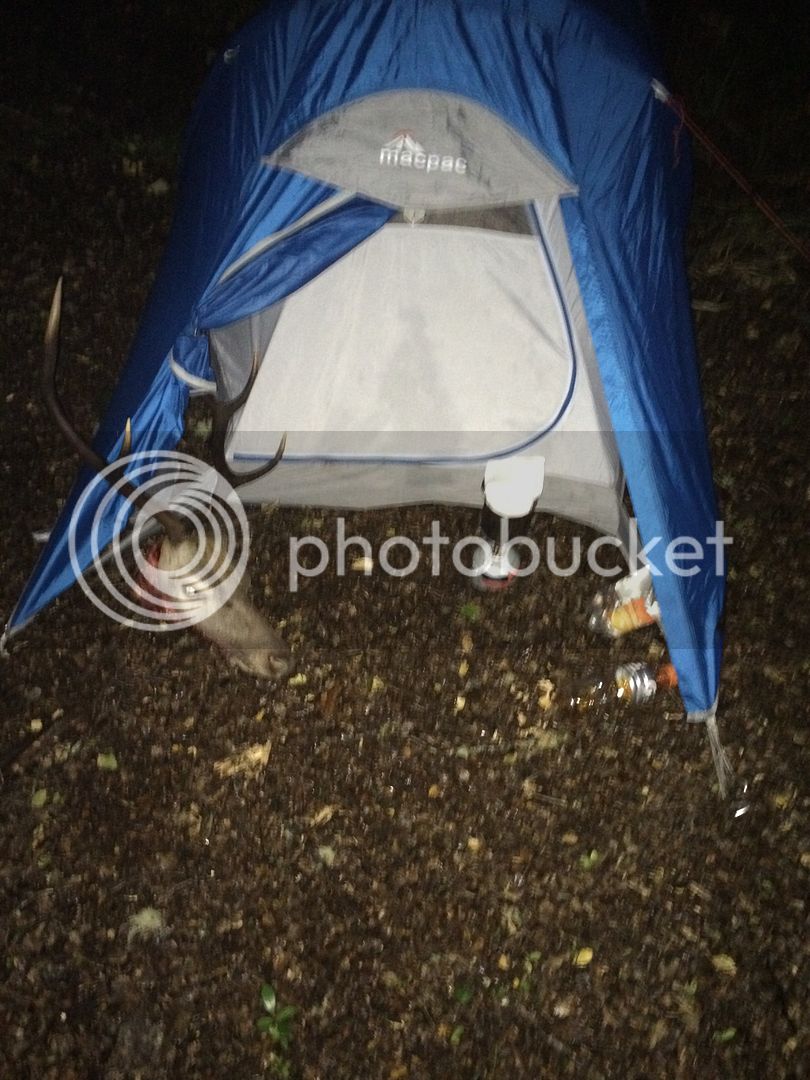 This hunt was definitely one of my best. It was a massive sense of achievement to get such a clean kill on a stag using a bow

Nice stag, takes real skill to get that close to a deer.
I wish we were allowed to bow hunt in the UK.
But damned if i can see a leg in the picture!
Cheers
Richard
M

Very cool.So that's an average stag or better then average??How far in were you camping?
L

Congrats.......getting in shape for antelope.

Outstanding! Congrats on your successful hunt. Thanks for taking us along!

Nicely done! Thanks for the story and photos.

I think I need to add one of these hunts to my bucket list! Congrats on great harvest.

mixedbag said:
Very cool.So that's an average stag or better then average??How far in were you camping?
Click to expand...

Probably best described as less than average. A 12 is a standard trophy, and a big 10 is also prized. Mine being ony 8 and fairly small is just a nicely shaped stag. It's a bit subjective but my head is a real prize to me as it was such a great hunt. I was camping in about 45 mins walk from my car. This is about the easiest camping spot when I go hunting.
Last edited: Apr 24, 2015

Awesome, got my heart pumping just reading your story!
M

Is it tough bringing guns into NZ?I'd love to get out there and see the place.What month is the rut for the red deer?Is there wild fallow deer on island or is that all private ranch hunts?Be fun to do a trip for both,and get some fishing in

I'm going again in 2 weeks but only taking my bow, because of the recent fiasco with US customs new export rules I cancelled my permit application but now the CBP suspended the new regulations.
ps. If you bring guns and have a connecting flight after arriving in Auckland, make sure you give yourself plenty of time to go through customs and gun permit process when you schedule your connecting flight.
Last edited: Apr 24, 2015

mixedbag said:
Is it tough bringing guns into NZ?I'd love to get out there and see the place.What month is the rut for the red deer?Is there wild fallow deer on island or is that all private ranch hunts?Be fun to do a trip for both,and get some fishing in
Click to expand...

I haven't travelled internationally with guns, but as far as I know its easy getting through NZ customs but USA might be a problem. Like glass eye I am travelling with a bow in Sept.

The red rut is late March to mid April. The sika and fallow is a littler later. Then the chamois and tahr rut a bit later still.

You can hunt fallow on both private and public land on both the South and North Island. See here for public (DOC) land info http://www.doc.govt.nz/parks-and-recreation/things-to-do/hunting/what-to-hunt/deer/fallow-deer/.

The area in this report has both public land fallow and reds.

Great hunt! I look forward to reading about your adventure over here this Fall.
R

Nice stag! And with a bow makes it that much sweeter.

NZ is definately on my bucket list, it just looks awesome there!
P

Nice work kiwi as you said doesn't have to be a giant head to be happy with it.

Are New Zealand women as awesome as Australian women? I could definitely cope with doing some hunting down there

To all you guys saying NZ is on your bucket list..........once you go that bucket will become bottomless, suddenly that once-in-a-lifetime trip becomes an annual event, and you might even consider immigrating there.
S

Well done Kiwi! Your smile in the trophy shot relays your sense of achievement well.
You must log in or register to reply here.

Back after 6 months absence
2

T
Red stag in the rut