Today I made the trip to the taxidermist to pick up my bear taken last year on the 2014 HT bear hunt. I couldn't be more pleased with the work of Wildlife by design (Matt DeFazio) Pleasantville , Ohio. His attention to detail is top notch, custom walnut base, all the stone work was hand carved & colored by Matt, the bear has all his man parts and even belly fat wrinkles as he his taking a stride. The elk rack buried I found in Co. a few years ago. Right now it's sitting in the middle of the family room, not sure on the final resting place for this guy. To say the least this gets me fired up, especially since I leave in 4 days to head back to Montana with the HT crew., this year I'll be hunting with my bow. Special thanks to all the guys that played a part in this, and to my taxidermist bringing it back to life.

This evening I had a few buddies & neighbors over checking out my bear mount and having a few cold ones around it when one said that groundhog is out. I've been trying to kill this ground hog living under my barn for a while now with no luck, last 2weeks I've been trying to trap him too. I told the guys stay put, I'm going to kill that whistle pig! They said with what? My bow I said, of course they laughed. I slipped into the garage grabbed my bow & opened the man door, with him sitting right in front of my archery target I new the yardage, with guys faces plastered to the windows, I'm gonna be a hero or a zero. I let the arrow fly, 50yds dropped him in his tracks! You should have heard the eruption in the house! Fun stuff, that called for another round of suds!
No clue why pic won't turn?

Hey Dave..My wife just asked me if you're going to get the woodchuck mounted like the bear

JohnCushman said:
Hey Dave..My wife just asked me if you're going to get the woodchuck mounted like the bear
Click to expand...

Not hardly,,,,,,,my pending taxidermy bills are enough as it is. Oh, I dropped a turkey off to him today too! I gotta stop the madness,,,,,,Not! Maybe a bear rug next week?:hump:

Great looking mount! If you aren't stuffing the whistle pig, how about making him into groundhog gumbo and doing your part to contribute to the campfire cuisine?
B

Great shot! Amazing mount and best of luck on your trip. Good huntin'

Everything but the heart beat. Looks great.

That looks really cool. I bet it takes up a little space in the family room.

Nice bear mount! I grew up not too far from Pleasantville, now I live up in Gahanna. Hopefully I can get out west soon, good luck on your bear hunt!
1

Very well done mount, congrats! I'd be happy to see a bear like that next week...
R

That turned out awesome Dave!

That really did turn out cool, Dave!

Cool bear mount. That will take up some space in your room.

I rotated the photo for you. 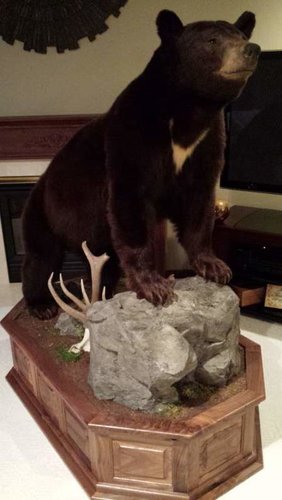 What a beautiful bear and a great mount!
You must log in or register to reply here.