This wolf season has been very challenging. I went the first four weeks without seeing any tracks or even hearing a distant howl. In the last twenty days however I have located a large pack that seemed to be spending a lot of time in a really big valley with mountains on all four sides. No roads or trails other than those created by animals, go through it. 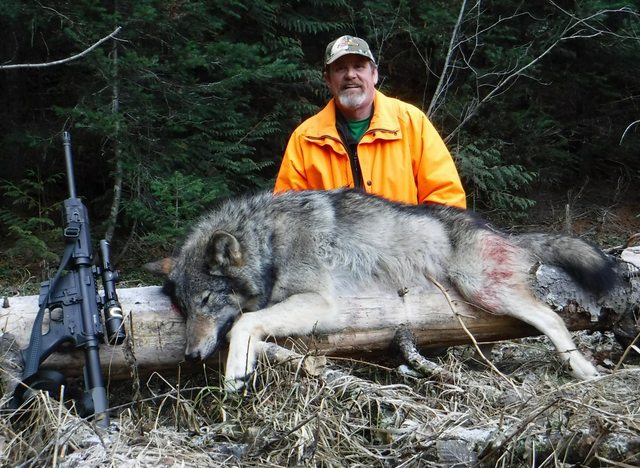 On three different mornings I had hiked in the dark to a point that overlooks one end of the valley and I had wolves respond to my low howls. Each time I had then waited for first light before attempting to stalk down to where I thought they would be. They were always in thick pine and alder patches which made a close approach difficult. Particularly when you consider the covering of crusty snow and crunchy frozen ground.

On one occasion after about a 90-minute stalk I was close enough to literally hear them moving around maybe 40 yards away. The brush was so thick that when I settled in to call, I actually set aside my rifle and pulled my Glock 20 (10mm) knowing that any shots would be measured in feet and the rifle would be very difficult to maneuver in that situation. Before I even put the call in my mouth the woods became very quiet, I called softly for ten minutes with no success. Even though there was no perceptible wind I am certain that one of the dozen wolves in that pack smelled or heard me and they all somehow left without a sound. Had they responded, that spot would have been a real rodeo!

A few days later I was at the west end of the same valley and howled them up again. I spent about an hour climbing up the hillside to get in a spot maybe 400 yards downwind of the pack and began to call. Within three minutes I heard a loud alarm bark directly behind me at maybe 30-40 yards. Who knew that while most of the pack had been howling to me from the valley below there were a couple more hanging out on the mountaintop to my rear. They had come in quick and ran right into my scent trail. They started making alarm barks as they ran away at warp speed. Being above and behind me, I had no shot. I was so focused on where I KNEW the pack was that I was not watching my back trail. Rookie mistake!

I left them alone for about a week. On Monday I had the day off, so I went to my point and howled in the darkness. I was fairly sure I could hear a howl, but it was incredibly faint and a long way off. Since it was still early, I decided to go back to the jeep and drive around to a spot where I could approach from the other end of the valley. I got there just at daylight and gave a few soft howls. I had a response like no other. There were probably a dozen wolves going off at max volume and they were spread out over an area about the size of a football field, ¼ mile in front of me. They kept howling for the next fifteen minutes with only short breaks in between. I was hustling to close some of the distance, counting on the fact that with a slight breeze in my face they would not smell me, and I knew I would not be heard over the incredible noise they were making. When they would stop, so would I. When they howled, I moved. It was only about 5 degrees that morning and even in my excitement my gloved hands were getting seriously cold and stiff. I was in a stand of old growth cedar and if you have ever seen one, you know that almost nothing grows on the ground there due to a lack of sunlight. I made some good progress but then came to a steep slope where the alder thickets began.

As I stood there looking for a spot to call from, I took out my camera to record the raucous howling going on. As I started to record, I heard one howl in the alders literally 30 yards directly downslope from me. I did not know they were that close, and with frozen hands I nearly dropped my camera in the scramble to put it away before I either got busted or had a wolf in my lap. (I watched the 15 second video later and it bobbles and shoots skyward when the close wolf howls. Pretty funny stuff if you know the back story)

I just squatted down next to a large cedar and hid as best I could. With my camera safely back in my pocket I began to make some VERY soft squeaks on my 30 year old P.S. Olt call. 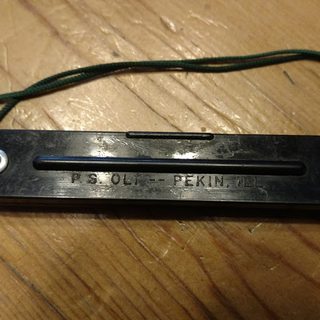 I usually call with one of Bob Patricks amazing RareEarth calls but I thought at this range a really soft squeal to an unsuspecting wolf would be the best option. I made about five fairly rapid soft calls and then shut up. Within seconds I saw a brown colored wolf moving my way in the brush. I had no shot, but it would soon approach an open shooting lane.

As I watched it move my way a second wolf 10 yards behind the first was also coming in. This one was obviously a male as it was substantially larger and heavily built. He was jet black from nose to tail with some silver on the saddle of his back. He too was in the brush and I could not shoot.

Both wolves were now inside 20 yards. While I would desperately love to take a giant black wolf, I knew that in this situation I was taking the first clear shot that was offered. Screwing around and waiting for the second one can quickly turn into a situation where you lose them both. When hunting wolves, I have learned to always take the first ethical shot that is presented!

Their approach took only seconds, but it sure seemed like forever. I was already tracking the brown one in my scope. The glowing yellow triangle of my fiber optic post reticle was on its shoulder so the moment it stepped into the open I simply pressed the trigger. At about 14 yards the 123 grain, .30 caliber, Federal soft point from my 7.62X39 AR put it down hard. Through the scope I saw the wolf give one reflexive kick of its back leg, so in an abundance of caution I instantly hit it again with an insurance shot. This was no place to track a wounded animal. I then started to scan for the second wolf, but it was long gone after the first shot.

I did a few injured yelps with my mouth, but nothing came back to investigate.

I gathered my pack and went over to check the wolf. It was a 2-3yr old female with a lush winter coat. Like all of the others I have taken, she was in excellent condition with a nice layer of fat.

As I notched my tag, I could hear a few howls in the distance as the pack put some serious real estate between us. I drug the wolf to an opening where I could pose her on a log out in the light for some photos. I then loaded my backpack, slung my rifle and started to haul the wolf out. I have discovered that when moving a whole wolf through brush and blowdown it is easiest to simply straddle them and hold a front leg in each hand. Then I just lift and swing it forward, step forward myself and repeat. I made it up to my jeep in about 40 minutes which was still a full five minutes before the adrenaline rush wore off!

I don’t care how experienced you are, up close predator hunting like that is seriously exciting!

I drove into town where a biologist took the mandatory hair/DNA samples and placed a permanent tag on the hide. My taxidermist was waiting when I got there an hour later. He skinned and prepped it for tanning, and I harvested the hind legs and backstraps to give to my neighbor. He is an expert at smoking meats and wants to give it a go. Should be tasty! JCS

At 14 yards in thick stuff I imagine the adrenaline and your heart rate are going a bit crazy. Congratulations!

But that rifle looks like it must weigh a ton. What 30 cal is it?

Awesome stuff mate, I love predator hunting here in Aus. Wolf is on the list one day.

Very cool! Thanks for sharing.

I Really enjoyed the story! Congrats!!

Great read, I had the pleasure of being 10 yards from a lone male wolf whilst tracking a wild boar, I managed to get it on film but unfortunately we are not allowed to harvest wolf in europe I will one day try and hunt one legally somewhere, I am fascinated by predators,regards wayne

Cool story! Would like to see an update on how the meat turns out.

Very cool. Bucket list hunt for me some day.

Congrats! Thank you for sharing the story and the pictures.

Wolf on a smoker? Never heard of that! I'd give it a try!

yeah man, I think you're a bit of an adrenaline junky being that close would be INTENSE. Congrats on the hunt!

14 yards? Wow! What an awesome experience. Thanks for sharing.
You must log in or register to reply here.