Ive took part in alot of hunts and helped kill/packout bulls that most guys dream of. This year, i drew a MT tag with hopes to have a chance to put down a good one for myself.

We ended up losing my Dad to a stroke this year in May. Life just hasn’t been the same since then. I was really wanting to share this hunt with him. We made big plans for the year.. My wife and I also started to build our “forever home” this past year and moved into it in June, so the spring and summer were a blur.

Before i knew it, September had came and went. I spent half the month in MT hunting archery season. I found some great bulls and passed up more then I ever thought possible. It was quit the experience. Every time i would get close to making it happen, things would fall apart. Having the same big 6 point at 70 yards a handful of times and watching it dwindle away was frustrating.. but thats hunting. For every failed stalk or setup i have, i think i become that much more better of a hunter. Toss it in the ol’ knowledge box. I decided to head home, see my kids and wife, and check on work.. wanting to make it back before archery season closed, i knew i would probably just come back for rifle season.

Making it back out for rifle season I had high hopes. I found some of the bulls I previously chased, with a few having busted tines..just needed the weather to cooperate. The storm that rolled through had me sleeping in the back seat of my truck for 4.5 days, not being able to drive the roads and make it back to my camper... but i was still able to hunt everyday as miserable as it was. Not sure if almost running out of beer or hiking was THE WORST.

Finally made it back to my camper, got a good meal and an awesome nights sleep. I woke up and made a pot of coffee (didnt have coffee while sleeping in my truck) knowing that today was the day. The stars were extra bright that morning and it was calm.. i did a pre-game pump up, listening to Copperhead Road then hiked to a glassing knob.

The first couple bulls i saw were raghorns and were starting to head for their beds. The third bull i glassed, I knew well. It was the big 6 point. He was just over 1,000 yards. I took off down the ridge to get into range. I set up at 500 yards as we were on the same elevation and i didn't want to lose sight of him. I ranged him 4 times, dialed and sent it. I watched the shot take out both shoulders and sent another one for insurance. He fell over in the scope. It was a great feeling. I had spent 20+ days in the field, passed bulls, hiked countless miles, failed stalk after stalk… and then that day, it was just all over.

I like to think my old man was some how with me that morning.. because the feeling I had was so overwhelming, from the moment i sat up out of bed to start the coffee, to packing the bull back to my truck.

My wife tells me its not even about the kill, and that im addicted to the chase.. with out her this hunt wouldn't have been possible. This hunt and season will be one of the all time best i have. The time she allowed me to take for myself was more then generous. 20 days solo does alot of good for the soul. 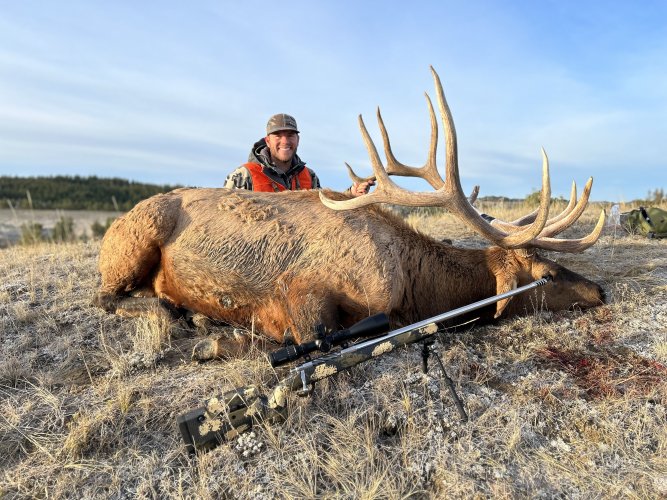 Helluva bull!! Sorry about the loss of your dad.

That's a great bull congrats. I have no doubt your old man's spirit was right there.

Very cool bull, it’s tough loosing Dad, he would be proud of you sticking it out and getting that bull.

Incredible bull great story sorry to hear about your loss. I'm being though he was right there.

Persistence paid off. Congratulations of a great bull.

That is fantastic. Congrats on an excellent bull. Great photos.

Great story of determination…congratulations on your success. Sorry for your loss as well.

Congrats on a great bull! No doubt someone was smiling upstairs!

Congrats! Fantastic bull. Way to stick with it.

Beautiful big bull, congratulations
You must log in or register to reply here.