What's on the smoker today?

Made a batch of jalapeño cheddar smokies the other day

Having some folks over for a party tonight. Started a brisket at 11:00 last night and put a whole bone in pronghorn hindquarter from a doe I shot last year at 8:00 this morning. 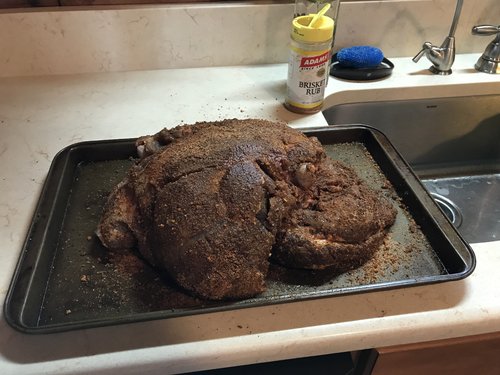 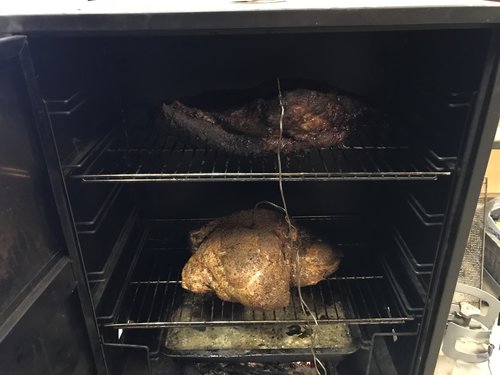 I will try to update with some cutting pics later. 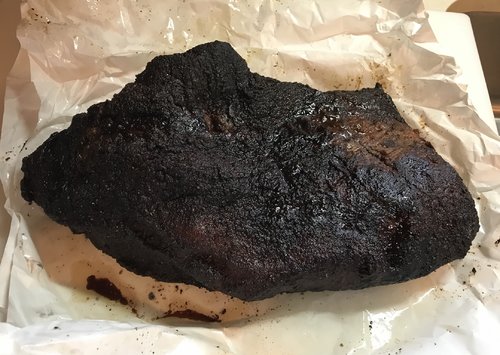 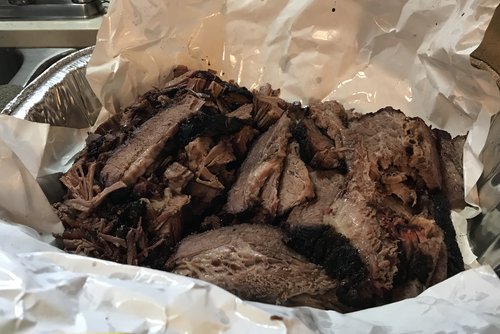 Ended up being hectic with the party and didn’t get a picture of the hindquarter. It ended up a bit dry but had good flavor and wasn’t tough. I injected it, but probably could have brined it longer (I only had it in brine for about 12 hours). I let it get too high of a temp before pulling it (I pulled it at 157). Should have pulled it at 150.

That’s the first time I really let meat rest properly with it wrapped and in a cooler for a little over an hour and that really helped the brisket, the hindquarter was still dry, but it might have still helped it, when I took it out of the wrap to cut it there was quite a bit of juice in the bottom of the paper.

Overall it was a success. Several folks told me that it was their first time to ever eat antelope and they thought it tasted good, I was probably the most critical of it being dry.

Couple pork rib racks and a pork belly...about 5 hours. Kids are on the way. 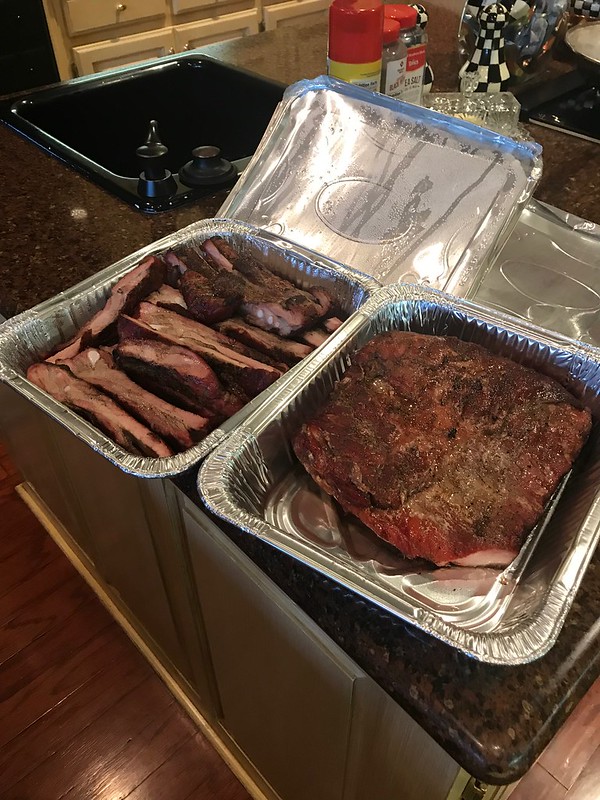 so I never think of snapping pictures, sure wish I would have today. I've had 2 whole hindquarters in the freezer since last fall (small doe). Finally broke one out last week and followed a recipe I found from Hank Shaw. https://honest-food.net/smoked-venison-leg-recipe

Dry brined for 10 days, washed and let sit in the frig uncovered for another day. Then threw on the smoker his this morning (hickory chips, gas smoker). Smoked between 180 and 200 for around 5 hours till it got to 135 degrees. Pulled and wrapped for 4 hours then sliced thin. Wow, it is fantastic. Turned out way better than I hoped for.

I was planning on making pastrami out of the other one, but I will have a hard time not making this again as it was so easy. 12 days in the making, but really only 20 minutes of work. 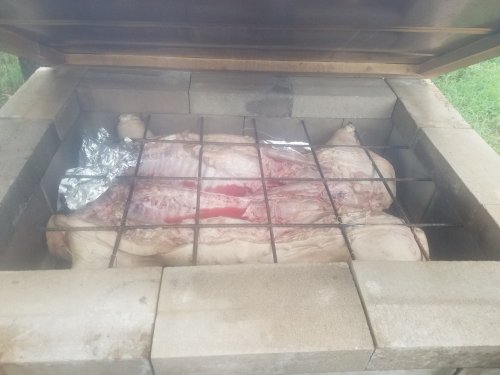 Just put a 175lb hog on the smoker for a party tomorrow.

Threw a bison rump roast on today for about 5 hours with a basic rub (smoked paprika, onion powder, garlic powder). Turned out good but I think gonna try something different next time. 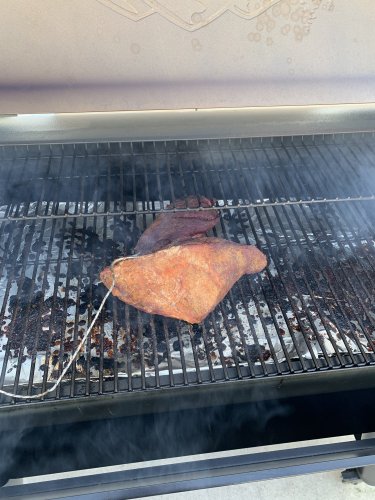 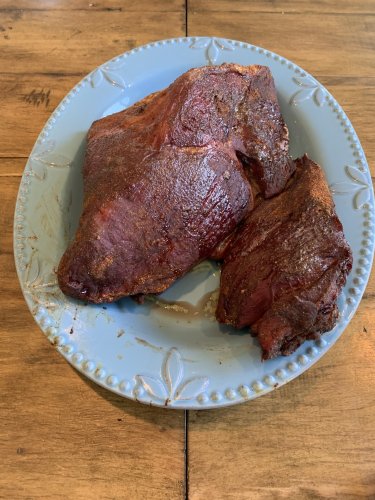 Put some baby backs and sausage to the side while I roasted a few batches of green chilies. Ribs still finishing, I hope they got some essence of the chili smoke.

Buddy upgraded his smoker, so I got a free one. It's my first smoker. Going to do some antelope jerky this weekend in it. Hope I don't mess it up too much. 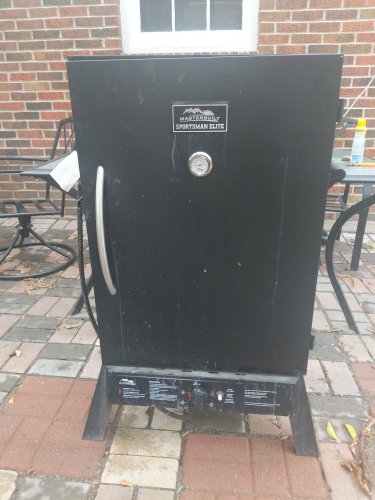 Ben Lamb said:
Buddy upgraded his smoker, so I got a free one. It's my first smoker. Going to do some antelope jerky this weekend in it. Hope I don't mess it up too much.

That is a good buddy. Nice smoker.
B

cgarner said:
That is a good buddy. Nice smoker.
Click to expand...

Yes on both accounts. Made some jerky this weekend and it was edible.

edible is the key 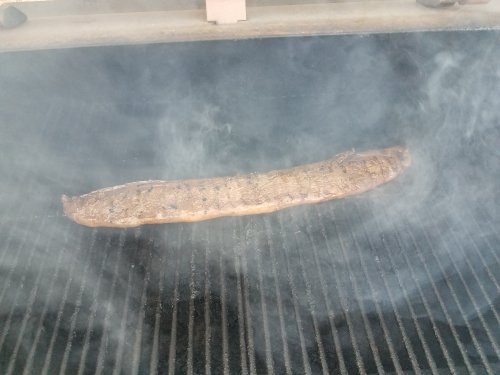 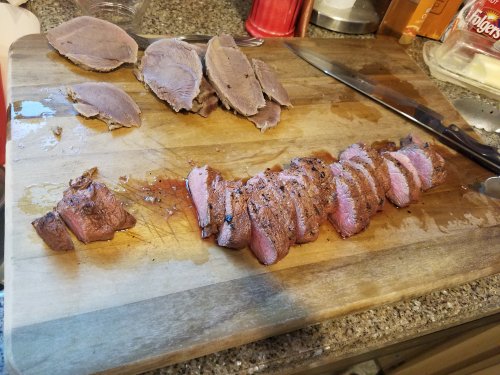 This thread is awesome. I usually break out the smoker every weekend. Everything from game roasts to whole chickens. SMOKE IT ALL. Smoked some antelope roasts last weekend. Didn't get any before or after pics, but I will next time!
B

Getting ready for elk camp. Cut up a large loin into chops & 2 small roasts. The chops are still on, but the roasts turned out nicely at 3 hours @ 225 with some apple. 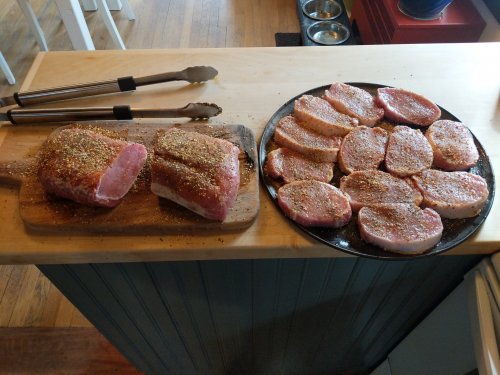 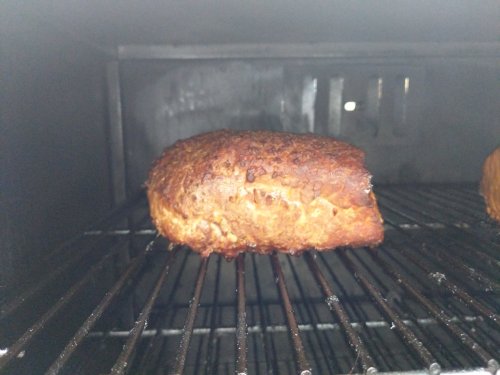 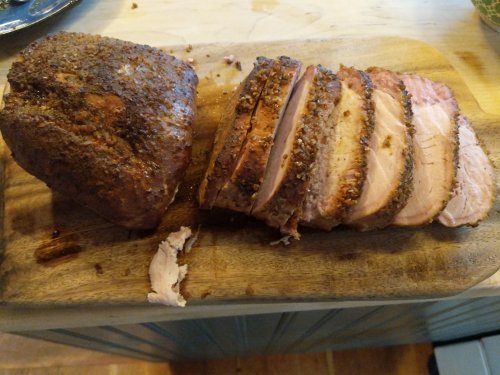 Ben Lamb said:
Getting ready for elk camp. Cut up a large loin into chops & 2 small roasts. The chops are still on, but the roasts turned out nicely at 3 hours @ 225 with some apple.

And where am I meeting you?
B

JLS said:
And where am I meeting you?
Click to expand...

@Schaaf 's place. Next Sunday night. Plan on 8 days.
B

12 Chops. They'll be vacuum sealed, 2 to a package and frozen for a quick meal or for porky sammiches while out & about. 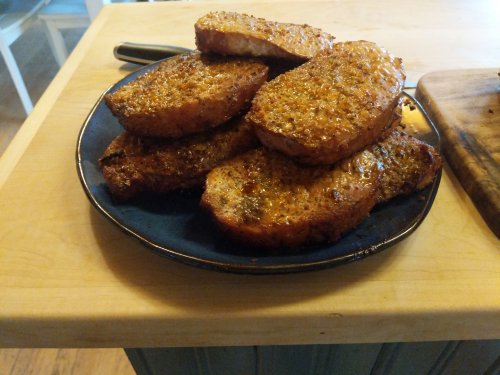