There's a marmot in my truck (revenge of flaviventris)

I know you don't put deer on the wall, but this guy may be deserving.
Click to expand...

Shoot man I already flushed him.

SnowyMountaineer said:
I gave it a rattle when I got home. Chirp chirp. Spare tire. I slowly drop it down and I could tell he wasn’t doing great, normally he’d have scurried to some impossible place right away. He gave me time to grab the cricket, snake shot ready, and line up.

Crack, and that’s that. Glad to put him out of his misery.


I actually kinda like marmots (liked them more last week). A familiar critter on every backpack trip in the Winds, Beartooths, etc as a youth. This one had an unfortunate intersection with civilization at a parking spot no one had been to since sometime last fall.

If you accidentally procure a marmot I have little advice, other than maybe start with a little more firepower, gaff ‘em, or find whatever a cable noose on a stick is called. Good night and good luck...
Click to expand...

It’s our most modestly priced receptacle.

Just in case I run for president of MOGA I don’t need a pic of me with a sub-trophy sized marmot floating around out there.

Is there a Ralph’s around here?

SnowyMountaineer said:
Just in case I run for president of MOGA I don’t need a pic of me with a sub-trophy sized marmot floating around out there.
Click to expand...

SnowyMountaineer said:
Just in case I run for president of MOGA I don’t need a pic of me with a sub-trophy sized marmot floating around out there.
Click to expand...

Once we were anchored up with a boatload of people sport fishing. I was standing on the sun deck just outside the wheelhouse. Suddenly a cloud of dust came blowing down the side of the boat. People were spitting, shaking out their hair and asking where the hell did that cloud of dirt come from?
Then here comes the flowers drifting by. Funny as heck! A brother and sister had snuck their moms ashes aboard figuring why not go fishing too.
N

Oh man, this story bring back flashbacks of a squirrel problem i had. When I can post I will share.

Sure glad I seen this, parking at a trail head to do some bear hunting today. There was one eyeing up my truck. Made sure I parked on the far side.
D

So I guess this happens every so often due to multiple posts ?
never would have thought
But one time trapping we got a big coon let it loose and it ran under truck we could grab it by 1 rear leg so we did and flipped it out into field just to have it hit the ground and run back under truck again and boy was it pissed took 3 times with every time us jumping up on truck kinda worried it would come after us( if I had a video it would have been great! 2 Idiots jumping around at night in a field )

thomas89 said:
Park that sucker in your garage, close it up, and let her idle!

Pro Tip: You have to leave the garage while the truck is running.

Ehh, maybe not if your garage has a bunch of clutter he could run out to and escape in. And/or he gets lodged somewhere you can't find in the truck.

Fuel prices these days though maybe the most expensive option.

Needs some fine tuning but I think I'm on to something.
Click to expand...

This would kill him for sure, but I'd be worried he'd get stuck in there and start stinking to high hell also.

Still waiting on the clean and cook...
O

I'm reminded of the story of the Wyoming rancher who caught the coyote that was giving him problems.
Tied a stick of dynamite to his tail, lit the fuse and turned him loose.
Sucker ran under the rancher's new pickup!
M

SnowyMountaineer said:
I went on a quick backpack trip for bears this week. Later on the evening of my return, while pulling into my driveway in a different car, I caught the faint outline of a monster on my rear truck tire. My heart sank, @neffa3 's ordeal coming immediately to mind.

I knew good and well it wasn't going to work, but I had to let my dog try out of respect to her Viking bloodlines. Freja, the Norwegian elkhound, is named for the goddess of war, beauty and like 10 other generic things that apparently didn't fit into the other god's skillsets. My Freja is more like the goddess of worrying and sleeping in other people's space. She gave it a good go, but got nothing other some angry chirps. The neighbor's GSP came along and gave about one sniff. Useless. Lucy the fun loving mutt. Useless.


Darkness came with quiet, both of which helped in locating the marmot. After dropping the spare tire, his favorite spots seemed to be the space above the rear wheel wells, on top of the gas tank, and on top of the exhaust heat shield. I popped him in the face a couple times with the red ryder...I don't know what I thought that would do, make him run away maybe? Yeah it didn't do anything.


After a couple hours I had him herded into a corner of the frame. He was slightly stuck, and slightly exposed. Here was my chance...

This part gets a little gruesome and I don't like an animal to suffer, but it is what it is and I value the integrity of my fuel line. I grabbed an arrow with a field point and jammed it as hard and I could into his head neck junction. I made it in but not lethally, and he chewed the end off the arrow. I watched as the defunct point dropped into a nook of the frame. As he continued to attack the broken shaft I jammed it down his throat 3-4" and pinned him in place. That chunk broke off, and I went in again, my hand now a few inches from his ferocious jaws. I had him dead to rights. He was bleeding pretty good and seemed to give up. I left him to pass and came back a half an hour later. I gave him poke and he didn't respond. It was probably midnight so I figured I'd go to bed and pull him out in the morning.

I come out the next morning to find the back of the arrow shaft chewed off, laying on the ground. No marmot. So with about 4" of carbon somewhere in his front half, he drug himself back up in there. Some tapping here and there elicited demonic chirps. You've got to be effing kidding me. That was TWO DAYS AGO. I take the dog out today and sure enough, "chirp chirp", it lives. I don't have a pellet gun; in hindsight I'd have hit him with bird shot out of the .22 pistol when I had him pinned with the arrow.

I can't poison, too many neighborhood dogs. If I can get him back to being slightly exposed I'm going to have the bird shot ready. Either out of the cricket or Colt buntline depending on his location. The other thing I thought of was fashioning a short gaff hook set-up, the downside being the resulting pissed marmot attached to the thing I'm holding. My dad suggested a power washer, which is somewhat appealing.

. I typically kill them to get them to stop tunneling under my out buildings. Funky little creatures 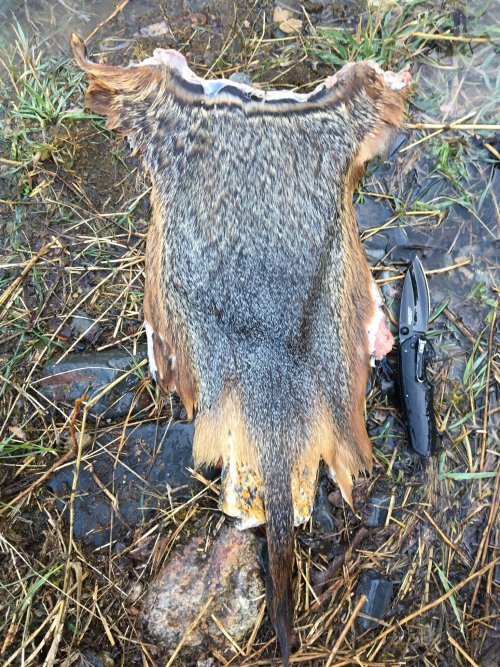 FoodIsMemories said:
Can I just,

The fly fisherman in me is eyeing that up for zonker strips. Or some killer smallmouth jigs.

R.K. said:
The fly fisherman in me is eyeing that up for zonker strips. Or some killer smallmouth jigs.
Click to expand...

marmot or woodchuck flank hair makes absolutely great dry fly tails. The hair is long, thin, and stiff, so it sits on the water really well and is very durable.
You must log in or register to reply here.

Said goodbye to our "Poochie-Dog"
2 3

Shooting the Grendel's, stage 2 fire restrictions, and a jerk in a Subaru.

This is it for me, guys, I might be done with shooting things.
2