That Was A First!

I was out fishing last Saturday evening. I had just landed this really pretty male rainbow in all his spawning color glory. Just a couple of casts later my ultra light rod doubled over and I thought I'd hooked Moby Dick or something. Suddenly the water erupted and up came a muskrat. I'd hooked the poor little bugger right near the end of his tail. We had an epic battle for about 10 minutes on my ultra light until he finally got tired enough I was able to bring him to shore. I cautiously reached down with my forceps, grabbed the hooked and gave it a quick jerk. Fortunately the hooked popped right out, and I was glad the muskrat didn't spin around and try to bite me. The second he was free he jumped right back in the water, swam about 5 feet and dove into a hole in the bank that I hadn't noticed before. I actually felt a little bad as that couldn't have felt that good. However if you are a muskrat and you are going to get hooked, I suppose the tail is the best place. I had seen him swimming around while I was fishing and he had come fairly close a few times. I really hadn't paid that much attention to him as I was concentrating on fishing. Somehow he had slipped in unnoticed until my jig hook met his tail. The only other really odd thing I've ever hooked by accident is I once snagged a large dragon fly right out of the air. I'd like to say it was on purpose but it wasn't. I reeled it in, put it more securely on the hook and cast him back out. In less than a minute I caught a catfish on that dragon fly. I guess it just wasn't that bugs day. 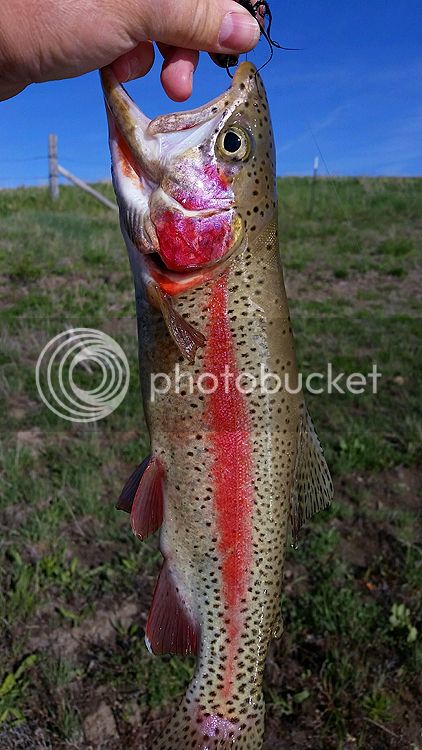 Pretty fish and an even better story.

When I was a kid we'd gut fish and throw their entrails back into the water with a hook in them and try to catch seagulls that would scoop them up. Had a few that grabbed the guts, but was never able to set the hook on one.

Nice looking fish. I caught a duck one time, totally by accident. I was fishing a reservoir from a boat and it was swimming around some cattails that I was casting by. For some reason the crazy thing thought it was a good idea to take off right as I made my cast and it hooked it right in the tip of the wing. Luckily, we got it loose without hurting it too badly.

Striking colors on your fish. Fun story regarding the furry catch.

At any time did either the Captain or Tenille flash through your brain during your epic fight?

A similar thing happened to me in Canada. My buddy and I carried a our canoe through a mile of swamp to get to a tiny lake supposedly full of walleyes. The rumor was true and we were having fun catching them on nearly every cast along with the occasional nuisance pike (as Minnesotans we are obligated to hate pike.) At one point I saw my line twitch and set the hook on something that didn't budge. I immediately looked at my friend and said "whatever this is, it's BIG!" For the next 10 minutes I held on for dear life as whatever was on the end of my line towed me around that little lake, by buddy furiously paddling trying to keep up so it wouldn't spool me. We got the canoe over it and a few bubbles came up, which I thought was odd. It was also fighting like no fish I've ever caught. Soon after it towed us into a small bay and I immediately saw the beaver hut and knew what had happened. Seconds later line was sizzling off of my reel as he made a beeline towards the hut. I could see my green jig stuck in his side. There was nothing I could do but break the line as he crawled into the entrance to his home. I also felt a little bad but there was nothing I could do. It was just bad luck on the beavers part.

I've also caught various bats, birds, and seagulls. My least favorite thing to catch are the softshell turtles in the rivers around here. I hate those things!
B

Nowiser, your turtle comment reminded me of one time when I was fishing with a friend in eastern Montana for northern pike. IN a moment of boredom he snagged a muskrat by the front foot. We thought it would put up some kind of fight but it just came right in. He was able to pop the hook out with his pliers and the rat swam off like nothing had really happened. We were both really surprised at how chill the muskrat was. Anyway, a couple hours later my same partner snagged a large painted turtle by the hind foot. Man, all heck broke loose. That turtle fought like no other. Every time it would get close to the boat the turtle would make another run for it. He ended pulling it up into the boat eventually. That little bugger was ticked and out for blood. We were hopping all over that boat trying to avoid getting bit. I had no idea that painted turtles could be even remotely aggressive, but this one was. It took us a while to get the hook out and get the turtle back in the water. We decided that day that turtles were best left alone while fishing. I'm just glad it wasn't a 20 pound snapping turtle.

On Westfly I heard about an infamous bald eagle that used to steal people's fish as they were reeling in. I think it was in Oregon. I remember seeing a picture taken from a guy in a float tube with the eagle flying away with his fish while still hooked. Would love to track that picture down again...

I caught a seagull once on a #8 Elk Hair Caddis. The fish were pounding it, and it was my last fly (mosquito repellent and 5x tippet are a bad mix). I saw the seagull hovering over it and I thought "oh no you don't!" and started stripping it in fast. That %&(#$# SOB swooped in and grabbed it, and I found myself sitting in my float tube playing a seagull on a 4 weight fly rod.

Every time he hit the end of the line he would pile up into the water. I finally broke him off and cursed him for taking my last caddis.
B

Loving these stories. Hope to see a few more before the thread dies.

I've snagged soft shells out of the river. Also, on a trip to AL, there was a small gator that snatched my BIL's fish. He snapped the line and ate it, hook and all.

I have been bit by a painted turtle before. It drew blood and surprised the heck out of me!

We've caught a couple of snapping turtles before. The one that sticks out most in my mind was a big one I got while fishing for carp when I was probably 8 years old. Somehow my dad was able to remove the hook from its mouth with nothing but a stick and a can opener. I'm not that brave. The softshell turtles are almost as bad, hissing and snapping at your hands while trying to pry the hook out of their beaks.

One bird I never want to catch is a loon. We've had to change fishing spots in the past when they kept stealing the minnnows off of our jigs. Bait is too expensive and we didn't want to risk hooking one. I once was finishing up a SCUBA dive in northern MN and had taken my tank off when a loon and her little ones swam by. They have no fear of fishermen when they are in their boats. I jumped back in the lake for a closer look and was immediately attacked. My wetsuit protected me, but also prevented me from diving underwater to escape and swim back to the boat. I was so happy to have goggles on. Those birds are big and their beaks are sharp!! Of course my "friends" in the boat were laughing too hard to pull me back in, away from my attacker. It was a lesson learned and I deserved it. It was amazing and frightening to see the bird go from complete indifference while we were in the boat to attack mode as soon as I hit the water.

WOW! Crazy story but holy smokes, THAT is a gorgeous trout!!!

Those colours are amazing!
Cheers
Richard
You must log in or register to reply here.

The Dangers of Ice Fishing Poles